Up in smoke: We need to pay more attention to disappearing trees

Trees are dying at unprecedented rates. Can we rethink conservation before it's too late? 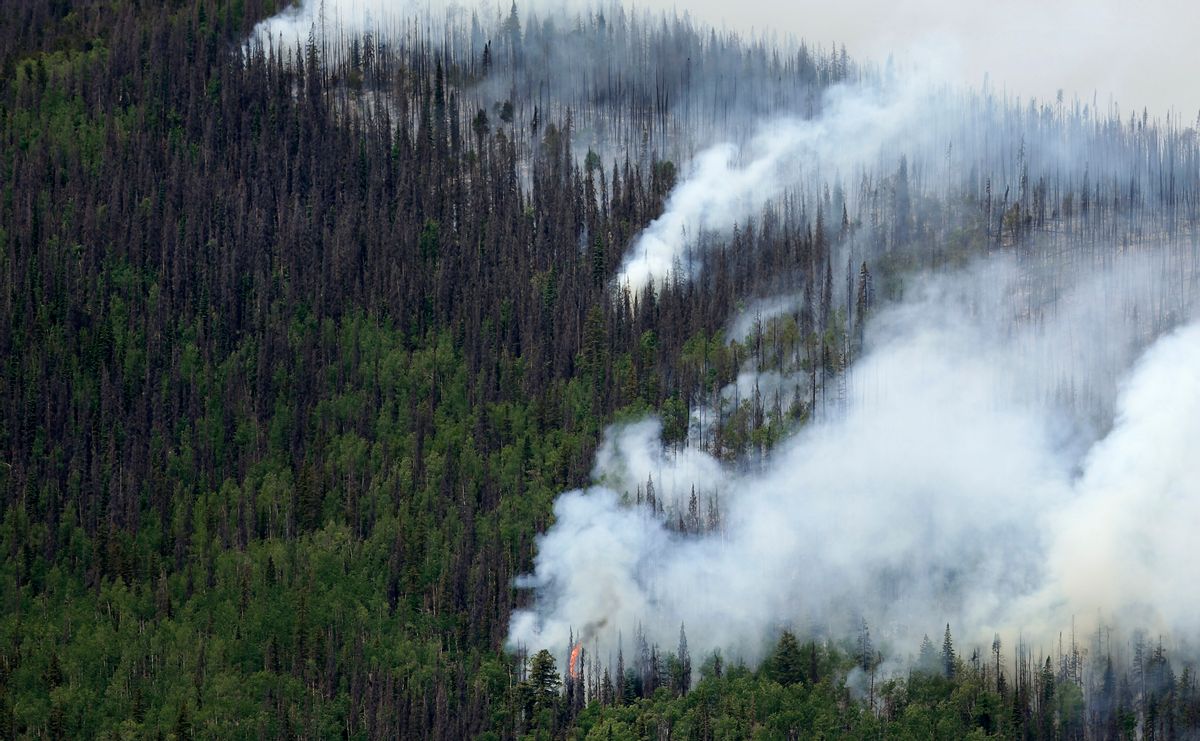 Each year, the Earth’s trees suck more than a hundred billion tons of carbon dioxide from the atmosphere. That’s an impossibly huge number to consider, about 60 times the weight of all the humans currently on the planet.

Our forests perform a cornucopia of services: Serving as a stabilizing force for nearly all of terrestrial life, they foster biodiversity and even make us happier. But as climate change accelerates, drawing that carbon out of the air has become trees’ most critical role.

Absorbing CO2 is key in a time where each year matters greatly to our ability to avert the worst effects of climate change: Carbon “sinks,” like the wood of trees and organic matter buried in dirt, prevent the gas from returning to the atmosphere for dozens or even hundreds of years. Right now, about a third of all human carbon emissions are absorbed by trees and other land plants — the rest remains in the atmosphere or gets buried at sea. That share will need to rise toward and beyond 100 percent in order to counter all of humanity’s emissions past and present.

For trees to pull this off, though, they have to be alive, thriving, and spreading. And at the moment, the world’s forests are trending in the opposite direction.

New evidence shows that the climate is shifting so quickly, it’s putting many of the world’s trees in jeopardy. Rising temperatures and increasingly unusual rainfall patterns inflict more frequent drought, pest outbreaks, and fires. Trees are dying at the fastest rate ever seen, on the backs of extreme events like the 2015 El Niño, which sparked massive forest fires across the tropics. In 2016, the world lost a New Zealand-sized amount of trees, the most in recorded history.

The declining health of trees globally is starting to have profound effects on Earth’s carbon cycle. The rise in atmospheric carbon dioxide has been picking up speed over the past few years, even though human CO2 emissions have flattened. The net effect: Climate change is starting to accelerate.

Some tropical forests — in the Congo, the Amazon, and in Southeast Asia — have already shifted to a net carbon source. That means they emit more greenhouse gases than they absorb, worsening the climate problem worldwide. And signs are emerging that the health of California’s forests is fading, too.

The world’s treescape is undergoing a significant shift in real time. And with the situation getting particularly desperate, conservationists are beginning to rethink which species belong where. They’re even considering speeding up forest transitions, so we can get to the next phase where trees are soaking up massive amounts of carbon again instead of bursting into flames.

Forests are our last, best natural defense against global warming. Without the world’s trees at peak physical condition, the rest of us don’t stand a chance.

The planet is warming, but it isn’t doing so evenly. The icy poles are heating up faster, throwing off the balance of global air circulation. The storms that ride the now-shifted jet stream have deviated away from their historical paths, resulting in an expansion of the dry zones that surround the tropics. In short, a disruption of rainfall patterns across the globe is forcing trees to migrate.

Even at relatively low levels of climate change, where the Earth’s average temperature increases by fewer than 2 degrees Celsius, the range of North American tree species will shift northward at a rate of about two miles per year.

Forests simply can’t migrate that quickly. Take the jack pine, a species that the fossil record shows can adapt relatively fast to climatic shifts. Yet even for the jack pine, the current rate of warming would force it to migrate six times more quickly than it ever has before.

Given all of this, it’s not surprising that a recent study shows that, should warming continue apace, virtually all U.S. forests are at risk of climate-related shifts this century.

For a clear window into how forests are changing in real time, look at a temperate place like California. In recent years, droughts have become more frequent as more of the state begins to take on a desert-like climate. Since 2014, more than 129 million trees have died in California. In aerial views, large swaths of brown pockmark previously pristine canopies. The Golden State’s forests have experienced a ten-fold increase in mortality in recent years, linked to drier and warmer weather and a beetle infestation made worse by the changing climate.

California’s arboreal apocalypse is being exacerbated by the raging wildfires that the state’s forestry department helped stoke. Unlike sub-Arctic and tropical forests, temperate ones are often densely populated with people. A state-funded watchdog report showed in February that California’s forests are sorely lacking prescribed burns, which remove overgrowth and dead trees. Seven of the 10 largest fires in California history have occurred since 2003, including December’s Thomas Fire, the largest on record and the state’s first wintertime megafire. The fires, of course, are reason enough to worry, but recent studies suggest California trees are struggling to regrow naturally after the blazes.

“Many forest ecosystems are not well equipped to do battle with climate-driven changes,” says Stella Cousins, a forest ecologist at the University of California, Berkeley.

She adds that across the globe, humans degrade forests through land clearing for agriculture and bad forestry practices. Ecosystems, therefore, are already fighting an uphill battle to thrive — and adding warming into the equation makes their ability to flourish nearly impossible.

For tree lovers — and for scientists who spend their lives in the forest — all of this bad news is a punch to the gut.

Yolanda Wiersma, a landscape ecologist at Canada’s Memorial University, is rattled, but she remains optimistic that forests will merely change — and not vanish entirely.

“Our forests in 100 years will not look like our forests today,” she says. “We’re not going to see forests disappear. They’re resilient; they’ll adapt in some way. They’re just going to be different kinds of forests than what we know now.”

Take the sub-Arctic boreal forest in Newfoundland, where Wiersma works. Trees there are, on average, growing taller now as the growing season lengthens. That’s expected to soon lead to bigger fires — because there’s simply more to burn — but also faster regrowth and a new mix of species in the aftermath. It will produce a forest that, according to Wiersma, “we haven’t quite seen before.”

It’s emergent ecosystems like the warmer, less frozen Arctic, that are giving some ecologists, like Wiersma, hope that forests will be able to muddle through. But to ensure forests’ survival amid such rapid change, some scientists believe further human intervention is necessary.

A set of conservationists are rethinking how we approach forests. They considering tinkering with the ecosystems in various ways, including introducing novel species, replanting forests with climate change in mind, and even planting fast-growing species just to burn them for energy.

All of these strategies amount to a radical departure from the static view of forest conservation that has dominated for decades. It’s a view that considers forests as inherently changing instead of inherently stable — at least on timescales that matter to humans.

Wiersma is apprehensive about these sorts of radical approaches. “If we’re going to try anything different,” she says, “it should be done very cautiously.”

But some forests simply aren’t going to be able to handle the next few decades on their own. A recent study used computer models to test the inherently changing point of view. Researchers looked at a forest ecosystem in a remote part of British Columbia that’s susceptible to fires and insect outbreaks. They found that artificially boosting tree diversity increased the forest’s capacity for regrowth by up to 40 percent. It’s an example of what forest ecologists call “assisted migration,” introducing novel species that are expected to do well in the years ahead.

In Minnesota, conservationists aren’t just modeling it with computers. They’re actually doing it.

At the southern edge of the boreal forest, spruce, fir, birch, and aspen dominate — but their days are likely numbered as warm, dry summers become increasingly commonplace. Researchers at the University of Minnesota-Duluth partnered with the Nature Conservancy to plant 100,000 seedlings of native species more representative of the forests of Minnesota’s future — oak, pine, and basswood — on 500 acres of public lands. While they’ve grown in the region before, those species are still relatively rare, so the researchers want to study how the trees fare in years to come.

It will likely take decades to study the ramifications of even this small experiment — and by that time, the climate will likely have moved on. That inherent pressure adds both urgency and controversy to bold actions like these.

Another idea, called bioenergy carbon capture and sequestration (BECCS), involves planting massive swaths of the planet’s arable land with quick-growing trees and other vegetation, and then burning the plant matter for fuel while capturing the resulting carbon dioxide.

It’s controversial on the scale that would be necessary — an area equivalent to the size of India would be needed by 2100 to remove enough carbon from the atmosphere to help stabilize the rise of global temperatures. New studies show it may have compounding negative effects for surrounding ecosystems, but BECCS continues to show up in climate change mitigation strategies simply because humans haven’t yet invented a technology as efficient as trees to suck CO2 out of the sky.

With a problem as big as the potential death of many of the world’s forests, the worst thing we could do is nothing. We’re well on our way to a planet in which forests have radically transformed, but that shouldn’t be mistaken for the end of the story. Trees and humans are now locked in a mutual struggle for survival, and a future that’s good for forests and people will require profound adjustments in the way we think.

Trees can teach us many lessons, including encouraging long-term thinking. “We’re not ready for this rate of climate change,” Wiersma concludes from watching what the current rate of warming is doing to forests.

This post has been updated to clarify BECCS details.