Longtime CIA analyst Melvin Goodman: Russian hacking isn't as dangerous as the "dumbing down of this country" 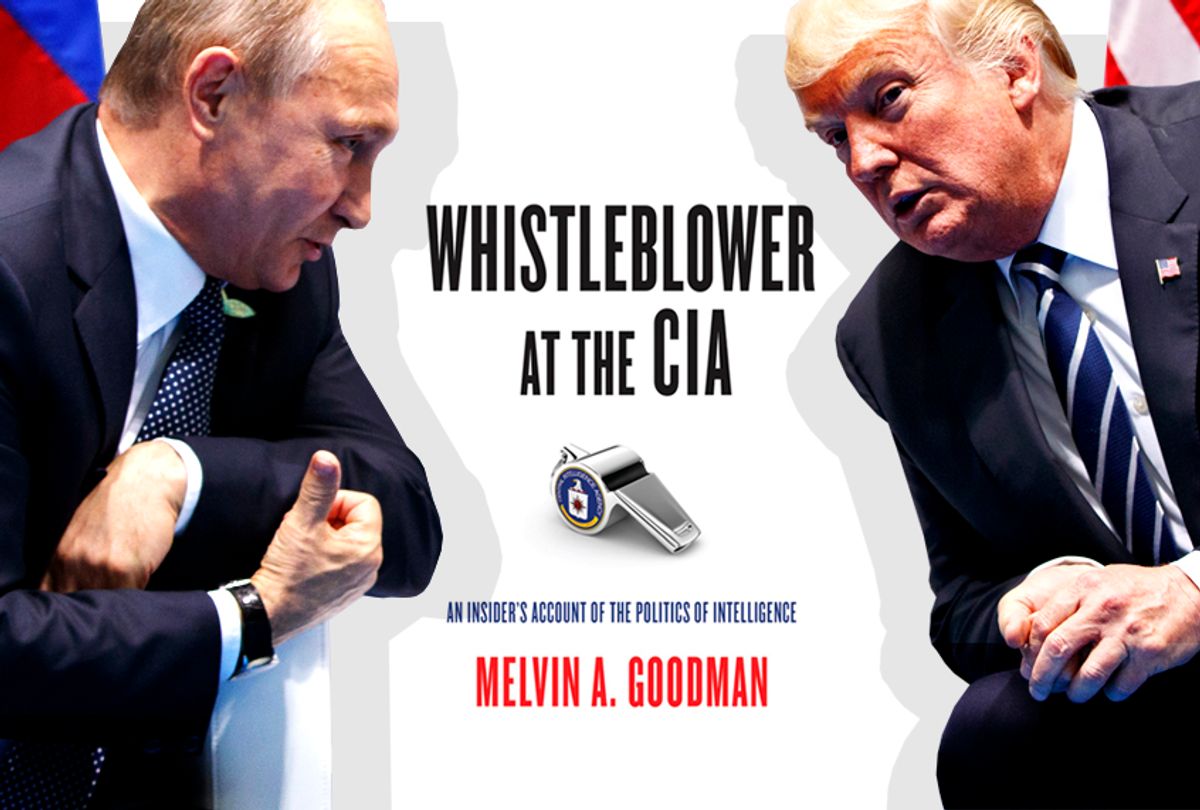 The cauldron that is the Russia scandal and its related tendrils -- including possible money laundering and likely obstruction of justice -- has boiled over. In recent weeks it has been revealed that Robert Mueller is investigating a secret meeting between Trump ally Erik Prince and a Russian contact in the Seychelles, additional charges have been added to Paul Manafort and Rick Gates' indictments, 13 Russians and various American assets have been indicted for interfering in the 2016 presidential election, and Donald Trump has engaged in what looks like witness tampering. Adding to this imbroglio, adult film star Stormy Daniels, who was apparently paid $130,000 in hush money by Trump's personal attorney, is threatening to reveal intimate photos and other evidence of her affair with the president.

Trump and his associates are not acting like innocent people. Their behavior suggests a deep level of culpability in reference to the 2016 presidential election as well as the other illegal behavior that Mueller has already and will continue to uncover.

What does this new information suggest about Mueller's investigation into Trump and his inner circle? What of the claim by Trump's defenders that he is a victim of a plot" by the so-called Deep State? Has the success of Russia's efforts to undermine American democracy been overstated? Is China, rather than Russia the true beneficiary of Trump's foreign policy and other failures?

In an effort to answer these questions I recently spoke with Melvin Goodman. He was an intelligence analyst at the CIA for 24 years, specializing in relations between the United States and Russia. Goodman is the author of several books including his most recent, "Whistleblower at the CIA."

Given your four decades of experience as an intelligence analyst with the CIA, and your work with the State Department and other agencies, how do you view the Russia scandal and Donald Trump?

His effort to hide the story, and his treatment of Putin and Russia, suggest that with all that smoke there's some fire. I don't know if it's money laundering. I don't know if it's some vulnerabilities that he's been compromised in Russia, but his treatment of Putin makes no sense. The Manafort indictment is damning. [Manafort's] vulnerability to Russia and then the fact that he danced into the Trump campaign and becomes the campaign manager, and by the way is willing to work for nothing at a time when he is in financial crisis. And then there are [Jeff] Sessions and [Jared] Kushner, who have lied about foreign contacts. On top of that there are a hundred or so people in the White House who the FBI and the Justice Department can't finally clear for security documents. In total ,this all points to a level of corruption like we've never seen before.

The Republicans are hanging on to Trump for dear life. This is their golden opportunity -- the House, the Senate and the White House -- to do things they always wanted to do. I don't know what it would take for Republicans to realize that Trump has damaged and will continue to undermine our democracy.

As the full scale of Russia's interference with the 2016 election became clear and Mueller's investigation has uncovered alleged wrongdoing by Trump's inner circle, there has been much discussion of the "deep state." Can you explain this concept in more detail?

The idea of a "deep state" in the United States is totally ludicrous. You'll hear it in cases where you have strong military leadership or strong authoritarian leadership such as Turkey. We witnessed it in Egypt. We witnessed it in Pakistan. The idea in the United States that these very conservative institutions -- I was inside the CIA, I was inside the Department of State and the Department of Defense at the highest levels -- that they would be part of some "deep state" does not make any sense. They are very conservative institutions.

I think the Trump election has created such division and polarization that his defenders have come up with the idea of a "deep state" that's aligned against him. The FBI and the Justice Department are now led by Republicans appointed by Donald Trump. The CIA is led by a Republican appointed by Donald Trump. The military is an exceedingly conservative institution, particularly at the highest level. The idea that somehow there's a conspiracy among these institutions and that they've coalesced around the idea of compromising Donald Trump makes no sense whatsoever.

I would also say this about the Russian hacking: It is not what the Russians did that is so shocking. It’s that so many Americans could believe such nonsense that was put out there on social media by the Russians. I look at the Russian hacking as just part of a disinformation campaign that the United States and the Soviet Union -- and now Russia -- have been waging against each other since the end of the Cold War.

The fact that the Russians could put out these bizarre stories and have a certain amount of success is shocking. You have to wonder about the dumbing down of this country. What has happened to this country in terms of citizens' understanding of  the political process and how politics really works? That's what's worrisome. The idea that many tens of millions of people voted for Donald Trump is shocking on another level as well.

The Russians interfered in the 2016 presidential election with the goal of electing Donald Trump. That now seems clear. America's intelligence agencies have been definitive in that conclusion because, after all, the United States is an expert at meddling in other countries' elections and destabilizing governments. That is a fact left out of the mainstream news media's discussions of the Russia scandal.

But I also see a lot of hysteria about Russia too. That's why I'm of two minds about all this. People say Putin was incredibly successful. I don't think he was, because I think part of Putin's plan started as an active measure to undermine the stability of our democracy. Then it became, because of his contemptuous attitudes toward Hillary Clinton, a plan to defeat her. Putin then saw an opportunity to do something for Donald Trump, but it was designed to create a better relationship between Moscow and Washington. I may be naive about that, but that's what I genuinely believe. I think Putin sees his own value in terms of having equal stature with the United States. It's more than just a zero-sum game.

I don't see Russia as all that menacing in terms of geopolitics.  The country that I worry about is China. What Trump has really done is to fortify China, certainly in Asia and in Third World regions as well. While the United States is wasting resources on military interventions that are essentially unwinnable, China is being a good mercantile state which has been very successful with investment and infrastructure policy. There's no sense of vision in this country.

You have spent 40 years in the CIA and other parts of the United States government during the Cold War and then the early years of the conflicts in Iraq and across the Middle East. I have argued that you can trace a direct line from 9/11 and the failures of American empire directly to the rise of Donald Trump. If America had not gotten mired in those endless wars, where would we be today?

I would start with the Eisenhower Farewell Address: It’s money that we spend on tanks and planes and armor that we don't need, it’s money that we can’t spend on the domestic economy and that we're spending -- the sweat of our labors and the ideas of our professors and our researchers -- and we're depriving industry of the resources we need in terms of investments. So then if you fast forward and look at the unwinnable wars -- Vietnam, Iraq and Afghanistan and the trillions of dollars that we've wasted -- and then you look at our rotting infrastructure, a bridge can collapse in Minneapolis-St. Paul and cause many deaths, as it did, and there is no real response in terms of infrastructure. Then you look at what China is doing in terms of infrastructure, not only the new Silk Road but what they're doing in China itself, and you realize we could have had this incredible investment in America.

Let's assume that all the evidence points to Trump colluding with Russia. The Republicans choose party and partisanship over country. Nothing happens to Trump. Now Putin has destabilized American democracy, there's a crisis, and China steps into that vacuum and really asserts itself as the dominant world power. Is that fear exaggerated?

Well, we're making China great again. That’s what we’re doing. China practices a four-modernization principle, with the military as the fourth modernization. They put science and technology and industry and agriculture before the military. Whereas if you look at the United States in terms of resource strategy, the emphasis is on the military. Just look at the 2019 proposed budget. It may be dead on arrival when it gets to Congress, but this is the way Trump thinks. And throwing all these resources into the military and allowing greater influence on the part of the military is a setback for American interests. And the "America First" strategy really opens up the entire geo-strategic chessboard to China.

Is there anything that gives you hope about America in the age of Trump?

The hope that I have is that Americans realize a major mistake was made by their lack of attention and cynicism about politics which allowed the election of someone who was unfit to serve. When I took part in the women's march in January last year, when I took part in the science march in April of last year, I got the feeling of real activism. I see the hope that Americans realize that they could lose their democracy.

It reminds me of that remark which was yelled out to Benjamin Franklin when he was leaving Constitution Hall in Philadelphia. "What have you done in there?" And he said, "We've created a republic, if you can keep it." We never had a full democracy. The founding fathers never intended to create a full democracy because, frankly, they didn't trust the American people to keep someone like Donald Trump out of the White House. If Americans don't seize the instruments of our democracy, and if they don't rebuild the guardrails of our democracy, we've created a lot of problems for the next generation.