NYC public radio station buys Gothamist: But what about its unionized journalists? 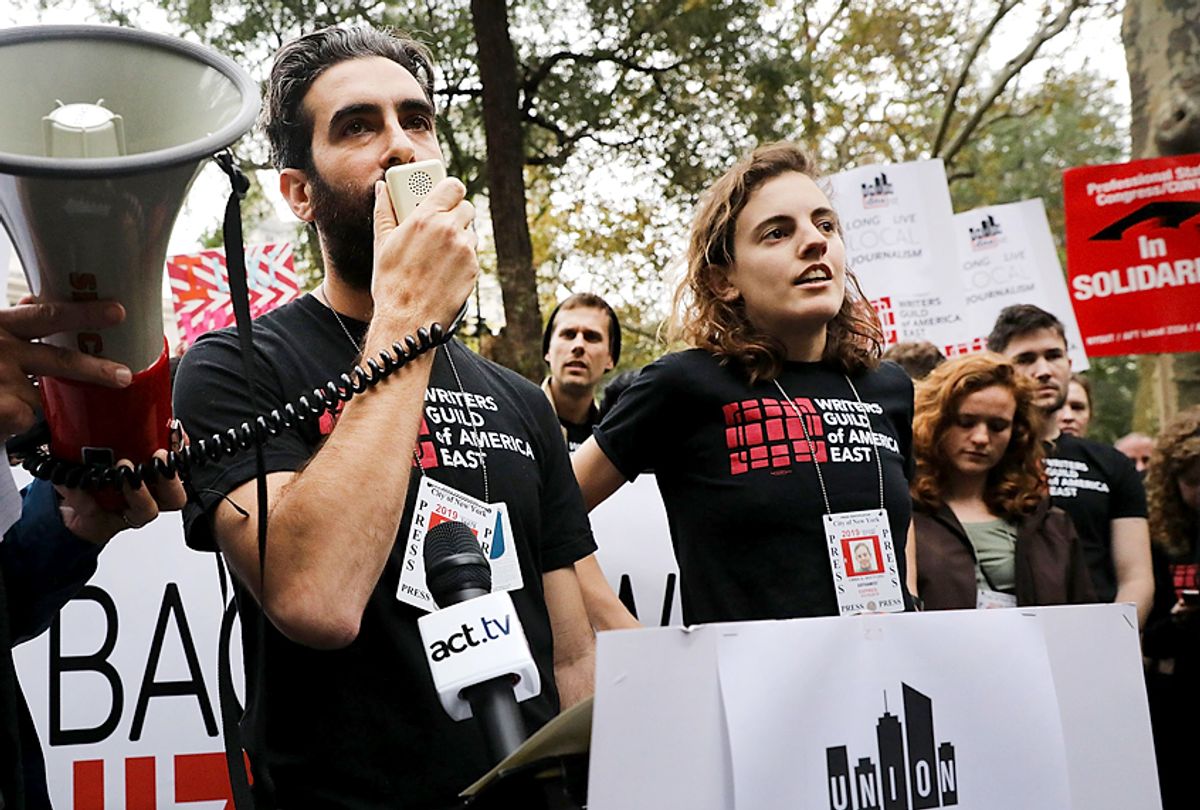 Dozens of Gothamist and DNAinfo employees and supporters rally to support the journalists and other staff members who lost their jobs at the publications. (Getty/Spencer Platt)
--

In its recent announcement about radio station WNYC's purchase of the now-shuttered hyperlocal news sites Gothamist and DNAinfo, New York Public Radio CEO Laura Walker hailed the sites “as a source of trusted local news.” She added that amid a decline in local journalism, “we remain committed to strong, independent reporting that fills the void.”

NYPR, the entity that owns and operates WNYC -- the NPR affiliate in the nation's largest city -- joined two other public-radio nonprofits in the deal: WAMU in Washington, D.C., KPCC in Pasadena, California.

While the NYPR press release described the “assets” that had been acquired, there was no mention of the actual journalists who had earned that reputation. So the question loomed large for former Gothamist writers: Was WNYC just buying a brand name?

Also missing from the announcement was any mention of the controversial way Gothamist and DNAinfo had been shut down. A few months ago, their owner Joe Ricketts abruptly halted operations and took down the sites, a week after employees had voted to join a union.

But New York Public Radio did give Ricketts the last quote in the press release, allowing him to put a civic-minded face on his hardball move that resulted in more than 100 layoffs in New York and across the country at the sites' regional spinoffs.

“The most important thing for me was to make sure the assets went to a news organization that would honor our commitment to neighborhood storytelling,” Ricketts said. “I can’t think of a better home for these sites and their archives than WNYC and public radio stations KPCC and WAMU.”

At the time of the shutdown, Ricketts cast the move as merely a business decision, but a month earlier he had blogged that “unions promote a corrosive us-against-them dynamic that destroys the esprit de corps businesses need to succeed.”

Over the years, Ricketts and his wife have given around $40 million to Republican candidates and PACs. A particular favorite has been Wisconsin Gov. Scott Walker, whose rise to national prominence came thanks to his successful scorched-earth campaign against his state’s public unions.

In addition to not disclosing how much Ricketts was paid, the NYPR announcement failed to disclose the identity of the two donors who funded the acquisition. It also left as an open question the fate of all the Gothamist writers who had voted for a union and were seemingly rewarded with immediate pink slips.

Word of the high-profile deal comes as WNYC, a venerable and influential New York institution, finds itself trying to regain control over its own narrative after multiple claims of sexual harassment and bullying by some of the station’s top talents.

A number of the charges went back several years and revealed a culture in which employees who came forward with abuse claims were ignored or even fired as alleged abusers were kept on. In a few instances, the victims described taking cases directly to Laura Walker herself. Published reports indicate that on occasion the station resorted to nondisclosure agreements to keep the allegations out of the public eye.

The scandal broke back in December with reporting in New York magazine by Suki Kim about her firsthand experience as a guest with John Hockenberry, the former host of WNYC’s “The Takeaway.” Months before that article was published, Hockenberry had retired with a celebratory send-off by the station. Kim’s reporting included detailed accounts from other WNYC employees who went public about their experiences with Hockenberry. The former host issued an apology in a statement.

At a public board meeting in December, Walker said she was “profoundly pained and sorry,” conceding that “for the last several years, I think we’ve prioritized growth and content and programming over investment in some of the processes and people.” The New York Times recently chronicled the station’s meteoric rise from 1995, when it had an $8 million budget and 1 million weekly listeners, to today, when its monthly audience tops 26 million and its annual budget is $100 million.

Also in December, longtime WNYC hosts Leonard Lopate and Jonathan Schwartz were fired over allegedly inappropriate conduct. Yet a vocal group of WNYC’s listeners has rallied around Lopate, suggesting that he became a scapegoat after the bruising reporting by New York magazine.

Dean Cappello, the station’s chief content officer who oversaw the shows caught up in the roiling scandal, was removed from his post and now is acting only in an advisory capacity, reporting directly to Walker. Sources inside the station said he has not been seen there since the announcement of his demotion.

Several current WNYC employees, who did not want their names published because they were concerned about violating company policy, said there was some optimism that Walker’s efforts at an internal reset are producing tangible results.

“It’s clear Laura was completely blindsided by this,” one longtime staffer said. “It was her own fault because she lost that boots-on-the-ground sense of things, but now she is really working hard to right the ship.”

But the upbeat assessment was not universal. “I just am not buying it that we have turned a corner,” another employee said. “All the leadership that was here when this all played out are still here.”