In Brooklyn, National Walkout Day is about more than school shootings 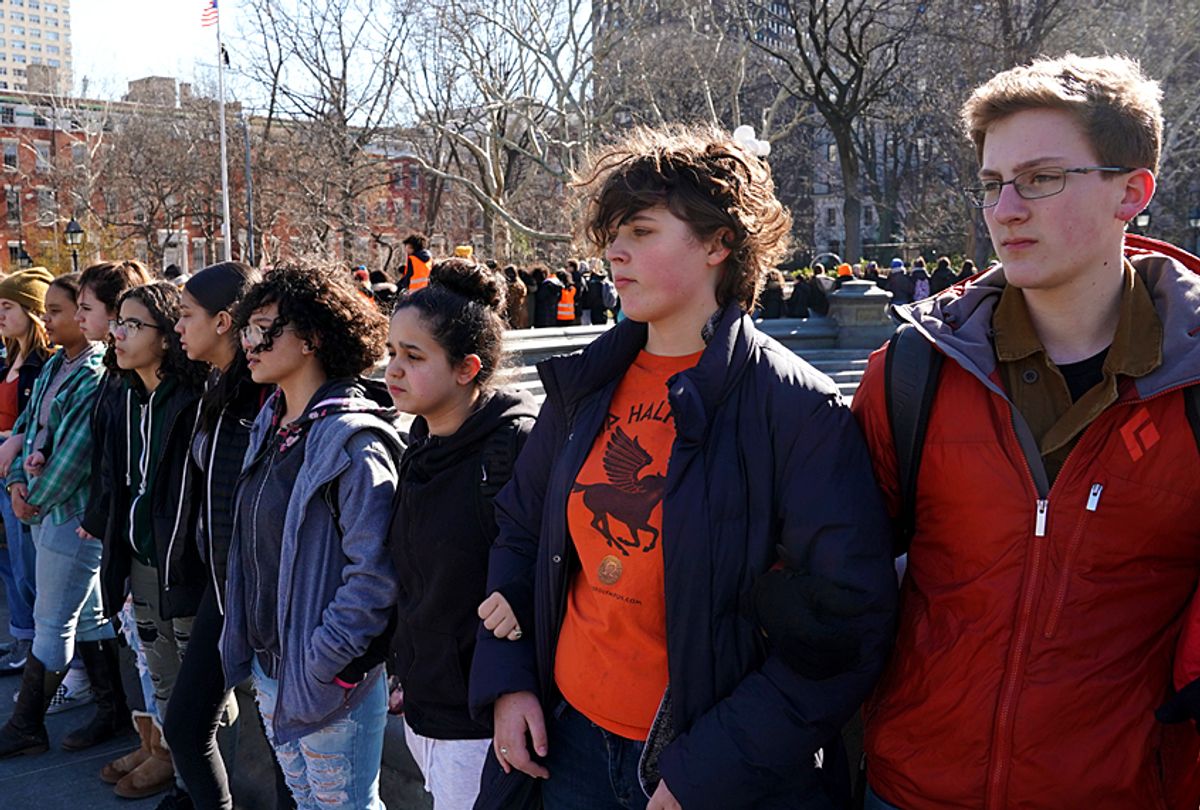 Students from Harvest Collegiate High School form a circle around the fountain in Washington Square Park on March 14, 2018 in New York to take part in a national walkout to protest gun violence. (Getty/Timothy A. Clary)
--

At exactly 10 a.m. local time thousands of students across the country left their classrooms on Wednesday to mark the one-month anniversary of the mass shooting at Marjory Stoneman Douglas high school with a call to action. Part of a growing student movement against gun violence in America, the protests in various cities and neighborhoods lasted 17 minutes to honor the 17 victims gunned down in Parkland, Florida. In one Brooklyn neighborhood, the gathering lasted much longer.

Students as young as 12 described their constant fears at Brooklyn's Borough Hall, where students from middle school through law school from the Brooklyn Heights area gathered and spoke out against gun violence. While several students noted that their childhoods had been marred by a seemingly endless stream of mass shootings at a rate unmatched by any other country, the overarching message from the youth of Brooklyn was that the epidemic of school shootings is broader than school shootings.

"We have to address the issue of gun violence as a whole," Sarah Desouza, 17, a senior from Packer Collegiate Institute and one of the organizers of the rally, told Salon. "We're all out here today for gun violence that disproportionately affects black and brown communities and we're out here today for the students at Parkland."

Speakers and student organizers emphasized the importance of magnifying all those victimized by gun violence, from the suburbs of Florida to the south side of Chicago.

"We will be the generation to end gun violence!" was a common refrain chanted by many of the day's speakers.

The walkouts, the students told Salon, are to demand action from lawmakers, and to end the routine of scapegoating individuals rather than the lax laws and loopholes that allow teenagers to purchase firearms before they are legally allowed to drink. Several student speakers called for the minimum age to purchase a firearm to be raised to 21 nationally, just as an amendment passed by lawmakers in Florida last week as part of a larger gun control bill mandated. The student activists also want a ban on military-style rifles and mandatory, universal background checks before every firearm purpose.

Many of the students who attended and spoke at the rally in Brooklyn are still too young to vote but they promised to stay engaged until they can vote those in Congress who failed to act out of office.

"America’s gun laws are abnormal relative to the rest of the world," Bryson Wiese, 17 and co-founder of Coalition Z, a youth-led activist organization in New York City, told Salon, "And as such, we have an abnormal epidemic of gun violence. So taking time out of our daily routine, walking out of school, helps to de-normalize that uniquely American cycle of tragedy to which we are unfortunately becoming numb."

Beyond the legislation and policy they are demanding, the act of mass walkouts demonstrates the power of grassroots organizing to a new generation — one determined to disrupt the normal order.

Students from Parkland and elsewhere will come together on March 24 for a mass demonstration called "March for Our Lives" in Washington D.C. The walkouts today were just the beginning of an ongoing movement, the students say, one they plan to sustain in the coming weeks and for the foreseeable future, especially given the shortcomings they see from the adults in power.

"People are always telling us 'children our the future,'" Violet Kopp, 16 and a sophomore at Saint Ann's School said, "well, it's time they start acting like it."