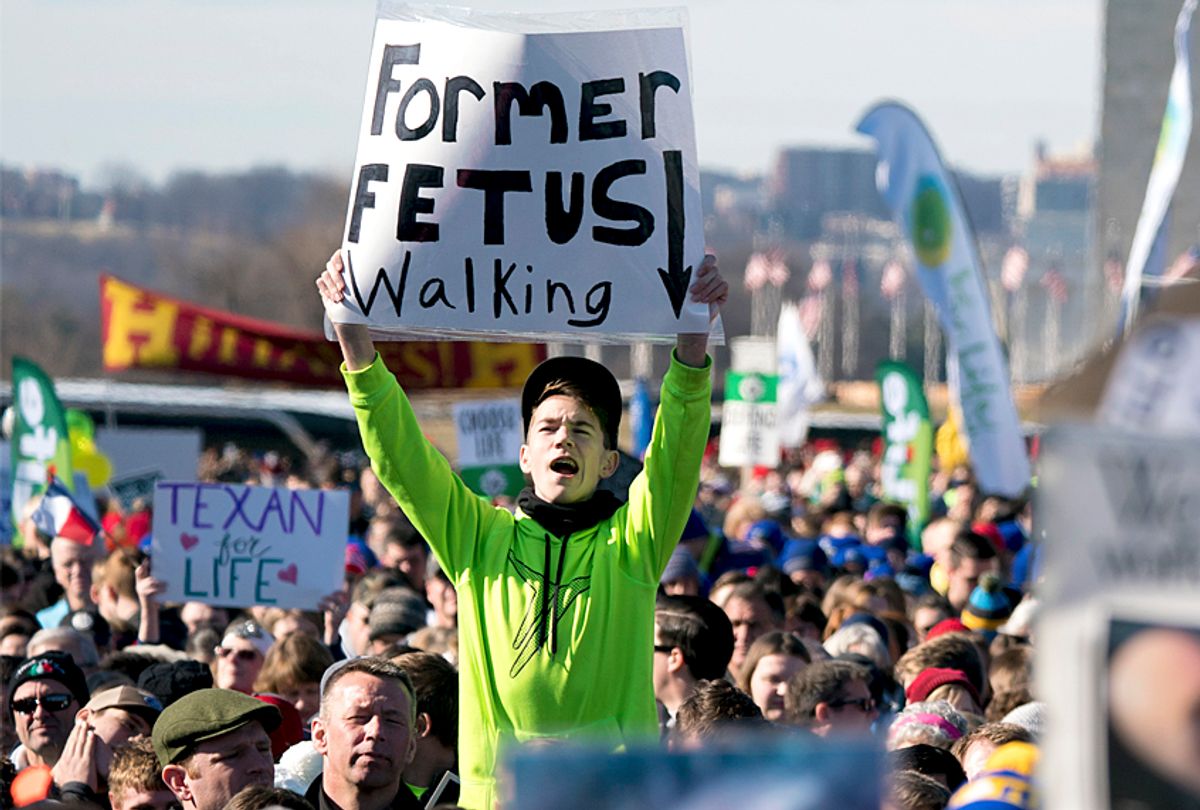 Mississippi is on the verge of enacting the most serious limits on abortion anywhere in the United States. Both houses of the state legislature, under Republican control, have passed a law banning the procedure after 15 weeks of gestation. Gov. Phil Bryant, also a Republican, has indicated his intention to sign the bill this week. Political analysts believe the bill is meant to provoke a lawsuit, in hopes of overturning the Supreme Court's Roe v. Wade decision. But to hear Republicans in Mississippi tell it, their only intention is to protect the well-being of women and children.

"As I have repeatedly said, I want Mississippi to be the safest place in America for an unborn child," Bryant said in a statement supporting the bill.

“The United States Supreme Court . . . has indicated that the state has a couple of interests when it comes to regulating abortion,” Republican state Sen. Joey Fillingane told Mississippi Today. “One is protecting the health and life of the mother. Another is protecting the potentiality of human life.”

Pro-choice advocates strongly disagree. “The suggestion that this is about health and safety is just an outright lie," Dr. Jamila Perritt, a fellow with Physicians for Reproductive Health, told Salon. "This is a concerted effort to eliminate access to abortion care, period. If the state of Mississippi was really concerned . . . about the health of women and their families, then it would be making clear efforts to address the health care disparities that we see.”

In the past couple of months, more information has come out showcasing the abysmal state of health care in Mississippi, especially in less affluent and rural areas. The state health department released a report on Monday examining the child mortality rate in 2015 — tied for second-highest in the nation with Alabama and Louisiana, at 40 deaths per 100,000 children — and found that one-third of those deaths could have been prevented. In January, the Centers for Disease Control and Prevention released their state analysis of infant mortality and, unsurprisingly, Mississippi has the most babies dying, with more than 9 deaths per 1,000 babies born, more than twice as high as Massachusetts, which has the lowest rate.

Maternal mortality in the state is nearly 40 deaths per 100,000 births, putting the state at more than twice the national average.

This year's County Health Rankings finds wide disparities in sexual health care outcomes in the state, with some counties having rates of sexually-transmitted infections (STIs) twice as high as the state's average. And Mississippi's STI rates are far higher than the national average, putting the state at No. 3 for chlamydia and first for gonorrhea. Forty-three out of every 1,000 teenage girls give birth in a year in Mississippi, compared to 24 out of 1,000 for the nation at large.

“When you’re more concerned about the abortion rates than infant mortality or maternal mortality," said Dr. Willie Parker, board chair for Physicians for Reproductive Health, "you have a hard time convincing me that what’s really at stake is a genuine interest by the state of Mississippi in the well-being of women and families.”

Parker, a former abortion provider in Mississippi, emphasized that abortion limits are a threat in themselves to the health of women and their families.

"Women who are the most destitute, like Mississippi women living in poverty," he explained, "have a hard time scraping up the funds, arranging the transportation and having the waiting period," and that will often push abortion past the 15th week. Research repeatedly shows that women who are denied abortion are more likely to end up in poverty, and that lack of abortion access is correlated with worse maternal health outcomes.

If legislators in Mississippi actually wanted to improve the health and well-being of women and children in Mississippi, experts say, there's no end of genuinely effective measures they could take.

"Really invest in the health and nutrition of moms and babies right from the very start," recommended Adrianna Logalbo, the managing director of 1,000 Days, a nonprofit devoted to improving maternal and infant outcomes. Nutritional programs like WIC help, Logalbo explained, as does making sure women have access to health care.

Mississippi rejected the Medicaid expansion under Obamacare, and the state now has the sixth-highest uninsured rate in the country.

Logalbo also recommended "paid family and medical leave policies that actually make it possible for women to care for themselves and their newborn,” noting that lack of such policies means that women often miss prenatal appointments and often return to work — as one in four women do — within two weeks after childbirth. Reduced maternal leave is, unsurprisingly, correlated with higher infant mortality.

“Part of the problem is lack of access to health care services, but there also aren’t a lot of supportive systems in place for young people," said Nicole Cushman, the executive director of Answer, which helps promote sex education in the United States. "Comprehensive sex education has a long track record of helping young people to delay the first time they have sex, and to use condoms and contraception when they do become sexually active."

She noted that Mississippi had taken "baby steps" towards better sex education in the state but that "many schools there are still adopting abstinence-only programs."

Cushman flagged the Teen Health Mississippi program run by Mississippi First, which directly trains educators to work with the community, as the sort of measure the state should pursue more seriously.

Mississippi could also make sure that "folks have a living wage and maternity leave and sick leave to be able to take care of their children when they are sick, and get them into the pediatrician," Perritt suggested. Such measures would help actual women and children, not the imaginary ones who haunt the anti-choice imagination.

Parker went even further, noting that real improvement in maternal and infant health would require more investment in "education, housing, child care and the like," issues he called "the social determinants of health."

Of course, investing in health care access, sex education and nutrition — not to mention family leave, education and housing — costs money. But so does passing a 15-week abortion ban. As Laura Bassett at Huffington Post detailed in 2016, legal costs for defending these medically unnecessary abortion bans can run well into the millions for state taxpayers.

Even if Mississippi "isn’t going to liberalize and democratize opportunities for housing, education and health care," Dr. Parker said, "it’s clear that restricting access to women’s health in the form of abortion and contraception does harm."

“I would like to see Mississippi refuse to harm, if it isn’t going to help," he added with a sigh.