Stephen Colbert debuts "March Sadness," as White House staffers place bets on who's out next

It's fodder for late night comedy, but there's a lot of dysfunction in the White House 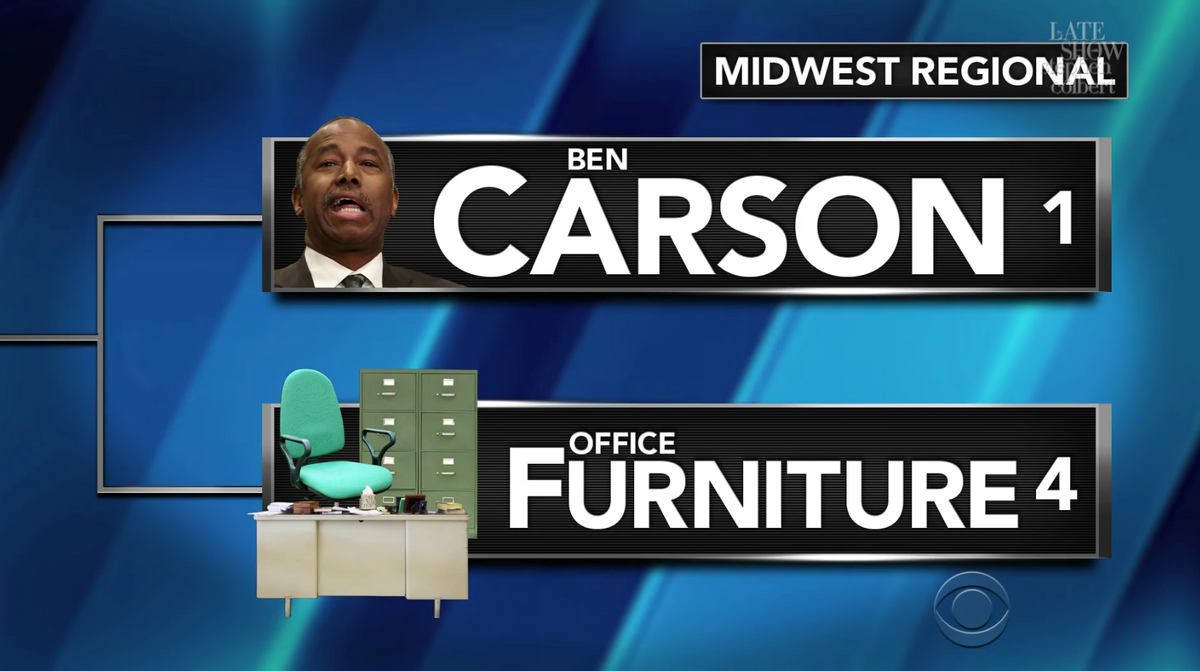 President Donald Trump's White House is in chaos, and so much so that staffers "have begun betting pools of sorts," in which they wager who will be sent home packing next. For Stephen Colbert, it's an opportunity that couldn't be passed up.

"The Late Show" premiered "March Sadness" Tuesday, featuring (fictional) commentators Larry Boberry and Gary Nanafanafoferry, breaking down previews of the upcoming matchups in the "DCAA Tournament" to "find out which Trump administration members will still be left by the end of March."

Secretary of State Rex Tillerson was eliminated early on as CIA Director Mike Pompeo edged out the victory. Trump and Attorney General Sessions were set to face off in a "classic matchup" of "tiny hands versus tiny head," Nanafanafoferry said.

Other matchup previews included White House Chief of Staff John Kelly versus "Javanka," a combined team of senior advisers Jared Kushner and Ivanka Trump. Boberry pointed out that Kelly is "battle tested" but that "Jared dominated the Ivy League with his signature move, yelling 'my dad paid for this building.'"

In a "grudge match," Housing and Urban Development Secretary Ben Carson was set to face off with "Budget Office Furniture," while Education Secretary Betsy DeVos battled it out with "Shapes & Colors."

While the skit may have been outrageous, it's not exactly far off from the incredibly toxic environment that has been reported out of the White House, where there has been never been such a "mood of acute anxiety" in the wake of recent staff shake-ups from the president and the fear that more is to come.

"This is the most toxic working environment on the planet. Usually tough times bring people together. But right now this atmosphere is ripping people apart," a White House official told Axios. "There's no leadership, no trust, no direction and this point there's very little hope. Would you want to go to work every day not knowing whether your future career was going to be destroyed without explanation?"