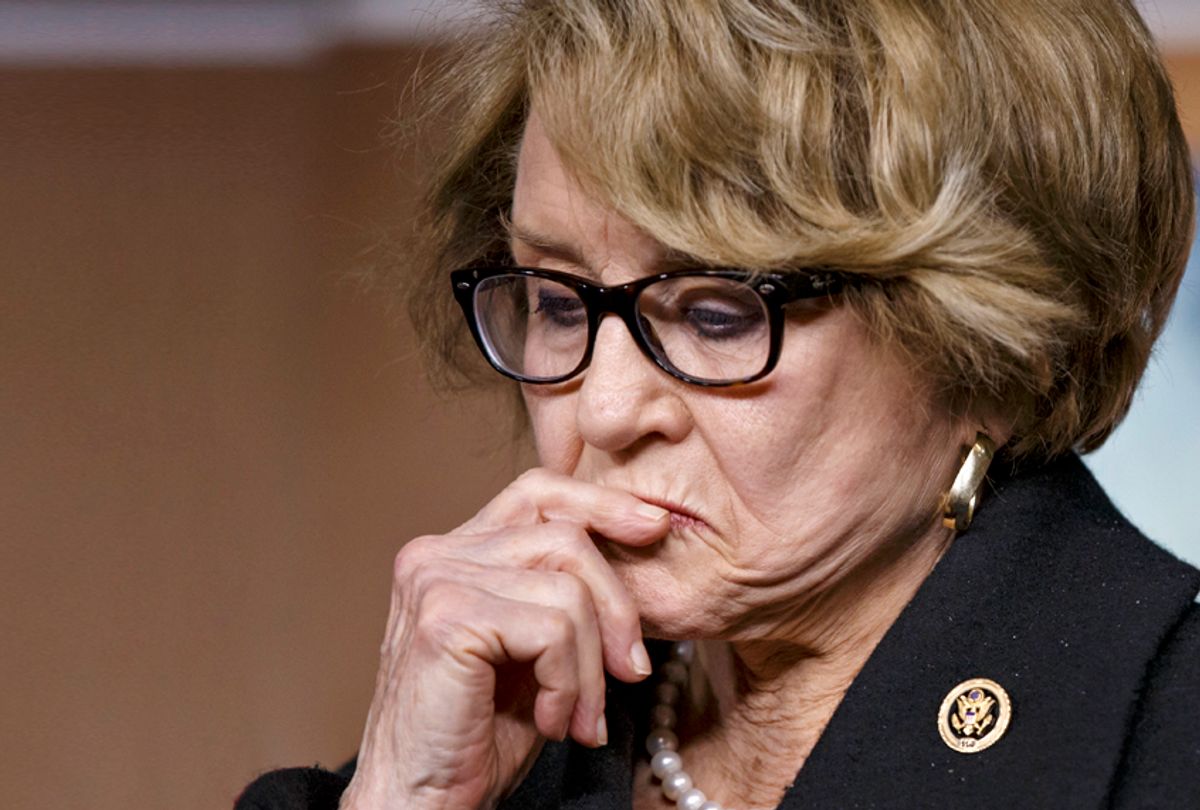 Rep. Louise M. Slaughter, who spent more than 30 years in Congress, died Friday. The New York Democrat was hospitalized after a fall last week near her Washington home and passed away at George Washington University Hospital surrounded by her family. She was 88.

Slaughter was the first female chair of the House Rules Committee and a champion of women's rights from her first election to Congress in 1986 through her decades in office. "To have met Louise Slaughter is to have known a force of nature," Slaughter's Chief of Staff Liam Fitzsimmons said in a statement.

House Democratic Leader Nancy Pelosi said in a statement Friday that she was "heartbroken" by the news. "In her lifetime of public service and unwavering commitment to working families, Congresswoman Slaughter embodied the very best of the American spirit and ideals. With her passing, the congressional community has lost a beloved leader and a cherished friend."

"Louise was a trailblazer," Pelosi continued. "She used her leadership position to fight for women and working families in New York and across the country. Her strong example inspired countless young women to know their power, and seek their rightful place at the head of the decision-making table."

Senate Minority Leader Chuck Schumer, D-N.Y., called Slaughter a "giant," in a statement. "She had deep convictions — on both issues important to the people of Rochester, and for the integrity and honesty of the political system," he said. "The ferocity of her advocacy was matched only by the depth of her compassion and humanity."

All across social media, journalists, supporters and politicians shared memories of Slaughter and highlighted her incomparable contributions to the American political landscape.

In Louise Slaughter we had a fearless public servant, a champion of women’s rights, and a leader in the truest sense of the word. She will be so missed but her legacy will live on. Thinking today of her family and loved ones.

I first met @louiseslaughter at a White House dinner in 1998. She was my seatmate at President Clinton's table and we had a ball talking like old friends. Without question, she helped make that an unforgettable night. RIP, dear one.

I will never forget the day #LouiseSlaughter and 6 other House Democratic Congresswomen marched to the Senate to demand that the all-male Senate Judiciary committee delay a final vote on Clarence Thomas October 8 1991. She lost that battle but was a fighter to the end. RIP — Andrea Mitchell (@mitchellreports) March 16, 2018

I'm so sorry to learn of the passing of Rep. @LouiseSlaughter. She entered public service at a time when there were few women in the arena and blazed a trial for countless others. You couldn't find a better advocate for women in Congress. My thoughts are with her family. — Sen Dianne Feinstein (@SenFeinstein) March 16, 2018