Stand up, hook up, shuffle to the door

General McMaster prepares to parachute out of the White House 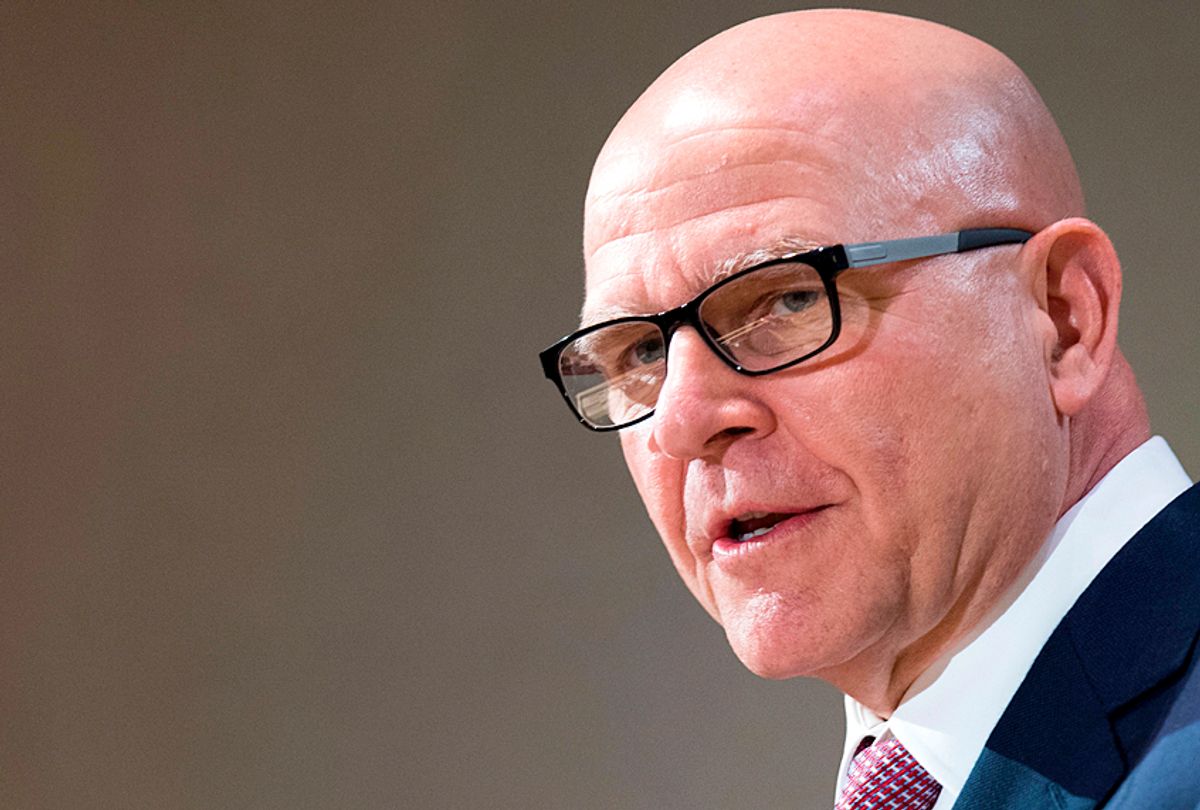 Poor General McMaster. It was only a year ago that we were treated to a photograph on the front page of the newspaper of Trump and his brand-new national security adviser sitting on a hideous loveseat in one of those overdecorated great rooms at Mar-a-Lago. It was February 20, 2017, the day Trump announced he had picked General H.R. McMaster to replace the disgraced-but-not-yet-indicted Michael Flynn as his top watchdog over national security at the White House. There sat McMaster in his dress blues, gesturing forcefully with his hands as he no doubt explained some complex military concept to the new commander in chief. Trump was doing his best to look seriously engaged in whatever they were talking about, or at least engaged anyway, before he headed out the door for a round of golf with some zillionaire buddy seeking a government contract, or a tax cut, or maybe a ride back to Washington on Air Force One.

Now McMaster appears to be headed out the door at the White House, yet another casualty in a month filled with them. First to go was Rob Porter. Remember him? The president’s staff secretary was ousted when it was discovered that he hadn’t passed his Top Secret security background check because he had roughed-up both of his ex-wives. They tried for about a day to hang onto him, with chief of staff John Kelly testifying to his sterling character, until a photo of one of Porter’s wives with a big black eye surfaced, and then he was reluctantly shown the door.

Next up was Josh Raffel, a little-known White House deputy communications director close to Jared Kushner and wife Ivanka, who was said to be “returning to the private sector” because of “family obligations.” All a bit murky, but then so was Raffel himself, who was described as working with Kushner in the White House “Office of American Innovation” and on Kushner’s tireless toiling to solve the problem of peace in the Middle East, neither of which efforts have borne any fruit. "The White House won't be the same without him," Ivanka Trump said at the time Josh headed for the exits. I’ll bet.

The next day, White House communications director Hope Hicks followed her deputy out the door, immediately after a seven-hour grilling by the House Intelligence Committee. Poor Hicks was still smarting from the unflattering publicity she received when it was revealed that she had been Rob Porter’s most recent paramour. It probably didn’t help that she had told the House committee that she had had to tell some “white lies” for her boss the president during her time in the White House. Hicks is presently awaiting a subpoena from Special Counsel Robert Mueller’s team that will probably plonk her down before a Washington D.C. grand jury to answer questions about that infamous meeting at Trump Tower between Kushner, Manafort, and Flynn and a gaggle of Russians with connections to Kremlin intelligence services.

Next up was White House chief economic adviser Gary Cohn, who punched out after securing a big tax cut for his pals on Wall Street in New York, but losing the fight over trade policy when Trump announced out-of-the-blue tariffs on steel and aluminum at a photo-op in the White House one day last week. Cohn was a Goldman Sachs investment banker and supposedly one of the “adults in the room” tasked with keeping Trump from doing stuff like issuing big tariffs that none of Cohn’s handlers back in New York were in favor of.

Next to get a pink slip was one John McEntee, the president’s personal assistant and “body man” who had been with him since early in the campaign. McEntee’s big job was making sure Trump had a Diet Coke handy and a place to hang his jacket. He was another White House aide who couldn’t pass the background check for a Top Secret security clearance, apparently because he was fond of gambling large sums of money and was deemed “vulnerable to outside influence.” Young McEntee, 27, was unceremoniously escorted off White House grounds by Secret Service agents, leaving behind his personal effects including his jacket. He immediately picked up a gig on Trump’s re-election committee staff, however, where betting on long-shots has long been considered de rigueur.

Rounding out the busy month of Trump administration departures was Secretary of State Rex Tillerson, who was issued his walking papers by tweet on Tuesday, hours after returning from a trip to Africa. Tillerson has had a rocky relationship with his boss ever since he called him “a fucking moron” at a meeting of top national security officials at the Pentagon last summer. He was another of the mythical “adults in the room” who were expected to rein in Trump’s worst instincts during his first year in office. Tillerson instead presided over a hollowing-out of the Department of State, with dozens of top diplomats and career officials choosing to resign.

And now it’s General McMaster’s turn. He has been Trump’s national security adviser for just over a year. It took him half that time to rid his staff of the dead wood left behind by confessed perjurer Michael Flynn. Among the first to be fired was Ezra Cohen-Watnik, best remembered as  one of two national security staffers who helped Devin Nunes on his infamous “midnight run” last year, when he began his sabotage of the House Intelligence Committee (which he chaired) by trying to back up Trump’s claim that his “wires” had been “tapped by Obama” when he was running for office.

Then he fired former Fox News analyst KT McFarland, who had somehow landed a position as deputy national security adviser under Flynn. Then came Rich Higgins, a “director of strategic planning” under Flynn who authored an unhinged memo last year claiming that “globalists and Islamists” were involved in a “Maoist insurgency” to undermine the policies of President Trump.

Trump has been said to not enjoy the national security briefings he gets from General McMaster because “he is too rigid and . . . his briefings go on too long and seem irrelevant,” according to the Washington Post. Along with the house-cleaning McMaster did of Flynn’s flunkies on the National Security Council, that would seem to indicate that at the very least, he has attempted to do the job for which he was hired. But keeping an impulsive, distracted, tweeting president informed about the threats facing the United States around the world would appear to have been a thankless if not impossible task. Trump is considering replacing McMaster with retired General Keith Kellogg, currently serving as chief of staff to the National Security Council, because “the president likes his company and thinks he is fun,” according to the Washington Post.

Chew on that one for a minute. Trump wants to replace one of his generals, one of the guys we’ve been told are “the adults in the room” with another general because he’s “fun.” Tennessee Senator Bob Corker really had it right a few months ago when he declared that the White House is “an adult day care center,” didn’t he?

I’m beginning to wonder when some of the other officials who have either quit or been fired will screw up their courage enough to tell us what it’s like behind the scenes working for Donald Trump. But I’m not holding my breath.