Senators: It's time for the U.S. to defend its involvement in Yemen — or get out

Senators are starting to question what the U.S. is doing in the Middle East, and why we're involved 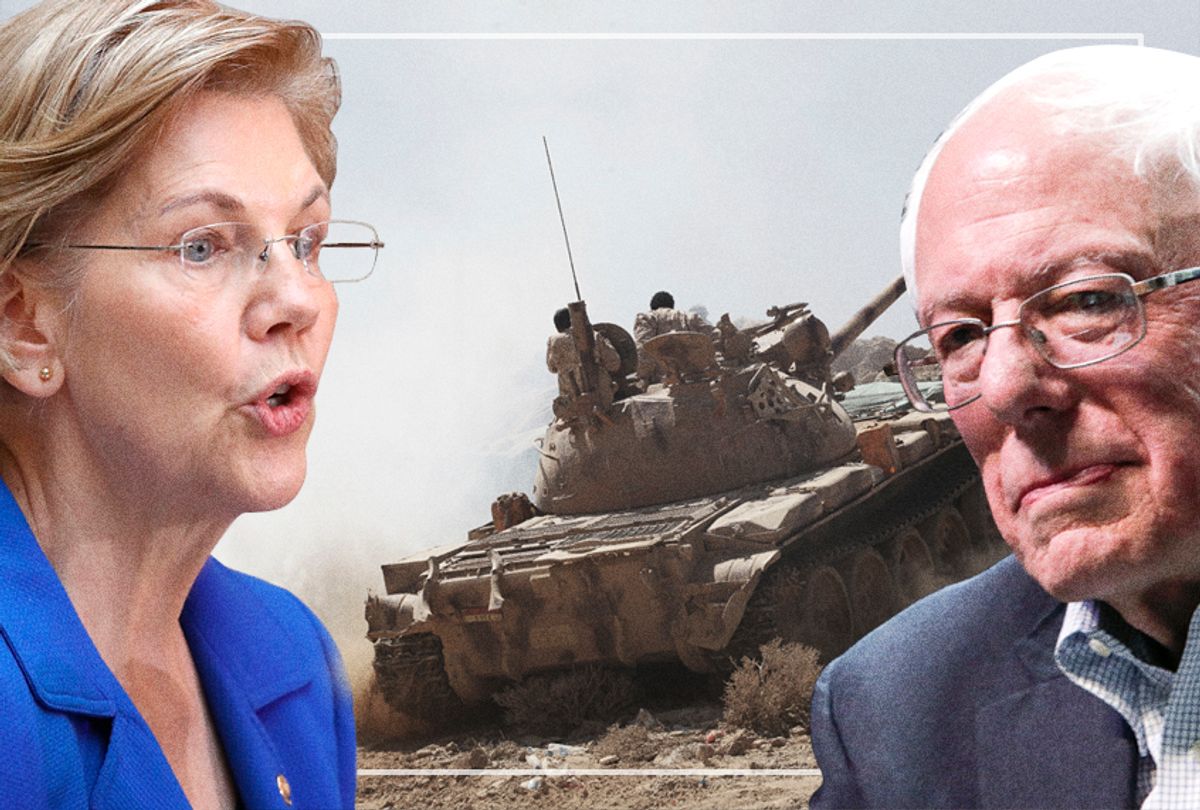 For three years now, bombs have fallen on thousands of innocent people in Yemen, and the United States military says it has no idea if any of the munitions are U.S.-made or if the Saudi-led coalition jets doing the bombing have been flying on fuel provided by the U.S.

The deeply troubling disclosure came on Tuesday in a budget request hearing before the Senate Armed Services Committee, from the head of U.S. Central Command, which oversees military operations in the Middle East, northern parts of Africa and Central Asia.

When asked if the military kept track of the purpose of the Saudi-led coalition missions, Gen. Joseph Votel told Sen. Elizabeth Warren, D-Mass., "senator, we do not."

Warren cited a Feb. 27 report from Reuters, in which five civilians were killed and 14 were wounded in an airstrike in northern Yemen by the Saudi-led coalition. When local paramedics attempted to dig victims from the the rubble in the immediate aftermath, two more airstrikes followed.

"General Votel, when you receive reports like this from credible media organizations or outside observers, is CENTCOM able to tell if U.S. fuel or U.S. munitions were used in that strike?" Warren asked.

"No, senator, I don’t believe we are," Votel replied.

Sen. Angus King, I-Maine, followed, and asked what the implications and impact would be if the U.S. were to pull its support of the Saudi-led coalition.

"I think right now that the provision of those things that you just covered right now gives us placement, it gives us access and it gives us influence with Saudi Arabia," Votel replied. "And what I would highlight to you is that we have been working with them, sharing our own experiences."

King pointed out that his response was a contradiction of his earlier statement that the U.S. has no idea what Saudi-led missions entailed. "If the argument is this allows us to maintain control, are we maintaining some level of control?" he asked.

"Well, the influence that we derive with them is by working with them to demonstrate how we do our targeting process," Votel responded. He also claimed that the Saudis have listened to U.S. input in the past.

To clarify, King said, "So the principal argument against this move to limit or cut off that aid is, if we do, the Saudi conduct might be worse."

"Senator, from my perspective, it's better for us to stay engaged with them and continue to influence this," Votel replied. "They want this type of support, and they want to improve their capabilities."

These exchanges highlight the deeply problematic nature in which the U.S. has continued to aid and abet a conflict that has been unrestrainedly disproportionate, and has left over 2 million Yemenis displaced. The U.S. has provided the Saudi-led coalition with munitions, mid-air refueling and intelligence assistance. That the military has now claimed to still not even be aware of the purpose of missions or who or what the intended targets are is grossly irresponsible and exemplifies the nation's culpability.

It rings especially true as the coalition has bombed hospitals, schools, factories and funerals.

Yemen is currently the world's worst humanitarian crisis, and as the war's third anniversary approaches at the end of this month, the leading architect of the Saudi-led intervention, Saudi Arabia's Crown Prince Mohammad bin Salman, will be in the midst of a two-week visit to the U.S.

It's fitting that as the war — one that has left more than 10,000 civilians dead — enters its fourth year, bin Salman will meet with President Donald Trump where the two will discuss "ways to strengthen ties between the United States and Saudi Arabia and to advance our common security and economic priorities," the White House announced.

The unwavering alliance between Saudi Arabia and the United States has a long history, but the Saudi leader has found a devoted friend in Donald Trump, one who has sought to enable him even more than his predecessor did. Saudi Arabia was the top recipient of U.S. weapons sales in 2017 under the Trump administration, even as the conflict has exacerbated and hundreds of thousands have suffered from the worst cholera outbreak ever to be recorded, with no end in sight.

But there is an end in sight for U.S. support of the conflict, which small handfuls of lawmakers have in the past sought to revoke. The latest effort comes from the Senate and a bill co-sponsored by Sens. Bernie Sanders, I-Vt., Mike Lee, R-Utah, and Chris Murphy, D-Conn., which would halt the nation's assistance to the Saudi-led coalition.

"Why are over a million people in Yemen today suffering from cholera, a disease that is entirely 100 percent preventable? The reason is that the water treatment facilities inside Yemen have been bombed, have been rendered useless, such that there is no means by which you can keep the water that these young children drink clean," Murphy said from the Senate floor on Tuesday in front of disturbing and tragic images of the conflict.

He continued, "Bombs sold to the Saudi coalition by the United States, bombs dropped from planes refueled by the United States Air Force, bombs that are directed via targeting centers in which U.S. personnel are embedded hit water treatment facilities inside Yemen such that there is now the worst cholera outbreak in our lifetime."

The reality is that the U.S. could have played a different role in this conflict, one that pushed for humanitarian aide, and brokered necessary ceasefires.

"The Saudi government has poured millions of dollars into lobbying campaigns targeting members of Congress," a Murphy Senate aide told Salon in an emailed statement. "On the other side you have humanitarian groups and other NGO’s that do not have anywhere near the same resources to get their message out."

The bill is scheduled to be debated next week, and coincidentally comes at the same time Trump welcomes bin Salman into the White House. Congress never approved U.S. support for this war, which began under the Obama administration, and it's necessary that lawmakers hold the executive branch accountable. It's also necessary that the U.S. deeply reflect on the conflicts in which it is culpable when it has both a moral responsibility, as well as the ability, to put an end to it.