But unlike the A-bomb scientists, social media's progenitors have no idea what they've unleashed 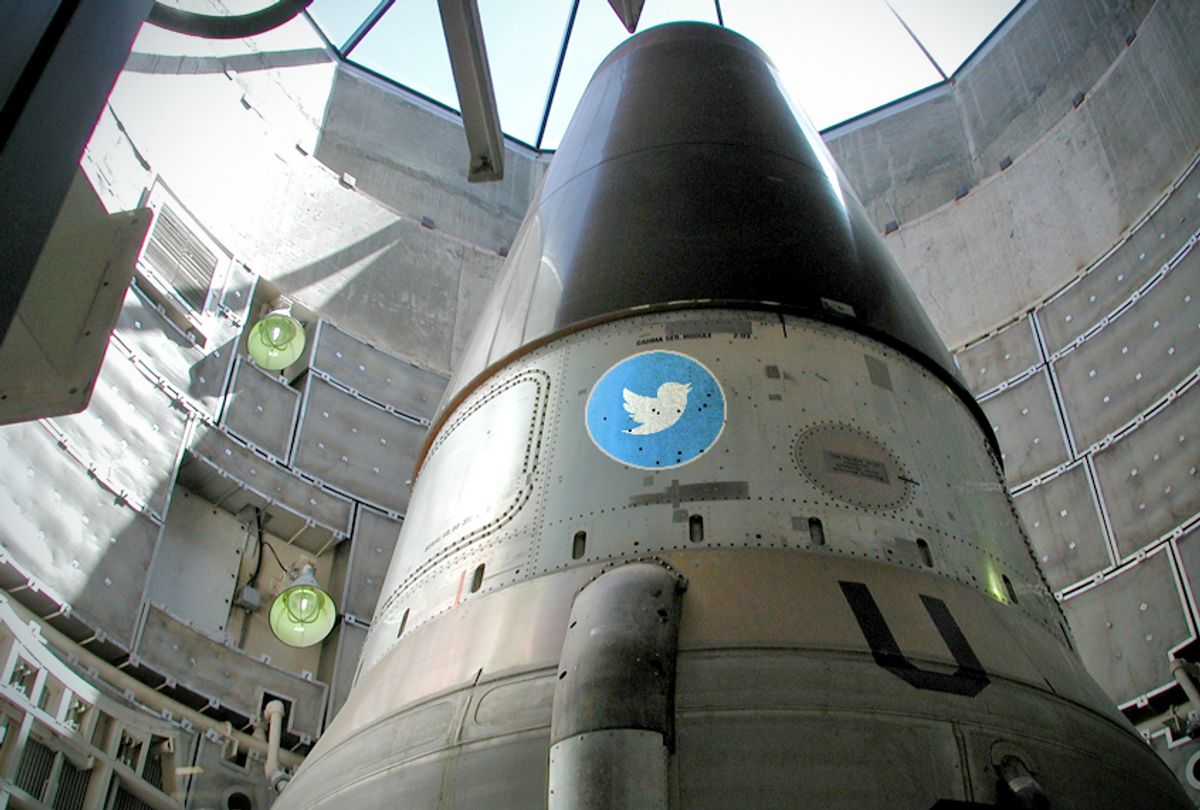 But these platforms, as they are sometimes called, are dangerous. They have power beyond their scope, and responsibility beyond their expertise — and there's the rub. In the last several years, these sites have become uniquely toxic: Twitter has become "a primary destination for trolls and hate groups," as critic Charlie Warzel wrote in BuzzFeed. Facebook's sins in 2016 alone included "being accused of imperialism in India, censorship of historical photos, and livestreaming footage of human rights violations," as the Guardian wrote. YouTube has become one of the primary ways that young people are radicalized and indoctrinated by fringe figures like Alex Jones. And just last week, an MIT study found that oft-inflammatory, oft-propagandistic fake news spreads far faster than real, factual news on Twitter.

Tim Berners-Lee, one of the co-creators of the internet itself, recently criticized the power of the platforms in an open letter. “The web that many connected to years ago is not what new users will find today,” Berners-Lee writes. “What was once a rich selection of blogs and websites has been compressed under the powerful weight of a few dominant platforms. This concentration of power creates a new set of gatekeepers, allowing a handful of platforms to control which ideas and opinions are seen and shared.”

How can we create a news ecosystem that promotes truth? By challenging certain assumptions. Which brings me to my point: Are Twitter, YouTube and Facebook the new Manhattan Project? In other words, a morally questionable project that intended to save the world, and ended up compromising our humanity?

On its surface, this suggestion may seem ridiculous. Despite their vast power, none of those three platforms has the power to end the world. Then again, Jack Dorsey lets an unstable president use Twitter to threaten nuclear war. YouTube is a chapter house for the alt-right, and a major source of radicalization. And Facebook decides what truth is now: Academics say the social network helped spur the Rohingya genocide in Myanmar. These seemingly neutral platforms can actually sow death, destruction and authoritarianism.

For my money, there's no better example of the moral gulf between design and execution than the Manhattan Project. So let's talk about Los Alamos. The bomb was a technology developed by a cloistered group of scientists who didn't give enough thought to the long-term effects, and probably couldn’t have anticipated how it would utterly remake global politics. And so, 17 short years after Trinity, the Soviet sub B-59 almost fired a nuclear torpedo at American destroyers blockading Cuba. We came that close, because the Russians misread American practice depth charges as a real attack. Instead of just thinking about nukes as a moral issue, we should consider their existence as a proof of our technological immaturity: We don't have the intelligence to properly handle the science we already have.

What ties Los Alamos to Silicon Valley is a lack of philosophical imagination. Now, TYF are not existential threats. PewDiePie does not have a thermonuclear capacity (yet). But TYF warp our society, especially our political culture. Since the election, Very Serious People have complained about each of these platforms: What influence do they have on our Republic? What is their capacity to harm? These are important questions. However, the pundits are too timid. They give TYF too much respect. They imbue the leadership of TYF with a maturity and wisdom that those companies do not possess.

Silicon Valley considers itself a new Athens. By culture, by heritage, by proximity to the Universities of California and Stanford, the engineers and CEOs of the Valley imagine themselves to be scientists. And who can blame them?

But what they are doing is not science. That's another difference between Los Alamos and Silicon Valley. TYF are not research projects. Streamlining tweeting is not the same as solving the three-body problem. Most of the "science" involved in the Valley's consumer goods was done decades ago, in government-funded labs. TYF are products.

The owners, shareholders and maintainers of these platforms are involved in mercantile affairs. Not natural philosophy. This is a business, and businessfolk deal in purchasable goods. The media treats tech corporations as if they were scientific communes, not companies. The public act as if TYF's sole purpose was to selflessly will the future into being. That’s a misconception.

I understand that saying "Facebook is a business" sounds like the most obvious and banal fact in the world. But it bears repeating, for a very simple reason. Once we understand that they are not scientists,  and have nothing to do with science — once we are reminded that these are tech businesses -- the strange behaviors of TYF are made legible.

Talk to enough Twitter insiders and one thing becomes painfully evident: The company’s understanding of its platform hasn’t always been clear to employees, even at senior levels — a problem that has made it difficult to understand how to police harassment. One source recalls that, when asked, Jack Dorsey refused to answer exactly what kind of tool Twitter was. “He said, ‘Twitter brings you closer,'” the former employee recalled. “And I said, ‘To what?’ and he replied, ‘Our users always finish that sentence for us.’ And to me, I thought, Well, it’s going to be really difficult to set policy in place if we can’t define what this thing is."

To use an old chestnut by "Jurassic Park" character Ian Malcolm, the makers of TYF were so preoccupied with whether or not they could that they didn't stop to think if they should. There was no predicate to Dorsey’s sentence about Twitter. Only subject.

The TYF platforms were created without any larger framework: moral, aesthetic or political. The state of the internet permitted the construction of a short-burst telegraph service suitable for phones, so Twitter was invented. By 2005, streaming video was possible, so YouTube emerged. Social networks were feasible by 2004, so Facebook arose. The founders took the trouble to check the code, and nothing more. They slowly refined the platforms to generate as much revenue as possible, often by preying on users’ psychology. That was the end of their thought process.

Zuckerberg's fecklessness is well-known; but in each case, the founders of TYF were content-indifferent to whatever followed. They fell victim to the California Ideology, as described by the scholars Barbrook and Cameron. The California Ideology is the unofficial religion of the tech sector: the cyber-libertarian belief that somehow, some way, with the right networks, with enough cables, all human problems will solve themselves. It's a form of technological determinism. Give everyone enough bandwidth, and every human disagreement will wither away in a fever-binge of conversation. Tech savants hold to the California Ideology in the same way old capitalists cling to Social Darwinism: It hand-waves away any human suffering.

You may note that the California Ideology does not make allowance for the viral spread of fake news. Or of racial slurs in gaming videos ... but hey, what church doesn't have its blind spots? Surely, even when TYF began to make serious money, and accrue real power, surely even then, nobody would ever use these platforms to organize white supremacist rallies. Or to spread anti-vaxxer scares. Surely no YouTube channel would ever carelessly shock children. Surely no YouTube personality would ever blog from a suicide forest. Surely Facebook would never de-educate the entire American public. I mean, come on, guys: Surely, no president would ever threaten another country with nuclear fire on Twitter.

Build power without purpose, and you see the results: TYF made an Eden for sociopaths. This is why the leadership of TYF are so terrible at changing their companies: These institutions never had a rationale to begin with, only vague noises about connectivity and sharing. Their ideology told them the marketplace would heal itself, and that excused them from weighing tough choices. If it’s online, then it’s correct.

Therefore, the problem shared by Twitter CEO Jack Dorsey, YouTube CEO Susan Wojcicki and Facebook CEO Mark Zuckerberg is not exactly a lack of morality; it's more a kind of large, obscene childishness. They have the casual indifference to effect you typically see among the profoundly rich. As F. Scott Fitzgerald put it: "They were careless people, Tom and Daisy — they smashed up things and creatures and then retreated back into their money or their vast carelessness, or whatever it was that kept them together, and let other people clean up the mess they had made." Our technology is the envy of the world. But there is no offloading choice. Human moral judgment can never be footnoted away. The sages of Los Alamos learned that too well. The Valley never has.

TYF is a poor bloodhound of values. It can discover your likes and dislikes, your buying patterns and political preferences, but cannot understand abuse, and is a dismal hand at protecting its users. All of that capacity for sharing and linking, and none for empathy; an ocean of data, and not a dollop of understanding. A book of Faces, and no eyes to see.