Mister Rogers and Mr. Trump: Can the Neighborhood of Make-Believe help us through this? 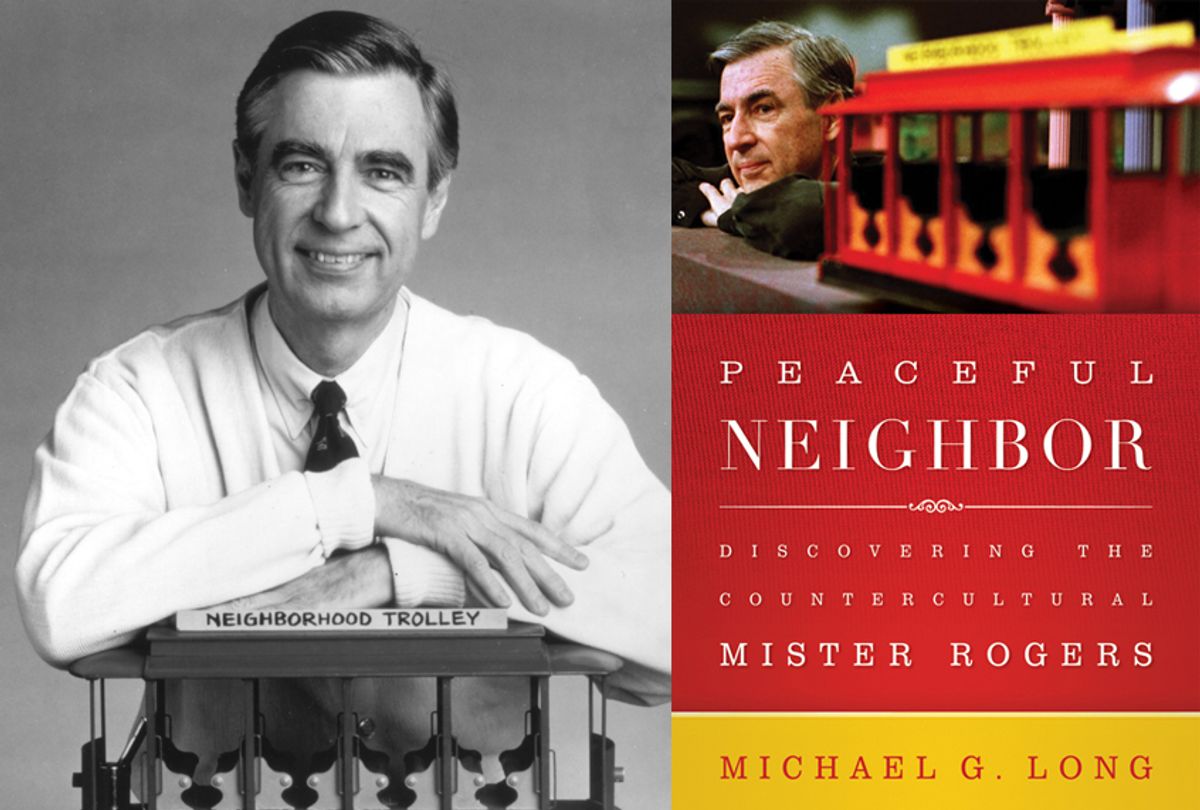 Fred Rogers was and remains a global icon. During his five-decade career in public media, his television show "Mister Rogers' Neighborhood" aired almost 900 times and was watched by millions of people around the world. Mister Rogers was beloved by both children and adults. What he called his "Neighborhood of Make-Believe" was a loving space where human dignity and respect were the norm. For the viewers of "Mister Rogers' Neighborhood," Fred Rogers was a teacher, mentor and friend as well as a role model and, in many cases, substitute parent for the children who watched his show.

An ordained Presbyterian minister, Fred Rogers was a deeply moral and ethical person. His life philosophy and politics influenced almost every aspect of his life, art and teaching. While not advertised as such, the "Neighborhood of Make-Believe" was an extremely political space.

What were the origins of Fred Rogers' political vision and worldview? How did he use his television show as a place to comment on such issues as violence, intolerance and racism? In what ways did conservatives resist Rogers' humanistic teachings? And how would he have responded to the rise of Donald Trump and to what this moment reveals about American culture?

To answer these questions, I recently spoke with Michael Long, a professor of religious studies and peace and conflict studies at Elizabethtown College in Pennsylvania. Long is the author of the 2015 book "Peaceful Neighbor: Discovering the Countercultural Mister Rogers."

How did your book on Mister Rogers' life and philosophy come about?

The book came about because after witnessing another example of violent racism in the United States I decided that I needed to do something in terms of the preservation of peace in the United States. So, I dug around a little bit in Fred Rogers' archives and went through his scripts and old letters. He had a radical vision of peace for the United States and it started with this program in 1968. Mister Rogers seems so mainstream and he seems so sappy and sentimental, but if you dig a little bit he is a hardcore pacifist. I was attracted to his politics more than I was to his child psychology.

Who was Fred Rogers? Can we separate the character from the person? What can you tell me about his politics?

I think Rogers was really subtle in what he did. In fact, I've talked with some of the people who worked on the show and they never understood exactly what Fred Rogers was doing. He was a man of deep faith conviction. Rogers really latched on to this narrative that Jesus is the Prince of Peace. That Jesus is somebody who says, “Blessed are the peacemakers,” and he took that seriously.

He had clarity of faith, but on his show he only talked about scripture and the Bible one time. That’s the one and only time he did it on his program. So he creates this alternative parlance, right? He gets across his message of peace but he does it primarily through puppets and how his puppets sometimes get along and sometimes they don’t. Rogers is really performing politics on his show.

In terms of his radical politics, how did Mister Rogers signal to the civil rights movement?

In 1968, shortly after Martin Luther King is assassinated, Rogers has a program in which he invites black folks into his house. They come from an integrated school. And so Rogers is immediately saying to his audience in the neighborhood that African-Americans are welcome in my house. In the Neighborhood of Make-Believe, there's no discrimination.

In a year while the rest of us are seeing images of African-Americans rioting, Rogers gets this brilliant idea to have a black character who will be a police officer in the neighborhood. So Officer Clemmons becomes a character in the neighborhood of make believe. Of course he doesn't carry a gun! He sings a lot.

He is one of the first African-American recurring characters on television, and on children's television more specifically.

Did he make enemies among conservatives?

I think most people just didn't make a connection between what he was doing on the program and what was happening in the wider society. Every now and then you would get individuals expressing concern, saying they won’t let their children watch such media: “He works with the children with such liberal teachings." There was no concerted effort, but I can tell you that public television was concerned about Rogers expressing faith beliefs and asked him to tone that down.

People who were coming from the masculine culture of the United States would criticize him for being a feminist. They would also criticize him for seeming gay. Some of them would say, “I can't let my children watch a male role model like you.” I mean, think about it: In 1968, Fred Rogers is coming into a child's home in the middle of the afternoon when their father should be at work and is saying to these children, “Hey, I want to be your friend.”

He is teaching them about feelings and is showing children how to iron clothes, how to wash clothes. How to do things that women typically do, so he's butting up against gender stereotypes a lot as well. Some parents were concerned about that and said they would not let their children watch him.

What of Mister Rogers' testimony before Congress in 1969, defending the funding of PBS? How did that complicate his efforts to fly under the radar, so to speak?

If you are going to outline or detail some bullet points about Mister Rogers' moral philosophy, what would they be?

It's OK to get angry. But it's never OK to use violence when you're angry. Never, never is it OK to use violence when you're angry, but by all means get angry. He tried to show his anger on his show a couple of times and children would write with disbelief about that. Another bullet point is that it’s always important to know that somebody loves you, no matter who you are and what you've done. No matter what it is, Mister Rogers loves you.

Now, he's getting that lesson that he learned in church about God: That God loves him no matter what he does. This is a pretty radical notion and somebody wrote him a letter once about Hitler and the Nazis: Could he go to war against Hitler and the Nazis? Rogers said that he didn't think he could, that he could probably be a medic. He truly believed that God loved everybody and that no one was beyond redemption. No one, even Hitler, even the Nazis, and so there is no reason to kill anyone. Those faith convictions are really what drove his whole show and his entire demeanor.

What would Mister Rogers say about the rise of Donald Trump and the social forces he has unleashed in America? What advice or wisdom do you think he would give -- especially to those folks who are being further marginalized and brutalized by Trump and his supporters?

You know, I always resist questions like that. I have to put out a standard plea that it's impossible to say what a dead person would do today. Having said that, let me give it a shot. I think given Rogers' radical views about peace and justice that he would treat Trump just as he did shootings at schools. I think he would say: Look for the helpers. Look for the people who are trying to do something good in the middle of this horrible chaotic period of U.S. history. Look at the people who are fighting Trump’s agenda.

Look to the dreamers. Look to the people who are standing against Trump’s decision about getting rid of transgender folks in the military. Look at the members of Congress. Look at John Lewis, who stood up against President Trump. Look at the people who are helping us stand against everything that Trump seems to believe and embody and enact. Look at those people and try to mirror them. Try to mimic them, try to be like them. If you fail? Well, you go down trying.