The staggering death toll in Iraq 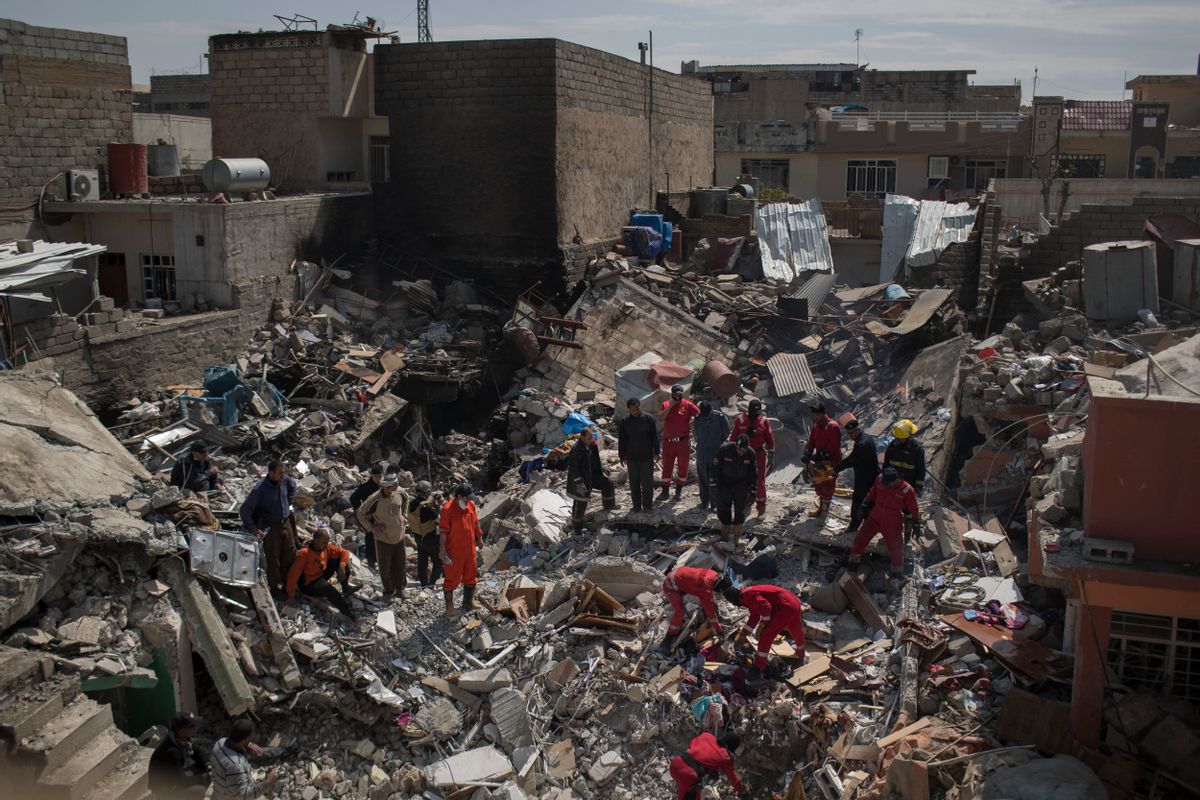 Civil protection rescue teams work on the debris of a destroyed house to recover the body of people killed in an airstrike during fighting between Iraqi security forces and Islamic State militants on the western side of Mosul, Iraq. (AP Photo/Felipe Dana, File)
--

March 19 marks 15 years since the U.S.-UK invasion of Iraq in 2003, and the American people have no idea of the enormity of the calamity the invasion unleashed. The U.S. military has refused to keep a tally of Iraqi deaths. General Tommy Franks, the man in charge of the initial invasion, bluntly told reporters, “We don’t do body counts.” One survey found that most Americans thought Iraqi deaths were in the tens of thousands. But our calculations, using the best information available, show a catastrophic estimate of 2.4 million Iraqi deaths since the 2003 invasion.

The number of Iraqi casualties is not just a historical dispute, because the killing is still going on today. Since several major cities in Iraq and Syria fell to Islamic State in 2014, the U.S. has led the heaviest bombing campaign since the American War in Vietnam, dropping 105,000 bombs and missiles and reducing most of Mosul and other contested Iraqi and Syrian cities to rubble.

An Iraqi Kurdish intelligence report estimated that at least 40,000 civilians were killed in the bombardment of Mosul alone, with many more bodies still buried in the rubble. A recent project to remove rubble and recover bodies in just one neighborhood found 3,353 more bodies, of whom only 20% were identified as ISIS fighters and 80% as civilians. Another 11,000 people in Mosul are still reported missing by their families.

Of the countries where the U.S. and its allies have been waging war since 2001, Iraq is the only one where epidemiologists have actually conducted comprehensive mortality studies based on the best practices that they have developed in war zones such as Angola, Bosnia, the Democratic Republic of Congo, Guatemala, Kosovo, Rwanda, Sudan and Uganda. In all these countries, as in Iraq, the results of comprehensive epidemiological studies revealed 5 to 20 times more deaths than previously published figures based on “passive” reporting by journalists, NGOs or governments.

Two such reports on Iraq came out in the prestigious The Lancet medical journal, first in 2004 and then in 2006. The 2006 study estimated that about 600,000 Iraqis were killed in the first 40 months of war and occupation in Iraq, along with 54,000 non-violent but still war-related deaths.

The US and UK governments dismissed the report, saying that the methodology was not credible and that the numbers were hugely exaggerated. In countries where Western military forces have not been involved, however, similar studies have been accepted and widely cited without question or controversy. Based on advice from their scientific advisers, British government officials privately admitted that the 2006 Lancet report was “likely to be right,” but precisely because of its legal and political implications, the U.S. and British governments led a cynical campaign to discredit it.

A 2015 report by Physicians for Social Responsibility, Body Count: Casualty Figures After 10 Years of the ‘War on Terror,” found the 2006 Lancet study more reliable than other mortality studies conducted in Iraq, citing its robust study design, the experience and independence of the research team, the short time elapsed since the deaths it documented and its consistency with other measures of violence in occupied Iraq.

The Lancet study was conducted over 11 years ago, after only 40 months of war and occupation. Tragically, that was nowhere near the end of the deadly consequences of the Iraq invasion.

In June 2007, a British polling firm, Opinion Research Business (ORB), conducted a further study and estimated that 1,033,000 Iraqis had been killed by then.

While the figure of a million people killed was shocking, the Lancet study had documented steadily increasing violence in occupied Iraq between 2003 and 2006, with 328,000 deaths in the final year it covered. ORB’s finding that another 430,000 Iraqis were killed in the following year was consistent with other evidence of escalating violence through late 2006 and early 2007.

Taking ORB’s estimate of 1.033 million killed by June 2007, then applying a variation of Just Foreign Policy’s methodology from July 2007 to the present using revised figures from Iraq Body Count, we estimate that 2.4 million Iraqis have been killed since 2003 as a result of our country’s illegal invasion, with a minimum of 1.5 million and a maximum of 3.4 million.

These calculations cannot possibly be as accurate or reliable as a rigorous up-to-date mortality study, which is urgently needed in Iraq and in each of the countries afflicted by war since 2001.  But in our judgment, it is important to make the most accurate estimate we can.

Numbers are numbing, especially numbers that rise into the millions. Please remember that each person killed represents someone’s loved one. These are mothers, fathers, husbands, wives, sons, daughters. One death impacts an entire community; collectively, they impact an entire nation.

As we begin the 16th year of the Iraq war, the American public must come to terms with the scale of the violence and chaos we have unleashed in Iraq. Only then may we find the political will to bring this horrific cycle of violence to an end, to replace war with diplomacy and hostility with friendship, as we have begun to do with Iran and as the people of North and South Korea are trying to do to avoid meeting a similar fate to that of Iraq.