Primary day in Illinois: Will moderates bite the dust in both parties? 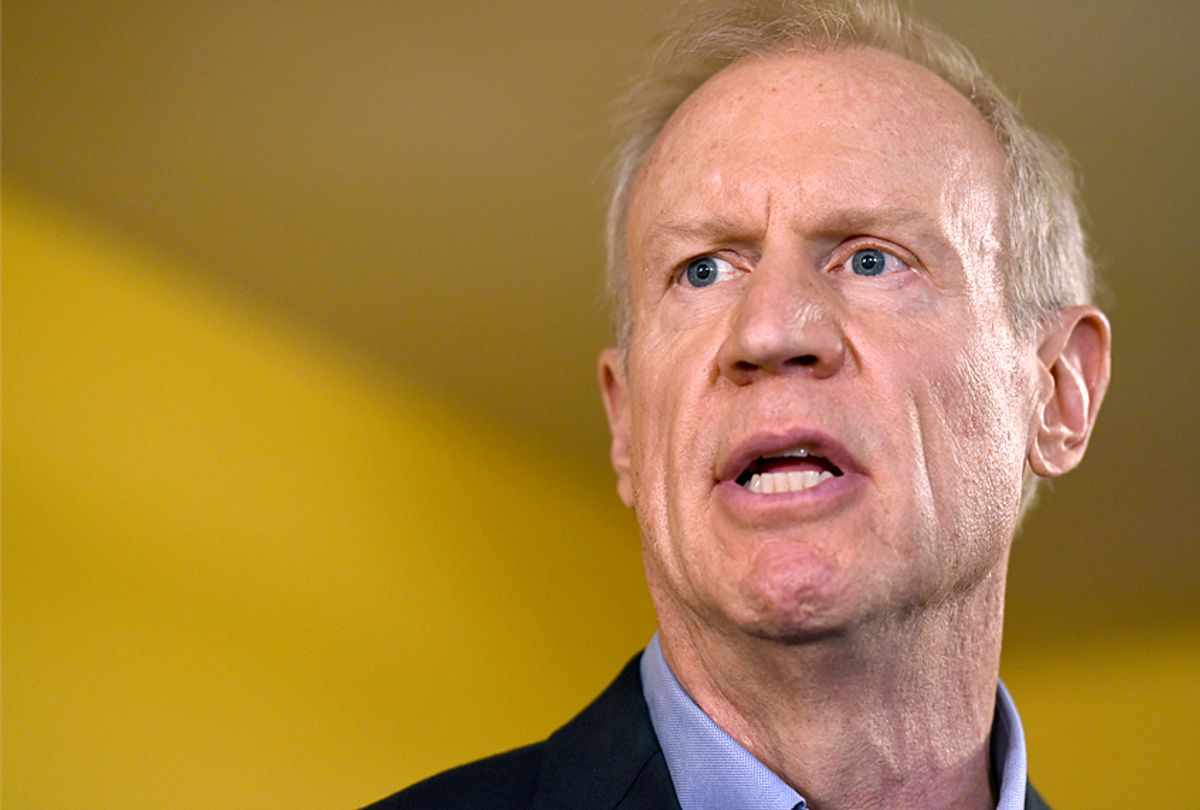 Incumbents in both parties are attempting to fend off major challenges from upstart candidates, in a set of Illinois primaries on Tuesday that could have major implications ahead of the midterm elections this fall. Notably, for both the Democratic and Republican incumbents, abortion appears to be the central issue galvanizing intra-party opposition.

Voters head to the polls in Illinois Tuesday for the second set of major-state primaries in 2018, following a vote earlier this month in Texas. Fresh off an energizing special election win in Pennsylvania’s 18th congressional district last week, Democrats are targeting four congressional seats currently held by Republicans — although the primary race getting the most national attention is in a solidly blue district.

More on that race later. The Land of Lincoln's marquee race on both sides of the aisle is for governor. Both of the billionaire businessmen leading the Republican and Democratic packs have helped to set a state-record amount of spending on ads in the lead-up to Tuesday’s election.

While venture capitalist and entrepreneur J.B. Pritzker appears ahead in the Democratic primary, billionaire incumbent Gov. Bruce Rauner is facing several Republican challengers. One of just five blue-state Republican governors, and the first GOP governor of Illinois in more than a decade, Rauner finds himself in a strange position: He could become the first incumbent Republican governor to lose a primary race in 90 years.

His major rival, Republican state Rep. Jeanne Ives, is a conservative firebrand who launched her insurgent campaign after Rauner signed a bill in late September removing a “trigger law” that could make abortions illegal in Illinois should the U.S. Supreme Court overturn Roe v. Wade. Rauner, who quietly campaigned as a pro-life Republican in 2014, had previously vowed to veto the measure. Ives' upstart campaign has received significant backing from Richard Uihlein, owner of the packaging company Uline, because of her anti-choice stance. According to Politico, Uihlein, who fancies himself the next Republican kingmaker in the mold of Steve Bannon’s elusive mega-donor Robert Mercer, has given Ives $2.5 million, after initially supporting Rauner.

One of the most unpopular governors in the nation, Rauner is best known for a disastrous two-year-plus state budget impasse. During the first three years of his administration, job growth fell to 2.3 percent, according to data from the Bureau of Labor Statistics. The rest of his somewhat confusing record – which includes proposed cuts to the critical breast cancer screening program, vetoing the first gun-control legislation sent to him after the recent school shooting in Florida and an opioid hotline — has left his supporters less than enthused.

Ives, a former Army officer and West Point graduate, has gone after Rauner hard, while he’s tried his best to avoid her, campaigning against Democratic leaders in the state instead. A recent poll showed Ives within seven points of the governor.

“Thank you, Bruce Rauner” is the tagline for Ives' most brutal (and most overtly Trumpian) ad. It depicts a young woman wearing a pink protest hat, thanking the governor for making Illinois families “pay for my abortions” and a hoodie-wearing man with his face partially hidden by a bandana thanking Rauner for making Illinois “a sanctuary state for illegal immigrant criminals.”

A billionaire with no previous political experience, Rauner has attempted to distance himself from an unpopular president with a similar profile. This gambit may have failed, however. The conservative National Review, which can hardly be described as a pro-Trump outlet, named Rauner “The Worst Republican Governor in America” and endorsed Ives. Another right-wing media outlet, funded by Uihlein, dropped a bombshell report at the 11th hour meant to paint Rauner as an out-of-touch elitist. The story alleged that Rauner’s wife, who managed to snag her own $100,000-a-year chief of staff amid the state’s budget impasse, told a closed-door meeting that "Bruce and I are moving to Italy," if Ives beats him on Tuesday.

To that end, the Democratic Governors Association, eager to stay out of a Democratic primary that still had a large number of undecided voters in recent polls, inserted itself in the middle of the Republican primary. "When is a conservative leader too conservative for Illinois?" asked an ad released in the latter days of the campaign by the Democratic group. Republican voters have appeared apathetic at the voting booth so far in the Trump era, and the DGA’s gamble is meant to boost Ives with the conservative base most likely to vote in the GOP primary. Democrats see her as an easier candidate to pick off come November. (It will be noted that they thought the same thing about Trump during the 2016 primaries.)

For her part, Ives has been eager to highlight her affinity for the president. She held one of the last campaign press conferences before Tuesday’s vote at Chicago’s Trump Tower, a symbolic gesture whose meaning was unmistakable. “The best thing about Donald Trump is that he stands for draining the swamp in Washington, D.C.," she said. "There’s no bigger swamp that needs to be drained in state capitals than the one in Springfield, and I stand for that.”

If Rauner loses to Ives, it will undoubtedly be seen as bad news for "moderate" Republican officeholders nationwide, especially those in states and districts won by Hillary Clinton in 2016. But Democrats running in apparently friendly districts also have reason to be nervous in 2018.

Running for his seventh term in Congress, Rep. Dan Lipinski, a Chicago Democrat, faces his toughest election battle ever on Tuesday. Elected in 2004 after his father won the Democratic primary and then convinced the party to let his son run in the general in his stead, Lipinski has been heavily targeted by progressive groups this year. He is co-chair of the Blue Dogs, a loose coalition of center-right House Democrats who have often made common cause with Republicans.

Lipinski voted against the Affordable Care Act and refused to endorse Barack Obama for re-election in 2012. He supports school vouchers and opposes stem cell research, and is one of the few House Democrats who consistently votes against abortion rights. His race marks the first time that the anti-abortion Susan B. Anthony List has canvassed for a Democratic candidate.

As the Chicago Sun-Times’ Lynn Sweet notes, “The heavily Democratic district was drawn by House Speaker Mike Madigan, D-Chicago, also the chair of the Democratic Party of Illinois, to protect Lipinski.” The district includes parts of Chicago and its western and southwestern suburbs, but despite winning endorsements from both of the city's newspapers, Lipinski has drawn a significant challenge from his left.

Unseating an incumbent is a difficult feat, especially for a first-time candidate, but Marie Newman is attempting to do just that. Backed by pro-choice groups like NARAL Pro-Choice America and Emily’s List, Newman is hoping that a district that has gone Democratic in the past four presidential elections is now ready for a #Resistance leader.

In her campaign ads, Newman claims that Lipinski "support[s] Donald Trump more than any other Democrat in Illinois." Lipinski has responded defensively, with a list of occasions when he has voted against the president.

“This is part of the reason Donald Trump won,” he told The New York Times earlier this month. “Democrats have chased people out of the party.”

For her part, Newman has the endorsement of Bernie Sanders, who won the district by eight points over Hillary Clinton in the 2016 Illinois primary. Clinton went on to win the district by 15 points in the fall. A poll released earlier this month by Public Policy Polling showed Newman and Lipinski in a statistical dead heat.

Whoever wins on Tuesday is virtually guaranteed a seat in Congress next year. The Republican nominee will presumably be Arthur Jones, a Holocaust denier and former member of the National Socialist White People's Party, who is running unopposed. The Illinois Republican Party has denounced his views and his candidacy, but was unable to find anyone else to run.