"The door is open": On "Billions," Asia Kate Dillon shakes up the macho finance world 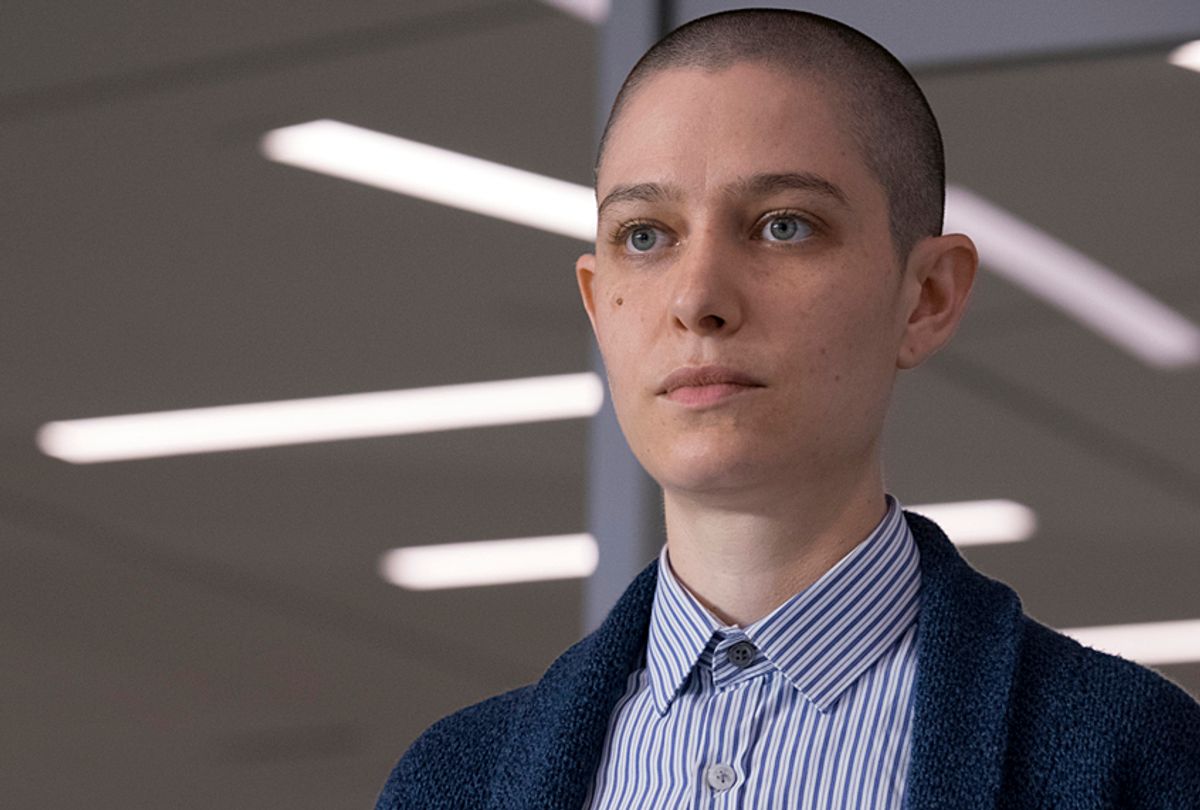 Asia Kate Dillon has an infectious, inquisitive energy about them which is apparent from a first meeting. They smile easily, sparkle in conversation and infuse each observation with a crisp excitement, even if it’s something they may have said a hundred times before.

Indeed, Dillon is the polar opposite of Taylor Mason, the character they play on Showtime’s “Billions,” returning for its third season Sunday at 10 p.m. Like Dillon, Taylor identifies as non-binary, a term used by people who feel their gender identity falls outside of the standard delineations of man or woman. Both Taylor and Dillon use the pronouns they and them; indeed, one of the most memorable scenes in the second season of “Billions” features Taylor calmly and assuredly telling their boss Bobby “Axe” Axelrod (Damian Lewis), one of the most powerful men in finance, how they are to be called – to which Axelrod did not blink.

“There is something that happens when you watch a white man give permission like that, that allows other people to think, ‘I might be able to do that,’” Dillon observes in an interview with Salon. “It is a powerful tool, and we are using it. It's one of the reasons I'm proud to be on the show.”

The addition of Taylor to Season 2 of “Billions” challenged the testosterone-fueled workplace at Axe Capital, where all the men on the floor obsess over who makes the most money and who's the most ostentatious at spending it, and where women are there to keep them aligned with their goals, such as Maggie Siff’s Wendy Rhoades, or are part of the victors’ spoils. Dillon’s performance received critical acclaim, and they were upped to a series regular for this new season.

Taylor is specifically written as female and non-binary, the first such role on North American television, and this throws their co-workers off-balance. What’s more, Taylor is effective, logic-driven and unflappable, an emotionally neutral character who dresses with crisp practicality.

Part of the fun of Taylor, Dillon says, is exploring the challenges of being non-binary in a very gendered, hyper-masculine environment. “It just goes to show that you don't have to be any particular way to work in the [venture capitalist] world, the hedge fund world. You really can be yourself, which is what Taylor is. It really puts the men, in particular, on guard. To check themselves and say, ‘Well, why am I being hyper masculine then? Do I need to be? Is that something I actually have to do in order to get ahead?’ Because, Taylor's not doing that and Taylor becomes CIO.”

Even so, Dillon infuses Taylor with an enigmatic quality vibrating just beneath the surface. It might be anger or hurt. It could merely be a tactic to discombobulate their opponents. One of Taylor’s more uncanny talents is to read people to the core while remaining inscrutable.

“Everyone has a different sort of perspective on Taylor on the show,” Dillon observed. "I think Taylor is full of emotion. Taylor is a fully fleshed out human being, but Taylor is very aware of when and how to titrate those emotions to get the best result, the best logical result.”

However, it bears pointing out that Taylor’s neutral affect has nothing to do with their non-binary identity.

“Taylor is one example of a non-binary person," said Dillon. "Like you said, it is very individualized. I think Taylor happens to be the type of person who, when they walk into a room they want to be seen as a human being first and what that human being has to offer. The way Taylor speaks, the way that Taylor dresses, is the way in which Taylor is doing that. Certainly Taylor's emotional life and the fact they are non-binary affect the way that they are in the world. But, just like anyone, it's not the only thing that affects the way they are in the world.”

Certainly not in this new season, which places an entirely fresh set of challenges into Taylor’s lap and, for the most part, allows Taylor’s abilities to outweigh their gender identity. An indicted and out on bail Axe appears to be dethroned and Paul Giamatti’s U.S. Attorney Chuck Rhoades is on his way up in the world of politics. Taylor, meanwhile, moves into the position of chief investment officer of Axe Capital, where their steel confidence serves to keep the place anchored despite the loss of its leader.

“Really the test for Taylor so far in Season 3 which is, what is morality, where is the line, when do you cross it, and when do you give it weight, and when don't you? I think ultimately that is the thing that every character on the show is dealing with. Which is, how to be a moral person, but also be who you are. And, if you're being who you are, are you being moral or not?”

Playing Taylor also aligns with Dillon’s directive of doing work that has purpose. Outside of “Billions,” they are the co-founder of the production company Mirror/Fire, a company dedicated to inclusivity through backing productions created by or about historically marginalized and disenfranchised people.

“One of the reasons I think Taylor is so well received, is that I have light skin — I'm white, for all intents and purposes — and assigned female at birth. If Taylor is a bridge into the world of non-binary, Taylor is an easier bridge than, say, someone who was assigned male at birth, who is a person of color, who wears make-up and dresses. Those people are still ostracized. We are making progress, and there is still more progress to be made."

Fortunately their role on the Showtime drama has grants them the exposure to assist in accelerating that progress, in ways they didn’t expect.

“Maybe it's a mother, or maybe it's an older self-identified straight male who’s white and 65, but sometimes I get a message that says, ‘I didn't know anything about non-binary and frankly I use to be homophobic or transphobic, but I love your character, so I'm now investigating’ — I'm paraphrasing here — ‘I'm now investigating how I could love that character.’

“That's just been incredible and gives me a lot of hope,” they said. “I think the conversation is happening now and the door is open. So, it's just about bringing more and more people through the door, whether it's educating people or bringing more roles in characters to the big and small screens.”