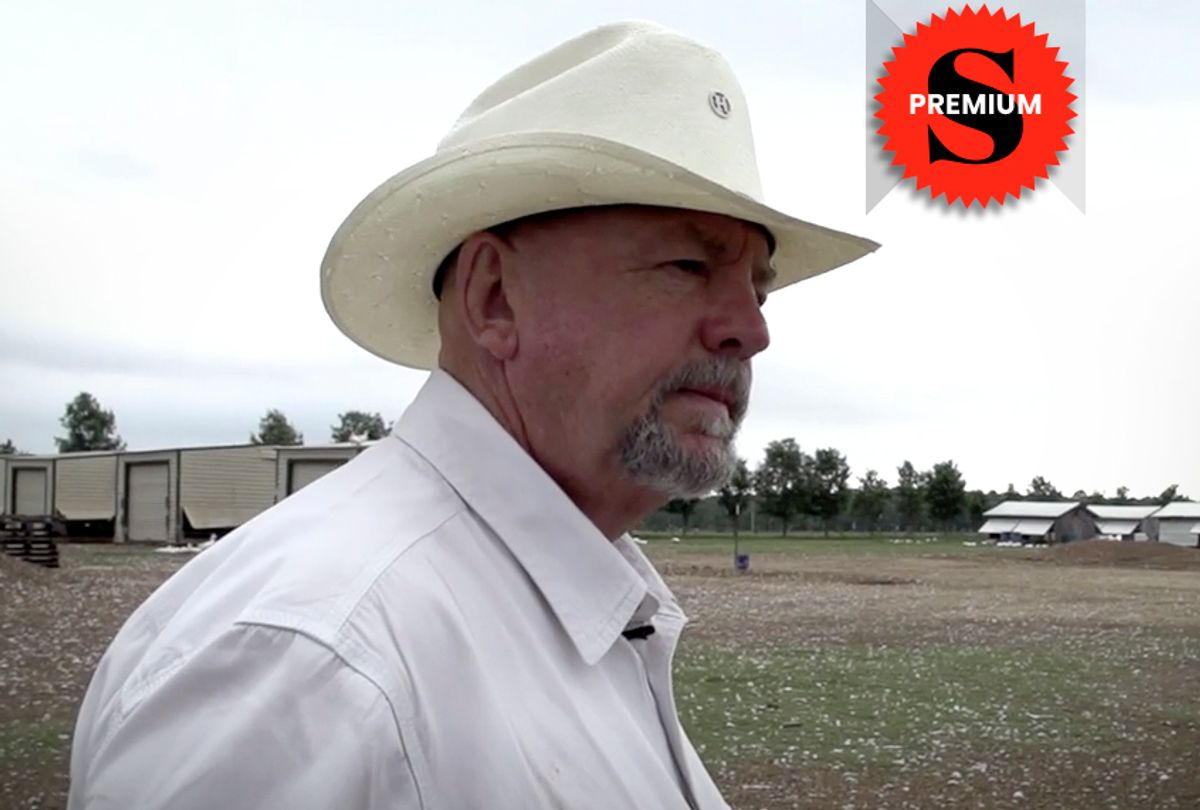 A still from "One Thousand Beating Hearts" (Peter Byck)
--

Will Harris, a good ol’ boy Georgia rancher, may well be our nation’s best bet for a better, more sustainable future. He's the subject of a documentary by Peter Byck, “One Hundred Thousand Beating Hearts."

You can watch the full documentary "One Hundred Thousand Beating Hearts"  on Salon Premium, our new ad-free, content-rich app. Here's how.

Salon talked to Byck, a professor at Arizona State University who teaches a film class for the School of Sustainability and Cronkite School of Journalism, about “One Hundred Thousand Beating Hearts.”

How'd you find Will Harris?

Our short film, “Soil Carbon Cowboys,” was well received in the ranching community, so when I was at a Grassfed Exchange conference, I was introduced to Will, and he invited me down to his farm, White Oak Pastures. It took me about nine months to then get down there to film.

He is such a great character. Tell us a little about what it was like to film him.

Will was a great person to film and to simply spend time with. He gave me all the time I needed.

He works hard. I work hard filming, and we came to a good mutual respect for each other. I’ve since been back to his farm with my oldest boy. And Will has left a standing invite to my whole family to come down and stay on their farm — they’ve got some great cabins in the woods.

How long did you film him?

I was with Will for three days straight. And then, a year later, I came back to film some more b-roll and the drone footage.

Tell us one story about the production.

When Will was taking me around the surrounding counties, to see the dying towns, small towns that had a strong agricultural base and that had been shriveling up due to poor economics for the local folks, we were filming along an old mill and rain was impending. I could see the coming squall down the road and it appeared to me to be about four minutes away. At about three minutes [out], when Will finished his answer to one of my questions, I grabbed the camera and tripod, told him we’d better run back to his truck, and as soon as we shut the doors, it started to really come down. He was impressed with my sense to read the rain. That made me feel good.

What's been your past interest in sustainable animal agriculture?

I look to regenerative agriculture, and AMP [adaptive multi-paddock] grazing in specific, as a potential way to draw down significant amounts of carbon from the air and store it in the soils. Carbon is the currency for healthy soils — and healthy soils produce healthy foods and help farmers to make more food on their land. My experience is filming farmers and ranchers across the U.S., Canada and the UK. These innovative producers of food are my heroes.

The School of Sustainability teaches our students all facets of sustainability; from creating sustainable cities that include people of all incomes to showing companies of all sizes that being sustainable is simply good business; waste is a sure sign of poor use of resources, which costs money. The journalism school uses the teaching hospital model, steeping the students in real world production of print, web and live TV newscasting. I teach a documentary class with students from both schools.

Where has the film been shown?

The film has won six or seven film fests and has been screened all over North America, and via Vimeo, around the world. We did screen an early version at Will’s farm, and it was very well received.

Ride shotgun with Will Harris on his ranch and smell the cow patties. Watch "One Hundred Thousand Beating Hearts" on Salon Premium, our new ad-free, content-rich app.