Why is the religious right attacking UNICEF? You might not believe the answer 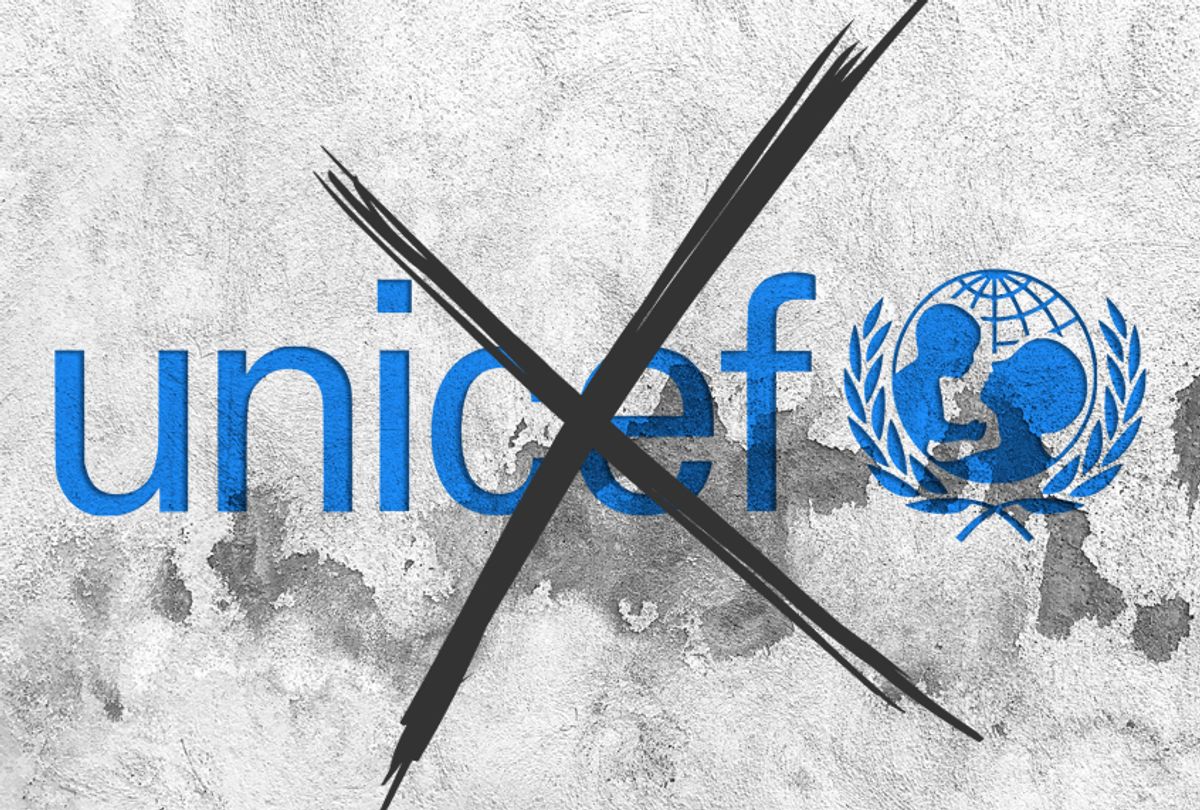 On Tuesday, people walking by UNICEF's headquarters in Manhattan were met with a strange sight: A group of protesters accusing the venerable United Nations children's welfare organization of harboring a shadowy pedophile agenda. They held professionally printed signs reading "UNICEF Sexualizing Children" and "Shame on UNICEF" while Sharon Slater, the head of a group called Family Watch International, accused the organization of "a hidden agenda that nobody knows about: to sexualize children."

One could be forgiven for dismissing these protesters as raving wingnuts spouting an outlandish conspiracy theories. Peter Montgomery, a senior fellow at People for the American Way, says it's more complicated than that.

“I don’t think people should take them lightly or laugh them off, as if they’re some fringe group," he told Salon. "Sharon Slater is very active at the UN, in partnership with other religious right groups that are active internationally.

“They’re happily working with the world’s most oppressive regimes to protect ‘traditional family values’ around gender and sexuality and family," he added, pointing out that Family Watch International has partnered with repressive nations like Saudi Arabia, Russia and Iran to hold events at the United Nations.

Tuesday's protest was being held to denounce UNICEF's support for comprehensive sex education, as part of Family Watch International's larger war against sex ed around the world. The campaign even has a website, StopCSE.org, which uses lurid language to scare parents away sex education programs that include information about consent, safety and diversity.

"Most CSE programs promote acceptance of diverse sexual identities and orientations and have an almost obsessive focus on sexual pleasure," the site says (emphasis in the original), "instructing children and youth at the earliest ages on how to obtain sexual pleasure in a variety of ways."

"UNICEF believes that children should have access to accurate, factual, age-appropriate information about relationships as they transition to adulthood," Najwa Mekki, the media chief at UNICEF, told Salon. "This can help them make informed decisions about relationships and sexuality and navigate a world where gender-based violence, gender inequality, early and unintended pregnancies, HIV and other sexually transmitted infections pose serious risks to their health and well-being."

If anyone in this conflict is obsessed with the issue of sexual pleasure, it might not be UNICEF. The materials Family Watch International provides to build its case against comprehensive sex education are centered on the idea that it's outrageous for educators to mention, in any way or at any time, that pleasure plays an important role in human sexuality. One Family Watch International pamphlet denounces a teacher's guide for noting that "sexual fantasy is normal and also that one does not have to act upon sexual fantasies," and for describing a healthy sexual encounter as one where "both enjoy it."

Refusing to mention pleasure in sex education seems like refusing to mention sound in a music theory class, but Salon turned to Debra Hauser, the president of Advocates for Youth — a group Family Watch International repeatedly demonizes — for a more in-depth response.

Hauser agreed that "it's obvious" to young people "that people have sex beyond just reproduction," and that young people "can sense it" if adults are disingenuous about this.

Hauser also noted that if the concern is safety, then it's of paramount importance that adults don't pretend that sexual pleasure is irrelevant to sex education. It's impossible, she argued, to teach kids about sexual consent without talking about what they want and explaining that sexual activity should be pleasurable.

Slater has spent years peddling the bizarre notion that kids will develop no interest in sex if adults never tell them that sex feels good. In 2016, for instance, she argued that Planned Parenthood was orchestrating "an intentional, targeted effort to get to your children and change the way they think about sexuality, to encourage them to engage in sexual activity" because it's "a business that makes money off ... condoms, abortions, contraception, STD treatment, HIV treatment."

In fact, sex education is linked to a delay in first intercourse with young people, probably because, contrary to Slater's relentless propaganda, teens are interested in sex even without their gym coach telling them what a condom is.

The anti-UNICEF campaign also has heavy overtones of homophobia. That's no surprise for Family Watch International, which was declared a hate group by the Southern Poverty Law Center because of Slater's history of supporting activists and politicians around the world who work to criminalize homosexuality. She argues that the threat of imprisonment will encourage LGBT people to "get therapy for unwanted same-sex attraction."

Slater may be a nutcase and a conspiracy theorist, but unfortunately she's one with a lot of pull. She's tight with Pastor Martin Ssempa of Uganda, the fundamentalist Christian behind that nation's "kill the gays" bill, passed in 2009. In 2016, Slater organized a group of 22 lobbyists to exert pressure on the UN's Commission on the Status of Women, where they argued for removing language about sexual rights and sexual orientation. And Donald Trump appointed Slater's close associate, Austin Ruse, as part of a delegation to the 2017 commission meeting.

At least one of Slater's stranger conspiracy theories has taken hold among American conservatives. United States. Along with Ruse, she has been the primary driver behind the rumor that the Girl Scouts work with Planned Parenthood to recruit girls to have sex with each other and become lesbians. This ludicrous urban legend has spread like wildfire, rearing its head on social media every year during the Girl Scout cookie drive, causing the organization no end of headaches.

Slater initially expressed interest in speaking with Salon about her views, but then her team stopped replying to emails.

“They view the culture war as global," Montgomery said of Family Watch International and their partner groups, such as Ruse's C-Fam. "This campaign against UNICEF is part of their broader campaign against comprehensive sex ed, LGBT equality, and reproductive health and rights."

He suggested that one reason the Family Watch International campaign has gone global is because, "in the United States, they’ve largely lost the battle of public opinion," especially on the subject of LGBT rights. By creating relationships with reactionary leaders all over the world — including Russian President Vladimir Putin — the group hopes "to give credibility to these traditionalist religious values, I think in hopes that it will eventually come back and help them in the United States." These days, unfortunately, it has an ally in the White House.