Belted out by my mom in a VW Beetle: a young boy's perfect Joni Mitchell moment

"I remember my attempt to sing along with her, though I didn't know the words or the tune or anything, I wanted in" 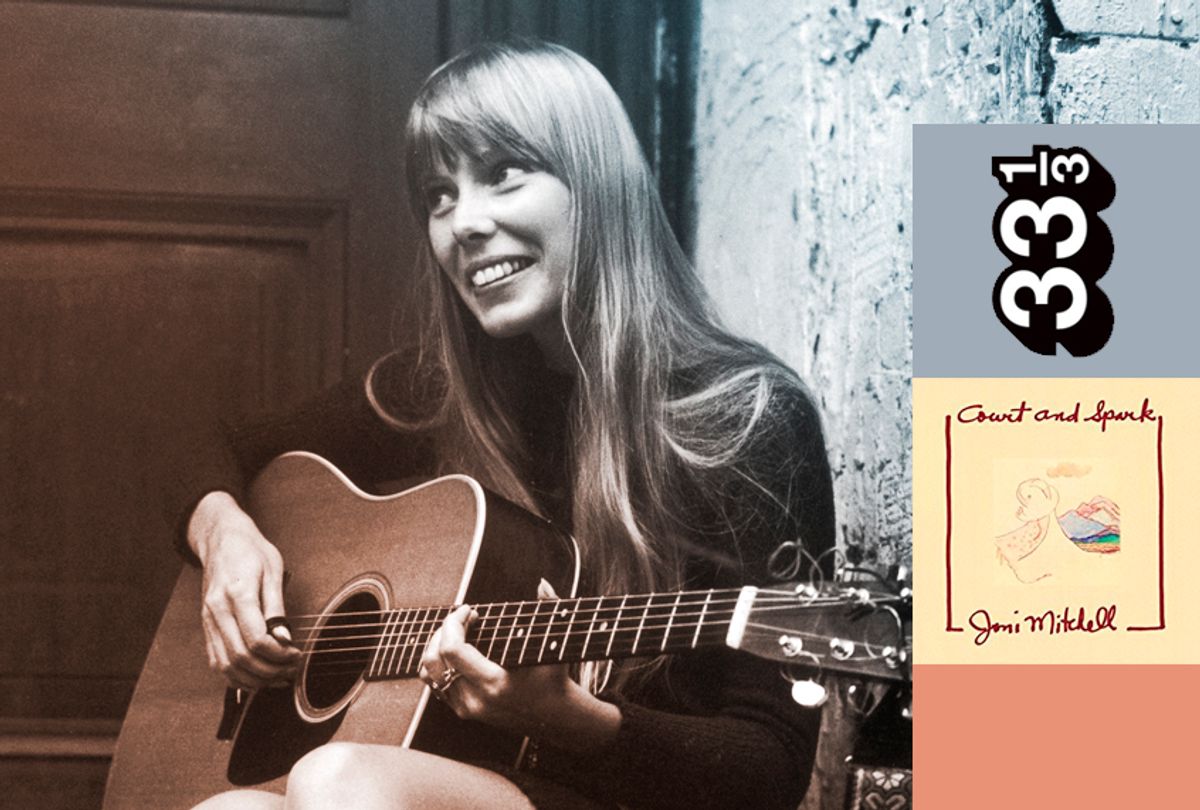 During her first marriage, my mother drove a navy blue, late 60s model VW Beetle with black and yellow California plates. I don't remember much about it, aside from my view of the smog-smeared mid-70s Los Angeles cityscape from its passenger seat. I usually rode standing up, without a seatbelt, using insect carcasses on the windshield as laser gun sights. I was eventually forced to ride sitting not because I grew too big for standing (the dome-ceilinged car was sold long before I managed that), but because I had worn away the upholstery until the brown stuffing and black coils underneath poked through the vinyl. With my mom at the wheel, I observed countless thousands of miles between the Valley we lived in and the rest of that sprawling, mysterious, romantic, horrible, beautiful city. In the faded film print of my mind, the sky is always yellow, verging on sepia; the flowers are bloody, pomegranate red; the streets are choked with cars and people trying to sell fruit or flowers or maps; and the hot brown sun is always aimed directly into your eyes.

I don't know what year this one specific event occurred, but it could've been any time between 1974 and 1979. My mother was driving a familiar route through the serpentine fistulas of Laurel Canyon on some errand or other. I often became carsick on these winding drives, and she always tried her best to distract me from nausea as best she could, which usually meant promising to buy me a soda when we got down to the Laurel Canyon Country Market (this meant we were past the worst of the curves), and listening to the car radio. One hot late afternoon, with the windows down, and the brown sunlight pushing through the sagging pine and eucalyptus branches, whichever song was on whatever station cross-faded into a pattern of gentle, insistent guitar strumming that made my mom gasp with delight, turn the volume up high, and start singing along with the high, dusty female voice that followed (after a quick, six-hit drum fill).

"Help me, I think I'm fallin',” she sang, then paused briefly with the singer, then continued, “in love again..."

Though commonplace enough on its own, the memory has stayed with me through at least a couple of decades, because it was the first time I'd ever heard someone (and not just any someone) sing along with a song she knew on the radio. It just happened, as though the radio knew exactly what she wanted to hear and forked it over. And she rose to the occasion, singing unabashedly, with full-throated participation in one of the most genuinely life-affirming rituals invented by the twentieth century. I remember my surprise when it started, and I remember my attempt to sing along with her, though I didn't know the words or the tune or anything, I wanted in. And when the song was over, I remember being disappointed that she didn't sing along with whatever song came next. Or maybe it was a commercial. My memory is vague on this point. But I've been a devout singer-along ever since, much to the consternation of many driving companions–given that the world is obviously divided into two groups, and the ones who don't can't stand the ones who do.

Another first: noticing the way the song's words led you to believe one thing was happening, only to turn left and surprise you, all within the space of a single line. “Help me, I think I'm falling...” not from a cliff, not off a building ledge, not even into a lava pit (all fates that had featured in my young nightmares), but “in love," which, one assumes, is meant to be a good feeling. And that “again." So much worldly information in so little space, and presented so naturally. The Beatles, whose records were the only things my parents ever let me touch and who therefore were the only band I really knew and loved, often played verbal tricks, but I hadn't dug deep enough to appreciate their finer points. I mean, I understood that “I once had a girl / or should I say, she once had me” was a twist that probably meant something, but I had no idea what; I was still stuck on “the movement you need is on your shoulder.” (And anyway, Beatles lyrics aren't so much good as they are perfect, but let's not get anywhere near that discussion...) I had no idea then, but this chance encounter with Joni Mitchell had just provided me with the beginnings of what would become a lifelong thralldom to the expressive possibilities of pop songwriting.

And let's not forget that this whole scenario was made possible by the radio–possibly AM, probably top-forty, definitely commercial. I knew that people sang along with records; I was just beginning to familiarize myself with the practice, But records required intention. You buy it, you learn it, you play it, you sing it–and if it has a lyric sheet, so much the better. The idea that the music could come to you was brand new, and thrilling. The next step was realizing that other people–friends, strangers, mothers, sons–were out there hearing it at the same time you were, and also singing along. The fact that it was a Joni Mitchell song and not one by, say, Stevie Wonder, Paul Simon, Jackson Browne, the Bay City Rollers, or the Eagles, was incidental, but only at first. As years have gone by, I've conferred a great deal of meaning on the “Help Me" episode, not only for its small but significant expansion of my young pop consciousness, but because it opened a door into the work of one of my all-time favorite recording artists.

Joni Mitchell's albums, particularly the ones she made between 1971 and 1975, have become essential components of my musical lexicon. The fact that "Help Me” is far from my favorite Joni Mitchell song (it's not even my favorite on "Court and Spark"), matters less than the fact that it was my first Joni Mitchell song. And that only happened because it was catchy, clever, universal, and well constructed enough to become the biggest Joni Mitchell song, before or since, on the radio, reaching number seven on Billboard's Pop Singles chart, and number one on its Adult Contemporary Singles chart. In the years that have elapsed since that Laurel Canyon afternoon, I've gone back and forth many times about the relative value of singles charts in determining a song's worth. I intend to go back and forth many more times. One thing that can't be argued, however, is the insufferably pompous entertainment industry maxim that a hit is a hit. (Some things are true even if music biz weasels say them.)

Sean Nelson has recorded and performed with Harvey Danger, Death Cab for Cutie, The Decemberists, Robyn Hitchcock, the Minus 5, The Long Winters, and many others. His writing has appeared in/on Pitchfork, The Los Angeles Times, MTV.com, The Talkhouse, Entertainment Weekly, MSN, Alternative Press, The Seattle Times, Seattle Weekly, The Portland Mercury, DIW, and Heeb Magazine.