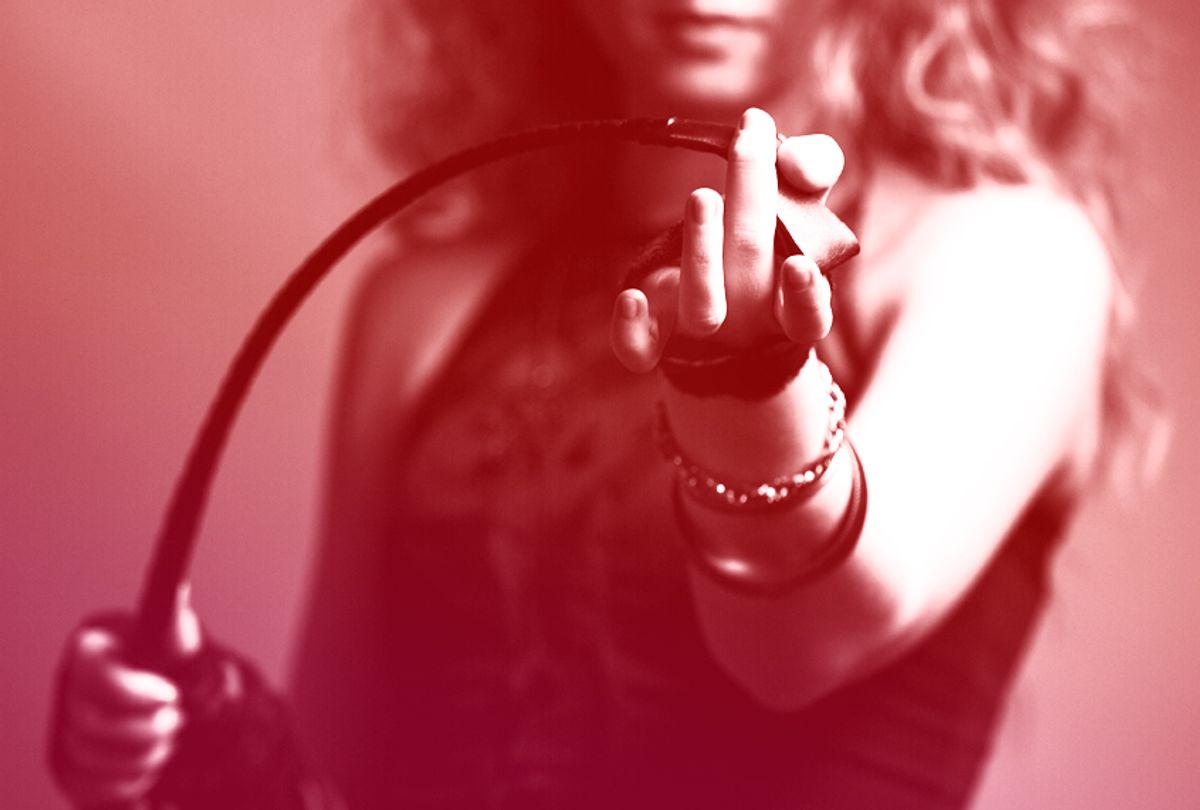 A man takes a seat next to me at the Mandrake’s long bar. It’s a low-ceilinged local haunt, frequented by artists and designers leaving work at galleries along La Cienega Boulevard, stalling their long eastward commutes toward the gentrifying East LA neighborhoods they call home. He asks the bartender for a whiskey and slides an unmarked envelope toward me. It touches the base of my sweating highball glass, condensation blooming onto the otherwise crisp, white envelope. I pick it up and make eye contact while working my finger into the crease, discreetly counting the cash before stuffing it into my purse.

The man wraps his thick, hairy knuckles around his bourbon, tips the beard behind the bar, and sets his eyes on me, initiating the role play: “Come here often?”

“Is that all you got?” I bait him. He fumbles. He’s reciting a script we all know well, and he’s not adept at improvisation.

A sly smirk pulls at his mouth. “I would love to see you come,” he says, and takes a sip of his drink. He stares straight ahead, surprised at his own audacity.

A moment passes. I straighten my dress, feigning shock, and yell loudly enough for the entire bar to turn, “I wouldn’t have sex with you if you were the last man on earth!”

I stand to go, watching his cheeks flush hot with shame, the feeling for which he has paid me. I consider pouring my drink on his crotch like they do in the movies, but I don’t want to make a mess for the bartender, who didn't agree to participate in this humiliation scene in the first place.

With a firm “no,” I raise my hand to his mouth to prevent him from protesting, storm out of the bar and into the unseasonably warm night. I count again — three hundred dollars — on the walk to my car. In traffic on my own commute home, I think of a conversation with a friend the week prior, in another dim-lit LA bar. She recounted the frustration of dating straight men from Tinder, the hours she’d spent that weekend, locked in tedious conversation with an unkempt man who looked nothing like his profile photo. I ask why she didn’t just get up and leave. “I couldn’t,” she says. “I was afraid.” I sit in traffic, feeling like I’ve gotten away with something. It isn’t just the money. It is that I am able to say “no.”

Every “no” I speak is not uttered in public, at happy hour, with a bar full of hipsters watching, where I feel relatively safe from any potential backlash. Most of the time, when I refuse male advances, we are alone, in private dungeons or hotel rooms, and the men who hear “no” follow it up with protests: “Please, Mistress, please . . .” They beg, make promises and often refuse. Sometimes these refusals are pre-negotiated, part of the fantasy; often they are not. Before #MeToo revealed the frequency at which professional relationships between men and women have been marked by the breach of consent, I thought these clients simply considered my refusals part of a kinky game: rules that were made to be broken because they were made in a dungeon. Now I see these men differently. I imagine them hearing “no” at work, pushing their female co-workers toward the “yes” they are confident that can receive if they persist. I imagine them boasting to friends: “At first she was reluctant, but then I convinced her.” Often, they tell me stories of refusing to take no for an answer, how it’s a skill that has helped them succeed in business. I wonder how often it’s helped them succeed in sex.

Before training as a BDSM professional in 2012, I had little intimate contact with men. Lesbian-identified since junior year of high school, I hadn’t even seen a naked man since the fumbling sexual explorations of teenage romance. I embarked on my side hustle of bondage and discipline with a clean slate in regards to heterosexual intimacy. While the vast majority of my professional explorations of kink, gender deviance and sexuality with my (mostly) male clientele are rewarding, safe, and even inspiring, I quickly realized that while I was playing the role of the woman who says “no,” like every other woman, I was very much expected to eventually say “yes.”

Clients tell sex workers their deepest fantasies, which most would never reveal to their wives and girlfriends. I have helped countless men who have been shamed for their feminine sides to embrace them, dressing them in lace and introducing them to the tender caresses they believe only women can request of their lovers. For others, I provide the pain that they crave, when their partners see them too clearly as husbands and fathers, making it unbearable to watch them bleed. Most of the time I welcome this, and consider vulnerability an alleviation of the pressures of masculinity, pressures that often lead to its toxicity. Sexual aggressiveness, domination of others and misogyny — these qualities coagulate into a strain of masculinity that is unable to form connections with others, especially women, ultimately hurting the men who engage in this toxic form of masculinity. So when I encounter men with deep-seated kinks and fantasies that complicate the dictates of toxic masculinity, I encourage them, hoping that access to submissiveness in their fantasy lives might positively influence their day-to-day.

And yet, vulnerability implies a close relationship to the truth, and the truth is that men often violate women. The same culture that produces men ashamed of their desires to put on a dress and feel pretty for the evening also produces the man who excitedly recalls spending weekends traveling to far-flung queer bars, waiting in parking lots and drinking vodka in his car until he sees some lesbians emerge, calling them "dykes," "man-haters" — hoping one would be offended enough to assault him. Now, he calls me — a self-identified lesbian dominatrix — and pays me to kick him in the balls. Am I the safety valve our culture requires, protecting other women from his homophobic attacks? The emotional toll the word "dyke" takes on me is no different that the toll it takes on other queer women who have also been on the receiving end of the insult since adolescence. I no longer feel the hurt bubbling into my throat when I hear the word today, but on the lips of a straight man, it still ignites something deep in me, and I channel the sting of it toward the task at hand. I count my money and weigh the consequences.

Over dinner, a client tells me the story of his most memorable sexual adventure: when he walked down the Vegas strip in thigh high boots and a trench coat, opening it to reveal his erect penis to a mother and daughter. The shock on their faces, and the way the mother covered her daughter’s eyes, is still the material to which he masturbates, years later. He presents the qualification that the daughter looked of age, as if that exonerates him. I listen to his story and say nothing. I tell myself that he is baiting me, waiting for a reaction that I refuse to provide. But the truth is I can’t afford to lose him as a client. I’m no one’s safety valve.

Despite my due diligence in screening clients — requiring references and refusing to schedule anyone who seems erratic or disrespectful — and despite the stereotype that submissive men are safe, a client has reached around my waist, pulled my panties to the side and shoved his fingers inside me. These are not the roles we agreed to play. I said nothing in the wake of this assault, freezing in his presence and then for years in its aftermath, silently blaming myself. While sex workers are too often seen as immoral repositories for normalized male violence, criminalization and stigma make it difficult for us to pursue justice in cases of assault. Other women who have been assaulted at work face demotion, escalation and the accusation of false testimony; sex workers face all of this, as well as the threat of arrest: as far as law enforcement is concerned, we could face criminal charges ourselves if we name the men who assault us.

Sex workers, like all women, are fighting the battle against toxic masculinity. As I was writing this essay, a man approached me in a coffee shop, said “hello” and proceeded to stare at the side of my head, waiting for me to stop writing and turn my attention to him. I tried to channel the strength of the archetypical dominatrix, to ignore him and keep writing. I am a woman who dominates men in a professional setting, but this was not a role-play scenario, and we were not in a dungeon. I was just another woman, expected to affirm a man in a public place. He must have heard my implicit “no” as I sat and wrote, refusing to answer his greeting or meet his gaze. Yet he persisted. And like women are expected to do, I gave in. When it became clear that he would not relent, I paid him the attention he was seeking: I turned to him and politely let him know that I was working and not interested in conversation. He moved a foot closer, close enough so that I could smell the stale white wine on his breath.

“I didn’t want to talk to you anyway, bitch.”

In the wake of #MeToo, it is depressingly clear that a woman’s freedom to say “no” exists in the realm of fantasy. In our culture of normalized sexual violence, those fantasies — quite like the fantasy of female domination — seem futile. But still, we work and we hope. Like the journalists, actresses, lawyers, baristas and all other women who have had the courage to stand up and say, "me too," sex workers are on the front lines of this fight.