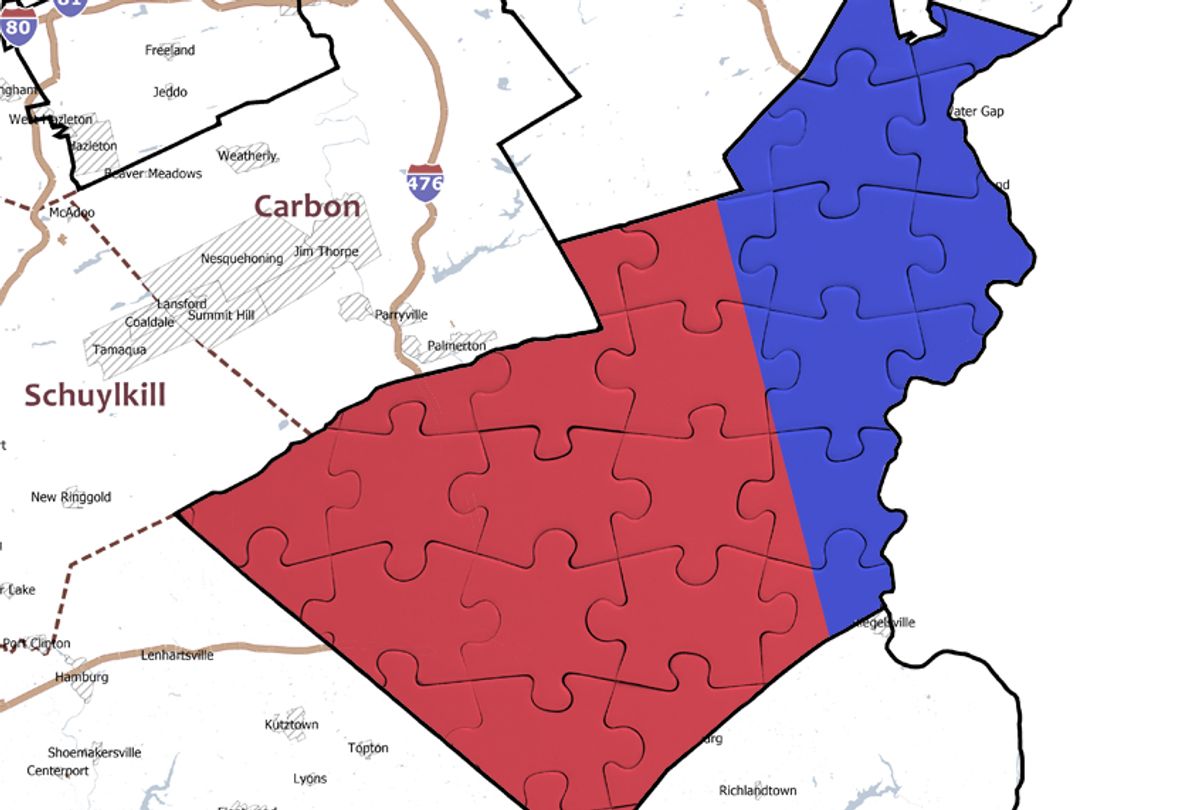 Let's say this for Pennsylvania's newly redrawn congressional map: The Lehigh Valley is one of those areas that just seems like it should have its own House district. Separating Northampton and Lehigh counties, as Republicans did when they gerrymandered the Lehigh Valley in half earlier this decade, always felt unnatural.

Defined as roughly the parameters of the Allentown-Bethlehem-Easton metropolitan area in Pennsylvania (with some overlap into western New Jersey), the valley already has about the population of an average congressional district. Northampton and Lehigh counties together fall just shy of 700,000 residents, while the average congressional district has 711,000. Much of the region has been represented by Republican congressmen for the last 20 years — first the highly conservative Pat Toomey (now one of Pennsylvania's senators), then the more moderate Charlie Dent (who is retiring this year, like a startling number of GOP moderates). Democrat Matt Cartwright now covers a large chunk of the Lehigh Valley, thanks to it being bisected by state Republicans.

Overall, anyone who tunes into casual political conversations at the bars and barbershops, college campuses and street corners of the Lehigh Valley will find a healthy mix of opinion: liberals, conservatives, moderates and even some radicals. Like Pennsylvania as a whole, this region supported Democratic presidential candidates in every election from 1992 to 2012. In 2016, Lehigh County again went to Democrat Hillary Clinton, but Northampton County went to Donald Trump.

This means that the newly designated 7th congressional district could pick just about anyone to be its next congressional representative, a fact with major implications for the rest of the country. The Lehigh Valley's diverse demographics profile makes it something of a microcosm of the nation: It's a swing region in one of the swingiest of swing states. (We have 20 electoral votes, the most of any of those fateful Rust Belt states that went to Trump.).

This area's history is also compelling: The region flourished in colonial Pennsylvania and again during America's steelmaking heyday (Bethlehem Steel is a stone's throw from my apartment), but experienced a slump when steel declined in this country. By 2014 it had recovered enough to be recognized as the second-best-performing American region of its size in terms of economic development.

Amidst the jockeying for the Democratic nomination in the 7th district, four names seem to have emerged as frontrunners. Perhaps first among them is former Lehigh County Democratic chairman Rick Daugherty, the party's congressional nominee in 2012 and 2016, who did not return calls requesting an interview. Then there's Northampton County District Attorney John Morganelli, a moderate who has stirred up controversy for supporting Republicans and wishing Trump well after the 2016 election, but who could conceivably win the primary if liberal Democrats fail to unite around a single candidate. The Bernie-style progressive in the race is clearly Greg Edwards, a local pastor who speaks eloquently about economic justice. Lawyer Susan Ellis Wild, who became the first female solicitor of the city of Allentown, was recently endorsed by EMILY's List, a political action committee that strives to elect pro-choice Democratic women.

There are no women in Pennsylvania's current congressional delegation, a fact Wild described as a "travesty" in an email to Salon. Her campaign stemmed in large part from "having both a president and a Republican Congress that not only never cared about women's issues, but are now taking even more extreme anti-gender-equality positions," she continued. The EMILY's List endorsement "isn't simply because I'm a female candidate who supports their issues," she said; "they're a national group that has to spend their resources wisely, and they viewed our campaign as the strongest in a must-flip district for Democrats."

Wild identified a number of issues that she considers most important: protecting Social Security and Medicare, providing health care for all ("the ACA was a great start, but we can do better, and I look forward to putting us on a path toward universal health care coverage") and campaign finance reform.

"I’ve run as a strong progressive in this primary and I’ll do the same in the general," Wild said. "I understand that after 2016 people feel that there’s a divide on the left — the Bernie faction and the Clinton faction. ... But I don’t buy into the narrative that you can’t run as a strong progressive and be a unifier. I intend to unite all Democrats; when we have division in the party, it only plays into Republicans’ hands."

Wild argued that the Democratic Party doesn't need to be defined by the ideological feud of party in 2016. Edwards rejected the notion that the "moderate" and "progressive" labels affixed to those candidates were even healthy in the first place.

"Labels are for those that try to categorize and oftentimes put in a box," Edwards told Salon. "We are running on a very progressive platform with the understanding that we all do better when we all do better, in the words of [late Minnesota senator] Paul Wellstone. The reality is, I’ve never met anyone in the last seven months who wants moderate healthcare, who wants a moderately well-paying job, who wants their child in a moderately well-funded school, or who wants moderate gun control.

"I don’t know if you would say that’s conservative or liberal, but I think that those are topics that resonate well with this district. How you see those topics, I think, depends upon your own political ideology."

Like Wild, Edwards identified health care as a "major issue." He also insisted that Pennsylvania improve the quality of public education for low-income residents, provide universal preschool and debt-free college, and help immigrant communities. "The Lehigh Valley is a large migratory spot for people of Latinx heritage, and that’s a critical issue that we have to address."

While Morganelli also identifies health care and immigration as important issues, he has taken a more moderate stance on each than Wild and Edwards, and on immigration is far closer to Republican positions.

When it comes to health care, Morganelli told Salon, "I’m in favor of maintaining something that works and then it’s good for folks. Right now, we have Obamacare and it is working. Yes, there’s flaws in it; I think we all recognized flaws but it has lots of good aspects." While Morganelli says he would vote for a "Medicare for all" bill and believes "we have to move in that direction," he also believes "it’s not going to happen right now. Even if the Democrats regain control of the government and that includes the presidency, the Senate, and the House, this is a heavy, far reach."

Morganelli takes a much harder line on undocumented immigrants than is common for Democrats, however, clearly playing to disgruntled working-class voters who believe such immigrants are taking jobs or driving down wages. "I don’t believe  illegal immigration is a plus for our country and I’ve been tough on that," he said. "Some people might just view that as a more conservative approach. I don’t like labels. I view myself as a moderate. ...  I’m not going to put myself in some ideological box just for the sake of trying to win votes."

It's easy to perceive the Democratic primary battle in this district as a small-scale repeat of the Clinton-Sanders primary two years ago. Whoever prevails, it would appear, will send a larger message to the national Democratic Party. If Morganelli emerges triumphant in the primaries, it will demonstrate that a moderate approach can be more effective in swing districts like the Lehigh Valley. If Edwards or Wild gets nominated — and wins the general election — it will suggest that progressives are on the verge of a national breakthrough.

But all the Democrats in this race agree that a win in the general election is essential, to prove that not only Trump himself but Trumpism are losing their political currency.

"The reality is that Donald Trump is not our sickness. Donald Trump is a symptom," Edwards told Salon. "Impeaching Donald Trump could certainly happen, but the reality is, it still does not take the racial toxicity out of Washington, D.C., that he has helped to galvanize." Edwards argued that the bigger problem was how the Republican Party goes "around the nation investing in far right-wing candidates who are undermining democracy."

Edwards is right about the modern Republican Party, but that's only half of the equation. The reason gerrymandering is such a terrible political evil — and I do not use that word lightly — is that it divides communities like the Lehigh Valley in order to create artificial one-party rule. Even those who oppose our rigid two-party system will likely agree that some competition is better than none. But partisan competition is only valuable if the parties choose quality candidates. We can see clearly that the far right has taken over one of our major parties, but that recognition means nothing if the other party doesn't do its job.