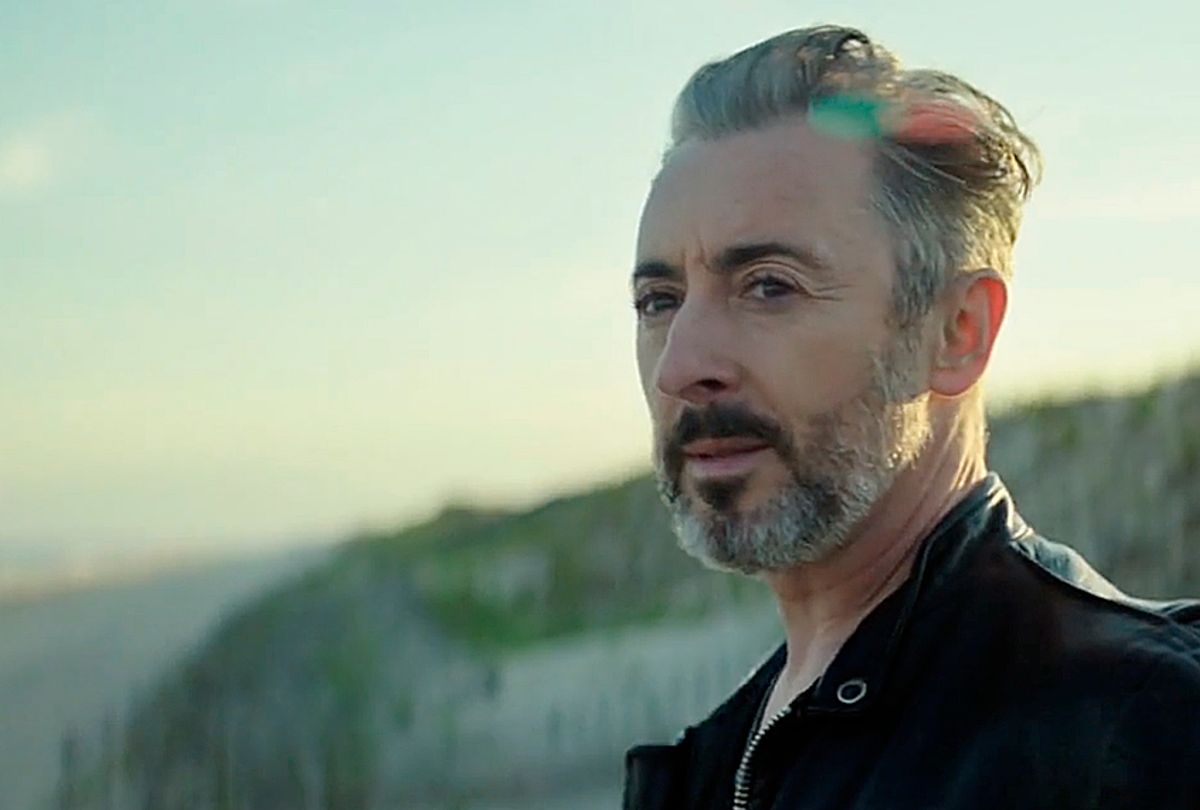 In “After Louie” Cumming plays Sam, a single and grieving gay activist and artist who is adrift in his life and his career. A project he has been working on for far too long is still unfinished. He criticizes his friends Jeffrey (Patrick Breen) and Mateo (Wilson Cruz) for getting married and conforming to social codes. He meets and pays Braeden (Zachary Booth) for sex, unaware of the fact that Braeden is not an escort. As Sam keeps “hiring” Braeden, he tries to impress upon the younger gay man the struggles and strides the gay community has faced over the years. He also aims to create a legacy.

Alan, congratulations on the film . . .

I hope you’ll point out that I got your recording device going.

Yes. I’m going to write about your technical savvy!

I’m all over this! I’m down with the kids!

Sam feels he must do something important and create a legacy. You seem to balance your career between fun and important projects; pop films and indie films, even gay films and straight films. You’re doing a TV series now, you have a club. You’ve written books . . . Can you talk about the idea of legacy and career?

Gosh, that’s a huge question! First of all, I don’t think about my legacy. Not until you asked this question have I thought about my legacy. What I mean is: I don’t make decisions about what I do based on what I think my legacy is going to be. I just do things that I feel are right for me at the time.

But I am also aware of my impending death, and great age, and I come into contact with people who tell me about how I have affected their lives. So, my legacy, I would hope, would be connected to Club Cumming — but that is a portal for everything I stand for, which is inclusion and fun and kindness and sexiness and challenge. So, I’d rather have that be my legacy than some of the films or plays I’ve done. My message as a person is more important than my work. Wow, that was a lot. You set the bar high.

I go highbrow, I go lowbrow. Should I ask the naughty question next?

Why do you think Sam pays for sex? And by the way, I love that you did a nude scene. I think your body looks like my body.

What does that mean?

It means that I rarely see a man of my age, with my physique, naked on screen.

A real 50-something man. Thanks! It’s true! You don’t get to see that.

But back to the question: Why do you think Sam pays for sex?

My way of getting around it in my head was that he was once rich and helping out people, but also, he knew if he paid for sex, he knew he could feel intimacy and not have to explain his desires to people.

Yes, I thought it was his inability to connect with people.

I think that’s the same thing. Mine’s a more flooded way of saying that.

Do you think Sam is sentimental, focusing on the “good old days?” One friend says he is “grave digging,” trying to revive the past. How do you identify with his character?

It was very difficult for me not to be charming. In my life, I always try to make people like me when I’m telling them something they don’t want to hear. Like when I don’t want to take a photo with you, here’s the reason why. Sam doesn’t do that. I’m rarely asked to play people who are not likeable. Even a baddie can be flashy, but Sam, when you meet him, there’s nothing really about him that is charming.

How did you find your inner bitch?

I just do the script. I don’t have to unlock it. I wasn’t mean between takes. I’m an actor. But I loved this part because I rarely get asked to do something like this. I’m not brooding. I’m not a brooding sort of person. But I brood in this film. [Cumming’s Scottish accent is swoon-inducing when he says “brooding.”]

Sam seems to be rather self-loathing. I also think he has survivor’s guilt. What observations do you have about Sam’s feelings of humiliation, shame, and inadequacy?

I can imagine those qualities. I don’t have them. Just because you can do things that you don’t have as a person doesn’t make you a good actor. You can fake it. I fake it as Sam, who is all the things you said. He has shame and not a lot of self-esteem. I’m really not that person.

I am a sexual being, and I’ve noticed as I’ve gotten older — I’m in my sixth decade — most of the people my age, I stop having conversations about sex with them. Our sexuality becomes less of a thing.

I still feel I’m as sexually active as I was in my twenties, and that has infused my work. As a man in my 50s, there has not been a slow-down in the way I feel about sex at all.

I love that that scene works because it was one of the most annoying scenes of the whole film. I was so furious . . .

Furious to have to do it?

No, not at all. Nothing in the film I’m furious to do. I agreed to do it, and when I agree to do something, I fully embrace everything I have to do absolutely. There were some extenuating circumstances that night when we shot. I was naked and covered in paint and they had not thought it through that we might need a shower afterwards. And I asked, “Where are we showering?” And they said, “We’ll drive you in a taxi about 3 miles to this hotel in Williamsburg.” And I thought, “You’ve got to be kidding me!”

What observations do you have about the progression of political gay culture — from AIDS activism, we now have PREP, to marriage equality? What are your thoughts about “how far we’ve come”?

I think there’s been lots of progress made in terms of legal rights of certain citizens who have been neglected, and I am connected to that. Great things have happened medically, where people who have felt shameful about sex are now able to not be so shameful because they are not afraid of dying. There have been huge strides made, but we still have a long way to go.

I still think it’s terrible that PREP costs so much and that it’s difficult to get, and they charge you many, many, many times the cost of it. The bigger question is why do we live in a culture where the pharmaceutical and insurance industries dictate so much of health care.

Sam is very candid and says what he thinks. [Cummings laughs] But it doesn’t do him any favors. What can you say about this quality of his, and how outspoken you can be?

Sam’s outspokenness hasn’t done him much good, but my outspokenness has done me much good. One of the reasons people connect with me—as an audience and people who like me—is because I am an authentic person. What you see is what you get. I’m not afraid to say how I feel about things that are important to me. In America, I think that everyone is very scared to risk a judgment or risk an opinion. I’m just not like that. But I don’t see myself as being noble for that. I just see it as being a normal person. And I don’t see why being a celebrity makes you have to be silent about what you feel.

I was one of the producers on “After Louie,” and a slightly low-functioning one. Producing is making your own work and trying to get things made that you believe in. I do that in other ways, like writing books, doing my concert tour, and my TV show, where I’m an executive producer as well. As you get older, hopefully you harness your fame to do things you want to do.