Democrats do it too: Maryland's "forgotten gerrymander" reaches Supreme Court

Republicans have perfected the gerrymander. There's one clear Democratic case in Maryland, and it's a doozy 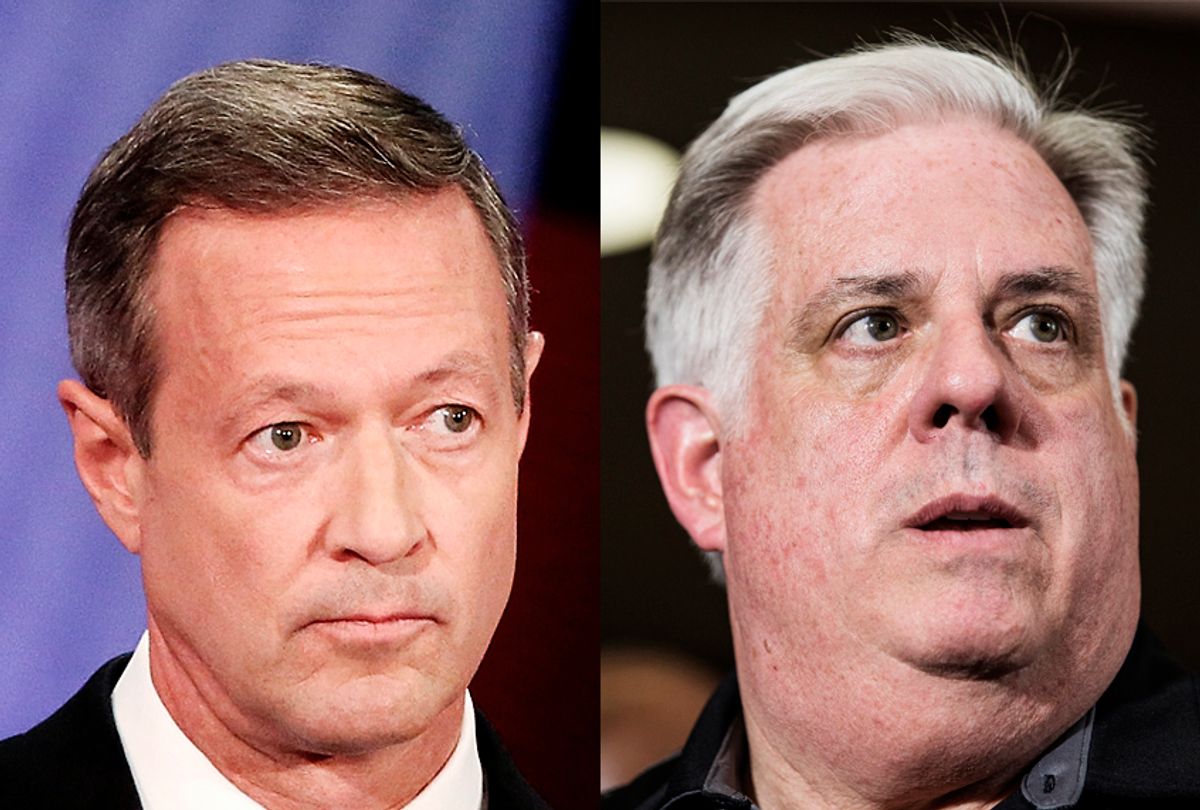 Forgotten, perhaps, in relation to the Republicans' wider and more ambitious efforts to dominate redistricting after the 2010 census. But when Maryland Democrats redrew the state’s congressional maps, they shuffled 375,000 in or out of the state's sixth congressional district, the most complete makeover of any district in the country. Next week, Maryland’s sixth will be under the national spotlight when the U.S. Supreme Court hears oral arguments in Benisek v. Lamone, the latest case that aspires to make partisan gerrymandering unconstitutional.

“It’s absolutely outrageous,” says Hogan, who spent his first term pushing Democrats to sign onto genuine nonpartisan districting with no success. He’s joined current Ohio Gov. John Kasich and former California Gov. Arnold Schwarzenegger, both Republicans, in an amicus brief that essentially pleads with the Supreme Court to take actions because the politicians are unable to stop themselves from drawing crooked lines.

“Both parties are just as guilty in different states depending on who has control,” Hogan says. He readily concedes that his party took greater advantage of redistricting after 2010, but can’t believe “hypocritical” Democrats won’t talk honestly about how they rewired Maryland’s democracy. “This is a unique situation where the current attorney general of Maryland was involved in redistricting, and the former governor admitted that they basically broke the law and redrew the districts improperly to benefit people for political purposes.”

The plaintiffs in Benisek are making a novel First Amendment argument, asking the justices to find that using past voting data to sort people into districts their side is unlikely to win penalizes them for participation in the political process. It’s a different argument than the one in Gill v. Whitford, a Wisconsin race that relies largely on evidence of overwhelming partisan intent and a toolbox of new social-science methods to make an equal protection claim under the 14th Amendment.

“If a court were to find that a State did impose burdens and restrictions on groups or persons by reasons of their views,” Kennedy wrote in the 2004 case Vieth v, Jubilerer, “there would likely be a First Amendment violation, unless the State shows some compelling interest.”

Read the emails, draft maps and depositions of the Maryland Democrats and their consultants responsible for these districts, however, and it becomes clear that their compelling interest was partisan: Democrats held six of the state’s eight congressional seats, and former Gov. Martin O’Malley and others were determined to press the advantage.

“Everyone was aware,” O’Malley admitted in his deposition, “that I would be drawing those districts in a way that was more advantageous to our party, and that’s what I did.” The former governor said his clear intent was to create a new Maryland sixth district “where the people would be more likely to elect a Democrat than a Republican, yes.”

Hogan can quote from O’Malley’s deposition on demand. It makes him irate. “What if the goal was drawing districts so people get free and fair elections and a competitive two-party system? Not to say how many people can we disenfranchise. Or how many choices can we take away.”

Maryland’s congressional Democrats brought in a data-targeting firm named NCEC to execute the plan. They kept all details to a handshake: No contracts, no agendas, no meeting notes. Depositions tell the behind-the-scenes story: First they considered an 8-0 map that would elect no Republicans at all. That, however, spooked incumbent officeholders, who wanted to gain seats for their own party, sure, but not by risking the safety of their own.

So NCEC consultant Eric Hawkins began drafting between 10 and 20 different versions of a 7-1 map. Hawkins, in his own deposition, concedes that one of his specific goals was “to see if there was a possibility for another Democratic district.”

His secret sauce was NCEC’s proprietary partisan voting index created, in part, by examining voter registration and turnout data, and weighting past elections to determine how the residents – all the way down to an individual census block -- would vote in future congressional races.

Then the firm got to work creating a new sixth district, one with a "Democratic Performance Index" just north of 50 percent. They used two techniques: “Packing” as many of the state’s Republicans as they could into one district, the first, and then “cracking” the others by sprinkling them thinly across as many others as possible.

That’s the essence of the First Amendment claim: The partisan data used by Democrats to lock in the sixth district, and a 7-1 map, penalized Republicans for their political opinions, burdened their representational rights, and made it nearly impossible for them to elect a member of their own choosing.

NCEC worked surgically, yet on a massive scale. Prior to Election Day 2010, the sixth was home to 208,024 registered Republicans and 159,715 Democrats. By Election Day 2012, it included 192,820 registered Democrats and just 145,620 Republicans.  Rep. Roscoe Bartlett, the 10-term Republican incumbent in a district turned inside-out, couldn’t come close to surviving that. He lost his re-election bid to John Delaney, a billionaire Democrat making his political debut, by 21 points.

You see the Democrats choosing their own voters in email exchanges with the mapmakers. When a draft map arrived in the personal email of Jason Gleason, a top aide to Rep. John Sarbanes, he responded, “I think my boss’s reaction will be that he gave up all of Annapolis and will be picking up 200,000 new people all in the name of helping the 1st. No one else can claim a similar sacrifice and he can’t pick up new tough areas in (Anne Arundel County) as well.”

The Democrats tried to spin the new sixth by claiming its compelling interest was representing the growing “I-270 corridor” of commuters who live in Frederick County but work in Washington, D.C. That fig leaf fell away behind closed doors. Hawkins, asked if he considered I-270 as a community of interest when drawing the district, admitted that he did not. Maryland’s speaker of the House conceded, “It never crossed my mind.” Gleason emailed a colleague that the I-270 charade was “painful to watch.”

And the Democratic talking points used to sell the plan to state legislators made clear it would yield a seventh seat by “targeting Roscoe Bartlett. In the face of Republican gains in redistricting in other states around the nation, we have a serious obligation to create this opportunity.”

Hogan says redistricting ought to be used as an opportunity to make the political system work better. He asked a former federal judge, a Democrat and an African-American, to chair a commission aimed at developing a nonpartisan process. State Democrats won’t bring the proposals to the floor. “They keep hiding it in a drawer and just pretending like it doesn’t exist.”

Democrats might come around on a commission, Hogan says, if and only if he wins re-election this year and they realize he’ll control the process in 2021. “They might be ready to move along and take it out of my hands,” he says.

Hogan is likely a shoo-in for re-election in Maryland, blue wave or not. He is one of the two most popular governors in America, along with Charlie Baker of Massachusetts. They are both Republicans leading blue states, and Hogan says they can get things done because they need to actually listen and compromise.

“There’s no question in my mind that partisan redistricting is a major reason for the partisan divide in America,” Hogan tells me. “Only the most partisan liberal Democrat or the most partisan right-wing Republican can get elected. They go to Washington or state capitals with no need to reach people on the other side, moderate their positions – or even consider someone else’s opinion.

“Charlie Baker, me in Maryland, Steve Bullock – a Democrat in Montana – we actually had to appeal to real people, people in the middle, even people of a different party, or we would not be elected and we couldn’t possibly get anything done."

Hogan has been pushing other Republican governors to join the fight for fair maps. Progress has been slow. He’s critical of GOP lawmakers in Pennsylvania who have battled all the way to the U.S. Supreme Court to defend unconstitutionally gerrymandered maps, and are now looking to impeach the state Supreme Court justices who ordered them replaced. The battle against gerrymandering, he says, “is about stopping such irresponsible partisanship because it’s not good for the states or for the country.”

But efforts to make redistricting reform bipartisan, he suggests, aren’t helped by the Democrats’ “hypocritical” efforts to fundraise and politicize around gerrymandering. National Democrats, he says, “won’t say a peep about the worst one in the country, which is Maryland, because it happens to be to their advantage.” They should. The Democrats’ 7-1 edge in Maryland is as undemocratically gained as the GOP’s 9-5 edge in Michigan. It would be the ultimate redistricting irony if this singular 2011 Democratic Maryland gerrymander convinces the U.S. Supreme Court to rein in this anti-democratic practice once and for all.