While the reactors are now in theory stabilized, the work to understand and contain the damage continues 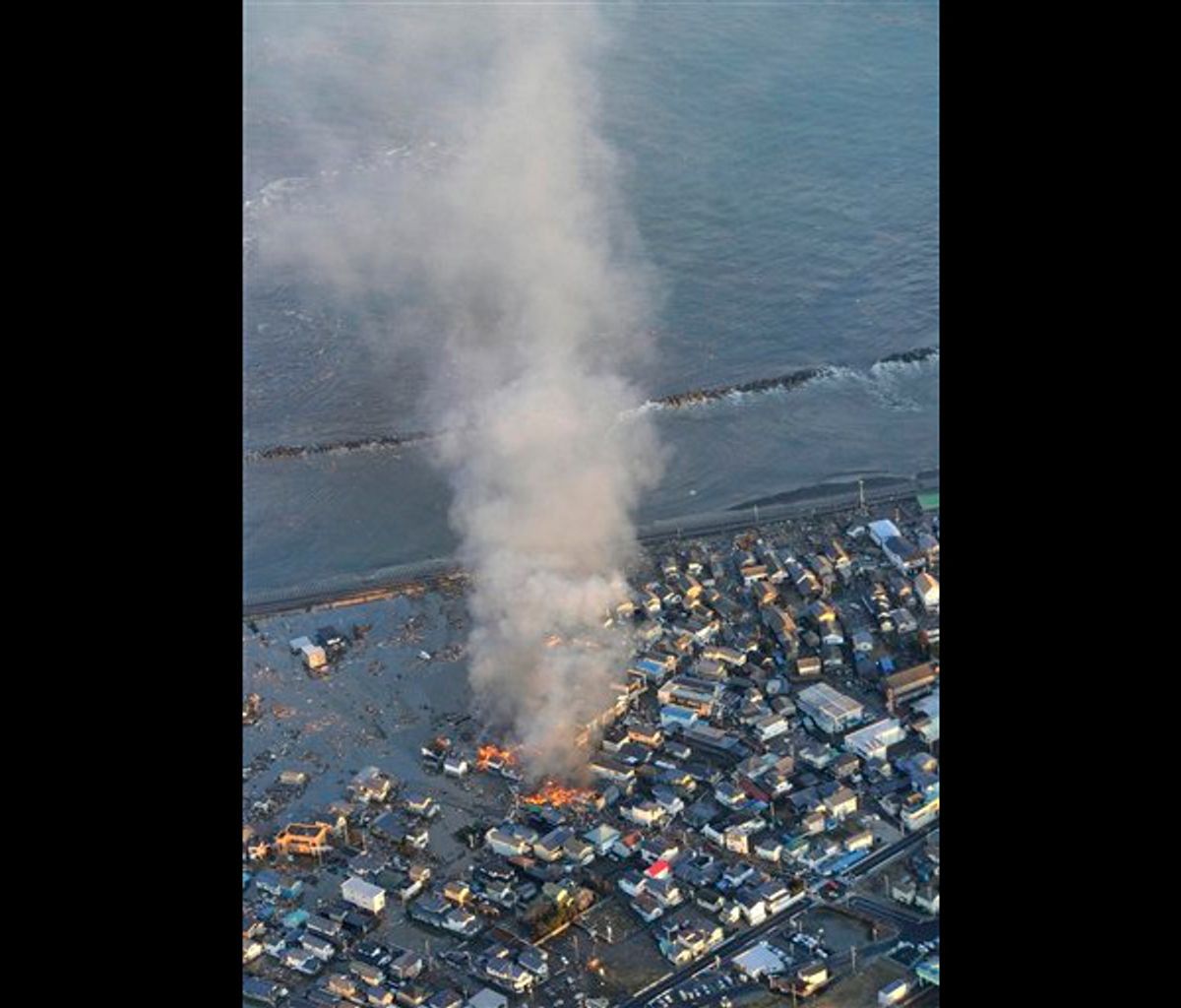 Fire smokes billow from residences as a coastal area is flooded by waters after a tsunami in Iwaki, Fukushima prefecture (state), Japan, Friday, March 11, 2011. (AP/Kyodo News)
--

On March 11, 2011, a nuclear disaster struck Japan. The 9.0 magnitude Tohoku earthquake triggered a 15-meter tidal wave, which hit the Fukushima Daiichi Nuclear Power Plant approximately 45 minutes later. The plant’s power was knocked out and the backup generators crippled. After the emergency batteries were exhausted, three of the plant’s six reactors soon overheated, and at least two of the cores melted down, releasing immense amounts of radiation. While the reactors are now in theory stabilized, the work to understand and contain the damage continues.

In the seven years that have elapsed since the disaster, much has been written and said about its causes. Yet expert reports have paid little attention to the extensive testimony of Masao Yoshida, who was plant manager at the time and passed away in 2013.

One can only wonder about the decisions Yoshida had to make between March 11 and 15, 2011, to avoid the worst. And his gripping account calls into question some of the keystone principles of nuclear safety.

A ‘made in Japan’ disaster?

The international community and the Japanese themselves quickly characterized the disaster as one that was “made in Japan”, meaning it was enabled by two circumstances specific to Japan: the country’s exposure to environmental hazards (earthquakes and tsunamis) and its cultural acceptance of collusion — real or imaginary — between corporations and government.

Management of the accident, both by its operator, the Tepco Group, and the Japanese government, has been condemned as ineffectual. Serious failings were attributed to Tepco, which was unable to prevent a nuclear meltdown and subsequent explosions. A rare bright point was the heroism of those working on the ground, who risked their own lives to avert an even greater disaster.

Calling Fukushima a “made in Japan” disaster focuses attention on the failures of a socio-technical system apparently disconnected from industry good practices and the norms of the International Atomic Energy Agency (IAEA). Moreover, its extraordinary scale allows it to be filed in the same historic category as another “aberrant” accident, Chernobyl. The latter was attributed to gross Soviet negligence, implicitly reinforcing a utopian vision of a safe and reliable nuclear industry. But do the nature of the Fukushima disaster and the specificity of its causes really make it an exception?

There have been a wide range of official inquiries. In Japan, reports were issued by both a governmental investigation and a parliamentary commission. Investigations were also conducted by the International Atomic Energy Agency (IAEA), the American Nuclear Regulatory Commission (NRC), and the Nuclear Energy Agency of the OECD.

These analyses chiefly focused on the impact of the earthquake and subsequent tsunami on the nuclear power plant, the way the crisis was managed by the operator and the authorities, and on the cooperation between those onsite (emergency services) and offsite (Tepco staff). Hundreds of thousands of pages of reports have been published as a result. Ultimately, authorities unanimously concluded that upholding IAEA norms alone guarantees nuclear safety.

But the majority of the thousand-plus hearings given by the people involved have remained confidential. This is troubling: Why would a democratic society allow hearings given to a parliamentary commission to remain secret?

During the Japanese government’s investigation, Fukushima Daiichi plant manager Masao Yoshida was interviewed for more than 28 hours, over 13 sessions. His testimony was only made public in September 2014 after critical reporting by Japanese media. Printed in Japanese on A4 paper, it filled more than 400 pages.

Shedding new light on the story

The Risk and Crisis Research Centre of the Mines ParisTech engineering school translated Yoshida’s testimony into French, the first complete version in a language other than Japanese. (A partial English translation exists, made available by the Japanese daily Asahi Shimbun, but it proved to be inaccurate on several crucial points, and is highly controversial.)

Given that France generates 76% of its electricity with nuclear power, the task of a complete translation should have been undertaken by a nuclear-sector operator. None volunteered, however, no doubt asserting that all had already been said and settled. The Fukushima investigators all followed a pre-set formula, apparently designed solely to confirm hypotheses that would put events down to purely technical causes. Yet Yoshida responded to the investigators’ questions from an entirely different point of view, attributing his decisions and actions to the brutal struggle between men (himself and his staff) and technology or, more precisely, the machines (the reactors) that had suddenly gone out of control.

The brutal reality of the situation in March 2011 was that it was no longer a question of managing a crisis, applying established procedures or rolling out plan A or plan B. Day after agonising day, the Fukushima Daiichi power plant was an island, plunged into darkness, without electricity or emergency diesel generators, and almost completely devoid of resources.

Largely left to their own devices, Yoshida and the plant’s staff risked their lives at every moment. Wearing stiflingly hot protective wear and buffeted by aftershocks, they searched for slightest sound or visual clue in the absence of measurement data. Groping around the labyrinth of the ruined plant, they sought, more or less with success, to protect themselves from radioactive contamination in order to continue their work.

During the hearings, Yoshida confided his fears, doubts and beliefs. He lauded the commitment of his colleagues inside the plant, even as he deplored the absence or incompetence of those outside — Tepco headquarters, the government, the regulatory authority, and so on.

The emotional intensity of his account is both striking and moving. It shatters the all-too-bureaucratic certitudes that underestimate the complexities of situations, to the point of ignoring our humanity: the workers were facing the possibility of their own deaths and, above all, the deaths of their colleagues, their families and everything dear to them.

Almost miraculously, after four days of desperate efforts, the worst — the explosion of the Daiichi reactors, which could have set off those at the close-by Daini and Onagawa plants as well — was narrowly avoided. Yet we have learnt almost nothing from this catastrophe, and the much larger one that was averted.

Of course, re-examining safety standards is important, as are “hard core” safety systems (a kind of fortified line of defence against external onslaughts) and the costly installation of diverse backup power generators. Such measures certainly increase safety margins, but what about the bigger picture?

The creation of “special nuclear forces”, such as France’s nuclear rapid action force (FARN), is a perfect example of such a mind-set. They are on-call to restore installations in accordance with regulations on radiation exposure. But what will such teams do if levels of radioactivity are above those set out in the legislation? Could we count on their commitment, as Japan did for that of Masao Yoshida and his staff, at once heroes and victims, sacrificed willingly or under orders, in order to prevent a nuclear apocalypse?

Translated from the French by Alice Heathwood for Fast for Word and Leighton Walter Kille.