With John Bolton joining Team Trump, what madness lies ahead?

Expect a foreign policy purge, ripping up the Iran deal and high tension with China. Then there's the bad stuff 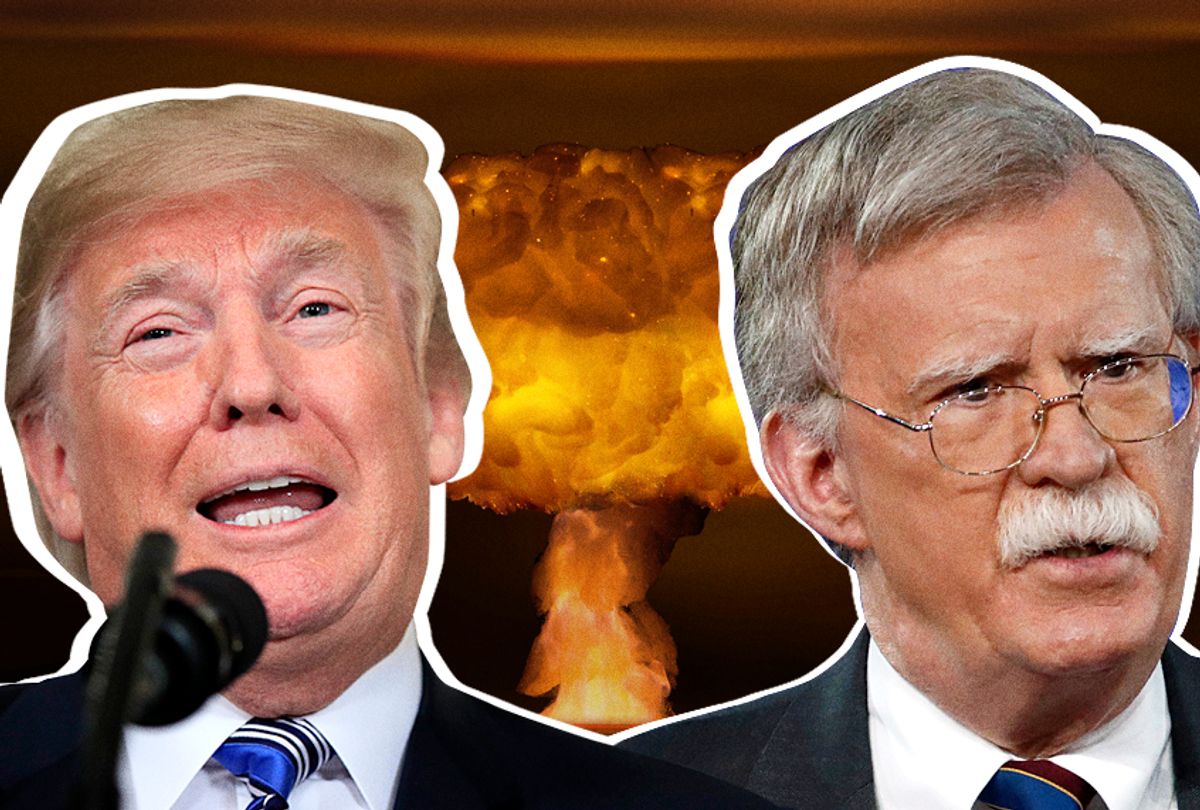 All the news about Stormy Daniels and the big gun safety marches over the weekend has put what may be the most dismaying political story of the past few months, the hiring of John Bolton as national security adviser, on the back burner. But the world will not wait, so it's worth taking a look at what this means now that the dust has settled a bit.

There have been conflicting reports about how Bolton plans to manage the National Security Council. Jonathan Swan at Axios reports that Bolton plans to play the traditional "honest broker" role along the lines of Brent Scowcroft, who served in the position under George H.W. Bush. But according to The Washington Post’s Greg Jaffe, Bolton considers himself more of an imperious Henry Kissinger type. Regardless of his preferred celebrated role model, the word is that he plans a massive shakeup of the council. Foreign Policy reported it this way:

Those targeted for removal include officials believed to have been disloyal to President Donald Trump, those who have leaked about the president to the media, his predecessor’s team, and those who came in under Obama. “Bolton can and will clean house,” one former White House official said.

Another source said, “He is going to remove almost all the political [appointees] McMaster brought in.” A second former White House official offered a blunt assessment of former Obama officials currently detailed or appointed to the NSC: “Everyone who was there during Obama years should start packing their shit.”

The people who were there during "the Obama years" are not political appointees. They are career government employees. But as we've seen with the Department of Justice and the FBI, anyone who hasn't pledged personal fealty to President Trump is suspect and must be purged.

Let's hope Bolton has better luck staffing the National Security Council with experienced professionals than his boss is having trying to find competent lawyers. More likely he will have to troll the right-wing fever swamps for fellow travelers, which isn't exactly reassuring.

It's impossible to believe that someone with Bolton's extremist ideology and strong personality will play the "honest broker" role the position has traditionally demanded. Unless he has changed since his days in the George W. Bush-era State Department as the undersecretary for arms control in the run-up to the Iraq war, and later as the U.N. ambassador, he will be belligerent, overbearing and dictatorial.

Considering that the president has shown he is incapable of learning anything new about foreign policy and national security that he didn't glean from "watching the shows" over the years, Bolton stands to be an extremely powerful adviser. It's not as if there will be any pushback from the usual quarter: the State Department. It has been gutted, and incoming secretary Mike Pompeo is likely to remain Trump's favorite toady. As long as Bolton can keep the president happy, he should have a free hand from State.

David E. Sanger and Gardiner Harris of The New York Times reported that White House Chief of Staff John Kelly and Defense Secretary Jim Mattis are both unhappy with the hire, with Mattis even saying he's not sure he can work with Bolton. The sad fact is that "the two generals celebrated by President Trump for their reputations for toughness are now considered the moderates — and at risk of falling out of favor," which seems likely.

Bolton will almost certainly back the president's desire to tear up the Iran deal. (What Trump wants in its place has never been clear, other than some vague demand that it be more "fair" to America.) Bolton, however, is very clear about what needs to be done: bombing and regime change. Trump, motivated by nothing more than the impulse to do the opposite of previous presidents, especially the hated Barack Obama, can undoubtedly be convinced that accomplishing such a thing would be as easy as he thinks winning a trade war would be.

During the 2016 campaign, Trump often talked about how he wouldn't stand for China building any islands in the South China Sea, implying that he would take military action to stop it. (It's an obscure issue to most Americans, but a hot-button topic in Asia.) Bolton agrees with that too. Sanger and Harris report that Bolton wants to abandon the framework that has undergirded the relationship between the two countries since the 1970s:

In 2016, Mr. Bolton wrote that confronting China “may involve modifying or even jettisoning the ambiguous ‘One China’ mantra, along with even more far-reaching initiatives to counter Beijing’s rapidly accelerating political and military aggressiveness in the South and East China Seas.”

Then there is North Korea, where Bolton apparently believes talks are necessary -- if only to prove they won't work and to lay the groundwork for preventive war. He was successful in sabotaging diplomacy back in 2001 when he helped convince President Bush to abandon diplomacy and "get tough" when the nonproliferation agreement started to fray. That's worked out really well for us: North Korea is now a nuclear power.

Trump's impulsive decision to accept the standing North Korean invitation to meet as equals on the world stage in a matter of weeks may not end up happening at all. Bolton won't even have a staff to work with by then and no time to plan out a delicate negotiation. Whether Trump meets Kim Jong-un anyway and blunders in some epic fashion, or they cancel the meeting and Kim is insulted and humiliated, it's hard to see how this isn't going to be a disaster. Indeed, John Bolton is almost certain to make sure that it is.

The superhawks are in charge now. And yes, despite Trump's incoherent gibberish about Iraq during the campaign and his uniquely squishy approach to Russia, he is one as well, even if he doesn't know it. This is a man, after all, who has proclaimed that he "loves" torture and celebrated apocryphal tales of mass executions with bullets dipped in pig's blood. Our best hope at this point is that other countries see the danger and tread very carefully -- and that the Trump administration is simply too chaotic and dysfunctional at this point, even with Bolton on the team, to carry out any of these policies.