It's very easy to get lost in the jungle of bad judgment, mendacity and mayhem in the Trump White House 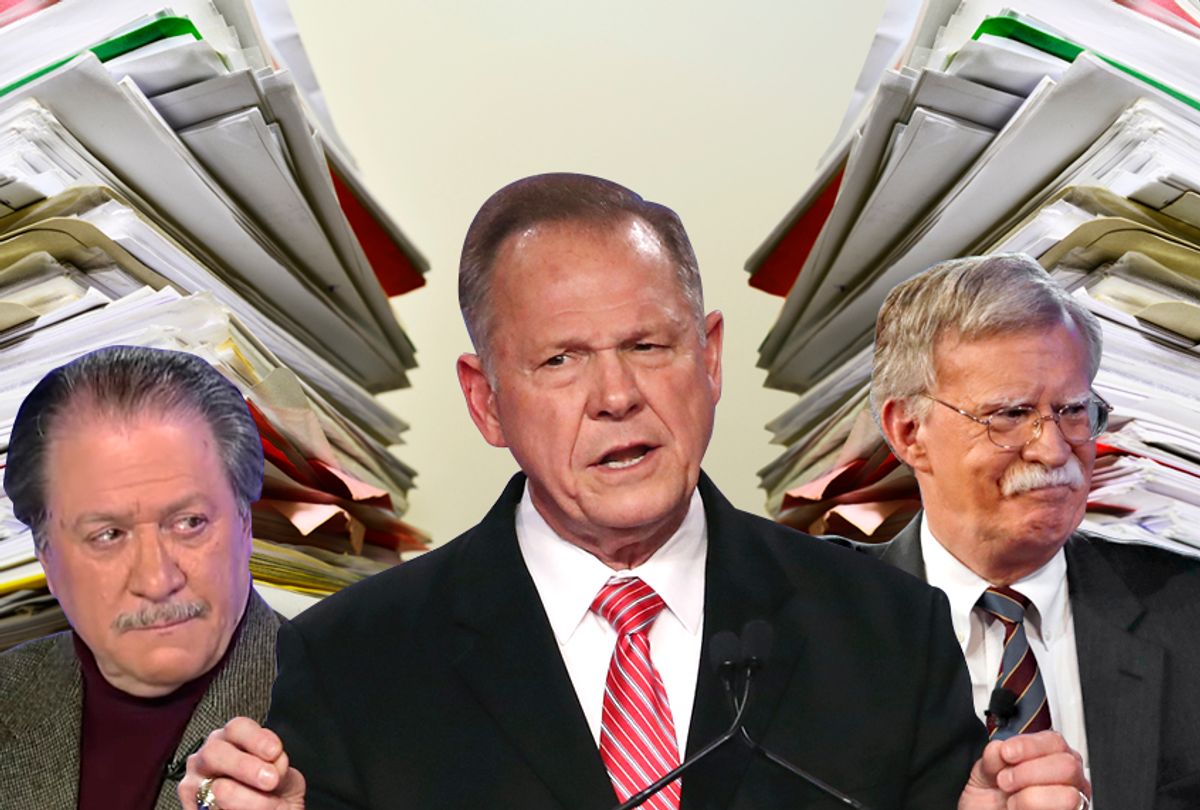 I have accumulated three stacks of notebooks sitting to the left of my keyboard on my desk that I’ve filled with scribbled notes as I’ve tried to stay abreast of the criminality, madness, bad taste, venality, sexual peccadillos and danger emanating from the Trump White House, and they’re not helping at all.

It’s a rabble, really; an assortment of facts and impressions. A yellow legal pad that dates back to the 2016 election topped with khaki colored reporters’ notebooks, and couple of little square “memobook” things I picked up down in Washington, and a pile of loose scraps of paper and old clippings from the Times and peoples’ business cards and god-only-knows what else.

Just yesterday I was flipping madly looking for something I had jotted down recently . . . what was it? There’s a page . . .

Every day, something that’s never happened before . . . they’re not asking questions about nothing . . . overseas contingency account

And still another page — Arkady Dvorkovich

Was it Kushner and the Emeratis and that guy the FBI picked up at Dulles and searched and seized all of his personal electronics and then marched over to a grand jury in Washington? What was his name? George Nader! What the hell was that about? Oh yeah, I remember now. Something about setting up that meeting in the Seychelles with Erik Prince and the Crown Prince of the UAE. Or was it the Russian banker who runs the investment fund for Putin? I’ve got it! The half-billion that Kushner’s real estate company received in loans from the two bankers he met with in his White House office! He sat down with the president of Citigroup and Apollo Global Management LLC, and presto! One of them loans Kushner Companies! 184 million, and the other okays a loan for $325 million. Turns out the Office of Government Ethics has Kushner under investigation, trying to figure out if Kushner violated any federal laws or ethics regulations, you know, when he met with big-time New York money guys in the White House who then suddenly decided to lend a half billion dollars to his nearly bankrupt family business.

Or was it Hope Hicks and the thing about her meeting with Trump on Air Force One trying to generate some story that would explain the meeting at Trump Tower between Don Jr., Kushner, Paul Manafort and the four Russians with links to Kremlin intelligence?

What the hell was that about? There was a guy, Mark Corallo, who was something or another with Trump . . .  here it is! He was a spokesman for the “Trump legal team,” and he was on the phone to Trump and Hope Hicks when they were on Air Force One, and he was helping them come up with the bullshit line they put out that Don Jr. and the rest of them were having a meeting with the Russians about “adoption,” because, you know, right in the middle of campaigns for the presidency, the representatives of most candidates for president are sitting down with Russians talking about “adoption.” Or maybe he was against them putting out the “adoption” line.

But how is it that Corallo’s name is back in front of us, anyway? Oh, yeah. Turns out he’s a client of Fox News Conspiratorialist-in-Chief Joe DiGenova, the lawyer Trump was thinking about putting on his legal team, but now that can’t happen because DiGenova has a conflict representing Corallo, who is cooperating with Special Counsel Robert Mueller and might turn out to be a witness against Trump because he heard Hope Hicks say Don Jr.’s emails with the Russians “will never get out.”

Let me flip through another notebook here for a minute . . . Rex Tillerson! Was it him I was looking for? Rex, who just got fired as Secretary of State because Trump didn’t like him anymore. Or was it because he called Trump a “fucking Moron” last summer? Or was it because he just said something about the Russians trying to kill the guy in Great Britain with the nerve gas, and Trump didn’t want any of his people denouncing Russian nerve gas? Or maybe it was because Trump decided to shake up his “national security team” and threw out Tillerson along with his national security adviser General McMaster, because McMaster gave briefings that were too long and boring, and he wanted another guy in there who was more “fun,” like John Bolton, who wants to bomb Iran to keep them from developing nuclear weapons, and North Korea, because they already have them?

Wow! Look! I just found my notes on Rob Porter, and what do you know but, he’s baaaaack! You remember Rob, don’t you? He was another one of Trump’s Golden Boys, the “Staff Secretary” who was apparently in charge of all the paperwork that crossed Trump’s desk. Not the paperwork that Trump actually read, mind you, but the paperwork that was destined for Trump’s desk to be signed, or passed off to another factotum, or whatever they do with Trump paperwork.

Porter was in his important White House position, working directly under White House Chief of Staff John Kelly, despite the fact that he didn’t have a proper Top Secret security clearance. And why was that? Well, I’ve got it right here in my notes: he failed the FBI security clearance procedure because he had been involved in domestic violence with both of his ex-wives. One of them he beat up and gave a black eye, and the other he man-handled and pushed around to the point that she had to get an emergency protective order  from a court against him. All of that was fine in the Trump White House until it hit the papers, and then Trump had to let him go. But now the New York Times tells us that Trump has been talking to Porter on the phone frequently in recent days, consulting the Harvard graduate and Oxford Scholar on such weighty issues as which countries we should give a waiver from the recent tariffs he imposed on steel and aluminum. Because, you know, former wife beaters are up on stuff like international trade and tariffs and stuff like that.

I had another bunch of notes somewhere . . . or here they are! . . . Gary Lantrip and Bert Davi, the two goofballs down in Alabama who tried to pay $10,000 to the attorney of one of Roy Moore’s accusers to get him to denounce his client? Did you see that story? It wouldn’t surprise me if you didn’t, because it kind of blew by in the dust of all the other crap that we’ve been hit by recently.

Let’s see  . . . the two guys in Alabama . . . they tried to get the lawyer for Leigh Corfman to put out a statement before the election for Senate last winter saying he didn’t believe his own client’s story that when she was 14 year old, and Roy Moore was 32, he got her in a room and removed her clothing and sexually assaulted her. The story was kind of a classic of the genre for Alabama, the state where three of its last six governors have been convicted of crimes and removed from office. Roy Moore, you’ll recall, was the “family values” Republican candidate for the Senate who had been twice elected Chief Justice of the Alabama Supreme Court and twice removed for refusing to follow federal court orders overturning decisions he had made that were declared unconstitutional. Moore was accused by nine women of either sexually abusing them when they were minors or “pursuing” them for “dates” when they were teenagers

Trump, of course, ignored the allegations of abuse of minors surrounding Moore and endorsed his candidacy and appeared for him at a rally in Alabama during the campaign. What we didn’t know was that behind the scenes, two of Moore’s supporters were trying to buy-off Leigh Corfman’s lawyer. They offered him $10,000 and introductions to Steve Bannon, a big supporter of Moore who was then running Breitbart News. Bert Davi was a former Hell’s Angel who had done time in prison for auto theft, forgery felonious possession of a firearm by a felon, and dealing methamphetamine. Both Davi and Lantrip attended a big fundraiser for Moore in Washington given by Rand Paul at a Capital Hill townhouse and attended by Steve Bannon, some other Republican Senators and major Republican Party donors, because, you know, in Donald Trump’s Washington, it’s a regular thing to raise money for child abusers supported by former Hell’s Angels who have done serious time for drugs, stealing cars, kiting checks and guns.

You can’t make this stuff up. You also can’t keep track of it, which is why I keep filling notebook after notebook trying to get straight in my mind which Trump-involved scandal we’re in the middle of at the moment, which one we just left. But you know what? You never really leave the scandals, do you? Just when you think one of them is finished and all that’s left to do is for Mueller and his team to put it through the legal grinder, it’s back. They never go away: Kushner, Flynn, Manafort, Papadopoulos, Porter, Sessions, Page — you might think you’re finished hearing from them, but you’re not. They’ll get indicted, or they’ll make deals, or something brand new they tried to pull will pop up. Trump is the gift that keeps on giving, especially for the companies that make reporters’ notebooks. Buy some stock in a paper company, or better still, look into Portage, the Ohio company that makes my notebooks. It’ll go up. I’m buying so many of the damn things, I can guarantee it.