Sympathy for the devil: White privilege and the Austin bomber

Mark Conditt's bombing campaign was one more example of an upsurge of domestic terrorism. But no one says that 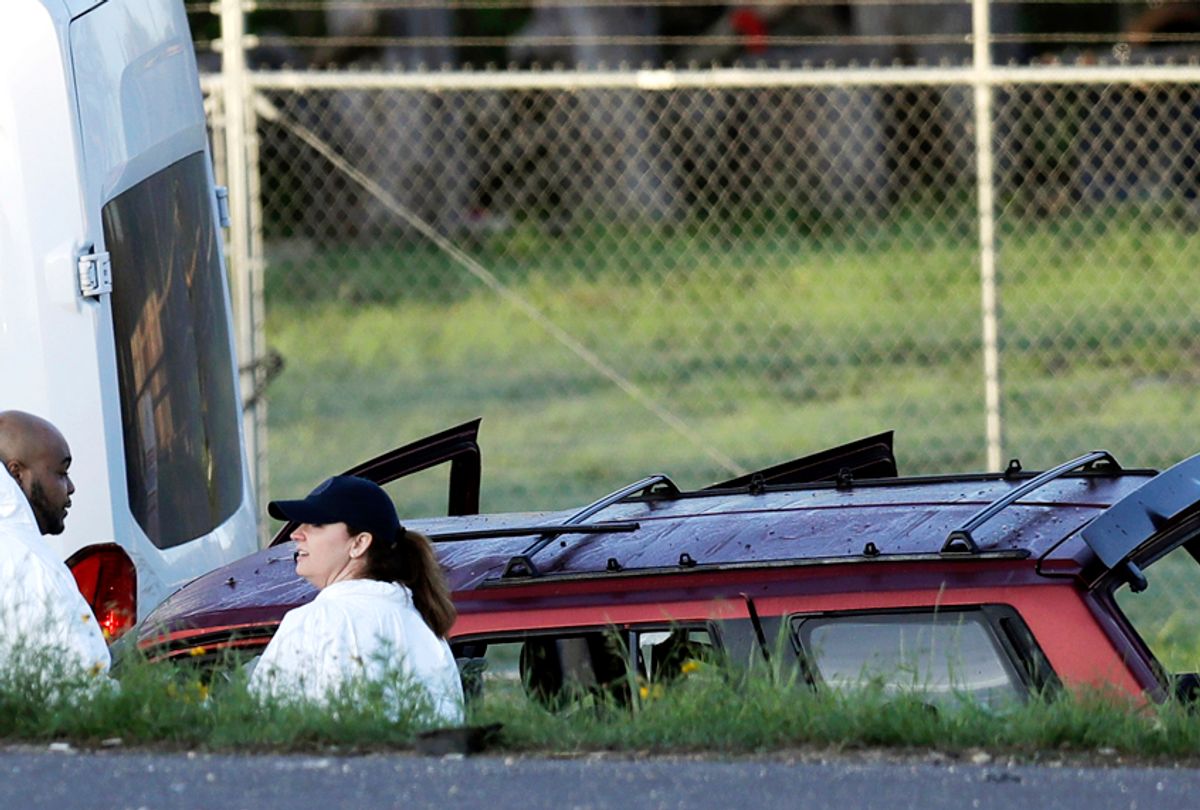 Officials investigate the scene where Mark Conditt, the suspect in a series of bombing attacks in Austin, blew himself up as authorities closed in, March 21, 2018. (AP/Eric Gay)
--

Whiteness distorts reality. Through its almost magical glare it can transform mass murders, killers and terrorists into "confused" "lone wolves" who were "nice and quiet."

But for all of its power, whiteness cannot exist independent of blackness. The former transforms the latter into something monstrous and dangerous, where black people are preternaturally dangerous and violent, causing police to be "in fear of their lives" and white citizens to kill with impunity as they "stand their ground." Negrophobia is a type of madness; in American society such a pathology is treated as normal.

The hypocrisy is obvious. As James Baldwin once observed, "To be a Negro in this country and to be relatively conscious is to be in a rage almost all the time."

The public script is dog-eared, yellowed and tired. It remains no less true.

We can recite it by heart.

Mark Anthony Conditt visited a reign of terror across Austin, Texas, as he used bombs to kill two people and injure four others. Conditt's horrific acts were particularly terrifying for Austin's African-American community as he targeted black people for murder. (Deliberately or otherwise.) Cornered by the police, Conditt blew himself up in his car, an act akin to that of a suicide bomber.

Conditt was described not as a monster or a possible white supremacist and hatemonger but as a "troubled" young man with "challenges in his personal life" and as a "'nerdy' young man who came from a 'tight-knit, godly family.'" If he had been Muslim, black or brown he would have been labeled as a likely "terrorist" and a remorseless monster. Donald Trump would have condemned him, smeared an entire race or religion and called for a renewed military-style crackdown on crime or terrorism or some other perceived pathology. Instead, the president of the United States remained notably silent about Conditt and the Austin bombings.

There are questions emerging from this case that simply will not be asked. Why didn't Conditt's neighbors call the authorities? What do we know about his upbringing? Who were his friends and family? Where was he "radicalized"? How did he pray? Was religion to blame? What were his political views? Did he hate America?

In the case of Conditt, we do have some answers. As a teenager he practiced weapons and survival skills with a Christian youth military group called Righteous Invasion of Truth (RIOT). He was home-schooled by Christian fundamentalists. He was apparently a conservative who believed homosexuality was abnormal, supported the death penalty and opposed women's reproductive freedom.

What if we flipped the script by extending the same level of human empathy and concern towards Muslim and other nonwhite terrorists that was shown to Mark Conditt by the Austin police and media outlets like The New York Times? What would we learn?

Leading criminologists and psychologists like Adam Lankford have concluded that terrorists -- especially suicide terrorists -- fit a profile of "mental health problems, personal crises, coercion, fear of an approaching enemy, or hidden self-destructive urges." By these criteria and others, Mark Conditt fits the profile of a terrorist. Some would object that he cannot be a terrorist because he does not belong to an organization such as ISIS or because he did not seem to possess a "coherent political ideology."

These objections are imprecise and misplaced.

Mark Conditt did indeed have a coherent political ideology. He was a right-wing Christian fundamentalist who was radicalized by his parents, peers and religion. This is part of a larger American pattern, as David Perry points out in a recent essay at Pacific Standard:

These murders, mostly committed by white American men, reveal patterns, but they're not evidence of some kind of single, secret organization dedicated to committing white-supremacist violence. That tends to puzzle people, because our conception of terrorism is linked to Islam and people of color, but also to cell-based groups like al-Qaeda: When we think of terrorism, we look for secret leaders sending out commands and planning operations. That's just not the model in this case, so when these white men kill, the media, elected officials, and law enforcement respond by disavowing connections to terrorism. These disavowals reveal a basic racism surrounding the word "terrorism," although many officials and reporters just want to keep people from panicking.

America is confronted by an upsurge in right-wing violence. This is likely a form of backlash against the presidency of Barack Obama and has clearly been encouraged by the white identity politics and racism of Donald Trump and the Republican Party.

Mark Conditt's bombing campaign is only one example. Since 2014, right-wing terrorists and other members of the so-called "alt-right" have killed and injured at least 100 people. This complements research from the Combating Terrorism Center at West Point, which shows that there have been at least 300 attacks by right-wing domestic terrorists each year in the United States since 2001. Over at least the last 10 years, right-wing domestic terrorism -- most of it committed by white Christian males -- is a greater risk in the United States than is Islamic terrorism.

As David Neiwert and others have documented, this is a cultural problem inflamed by the right-wing news media, opinion leaders and politicians who, through the use of "eliminationist" rhetoric and "stochastic terrorism," encourage violence against nonwhites, Muslims, liberals, progressives and any other group deemed to be the "enemy."

Instead of confronting and prosecuting right-wing domestic terrorists, the Trump administration would rather focus on the bogeyman of "black identity extremists"; "illegal immigrants" who supposedly come to America to kill, torture and rape white women; and of course the much exaggerated threat posed by "radical Islam."

Ultimately, the face of American terrorism is white and male. To state such a plain fact is upsetting to the fragile heart of whiteness. Thus the lie where whiteness must always imagine itself as benign, trustworthy and innocent -- even if it means coddling or normalizing white domestic terrorists like Mark Conditt.