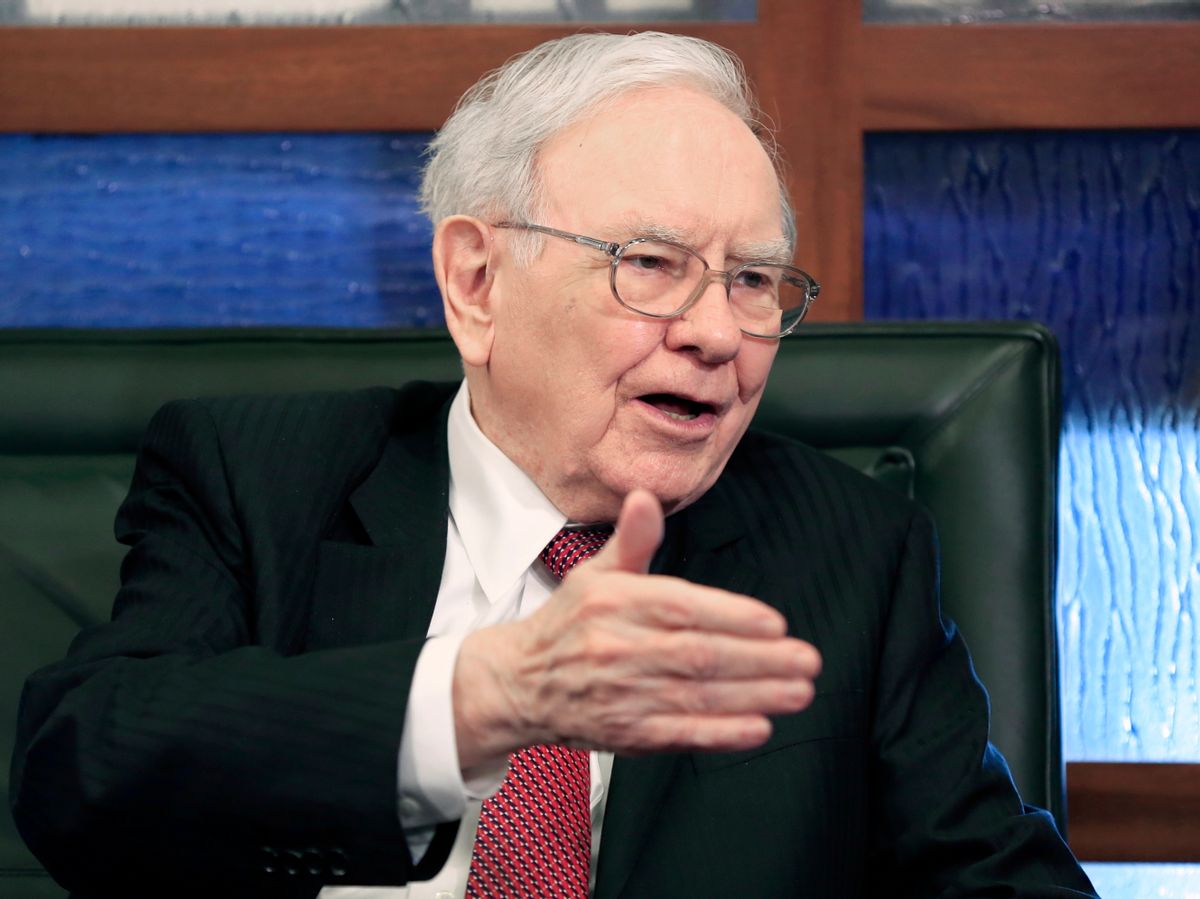 FILE - In this Monday, May 4, 2015, file photo, Berkshire Hathaway Chairman and CEO Warren Buffett speaks during an interview with Liz Claman on the Fox Business Network in Omaha, Neb. Buffett has a high-class problem: cash is piling up at Berkshire Hathaway faster than he can invest it. (AP Photo/Nati Harnik, File) (AP)
--

Warren Buffett, the most successful investor of our time, is a huge fan of low-cost index funds — funds that replicate a market index rather than try to outperform it — as the way for the average investor to succeed in the stock market. “By periodically investing in an index fund … the know-nothing investor can actually outperform most investment professionals,” he wrote in his 1993 letter to shareholders of his Berkshire Hathaway conglomerate. “Paradoxically, when ‘dumb’ money acknowledges its limitations, it ceases to be dumb.”

He returned to the subject in this 2016 letter, writing, “Both large and small investors should stick with low-cost index funds.” And in his newest shareholder letter, Buffett said that one reason he made a widely publicized bet (which he has now won) that a low-cost Vanguard index fund would outperform a group of hedge funds over a 10-year period was “to publicize my conviction that my pick — a virtually cost-free investment in an unmanaged S&P 500 index fund — would, over time, deliver better results than those achieved by most investment professionals, however well regarded and incentivized those ‘helpers’ may be.”

Given Buffett’s praise of index funds — specifically, those with low fees — you’d think that all the employees at Berkshire Hathaway companies would get to practice what the boss preaches by being able to invest their 401(k) money in such funds.

But you’d be wrong.

It turns out that employees of many Berkshire subsidiaries have the same problem — and it’s one that, as we’ll see, also affects millions of Americans outside of Buffett’s companies. To wit, your employer, not you, chooses your 401(k) investment options and your choices may be less than optimal either because your employer doesn’t know any better or because your employer’s interests are different from yours.

You wouldn’t expect to see this problem at a company run by a brilliant investor like Buffett, but it’s there. I’ve looked at the retirement plans of each Berkshire subsidiary whose investment options I could find on file at the Labor Department, which turned out to be about 50 of the 63 subsidiaries listed on Berkshire’s website.

Each offers its own investment options rather than having Buffett or someone else at headquarters pick a package of suitable company-wide investments. That’s not surprising in one sense: Buffett is famously hands-off in how he oversees the companies owned by Berkshire.

But the result is that many of the subsidiaries offer little or nothing in the way of index funds. And even when they do offer such funds, different Berkshire employees can end up paying wildly divergent fees for the same investment, depending on which operation they work for. Those differences can cost — or save — them tens of thousands of dollars over the course of decades.

Consider two examples that I got from a list assembled by Eli Fried, an investment consultant who advises pension and endowment funds and is the person who brought the Berkshire disparities to my attention. Fried told me he was looking at 401(k) investment options offered by the top companies on Fortune’s list of most admired companies and was surprised by what he found at Berkshire.

On the index fund front, there’s a big difference between the S&P 500 index funds that employees of Berkshire-owned NetJets, General Re, GEICO, FlightSafety, Clayton Homes and H.H. Brown Shoe Group can buy, and the one that BoatU.S. employees can buy. BoatU.S. employees pay a fee of 0.62 percent, or $62 a year for a $10,000 investment. That’s more than 15 times the 0.04 percent — $4 a year per $10,000 — that employees of the six other Berkshire companies pay.

There are also some big differences in fees among the actively managed funds that Berkshire companies make available. Employees of Business Wire pay a 0.5 percent ($50 per $10,000 invested) for shares in American Funds’ EuroPacific Growth Fund, while employees of Applied Underwriters, Jordan’s Furniture and MiTek pay 1.14 percent ($114 per $10,000).

As a longtime Berkshire shareholder, a contrarian from birth and someone who’s watched Buffett for more than 40 years, I was intrigued when Fried approached me. And I was shocked at the huge differences among the plans that emerged when I did my own digging.

For example, as of year-end 2016 — the most recent information the Labor Department has on file — Borsheim’s Fine Jewelry offered employees 71 investment options, virtually all of which (other than 10 Vanguard target date retirement funds) consisted of actively managed funds, while Precision Steel Warehouse and Nebraska Furniture Mart offered a relative handful of options, most of which were low-cost index funds. Precision and Nebraska Furniture also offered Berkshire common stock as an investment option, which only a handful of the plans did.

There are plenty of other examples of disparities among the plans, but by now, I think, you get the point. The most successful investor of our age, who advises average investors to buy low-cost index funds (which have become wildly popular at least in part because of his longtime advocacy of them) presides over a company where many employees don’t have a chance to invest as he suggests.

I would love to give you Buffett’s explanation for this — Berkshire is highly decentralized, as I told you, and it’s possible that until recently he might not have known about the big differences among the plans that its subsidiaries offer — but I can’t.

He wouldn’t respond to my detailed request for comment. Nor would Marc Hamburg, Berkshire’s chief financial officer.

The four Berkshire subsidiaries I asked to discuss their 401(k) choices wouldn’t respond, either. The four are BoatU.S., Borsheim’s, See’s Candy and Applied Underwriters.

Why am I taking you through all of this? Three reasons.

First, because when a plainspoken, widely admired investment god like Buffett proves to have feet of clay, I think people should know about it.

Second, because the investment choices offered in 401(k) plans are a big deal. Along with Social Security, they are almost certain to be the major retirement vehicles of the future, given the vast shrinkage of traditional pensions. About 63 million people have access to 401(k) plans. Some 87 percent of the retirement plans that serve them now offer at least one index fund, according to the Plan Sponsor Council of America. But the biggest portion of employees’ retirement investments still consists of actively managed domestic stock funds, according to the PSCA.

Third, because the Berkshire situation typifies the fact that when it comes to 401(k) plans, your employer’s interests may be different from yours.

Take target date funds, the big trend in retirement plans these days. You pick a year in which you’ll be old enough to retire — say 2035 — and buy into a fund that gradually changes over to a more conservative investment mix as the target date nears.

I think that a major reason for these differences and for the differences among Berkshire funds is that the more fees an employee pays for her 401(k) funds, the lower the recordkeeping, administrative, custodial and other costs her employer has to pay. In essence, some employers save money by having their employees pick up more of the tab.

I stumbled on this back in the day, when I was trying to figure out why an index fund that I owned in my personal Vanguard account carried a lower management fee than in my Washington Post Co. 401(k) account. Someone who shall remain nameless explained to me that this was the way of the world — if I paid less, my employer would pay more.

I suspect that if I could get someone at Berkshire or its subsidiaries to talk candidly with me, they’d say this phenomenon explains many if not most of the disparities among the Berkshire plans.

In order to get perspective on all this, I discussed the Berkshire situation with two experts — Ric Edelman of the Edelman Financial Services financial planning firm, and Teresa Ghilarducci, a retirement maven who teaches economics at the New School for Social Research in New York. Neither of them knew about the Berkshire situation until I told them about it. “In today’s marketplace, there’s no longer any excuse for saddling employees with high-cost retirement plans. Employers can offer low-cost investments while keeping their own costs very low,” Edelman told me.

“The practice of pushing the costs onto employees and offering dozens of funds doesn’t meet today’s standards,” Ghilarducci said.

So there you have it. Berkshire’s annual shareholder meeting is on May 5. With luck, someone will ask Buffett the questions about Berkshire’s 401(k) plans that he wouldn’t answer when I posed them. It would sure be interesting to hear what he says.