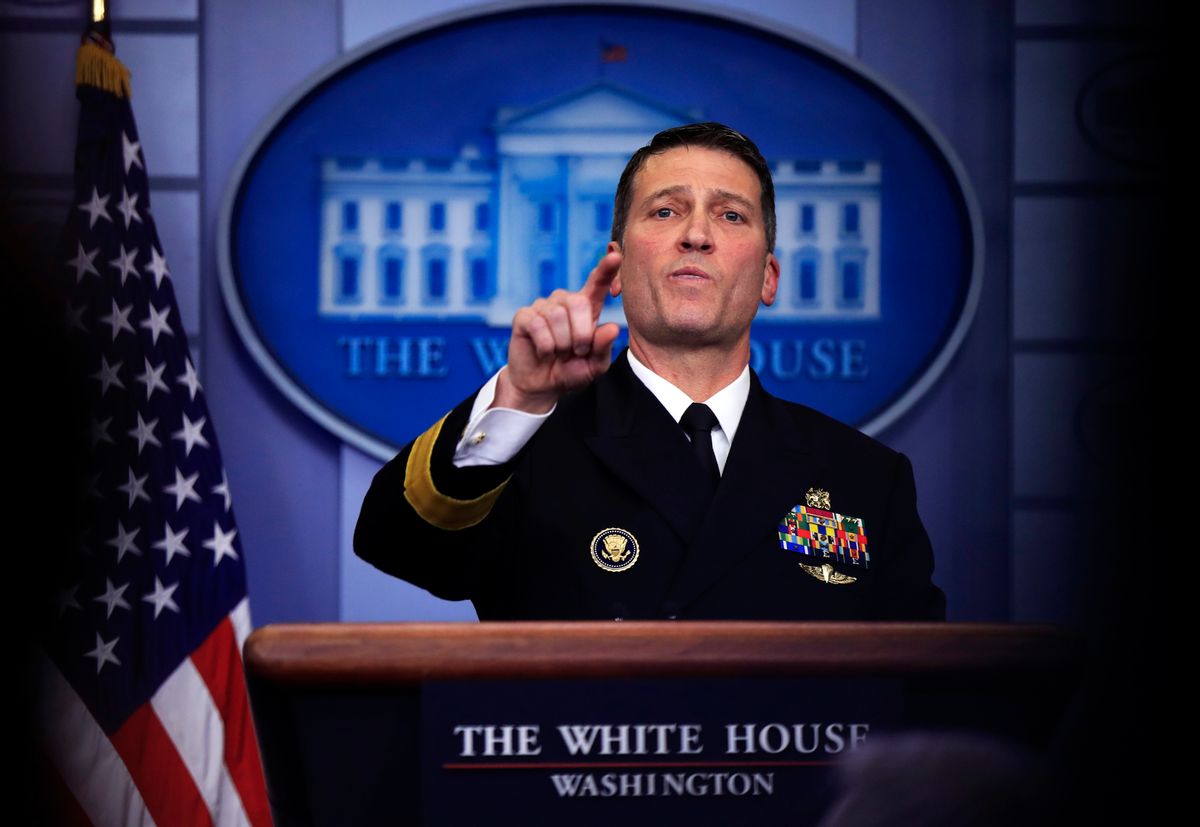 President Donald Trump has chosen White House physician Dr. Ronny Jackson to be the next head of one of America's most complex, expensive and important agencies — the Department of Veterans Affairs.

Jackson is a 50-year-old active-duty rear admiral in the Navy who has worked as a White House physician for Presidents George W. Bush and Barack Obama as well as Donald Trump. Although Jackson's well-respected military background presumably gives him a level of sympathy for veterans, he has no management experience and was widely considered by administration insiders to be an underdog for the position. The frontrunner was Pete Hegseth, a Fox News Channel contributor who had worked as executive director for the political advocacy groups Vets for Freedom and Concerned Veterans for America.

That latter group, colloquially known as the CVA, is sponsored by the notorious conservative billionaires Charles and David Koch and is controversial among veterans groups for its support for privatizing certain VA health care services, according to The Washington Post. Although Jackson is not affiliated with that group, he also has never gone on record as expressing a substantive opinion about whether he believes more health care services should be privatized in the agency. That will undoubtedly be a major issue when his confirmation hearing arrives. The outgoing Secretary of Veterans Affairs David Shulkin even characterized his departure as fueled by his opposition to privatization (which, though partially true, ignores Shulkin's scandal for misusing taxpayer money on personal trips for himself and his wife).

As Shulkin wrote in The New York Times on Wednesday:

It is unclear how Jackson would handle this sensitive issue, which has pitted mainstream veterans groups against conservative ones that want to save money. Yet as Sen. Bernie Sanders, I-Vt., pointed out to the Post, "This whole business is not about David Shulkin. It’s about the influence of the Koch brothers over the Trump administration and their desire to privatize VA."

He added, "If Trump thinks he’s going to bring in some new secretary who will privatize, he’s wrong."

The only certain detail about Jackson is that, despite his complete lack of experience when it comes to managing veterans' issues, he is personally well-liked by Trump — and that seems to be his major selling point for the president himself.

Trump's nickname for Jackson is "The Doc," and the president is reported to enjoy the physician's sense of humor and sharp intelligence. He was also impressed with how Jackson handled himself during a press conference in January, during which he gushed over the president's physical and mental health.

"Some people have just great genes. I told the president that if he had a healthier diet over the last 20 years, he might live to be 200 years old. . . . He has incredibly good genes, and it’s just the way God made him," Jackson told reporters.

He added, "He’s very sharp, and he’s very articulate when he speaks to me, and I’ve never known him to repeat himself around me. I’ve found no reason whatsoever to think the president has any issues whatsoever with his thought process."

Jackson's apparent geniality has not only endeared him to Trump but also helps explain why he is personally well-liked by many Democrats as well as Republicans, according to USA Today. Two of Obama's former advisers, Dan Pfeiffer and Alyssa Mastromonaco, praised Jackson's character and defended him in January after he was harshly criticized for his glowing appraisals of Trump's health.

Yet this may very well be the core problem — that Trump keeps choosing high-ranking officials based on whether he personally likes them rather than whether they are qualified for the job. Last month he incurred controversy for floating the name of his personal pilot, John Dunkin, to head the Federal Aviation Administration. He has also made personal family members into high-ranking officials and advisers — most notably his son-in-law Jared Kushner and daughter Ivanka Trump — and has placed individuals in high-ranking positions based on personal affinity rather than experience, such as Ben Carson at the Department of Housing and Urban Development or Omarosa Manigault as a political aide.

Jackson may be a decent and likable man himself, but the fact that we know so little about his political views is troubling enough given the movement to privatize a health care agency that many veterans depend on as public and thereby affordable. It also speaks to a trend that has existed since Trump was elected, one in which the president treats public service as a reward given to those who are personally loyal to him rather than as a responsibility to be used for the betterment of the people.