In the Trump era, Republicans get even dumber on climate change 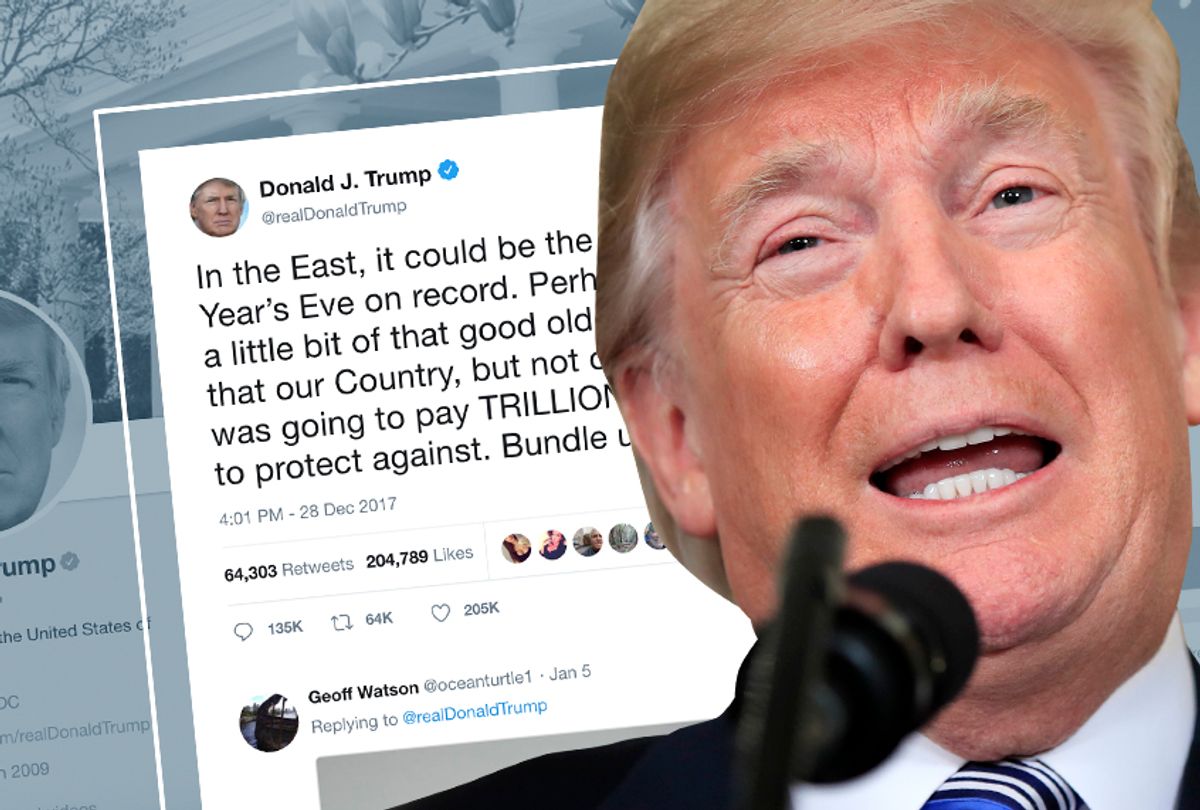 Climate and weather are not the same thing, but good luck convincing the president of the United States of that basic fact. As if his tweets dismissing global warming as a “hoax” manufactured by the Chinese and his decision to pull the U.S. out of the multinational Paris Agreement on climate change weren’t depressing enough, now there is evidence that Donald Trump’s determination to make the Republican Party the “stupid party” has been a wild success.

As Americans have drifted further apart on a wide variety of issues over the past few years, perhaps nothing exemplifies the growing gulf between supporters of the two major parties more than climate change. (Gun control is a similarly divisive issue, especially now.) In the Trump era, Republicans appear to have significantly regressed in their beliefs about climate change -- which is admittedly saying something.

Fewer Republicans say they believe in a scientific consensus on climate change, a year into Trump’s presidency, than said they did shortly after he took office, according to a new Gallup poll. Released this week, Gallup's annual survey on the environment found that Trump has pushed Republicans to be more extreme on issues concerning the environment, specifically climate change.

While more Americans think that climate change will pose a serious threat in their lifetime than at any other time since 1997, according to Gallup, Republicans remain more skeptical than ever.

Only a third of Republicans said they worry about climate change or even acknowledge that it is already happening, down 3 percentage points from the year prior. Just 35 percent of Republicans believed global warming was caused by humans, compared with 40 percent at about this time in 2017, a few months after Trump took office.

In 2017, 53 percent of Republicans agreed that most scientists believe climate change is occurring. That number declined 11 percentage points during Trump’s first year in office to 42 percent in 2018. Just to clarify that: A majority of Republicans now reject not merely the idea that climate change is real, but the idea that most scientists believe it is real. That suggests an imperviousness to fact that goes well beyond unorthodox opinion into outright delusion.

“President Donald Trump, who has called global warming a ‘hoax,’ may have contributed to this widening divide by reversing a number of government actions to address the issue,” Gallup said regarding the data.

In fact, 97 percent of climate scientists believe that global warming is caused by human activities. But according to a new report on Perceptions of Science in America from the American Academy of Arts and Sciences, only 39 percent of U.S. adults trust climate scientists “a lot” to provide full and accurate information about the causes of climate change. Although last year was the second warmest year on record, behind only 2016, nearly 70 percent of Republican respondents told Gallup that the threat of climate change is "exaggerated," an increase from 66 percent last year. Only 4 percent of Democrats shared that view.

Trump has waged a successful war against the scientific consensus on climate change, but as with nearly all his most popular positions, he simply rebranded a belief that was widely held by many conservatives well before his ascendance.

Beginning with the Tea Party, the grassroots movement against the Obama administration that was heavily funded by GOP megadonors with personal investments in the fossil fuel industry, conservative Republicans have long embraced climate-change denialism. In 2013, Pew found that while 61 percent of Republicans who did not align with the Tea Party believed in climate change, 70 percent of Tea Party members did not.

Since then, Republicans have only grown more unified in their denialism. Now more than 59 percent of Republicans in the House, and 73 percent of Republicans in the Senate, doubt humans’ impact on climate change, according to a ThinkProgress analysis. During Trump’s first 100 days, the House and Senate voted against environmental protections 42 times. Trump’s pick to lead the Environmental Protection Agency, Scott Pruitt, has removed numerous references to climate change from EPA documents, and reportedly ordered staffers to cast doubt on the scientific consensus about climate change and mankind’s role in the crisis.

Partisanship soaks into every public discussion in America, and Republicans’ response to their party’s denialism is to be expected in these increasingly polarized times. But the Trump administration's anti-scientific and counter-factual stance on climate also seems to be swaying the opinion of voters not affiliated with the Republican Party. Independent voters have grown more doubtful of scientists’ warnings about climate change over the past year, according to Gallup.

Even as the U.S. spent more money on weather-related disasters in 2017 than in any previous before, as devastating hurricanes battered several southern states and the Caribbean island of Puerto Rico, independents who believe global warming is caused by human activities fell to 62 percent from 70 percent the year before.

Scientists believe that warming temperatures likely contributed to the destructiveness of last year’s storms, and the cost of climate change is only expected to increase. Still, in a strange and notable finding, conservative Republicans become less likely to agree that “there is ‘solid evidence’ of recent global warming due ‘mostly’ to ‘human activity such as burning fossil fuels’” the more educated they are, according to the report from the American Academy of Arts and Sciences.

Trump’s campaign against climate science is working on conservatives and independents, and that is certainly worrying. But there is some good news for climate sanity buried in the latest public opinion surveys. A majority of Republicans in swing states won by Trump in the last election — namely Ohio and Pennsylvania — said they were more likely to support a candidate committed to transitioning away from fossil fuels to renewable energy, according to a poll from Greenberg Quinlan Rosner Research conducted in conjunction with the Sierra Club.

Trump has led the Republican Party to become the only major political party in the developed world to reject the science on climate change, which leaves the door wide open for Democrats to take bold positions to tackle the crisis. As polling shows, moderation simply won't work to win over Republicans who are trapped in denial.