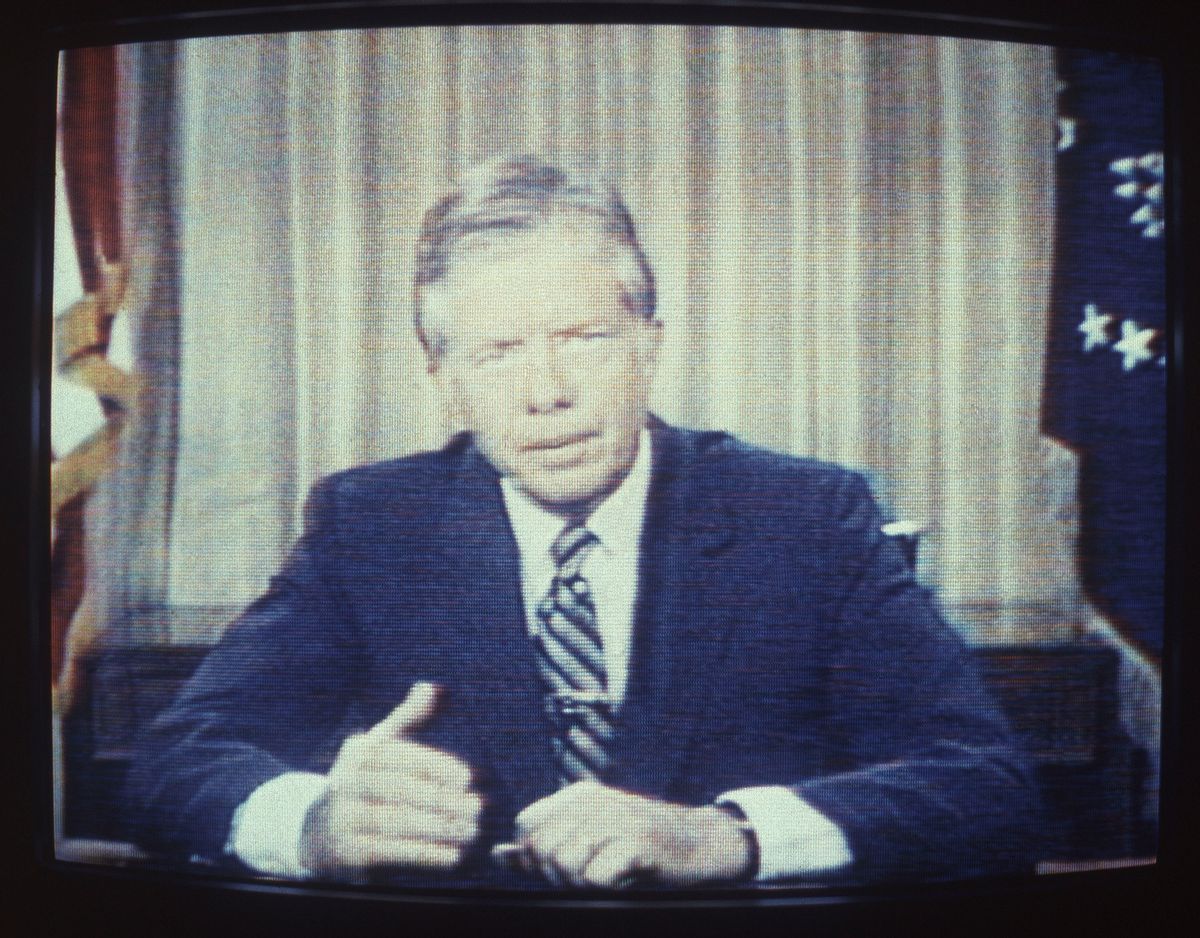 FILE - In this July 15, 1979, file photo, President Jimmy Carter delivers his energy speech, which became known as the "malaise" speech, on television. When Carter felt beset by pessimism amid the energy crisis in 1979, he gave a startling speech warning that a crisis of confidence posed a fundamental threat to U.S. democracy. With a mix of alarm and dismay, President Barack Obama has started musing about the dangers of cynicism in nearly every major public appearance. The cautionary note has showed up in speeches to students and civil rights groups, at Democratic fundraisers, even in his meeting with Pope Francis. (AP Photo/Dale G. Young, File) (AP)
--

On the eve of the Supreme Court hearing its second major gerrymandering case this term — a Democratic power play in Maryland to grab a House seat — new research on Republican extreme gerrymanders in swing states is underscoring that a blue turnout wave in November must be a political tsunami in order to retake the House majority.

“Because of [political district] maps designed to favor Republicans, Democrats would need to win by a nearly unprecedented nationwide margin in 2018 to gain control of the House of Representatives,” the report by the Brennan Center for Justice at New York University Law School said. “To attain a bare majority, Democrats would likely have to win the national popular vote by nearly 11 points. Neither Democrats nor Republicans have won by such an overwhelming margin in decades. Even a strong blue wave would crash against a wall of gerrymandered maps.”

Gerrymandering is the practice of drawing political districts by segregating each major party’s reliable voters so the typical voter turnout favors one side. In 2011, the Republicans, in a plan overseen by a handful of top GOP operatives (including Karl Rove), targeted the mapmaking process in 16 states with more than 190 House seats.

The result is what the country has experienced this decade. In states like Michigan, Wisconsin, Pennsylvania and Ohio, where the presidential vote is statewide and not gerrymandered, we've see very close results — victory margins in the tens of thousands in states where millions vote. But in elections where gerrymandering has parsed the electorate, the U.S. House delegation and legislative results have typically led to GOP supermajorities.

Texas experienced a slightly different version of this partisan segregation. Its population growth has mostly been among non-whites, but its political districts are drawn so elected officials do not represent that Latino surge.

The Brennan Center analysis adds new information on the size of the blue voter turnout wave necessary to win in gerrymandered states. What’s most revealing about the new data is how much larger the turnout wave has to be among Democrats, percentage-wise in the overall popular vote, to pick up additional seats.

The Democrats need to win 23 more seats to retake the House. The analysis summarized what's needed in four states:

• In Michigan, even if Democrats win five seats with 38.38 percent of the statewide vote, they are not projected to compete for a sixth seat until their statewide vote share reaches 54.89 percent, an increase of 16.51 percentage points.

• In North Carolina, even if Democrats win three seats with 29.66 percent of the statewide vote, they are not projected to compete for a fourth seat until their statewide vote share reaches 52.78 percent, an increase of 23.12 percentage points.

• In Ohio, even if Democrats win four seats with around 26.07 percent of the statewide vote, they are not projected to compete for a fifth seat until their statewide vote share reaches 54.71 percent, an increase of 28.64 percentage points.

The Brennan Center noted that while these four states are not the most heavily gerrymandered, they typify the turnout challenges for Democrats this fall. The report notes that this decade’s maps gave the GOP a bigger advantage compared to maps drawn under George W. Bush’s presidency in this century’s first decade.

In 2006’s midterm election, Democrats gained 31 seats when they won the national popular vote in House races by 5.4 percent, the report said. This fall, a similar national popular vote margin would give Democrats only about a dozen new seats. Increasing that vote margin to 10 points would gain 21 seats for the Democrats, which is below the 23 seats needed for a new majority. An 11-point margin would yield 28 seats, but the Democrats have not had such a big midterm victory since 1974, after the resignation of President Richard Nixon. That year’s almost 14-point popular vote margin yielded 49 new Democratic seats.

“To be sure, Democrats might carry some districts they are not projected to win. The March 13, 2018 special election in PA-18 is a recent example,” the Brennan report said. That race was an open House seat where Democratic turnout was 15 percent higher than typical election years and a conservative Democrat won by 627 votes — a wave turnout resulting in almost a statistical tie. (In that race, some Republicans also voted for the Democrat or didn’t vote.)

“But surprise results under remarkable political circumstances should not obscure the more fundamental lesson of this decade’s maps — gerrymandering matters and it matters a lot,” the report warned. “Even if 2018 proves to be an unusual year in a greater than normal number of districts, and produces a surprise surplus of Democratic wins, the effects of gerrymandering will return with a vengeance if 2020 looks more like 2012, 2014 or 2016.”

That takeaway points to one under-appreciated facet of this year’s elections. If Democrats want to prevent the 2020s decade from being Republican-dominated via extreme gerrymandering, they need to elect Democratic governors in states where they can veto bad maps — because gerrymandered red legislatures are not likely to change. Some of the most extreme GOP gerrymanders are in states like Michigan, Ohio, Georgia and Florida that have open governors' seats this year due to term limits.

The Brennan report adds new detail to the height of the blue voter turnout wave needed for Democrats to retake power this fall. But extreme gerrymandering is not the end of the story.

As AlterNet readers have heard before (and as detailed in my new book, Democracy Betrayed: How Superdelegates, Redistricting, Party Insiders and the Electoral College Rigged the 2016 Election), extreme gerrymanders convey a starting line advantage of about six to eight points. (The Brennan Center figures are bigger.) But the red states with the most extreme gerrymanders also passed the most restrictive Election Day voter suppression laws. Academics and congressional researchers have said those measures deter an additional two to three percent of voters at the finish line — the vast majority of whom are assumed to tilt Democratic.

This partisan tilt comes from stricter state voter ID requirements for first-time voters to get a polling place ballot — such as states that do not accept college IDs — or other rules that curtail voting options. In Georgia, the Republican legislature and GOP secretary of state — now running for governor against a Democratic legislative header — want to close the polls an hour earlier in Atlanta. That would undoubtedly cut into the blue wave from people seeking to vote after work. (Those individuals will get to vote if they wait in line, but some will see long lines and skip it.)

Another current example of GOP voter suppression that’s outside the gerrymandering box comes from Wisconsin, where the GOP trifecta — they control the governor’s seat and the entire legislature — has been refusing to hold a special election to fill an open House seat. That’s been the subject of ongoing litigation, where delays due to legal posturing help the GOP by keeping the seat open.

I have previously written that Democrats need at least a 10-point popular vote advantage in the most gerrymandered districts — and the most voter suppression-burdened states — to emerge as winners once the votes are counted this November. That estimate might be too conservative, given the Brennan Center’s study and examining other results in recent elections.

In the Pennsylvania-18 House race, the Democratic turnout was 15 percent higher — and many Republicans either didn’t vote or voted for Democrat Conor Lamb, who won by 627 votes out of 228,378 cast, a margin of one-tenth of 1 percent. In last November’s Virginia House of Delegates races, its lower state legislative chamber, the Democrats had a 9.5 percent statewide popular vote advantage. However, due to gerrymandering, the legislative majority came down to one seat, which was tied. The Republican incumbent prevailed, keeping the body red-run, after his name was drawn from a bowl (as opposed to using digitized images of scanned ballots for the recount — but that’s another story).

“Although gerrymandering has long been a feature of American political life, this decade’s maps durably lock in advantages for both parties with unprecedented precision,” the Brennan Center report said. “This state of affairs turns on its head the Framers’ notion that frequent elections would ensure Congress was a ‘miniature, an exact portrait’ of the people as a whole.”

Gerrymandering is not the elephant in the living room — it is the living room. But once swing-state Republicans adopted their hyper-partisan maps in 2011, they didn’t stop there. In states across the Midwest and South, Republicans added additional voter barriers — hurdles that account for the difference between statewide popular vote majorities and narrower vote counts where a minority party emerges victorious.