Oklahoma has approved a teacher pay increase, but the teachers' union insists the concession was inadequate 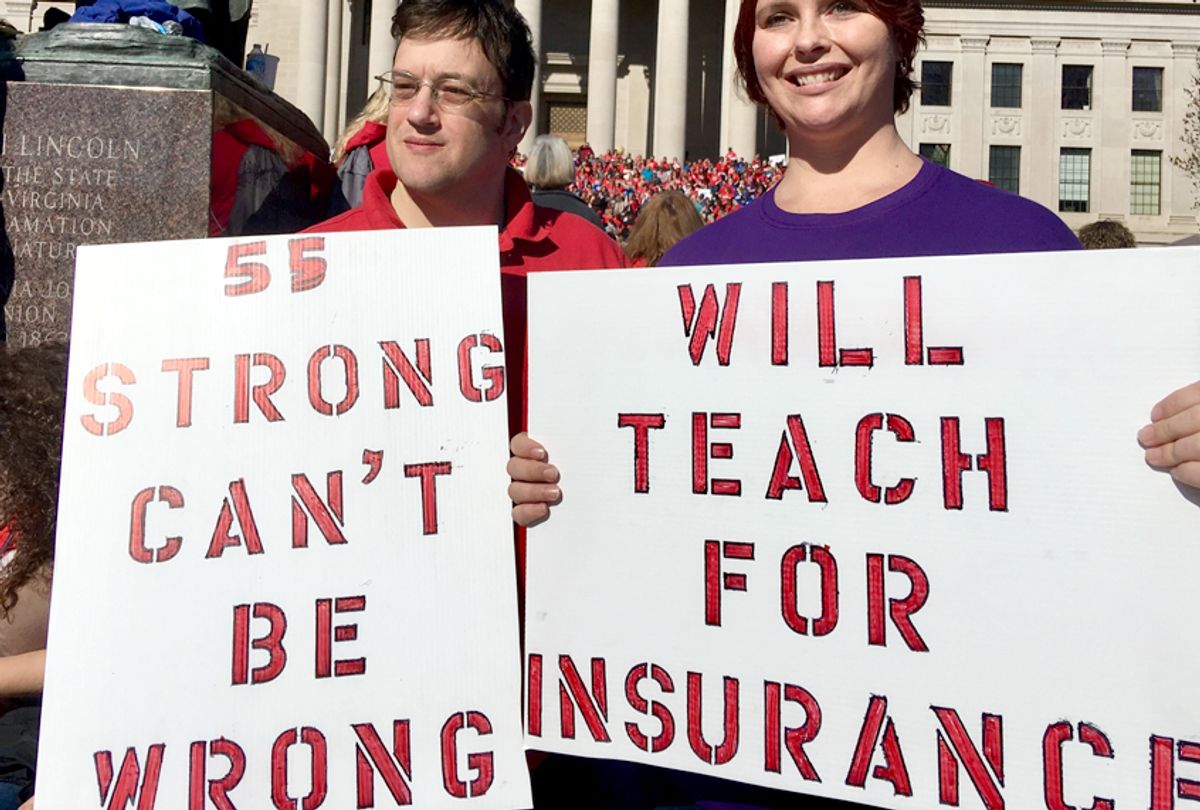 Teacher protests are sweeping the country as America's educators fight back against political systems that saddle them with inadequate pay.

A teacher strike in Oklahoma looks like it could still happen, after their union rejected a recent pay raise as an inadequate concession. The concession itself was a $6,100 pay raise for Oklahoma teachers, approved by the state legislature and supported by Gov. Mary Fallin, who described it as a "historic moment," according to CNN. She also noted that it was "not easy" getting the measure, House Bill 1010XX, to be accepted by enough legislators to become policy. It pays for teacher pay by raising taxes on fuel, cigarettes and lodging, according to Time.

Fallin's proposal offered far less than the teachers were demanding. The Oklahoma Education Association had called for a $10,000 pay raise for its teachers over the next three years and a $5,000 pay raise for full-time support professionals, including bus drivers, food service workers and custodians. Even with the $10,000 pay increase, Oklahoma teachers would still be paid less than the national average (they rank 49th in the country on a list that includes the District of Columbia): The average Oklahoma teacher is paid between $41,150 and $42,460 each year, well below the national average of $59,020 to $61,420.

"While this is major progress, this investment alone will not undo a decade of neglect. There is still work to do to get this legislature to invest more in our classrooms and that work will continue Monday when educators descend on the capitol," Alicia Priest, the OEA president, explained in a Facebook video.

She added, "Educators across Oklahoma have said, 'Enough!' Their frustration is justified, but that frustration — because of years of broken promises — turned into courage, and that courage turned into energy, and that energy into momentum, and that momentum created this moment that forced that legislature to act."

That momentum did not begin in Oklahoma and does not seem likely to end there.

The trendsetters were teachers in West Virginia, whose longstanding strike eventually led to a 5 percent pay raise. In Arizona, teachers are threatening to strike unless they receive a 20 percent pay raise, an increase in school funding to the levels they'd been at before the Great Recession (in 2008) and a pledge to stop cutting taxes until Arizona has the same amount of per-student spending as the national average, according to The Washington Post.

Meanwhile, at least eight school districts were forced to close in Kentucky as a result of teachers' dissatisfaction with a new pension plan, according to CBS News. According to the plan passed by the state legislature (in a process that critics decry as having been rushed and snuck into an unrelated sewage services bill), newly hired teachers would see their pension benefits change from an "inviolable contract" to one that could be changed by the state government. There are also complaints that the bill will not implement the annual cost of living adjustment and will limit the number of sick days that teachers can put toward their retirement plans, according to CNN.

One state senator, Republican Damon Thayer, tried to defend the bill by arguing that it "is good news for teachers, current, retired and future, because it puts Kentucky's pension systems on a path to sustainability."

Many teachers do not see things that way, as Jefferson County's Hallie Jones learned when she established a Facebook group "Sickout!" expressing her disgust with how Kentucky's teachers are being treated.

"I set up the Facebook group around 9:30 and then I was looking at it and I was really confused because it had only been 20 minutes and there were 300 or 400 members," Jones told Salon. "And then it jumped up to 700. And I thought, 'Oh, there's another group!' And maybe I just clicked the wrong one. But now I'm in this bigger group. But then I realized the group that I had started went viral. So I was a little freaked out and things just happened. Now I woke up this morning and there were 7,200 people in the group."

That number kept rising through Friday.

"The teachers do have some legitimate complaints about the pension bill and a lot of that stems from teaching as a calling," one assistant principal, who asked to remain anonymous, told Salon. "The teachers really go into education in order to make a difference in children's lives, and some of the complaints that educators have with this is they know this is not what is best for kids."

They added, "For myself, as an administrator, the main issue with this is, the educators that come into the pension system in the future are going to be put into a different pension system than the one we are currently in. This degrades our current pension system and leaves it less stable. It also is not as good of a system for the people who are coming into it in the future. We already are having difficulties finding teachers — there is a teacher shortage currently — and what I can say is, all of our kids in Jefferson County deserve the best teachers."

Lauren Dowell, a teacher in Jefferson County, reinforced this notion with her personal story.

"I have a daughter. She is currently teaching English overseas in South Korea. She has found her calling, I think," Dowell told Salon. "She loves the kids, she loves the profession, she loves everything about it. I cannot encourage my child to go into teaching here because I don't think she has a secure future as I was promised when I started."

What started out as a movement in West Virginia seems to have evolved into something more. On one level, it is a movement that could transform how education is carried out in this country; teachers are making it clear that, while they didn't enter this profession to make money, they refuse to allow that fact to be used as justification for economically exploiting them. In a deeper sense, however, this story is that of how a once-moribund institution — the American labor union — has suddenly and unexpectedly re-emerged as a potent force in America's ongoing political and cultural narrative.

It remains to be seen whether the teachers in Oklahoma, Arizona and Kentucky will get what they want from their state governments, but it's unlikely that this particular genie will ever be put back in its bottle. Teachers are educated people by their very nature, and they're too smart — and, it seems, too organized — to take being underpaid lying down anymore.