What to expect if China's space station crashes on land

It's probably not going to hurt anyone, but if it crashes down at night it could make a cool light show 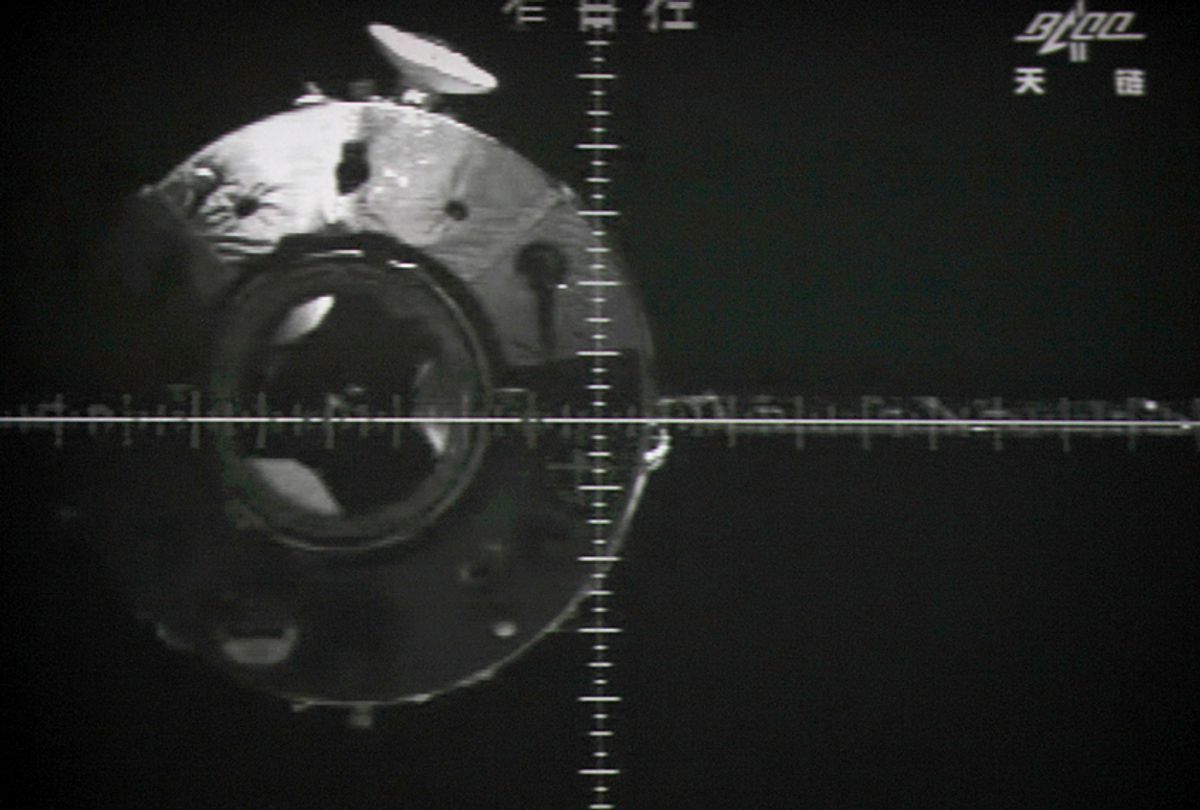 The Tiangong-1 module is seen via a camera in the Shenzhou-9 spacecraft. (STR/Getty)
--

This week, the Chinese space station Tiangong-1 is expected to crash down to Earth. The exact date and location are not precisely known, as the space station is currently in orbital decay, spinning ever-closer towards Earth as upper atmosphere particles provide the friction that will soon result in an uncontrolled, fiery descent.

But don't worry about the astronauts — this space station is long-abandoned. Tiangong-1, which means “Heavenly Palace,” was China’s first space station. On September 30, 2011, Tiangong-1 was launched into a near-Earth orbit on a Long March 2F/G rocket from the Jiuquan Satellite Launch Center located in the Gobi desert in Inner Mongolia. According to The Aerospace Corporation, an independent, nonprofit that does research for the space industry, Tiangong-1 weighed 9.37 tons (18,740 pounds) at launch, and was about 34 feet long and 11 feet in diameter.

The original plan for Tiangong-1 to return to Earth was to use a thruster burn in order to control its descent. However, on March 16, 2016, China reported that Tiangong-1's telemetry services, its automated communications system, had “ceased functioning.” Tiangong-1 has since been in a “decaying orbit,” meaning it will end with a slow, uncontrolled descent back to Earth.

The Aerospace Corporation’s Center for Orbital and Debris Reentry Studies (CORDS) is closely monitoring the much-anticipated reentry, and estimates that it will re-enter Earth’s atmosphere plus or minus two days from April 1, 2018. Experts anticipate it will land somewhere between the latitudes of 43° north and south. Surviving debris is expected to find a home in the ocean — perhaps unsurprisingly, given that most of Earth's surface is ocean.

But since its reentry is literally an uncontrollable affair, it’s possible, albeit unlikely, that pieces of Tiangong-1 could hit land. If that happens, what might such a scenario look like?

“The odds of space debris hitting you are less than one in 1 trillion,” The Aerospace Corporation explains in its statement about Tiangong-1. That is comparably unsurprising; Earth is a big place, meaning one 9-ton spacecraft has a great chance of crashing down in an uninhabited area.

Marco Langbroek, a Dutch astronomer and archeologist who also tracks classified military satellites, explained to Salon that Tiangong-1 will certainly break apart into multiple pieces when it reaches 49 miles (80 kilometers) above Earth — lessening the likelihood of a catastrophic collision.

“Most of the resulting pieces will burn up before they reach ground (or sea) level, but a few might survive,” Langbroek explained in an email. “Notably, rocket part engines, fuel tanks, and inert gas spheres often tend to survive reentries.”

While the surviving debris won’t be especially large, an impact on land could still do some damage — specifically if the fuel tanks land intact, which could release a toxic fuel. "Surviving debris from Tiangong-1 might be carrying or be comprised of toxic materials," the Aerospace Corporation explained in their statement.

“That is a potential risk to people close to the impact (either during the impact itself, or when they check out debris they saw falling),” Langbroek explained. “Rocket fuels, e.g., hydrazine, tend to be very toxic, and inhaling fumes escaping from a damaged tank with fuel remnants can kill you.”

In other words: If you see falling debris from space, run the opposite way, and inform emergency services.

Langbroek emphasized that it’s important not to “over-dramatize the dangers,” and that the chance of Tiangong-1 hitting one of the cities in its potential path — such as Washington D.C., San Francisco, Boston, Denver, Lisbon, or Barcelona — is very small.

Jonathan McDowell, an astronomer at The Harvard-Smithsonian Center for Astrophysics, explained that predicting exactly where it’s going to land — and with enough time to provide a sufficient warning —  will be very challenging. That's because Tiangong-1 is currently orbiting Earth at about 17,000 miles per hour. Miscalculating by a few minutes would mean Tiangong-1 had moved hundreds of miles away.

“I would say we will know about an hour after it’s happened,” McDowell said.

McDowell explained that even if the space station does make an impact on land, the pieces will be very spread out. One piece might land in San Francisco, for example, and another piece will land 100 miles away.

“The worst case is that one piece, or a couple pieces, hit a building and cause some damage,” McDowell said, explaining that the damage would be equivalent to a small plane crash.

What we can all hope for is that the spectacle will happen at night which will likely give city dwellers some sort of light show.

“If it comes down over a city at night it will make a streak in the sky that people will be impressed by — and scared by,” McDowell said.