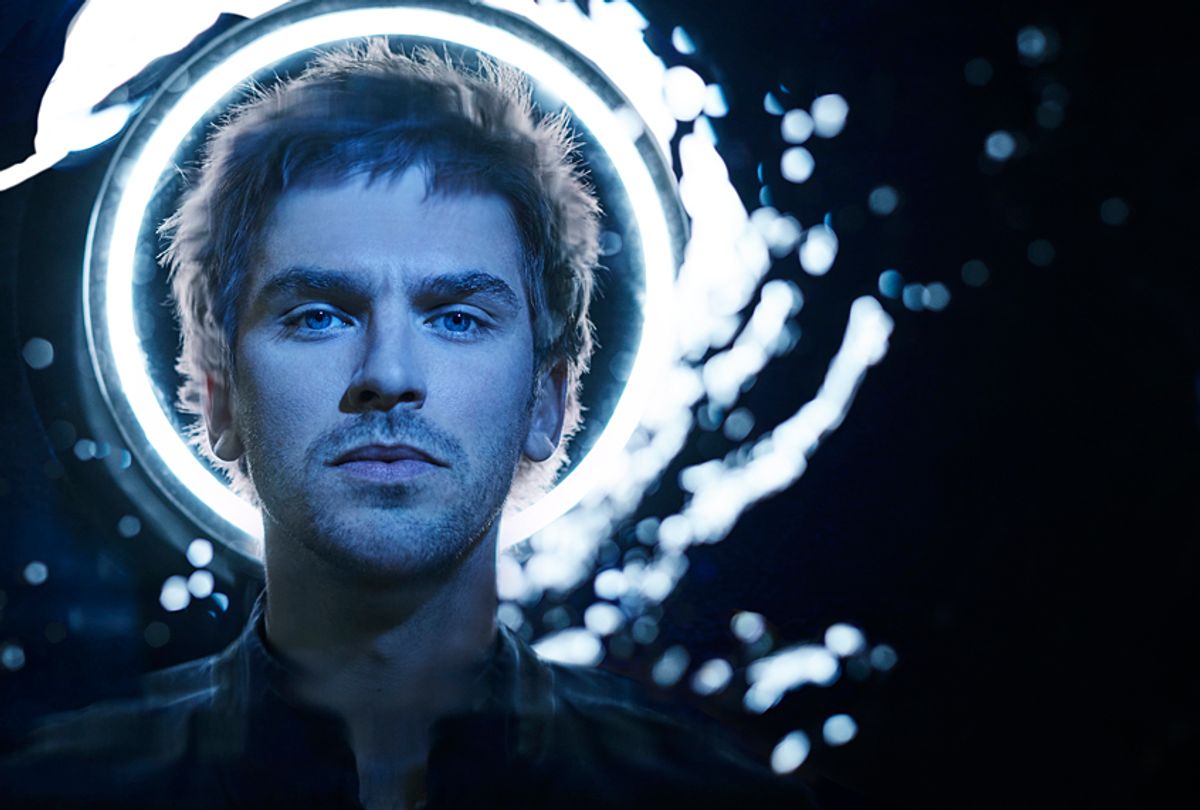 Sanity is a trick. An illusion. The wool the brain pulls over our eyes to help us navigate the unfathomable, whether it’s a situation or physical place or, in the case of David Haller, the hero of “Legion” the entire world.

The FX series returns Tuesday at 10 p.m. for a second season that flips all that viewers learned in the first, and take for granted, on its ear. Haller, played by Dan Stevens, spends most of his life bouncing between mental institutions convinced of his insanity. The revelation of season 1 is that David is quite sane, and in fact, happens to be the world’s most powerful mutant. It’s the world that has descended into madness.

“Legion” is a Marvel property, and an extension of the X-Men universe. But its creator Noah Hawley has been granted ample artistic license to interpret the world according to David, resulting in stunning settings and a sensibility influenced by ‘60s pop art while, at the same time, never quite allowing the viewer to place it in any recognizable time.

When we reconnect with “Legion” in season 2 the team surrounding David has become a tad helter-skelter.

Its leader Melanie Bird (Jean Smart) is in the depths of despair, shattered by regaining her long lost husband Oliver (Jemaine Clement) then quickly losing him again to the evil entity known as the Shadow King, or Amahl Farouk (Navid Negahban). David’s lover Syd (Rachel Keller), along with Ptonomy (Jeremie Harris), Cary (Bill Irwin) and Kerry (Amber Midthunder) are at a loss, as is the Shadow King’s minion Lenny (Aubrey Plaza), who is unsure of her place in existence . . . if she exists at all.

This second season heightens the drama’s surreal, unwieldy feel by, in part, shifting its storytelling influence out of the aesthetic realm and into the clinical. The look, sound and pacing of the first season was influenced in part by Pink Floyd’s concept album “Dark Side of the Moon.”

Season 2, however, explores how sanity can amplify across populations and entire cultures. A number of popular psychology texts have explored this idea, but Hawley’s intent is to take these concepts off the page and give them life and substance in the context of a linear narrative — one inspired by the comic book universe. It’s heady, beautiful stuff.

To get a better understanding of how he conceptualized this season, I recently spoke with Hawley about “mob psychology,” and whether the second season of “Legion” might be interpreted as a commentary on what’s happening in our real mad world.

One of the ideas you floated at a recent press conference was that this season explores the ways that mental illness can also be cultural. Can you expand upon that?

Well, think about a meme, which is viral — a virus which is an idea, right? An idea can be contagious. We have these what I call educational segments in the show this year, which are basically my way of trying to understand and explain certain concepts about human psychology and mental illness.

If we're trying to understand what a delusion is, it's helpful to say, ‘Well, a delusion is an idea like any other idea," and to visually represent it as an egg, right? A healthy idea hatches and a little chick comes out. You think, ‘Oh, it's a healthy idea.’ Then the other egg hatches and something twisted and horrible comes out, and that's a delusion. Now you're able to kind of turn something conceptual into something visual.

In the third episode we have a whole sort of segment about what are called conversion disorders. The example that I pull is from a real case involving these cheerleaders in upstate New York. It's usually a high-stress scenario under which one person will develop literal physical symptoms that are stress-induced, and then they'll become contagious. You'll literally have this team of cheerleaders who end up with this very pronounced tick that is not psychosomatic. It's not all in their head. It's a physical symptom.

If the idea of illness can become illness, then you have to wonder what else about our society could be a disorder. There's this great Nietzsche quote, which goes, ‘Insanity in individuals is rare, but in groups it is the norm.’ Certainly in our internet era you're seeing people, groups of people, who seem to have their own version of reality. The show is interested in exploring that, that idea that reality is a choice, and because of the way our minds are wired if you're a paranoid person you see conspiracies everywhere. If you're an optimist, the world looks like a pretty good place. Neither of those things has much to do with reality. It's all about how your mind is hardwired, which I think is interesting.

How much of the wider cultural discussion about sanity or insanity, especially at it pertains to the direction our politics has taken over the last year in particular, influenced the direction of this season, if at all?

Well, it was interesting because with ‘Fargo,’ the third season, it was always my plan to try to deconstruct the statement that starts each episode: ‘This is a true story.’ This idea of true, what does that even mean? Is it a story, or is it true? What is truth?

I found myself writing to something that became very much in the zeitgeist about alternate facts, etcetera. ‘Legion,’ in its conception — which was, what, in 2014? — predated whatever cultural moment we're having. It was always about undermining reality as a concept on some level. You have your subjective experience of reality, and that's your reality. Maybe it's a hallucination or maybe it's real, but you're still seeing it.

Then, yes, going into this year I was sort of more interested in looking at it as, if the first year was about an individual who either is or isn't insane, what if the second year is more about a sane man in an insane world? It didn't come out of any sort of topical desire to look at what we’re going through now.

At the risk of geeking out here, as you were explaining the theme of season two, a book called "Extraordinary Popular Delusions and the Madness of Crowds," comes to mind. I think that may have been one of the more popular psychology books on this phenomenon.

Every age has their psychology reference texts. What were yours? Were there particular books or cases that you wanted to look into? Were there edge cases that not everybody knows about that you sought out, like the cheerleader case, and how did you find them?

I'm kind of a research junkie. [I have] these sort of research binders that I put together, and I do it personally. I don't outsource it. I end up creating these 30, 40, 50 page documents that are kind of incorporating books I've read or articles that I'm reading. Different ideas, both about the science of it and the psychology and the philosophy of it.

For me, the show, and any story truly, it's about [what happens in the plot], but it's also asks, thematically, what is this story about? If it's season 2 of ‘Fargo,’ it's about the death of the family business and the rise of corporate America. That's what it's about if I do my job right, but in order to tell a compelling story it there have to be a lot of ideas in it. Because ten hours of story, it's 500 pages of script. If you don't have something to say, what are you doing typing?

What was the most challenging aspect of the narrative for you to realize on-screen with this new season?

Well, some of it is I've never made a second season of anything, continuing stories with established characters.  I may have done it wrong. I just don't have any idea, but it did seem to me like, why would I repeat myself? People watched that story before in season 1, so it needs to evolve. If season one went from confusion to clarity, I didn't want to just live in clarity in season 2, but I also feel like what season 2 does is it becomes a bit more serious of a show on some level. The emotional stakes are higher. The honeymoon for David and Syd, their relationship now has to mature and grow.

I felt sort of instinctually that if you want the audience to go from a good show to a truly great show the audience has to really care and invest in the stories. In order to do that the show has to become a really great drama. It can't just be a fun genre show. It has to work thematically.

A lot of it for David is he's given these impossible choices to make. It's like, okay, you want to be a sane adult? Well, here's some impossible choices, and try not to let those drive you crazy. The Shadow King has a point of view. He's not just a villain. He's the hero of his own story and we're going to build empathy for him. . .The whole goal of the show is to be subjective, is to say, "Well, here's a show about a guy who doesn't know what's real and what's not real and who sees the world in a very unique way. In order to translate that to you I have to make a very unique show so that you understand his point of view.

“Legion” is probably one of the most experimental viewing experiences on TV right now, and in season 1, the aesthetics were at the forefront. Is there any piece, either of art or literature, that serves as this season's inspiration, as the second season’s “Dark Side of the Moon”? Is there any particular element that you're hoping that people will kind of look out for?

Well, the big experiment for me this year is these educational segments, which sound like eating your vegetables — I need to come up with a better way to describe them! It’s the idea about  the flexibility of what a television show can be. How is it that I can listen to [public radio series] "Radiolab" or "This American Life," or read a novel in which you can mix both a linear story, and also step back and go, ‘Well, in order to understand what happened next you need to understand this concept,’ and then back into the story?

In filmed entertainment we tend to not want to break that fourth wall and experiment with the structure of the show. So I guess the great experiment for me is to say, ‘Do these segments, which do over the course of the season add up to an important story point, is the audience enjoying them? Do they want to skip through them? Are they enhancing the story in the way that I hope they are?’

Part of what I'm excited that FX allows me to do is to experiment with the medium in a way that none of us are sure is going to work, but that's the fun of it. I hope that I'm rewarded for my ambition and risk-taking. Whether or not it succeeds 100% or not, it's always done with the best intentions.