DOJ lawyers have a duty to resist Trump on Russia probe

Sessions' potential successors are now in Trump's line of fire, so they should publicly pledge to protect Mueller 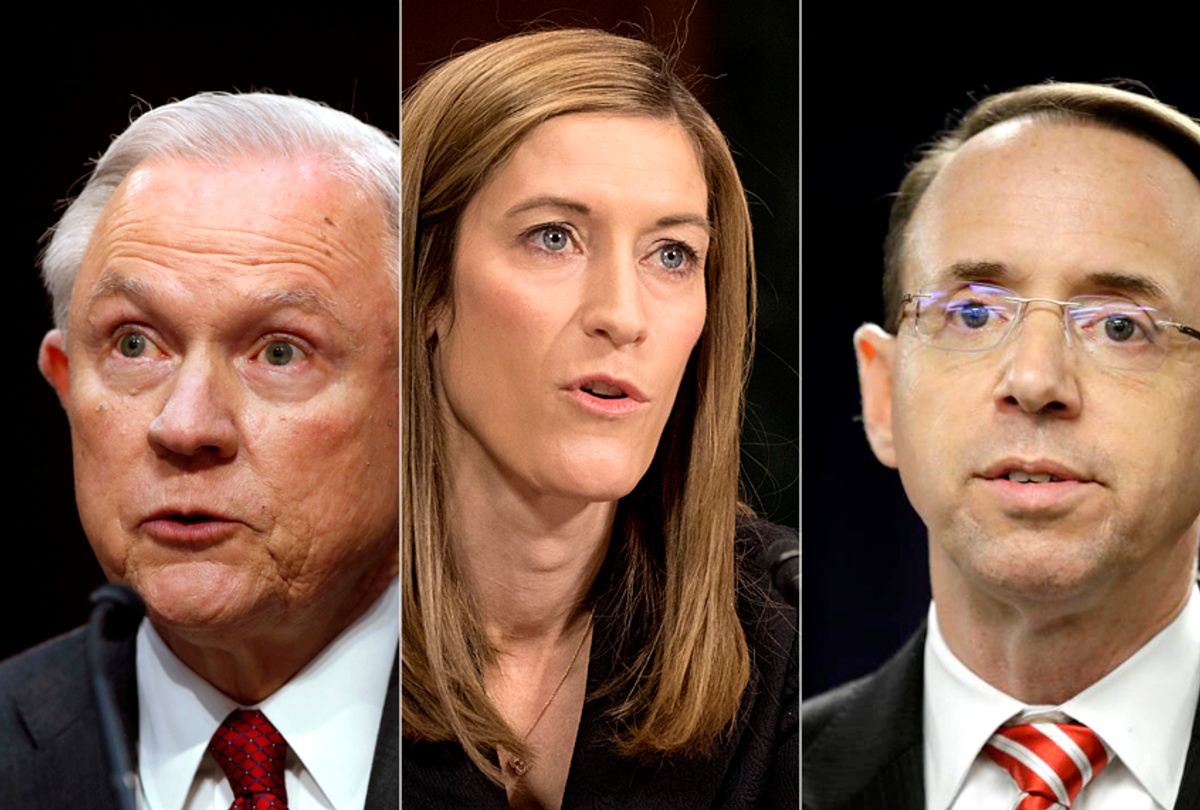 This week's statement of support by Sen. Thom Tillis, R-N.C., for Special Counsel Robert Mueller, joined by Sen. Chris Coons, D-Del., was a welcome bipartisan endorsement of the Russia investigation. Unfortunately, the legislation they have cosponsored to protect Mueller from improper firing seems stalled. That means other Republicans must follow Tillis’s lead if we are to ensure that Mueller finishes his work.

We think a good place to start would be for Mueller’s top colleagues at the Department of Justice to see Tillis and raise him one by pledging to protect Mueller — including to refuse if the president asks them to help remove the special counsel.

The DOJ and the FBI have been besieged by the White House. There have been direct hits like FBI Director James Comey’s firing and the successful demand for ex-FBI Deputy Director Andrew McCabe’s termination. There have also been (so far) less successful attacks like the presidential Twitter rants at Attorney General Jeff Sessions, his derogatory comments aimed at Deputy Attorney General Rod Rosenstein and the misuse of the “Nunes memo.” The barrage has been unrelenting.

Such a siege represents a real threat to our nation.

We are grappling with confirmed foreign interference in our elections via information warfare and attacks on our election administration infrastructure — at a minimum. The Trump administration’s distracting attempts to undermine its own DOJ and FBI only embolden those who seek to undercut our elections. We should be doing everything we can to shore up our system in preparation for 2018 and sanction those responsible for the interference. Unless Mueller is protected and allowed to complete his work, the real casualty will be American democracy.

Standing guard against that is Deputy AG Rosenstein. Sessions recused himself from overseeing Mueller due to his conflict as a member of the Trump presidential campaign. In his stead, Rosenstein has overseen Mueller’s investigation. The need to protect Rosenstein from Trump’s wrath and enable Mueller to do his job is widely understood. It has, for example, mobilized hundreds of thousands of people throughout the country to issue a preemptive warning to Trump: They will take to the streets in rallies in the event of a Mueller firing, any pardons issued for key witnesses, or a Rosenstein firing.

Now it is time for America’s top lawyers at DOJ to step up too. Every top DOJ official must publicly pledge that they will refuse if called upon by the president to interfere with or undermine Mueller’s proper investigation of criminal and civil misdeeds. That is particularly necessary for those who are most likely to one day be involved in overseeing the Mueller investigation.

The need for this public commitment has clear historical precedent. In 1973, during Watergate, the attorney general and deputy attorney general both resigned after refusing to obey President Nixon and fire special prosecutor Archibald Cox, and it fell to the next in line, then solicitor general Robert Bork, to do the deed. Most lawyers have little desire to be a modern-day Bork, but the White House attacks on the DOJ and the FBI make it clear that we must be prepared for Trump to search for someone to play that role.

So who is next in line to oversee Mueller? Until recently, directly behind Rosenstein was Rachel Brand. She is the recently departed associate attorney general, who many speculated resigned to avoid dealing with Trump’s whims concerning the Mueller investigation.

Next in line is the solicitor general, Noel Francisco, and two other assistant attorneys general, Steven Engel and John Demers. After them, two U.S. attorneys follow in line in a chain that Trump created. In March 2017, the president quietly changed the order of succession at the DOJ on the same day Jeff Sessions was sworn in as attorney general. First is Robert Higdon of the Eastern District of North Carolina and then Erin Nealy Cox of the Northern District of Texas. Higdon and Cox are both Trump appointees.

When asked, these lawyers may push back, saying that they are unable to predict the exact circumstances under which they could be asked to undercut the investigation. However, in light of reports that President Trump ordered White House counsel Don McGahn to fire the special counsel last June, proactive engagement is needed. In order to oversee the Russia investigation, any attorney charged with this duty must promise to protect it, with the clear-minded understanding that they are doing so to ensure the integrity of our democracy.

All eyes are on these senior attorneys at DOJ. This week, nine Senate Judiciary Committee Democrats led by Senator Richard Blumenthal, D-Conn., sent letters to the likely line of succession at DOJ asking them to promise publicly to protect the Russia investigation.

By now, almost every lawyer in the DOJ line of succession has to have thought about the prospect of being asked to fire Mueller. If they haven’t, they’re naïve. If they have, the stakes are now so high that it’s time for them to speak out and reaffirm their commitment to the rule of law and to the oath they took to support and defend the Constitution of the United States against all enemies, foreign and domestic.

Norman Eisen is a senior fellow at Brookings and co-author of “Trump on Trial,” a guide to the Jan. 6 committee hearings.

Victoria Bassetti is a fellow at the Brennan Center for Justice at New York University.