Donald Trump, defender of Christian America? It's not as ludicrous as it sounds

For Christian nationalists, Trump's presidency is a gift from God — and his unethical conduct is a major plus 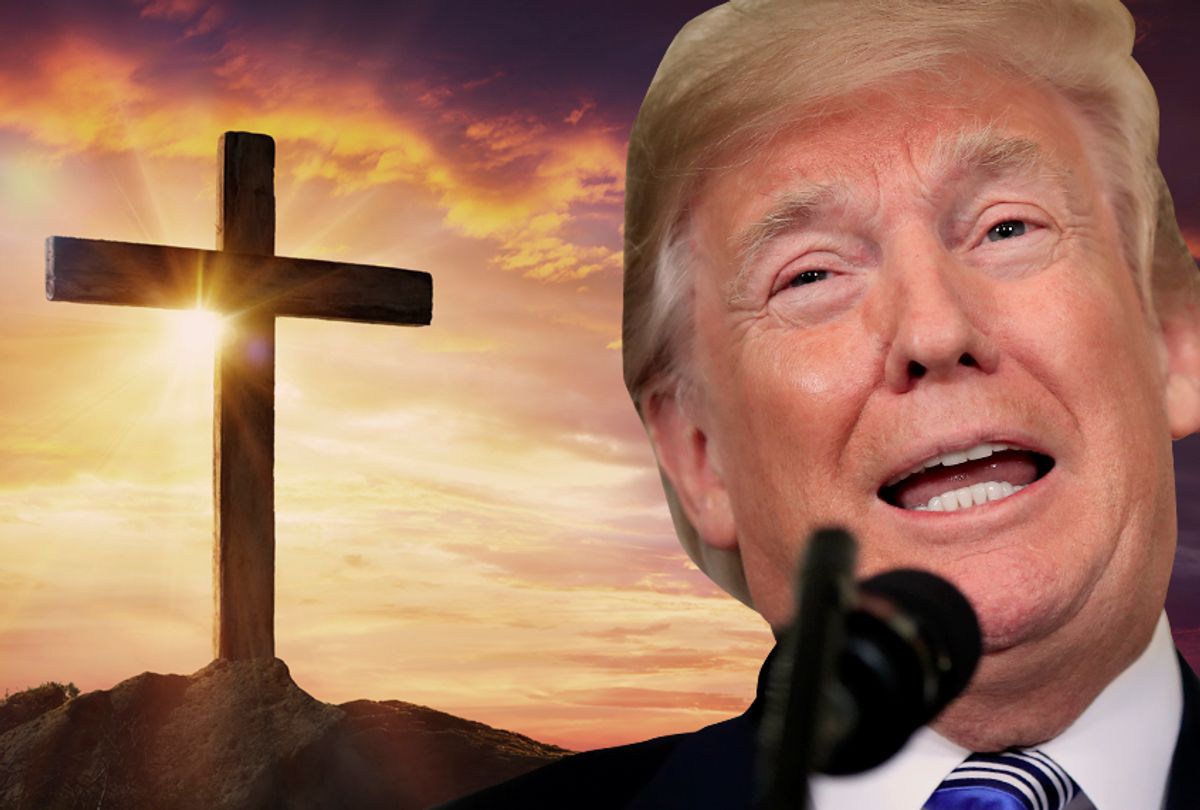 Consternation over evangelical support for Donald Trump got another jolt with Stormy Daniels' interview on "60 Minutes" last Sunday, but new research from Clemson sociologist Andrew Whitehead and two colleagues provides strong evidence that Trump is actually an ideal candidate for the Christian right. It sounds crazy, I know — but not to those in his evangelical base, a demographic that supported him by a ratio of roughly four to one, and others who share their particular worldview.

The key, Whitehead’s research shows, is Trump’s role as a champion of “Christian nationalism” — an Old Testament-based worldview fusing Christian and American identities, and sharpening the divide with those who are excluded from it. That stands in contrast to the tradition of “civil religion,” which “often refers to America’s covenantal relationship with a divine Creator who promises blessings for the nation for fulfilling its responsibility to defend liberty and justice.”

America is certainly understood as special, in this latter tradition — but that's rooted in a special obligation. “Christian nationalism, however, draws its roots from ‘Old Testament’ parallels between America and Israel, who was commanded to maintain cultural and blood purity, often through war, conquest, and separatism,” Whitehead’s paper explains. “Unlike civil religion, contemporary manifestations of Christian nationalism can be unmoored from traditional moral import, emphasizing only its notions of exclusion and apocalyptic war and conquest.”

When push comes to shove, the more vicious the leader, the better. The moral restraints of the deeply pious are the last thing you want for the job. Hence, Trump’s impious leadership makes perfect sense, once you realize what’s at stake. It’s a feature, not a bug. And evangelical voters, Whitehead argues, know it.

Using data from the Baylor Religion Survey, conducted shortly after the 2016 election, Christian nationalism predicted voter support for Trump better than any other explanations that have previously been provided, as reported in the paper, “Make America Christian Again: Christian Nationalism and Voting for Donald Trump in the 2016 Presidential Election."

The paper considered a range of factors others have highlighted, as well as religious activities and beliefs. Religion mattered deeply, it found, but not in the sense it is most often discussed in the political world.

“Knowing how religious someone is, like how often they attend church or if they view the Bible as God’s literal word to them, doesn’t help us predict" whether they voted for Trump, Whitehead told Salon. What's more important is whether or not "they view the U.S. as a Christian nation." Religious faith certainly shapes such views, he added, but the connection from there to Trump is indirect. “So the influence of personal religiosity on whether someone voted for Trump ‘flows through’ Christian nationalism.”

That last point helps explain why Trump’s lack of piety doesn’t seem to matter. “Support for Trump has more to do with symbolic boundaries than with personal piety,” Whitehead said. “Trump is a perfect test of the power of Christian nationalist rhetoric: It has little to do with the personal piety of the speaker, and everything to do with access to power.”

For example, consider the following chart, which shows how the likelihood of voting for Trump rises with higher levels of Christian nationalism, regardless of partisan identification. The increase is most dramatic among Democrats: those who score highest in Christian nationalism are three times more likely to vote for Trump than those who score lowest. 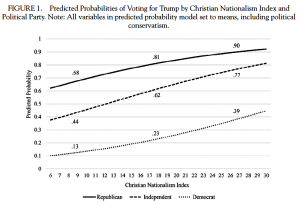 These findings make sense of a lot of Trump’s appeal, and why it’s so sharply divided. Those who don’t buy into Christian nationalism may be repulsed by the vulgarity of Trump’s continual taunting and name-calling. For those who do buy into it, however, such harsh rhetoric is well deserved — more than that, it’s vital to America’s survival. Hence Trump’s repeated harping on naming “radical Islamic terrorists.” Trump’s vehement insistence on such labeling underscores how well he serves as a champion of Christian nationalism. So, too, his earlier obsession with Barack Obama's birth certificate, which laid the whole foundation for his campaign.

This study can do what other studies haven’t because of the data source it draws on, the fifth wave of the Baylor Religion Survey, conducted shortly Trump's inauguration in early 2017. It asked both about presidential voting and “a host of measures on Christian nationalism, sexism, anti-black prejudice, xenophobia, Islamophobia, economic satisfaction, religiosity, political views and identity, and various sociodemographic characteristics.” Responses to those questions provide the raw material that makes this analysis possible.

In his post-election blog post, Gorski wrote in a similar vein:

To those outside the fold, Trumpism may appear to be an incoherent jumble of prejudice and fear. Seen from the inside, however, its various elements are knit together by hidden logic — the logics of blood and apocalypse. The metaphor of blood connects white racism (blood purity), unrestrained militarism (blood conquest), and no-holds-barred anti-terrorist policies (blood sacrifice). It is the hidden foundation that connects the border wall with promises to destroy ISIS and ignore the Geneva Convention.

Of course, there’s a distinct gap between the narrative argument Gorski presents and the hard data on which Whitehead’s study relies. There are no questions about blood in the Baylor Religion Survey, but the blood is there in the Bible itself, and Whitehead is conscious of the need to fill in the gaps.

The questions defining Christian nationalism are “somewhat innocuous,” Whitehead acknowledges, and are calculated as such, “in order to try and tap into respondents’ deeply held beliefs,” he explained. “If we tried to ask questions that were more explicit about dominion and conquest we would probably run into some response bias.”

Previous research, including his own, shows that these “innocuous” questions correlate with strongly exclusionary attitudes. There are six questions, all framed in terms of agreeing or disagreeing with a statement. Five involve what the federal government should do: Declare the U.S. a Christian nation? Advocate Christian values? Enforce strict separation of church and state? (That one is "reverse coded.") Allow the display of religious symbols in public spaces? Allow prayer in public schools? The sixth statement is “The success of the United States is part of God’s plan.”

Responses to those questions are “strongly associated” with a wide range of boundary-enforcing hierarchical attitudes that Whitehead ticked off: opposition to interracial marriage and interracial adoption, “antipathy toward non-Christian groups, particularly Muslims” and “decreased support for immigration and same-sex marriage.” Each has been documented in earlier studies. In short, even though these questions "aren’t explicitly asking about social dominance,” as Whitehead puts it, that’s exactly what they track.

Trump’s personal obsession with “winning” and dominating others fits perfectly into this framework. His enthusiastic embrace or gleeful celebration of social dominance — "I alone can fix it" — makes him a perfect candidate for the role of secular savior.

Trump does not allude to the Tribulation or the Second Coming in the way that old school religious nationalists like Jerry Falwell or Pat Robertson did. But Trump does portray the contemporary world as an apocalyptic hellscape. There are no demons or angels, no monsters or dragons. Just “real Americans” threatened by hordes of Syrian refugees, gangs of Muslim terrorists, and swarms of Mexican rapists. Trump’s apocalypse is a secular one.

Trump portrayed inner-city black life in similar terms, not just because he’s a racist (although he is) but because it fits into the Christian nationalist worldview he now champions. And in that worldview, he of course, is the champion:

With Christ out of the picture, the role of Messiah is open again. He claims that he and he alone has the power to cast these monstrous minions back into their respective pits, as long as his followers put their faith in him. “Believe me folks,” he often says, “I will do it.” I will deliver you from evil, I will redeem you from poverty, and I will lift you up again above all races. American will “win” again. In Trumpism, the Second Coming of Christ becomes the First Term of the Donald.

Put this starkly, it sounds like blasphemy, which is how those outside the fold might tend to see it. But within the fold there’s a rich tradition of rationalizations, as described by Frederick Clarkson of Political Research Associates, a progressive think tank in Massachusetts.

“​During the campaign, Christian right leaders invoked biblical figures who were not necessarily good people, but were used by God to achieve his purposes. This is still the story today,” Clarkson told Salon. “The idea is that God can use ungodly people to achieve his purposes, and various Christian leaders have publicly agreed that is what is going on now, and how they can restore the Christian nation that never was.”

It’s a comforting narrative that allows many religious conservatives to overlook a multitude of sins that would be vehemently denounced in any Democrat, and even in some Republicans. "Cloaking the abhorrent figure of Trump in a mystical mantle of godly authority," Clarkson said, "goes far beyond any previous president's efforts to use religious leaders to imply, if not directly invoke, the idea that his agenda is in conformity with God's plan and that his leadership is endorsed by God."

Whitehead’s paper and the larger body of research on Christian nationalism can help us become more precise in understanding the nature of Trumpism, and the broader religious right agenda that has fueled such strong and deep support for him. When Christian nationalists talk about “religious liberty,” for example, they do not mean it to apply to everyone equally.

According to Clarkson, Tony Perkins of the Family Research Council, a Christian right group, has said that "he believed that religious freedom is reserved for orthodox viewpoints only. This is the vision of the Christian nation,” Clarkson continued, “in line with a seminal thinker of contemporary Christian nationalism, the late R.J. Rushdoony, who wrote that ‘only the right have rights.’”