"The Crossing": A sci-fi parable set adrift in midseason

Hard to tell what this series aspires to be. A commentary on how we view refugees? A 'Lost' clone? Or just doomed? 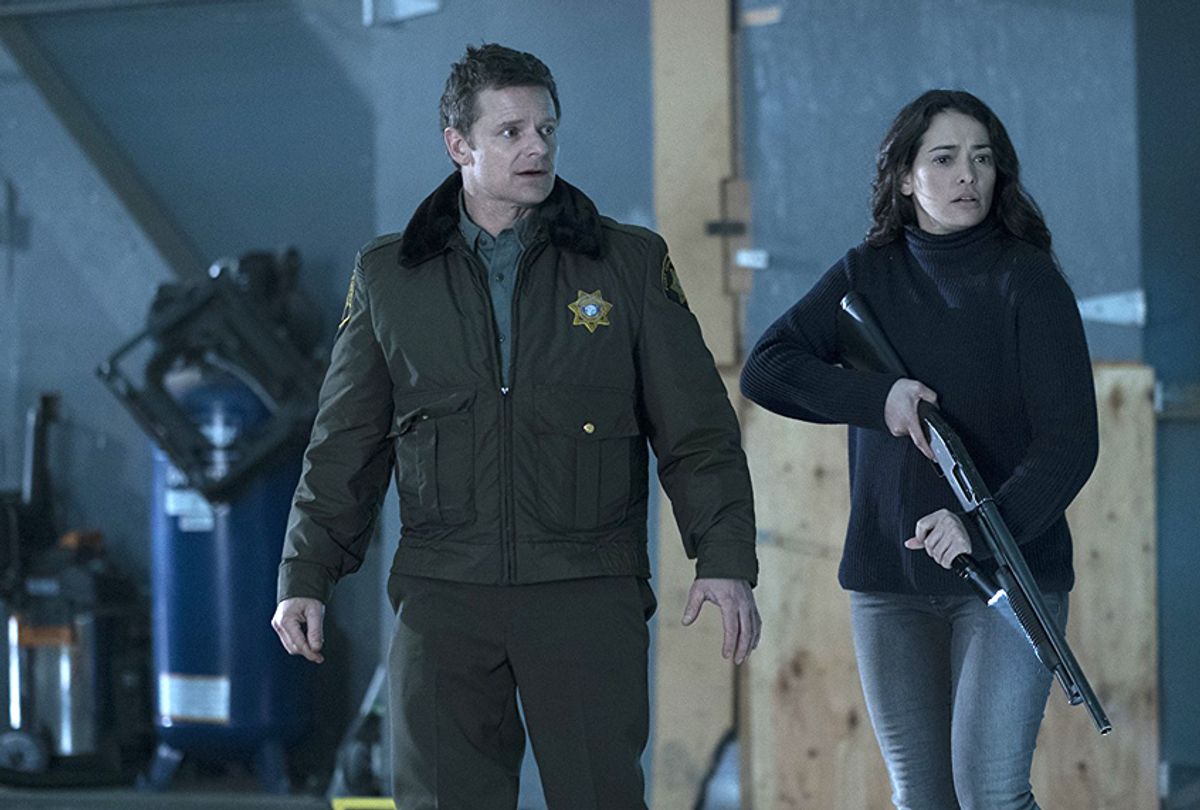 Steve Zahn and Natalie Martinez in "The Crossing" (ABC)
--

It may be impossible to forget the stark image of Aylan Kurdi, a Syrian toddler dressed in a red shirt and tiny shoes, face down and lifeless on a Turkish beach. He was one of many who drowned in the Aegean sea in that 2015 incident, cruelly ending their desperate flight from a homeland torn in war.

But he wasn’t the first or the last. Countless refugees fleeing a number of war-torn African countries have drowned in their attempt to breathe free air, washing up on the shores of Greece and Libya and forcing Europe to face the dire reality of a growing migrant crisis.

“The Crossing,” ABC’s new drama debuting Monday at 10, begins by quite intentionally imitating these horrendous visuals. Only in its fictional world the shore is in Oregon, and the asylum seekers — some alive, many more dead — are our own citizens. There are questions to be asked, but fewer excuses. Whoever is in charge can’t rail against shithole countries or criminalize them as illegals. These are Americans fleeing a ravaged and dangerous future America.

Science fiction has a long tradition of employing allegory to make a point about human nature, societal ills or geopolitics. If this is what you’ve come to expect from a show employing genre devices such as the tried-and-true time portal, you may be tempted to search for meaty developments to emerge in future episodes of “The Crossing.”

However, if you’re familiar with the track record of genre series given midseason berths, or really, most genre series that have debuted in the way of “Lost,” you also know that it’s best not to overthink this noise, because the show probably isn’t going to be with us for long. Which is too bad, given that it stars Steve Zahn, a consistently enjoyable performer capable of better work.

In the way of most broadcast television sci-fi, “The Crossing” doesn’t lean heavily into prattling about time rifts and physics, which is smart because it doesn’t need to. By introducing this wrinkle, however, executive producers Dan Dworkin and Jay Beattie are signaling their intent to explore heavier themes as the writers construct the thrills of a mythology into the piece.

Zahn plays Jude Ellis, the new sheriff in the town of Port Canaan. When dozens of men, women and children emerge from the waves, including 47 survivors, he quickly finds himself in the midst of a humanitarian crisis. Homeland Security swoops in, led by Agent Emma Ren (Sandrine Holt), who interviews the survivors and finds out that they’re seeking asylum from the United States of nearly two centuries into the future.

But the seeds of their desperation are familiar to today’s viewers — they’re escaping horrifying circumstances that are only alluded to in the pilot, the gravity of which made them leap into a mysterious portal not knowing that the other side began underneath enough water to drown most of them.

“You can’t imagine what will become possible.”

“You have to understand, we had no other option.”

Now, it could be that I’m reading too much into all of this, hoping for “The Crossing” to get in some rough narrative territory when, in truth, it may be merely gesticulating at parallel ironies as opposed to exploring and exposing them.

But that’s the nagging part about evaluating this all-too-ordinary feint and an extraordinary story. Because that the first episode hints at the drama’s aspirations to be and do many things at once. And this dilutes its sense of necessity. The story is part mystery, part buddy-cop yarn, part family drama involving parents losing children to the chaos of churning sea water, and part old-fashioned “War of the Worlds” thriller portending a dystopia ruled by genetically enhanced Übermenschen.

That’s right — there are superhumans running about known as “Apex” beings, a class dedicated to wiping out folks like you and me who thought we were doing pretty well if we got a few jogging sessions or CrossFit classes into our schedule. Apparently these Apexes have taken control of the world’s government and no longer have use for the commoners; hence, the leap across time that unwittingly ends with scores of folks, including a mysterious woman named Reece (Natalie Martinez), at the bottom of the sea.

And what about those commoners? The future Americans are comprised of a variety of cultural backgrounds and ethnicities, which could be a function of diverse casting or it could have a bearing on future storylines. Tossing in that “these refugees are us” wrinkle removes a few basic distractions, which is smart, while opening up the possibility of other conflicts to explore if the writers are bold enough to do so. I mean, there has to be something to the fact that the main spokesperson and most optimistic evangelist for our time is Caleb (Marcuis W. Harris), a black man who took the leap with his wife Rebecca (Simone Kessell).

To quell the grumbling among his group, Caleb tells them, heart full of promise and voice steady with optimism, “Listen, it’s normal not to trust them, considering where we came from. But this is a different place, a different time than when we left. This is the America of Old. The long peace. Everyone has rights here, no matter where they’re from.”

Apparently there are no news or YouTube archives in the future. Either that, or Betsy DeVos really did lasting revisionist damage to the history curriculum provided to our nation’s public schools.

ABC only made one episode of “The Crossing” available to critics, so I have no idea whether the show will ultimately lean into the fantastical cogs of its sci-fi or treat that aspect of the plot like a sauce as it follows the refugees’ acclimation process in this America of Old — our America.

It’s entirely possible, if not probable, that the drama’s potential for wading into thornier discussions about race, culture and favored status in our time will be set aside in favor of the “Lost”-ier elements of the story, or its procedural aspects.

Even if the show does go that direction, that may not save it. Television history is full of series that attempted to find a home with viewers. Remember “Surface?” “The Event?” “Prey?” “Resurrection?” Are you watching “Timeless” right now? You should be. That show barely made it back to the air.

Be that as it may, “The Crossing”  has a tough road ahead and perhaps a short amount of time to make any points it wants to make about humanity and the ways we’re shifting the curve of history right now. That could be a potent concept to examine, maybe even a tool to increase our sense of empathy. After all, European citizens see the bodies, interact with some survivors in their cities as they’re starting over.

But we Americans, nestled in our long peace, view these humanitarian crises at a distance, either from across the wide Atlantic or, closer to home, the Rio Grande. We see the pictures and hear the damaging arguments that asylum seekers are here to take our jobs and drain our safety net. They're bringing drugs, they're bringing crime, our leader tells us.  They're rapists and some, we’re to assume, are good people.

The problem is that many don’t see them as Americans, or even potential Americans. Wouldn’t it be great if a series came along that made the argument, with clarity and precision, that the main thing that should matter is our humanity? I wonder if “The Crossing” could be that show.