What a friend we have in Black Jesus: "Jesus Christ Superstar Live"

By offering up a live version of the Broadway hit starring John Legend, NBC might resurrect the musical trend on TV 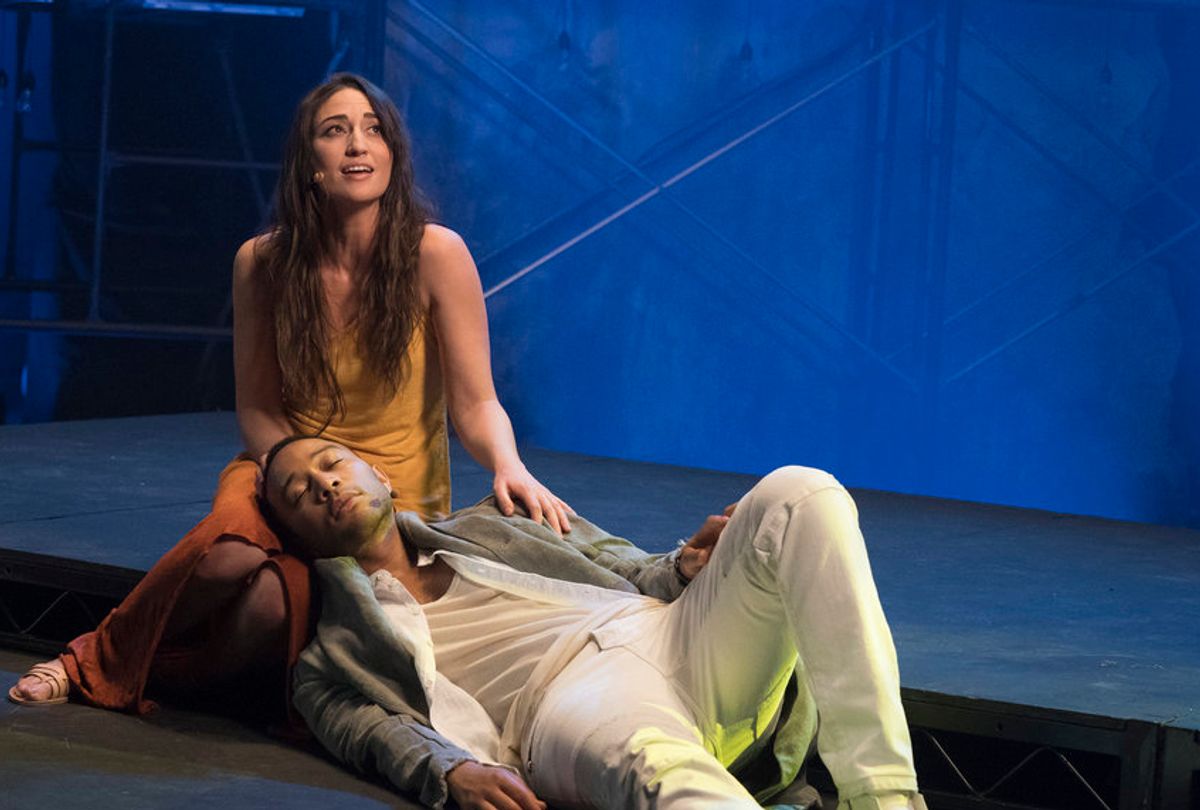 Brothers! Sisters! Have you heard the good news? This Sunday on NBC, the holiday covenant between broadcast television and viewer shall be fulfilled in all of its live glory and, if the hype is worth anything, shall mark the rebirth of a flagging trend.

After you’ve had your fill of ham and Peeps, gather thy people upon the couch at 8 p.m. on Sunday, when unto us another musical will be given: Andrew Lloyd Webber’s “Jesus Christ Superstar Live in Concert.” Yea, there will be a great wave of tweeting surging across the land, along with shouts of joy and cackles of ridicule.

You may be wondering why any televised live musical is worth your time these days. Who can blame you? Until NBC announced this special it was widely assumed the thrill of live musical theater on TV was gone.

But once upon a time we flocked to it, particularly when Carrie Underwood starred as Maria in NBC’s December 2013 broadcast of “The Sound of Music Live!” Five years ago its success shocked the industry much in the same way the “Roseanne” revival is blowing everybody’s minds this week.

The two could not be more different, although they have a magic number in common: Each drew an audience of 18 million, and each proved that some entertainment — done well, we should add — can still unite America’s thoroughly fractured viewership. The success of “The Sound of Music Live” begat “Peter Pan Live!” in 2014, which begat “The Wiz Live!” in 2015, which begat “Hairspray Live!” in 2016.

Inevitably, we also were subjected to Fox’s off-holiday responses in the form of two 2016 musicals “Grease: Live!” and “The Rocky Horror Picture Show: Let’s Do the Time Warp Again” (filmed, not live; also not good). The cascading effect resulted in diminished ratings returns for the whole subgenre.

But if you thought the musicals-as-stunt-programming trend blew itself out completely, you are mistaken. Nothing in TV goes away entirely. NBC merely needed to wait until our yearning for respite and distraction became so acute as to make us thirsty for harmony.

Hence this live broadcast of a musical take of The Passion of the Christ, a Broadway classic modernized for the “Hamilton” age and featuring a black Jesus: the title role is played by pop star John Legend.

Sunday’s version of “Jesus Christ Superstar Live in Concert” also stars Sara Bareilles as Mary Magdalene, “Hamilton” actor Brandon Victor Dixon as Judas and, playing the role of the carrot lure for the pop-averse, Alice Cooper, who plays King Herod. They’re the most recognizable names in a multicultural cast set to perform the 1971 musical onstage at the Marcy Armory in Brooklyn this weekend.

You could wash down your Easter feast with “American Idol” on ABC, but why?

Did you not read the part about John Legend and Alice Cooper?

Now, it could very well be that most of America’s after-dinner plans involve a viewing option served on DVD or a digital download, which hews to a longstanding American TV tradition that this live event is countering. Easter Sunday used to be the territory of “The Wizard of Oz,” “The Ten Commandments,” or at one time or another “The Sound of Music.”

Cable movie channels and the rise of video on demand largely did away with the movie-of-the-week business, though. Having said that, you can watch Charlton Heston part the Red Sea when “The Ten Commandments” airs on ABC. That starts at 8 p.m. on Saturday; the credits won’t roll until well after midnight. (To this day I have no idea how that movie ends; presumably everything worked out.)

In contrast, “Jesus Christ Superstar Live!” diverges from television’s holiday tradition of genuflecting before Hollywood history and its long-accepted and outdated vision of what religious figures look like. Generations were raised to associate the vision of Moses parting the sea with a white guy from the Midwest. If not that, the recall any of the springtime re-airings of Franco Zeffirelli’s legendary 1977 miniseries “Jesus of Nazareth,” starring a blue-eyed Jesus played by an actor from Manchester, England.

In 2018, however, audiences have embraced “Black Panther” and “Empire;” if there was ever a time to put a black Jesus on broadcast television and not cause every Fox News Channel host to black out due to apoplexy, it’s now. Let’s be honest, somebody over there is going to do that anyway.

But really, Webber’s musical allows NBC to have its bunny cake every way possible. It’s a Christian story, based on events surrounding the final week of Jesus’ life, swathed in a secular presentation. It’s a pop-culture staple; the production itself wasn’t a huge hit when it first launched on Broadway, but its album rose to the top of the Billboard charts in 1971. Productions have been mounted in high schools and community theaters across the country ever since.

Cinematic classics are works encased in amber, comfortable for their familiarity. Whereas “Jesus Christ Superstar Live!,” in the way of the TV musicals that came before it, has an unpredictability about it, making it the perfect experience for social media. Legend’s wife Chrissy Teigen is a behemoth presence in the Twitterverse; surely she’ll be in the seats at the Marcy and find a way to send out pithy tweets.

Yes, there will be people hate-watching and -tweeting their way through the telecast. Anytime actors perform without a safety net there’s a suggestion of danger and an opportunity for the eagle-eyed to keep their eyes peeled for bloopers and gaffes.

Right-wing trolls might have a terrific time with it, of course. Dixon is the “Hamilton” actor who addressed Vice President Mike Pence with a plea for unity following a pre-Inauguration Day Broadway performance. The event outraged the political right and Donald Trump, and inspired a #BoycottHamilton social campaign that obviously worked wonders.

In case you didn’t catch it up top, Dixon is playing Judas to Legend’s Jesus, a role that could allow him to channel a measure of the inner turmoil he poured into his portrayal of Aaron Burr. There’s another bone to pick.

Of course, the naysayers still have those films, or “Idol,” or can opt out entirely. “Jesus Christ Superstar Live!” is happening whether we observe its effect to resurrect live scripted event programming or not. Like other aspects of our cultural shift, it is inevitable. And think of it this way: If it succeeds, someday we may be treated to “Hamilton Live!” on NBC. That will be a long time coming and the smart money dictates it would premiere to coincide with the Fourth of July, where its only cinematic competition is that hoary ’90s-era action film starring Will Smith.