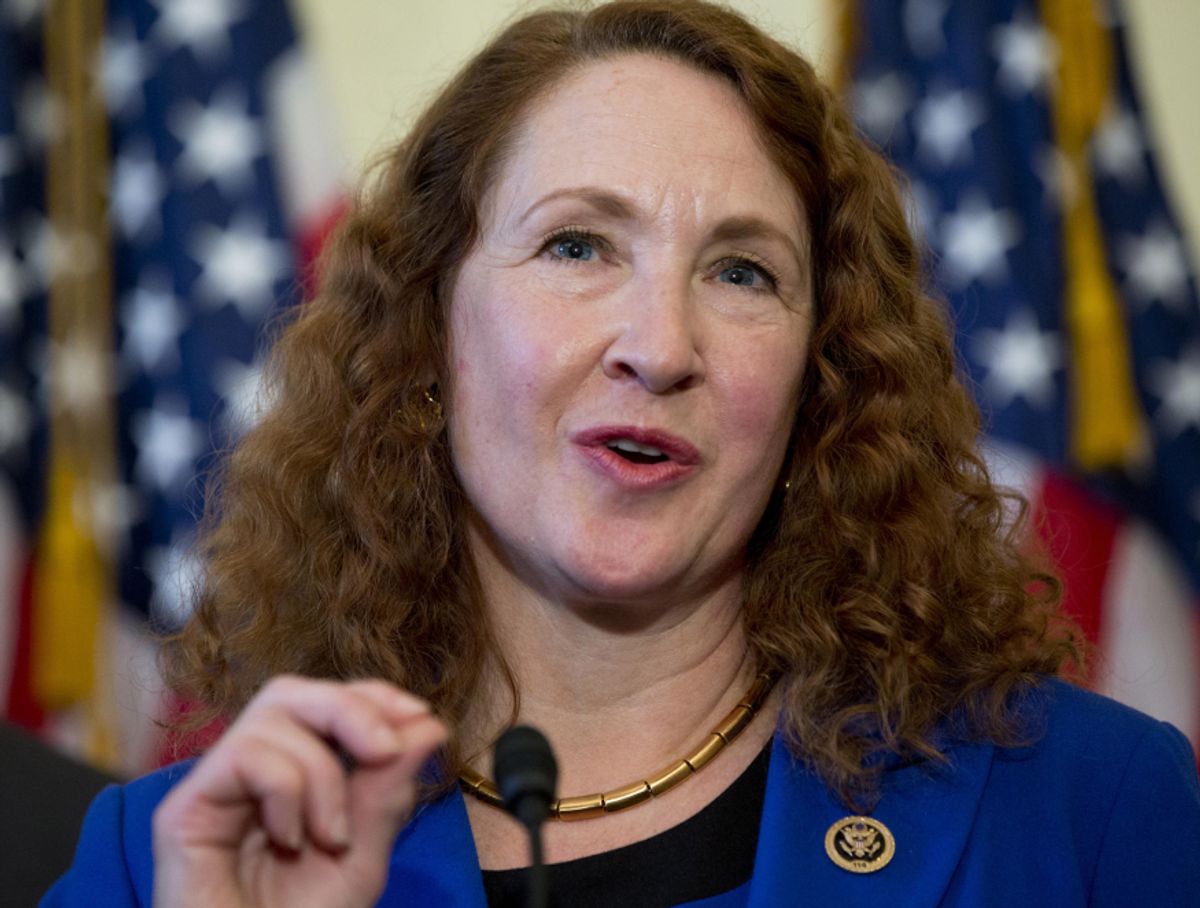 Rep. Elizabeth Esty, D-Conn. speaks on Capitol Hill in Washington, Wednesday, March 4, 2015, about bipartisan legislation on gun safety. Esty was joined by others at the news conference including former Arizona Rep. Gabby Giffords, who returned to Capitol Hill to join forces with advocates of expanded criminal background checks on all commercial firearms sales. The measure is considered a longshot because of opposition by the National Rifle Association. Giffords was shot in the head during a 2011 rampage in Arizona that left six people dead and a dozen others wounded. (AP Photo/Carolyn Kaster) (AP)
--

Congresswoman Elizabeth Esty, a Connecticut Democrat, announced on Monday that she would resign from her post and would not be seeking re-election amid scrutiny for how she handled the departure of her former chief of staff, Tony Baker, who has been accused of violence, death threats and harassment by female staffers in her congressional office.

"It is one of the greatest honors of my life that the people of Connecticut's Fifth District elected me to represent them in Congress," Esty wrote in a Facebook post published Monday evening. "However, I have determined that it is in the best interest of my constituents and my family to end my time in Congress at the end of this year and not seek re-election."

Earlier Monday, Esty asked the House Ethics Committee to conduct an expedited review of her handling of the staffer's departure.

“Although we worked with the House Employment Counsel to investigate and ultimately dismiss this employee for his outrageous behavior with a former staffer, I believe it is important for the House Ethics Committee to conduct its own inquiry into this matter,” Esty said in a letter Monday morning. "In seeking this inquiry, I want to clarify whether there was any wrongdoing on my part,” the statement concluded.

Esty's previous public statements Monday came after The Washington Post revealed last week that her then-chief of staff kept his job for three months in 2016 after he threatened to kill a former colleague, despite the abuse allegations against him being brought to Esty's attention.

She had been considered a champion of the #MeToo movement on Capitol Hill. Before news of her own controversy broke, Esty had issued a press release calling for tougher harassment protections for congressional staffers and was among those calling for Rep. John Conyers of Michigan to step down over allegations of sexual misconduct.

House Minority Leader Nancy Pelosi, D-Calif., endorsed Esty's call for an ethics review and said that the congresswoman's actions had not protected a former staffer in her office. Pelosi did not call on Etsy to resign, however.

"As Congresswoman, Esty has acknowledged, her actions did not protect Ms. Kain and should have. Congresswoman Esty has now appropriately requested an expedited review by the Ethics Committee," Pelosi said in her statement.

Pelosi used the incident to highlight relevant legislation, the Congressional Accountability Act, which would reform Congress's sexual harassment policies but has stalled in the Senate. "Nearly 8 weeks ago, the House passed the bipartisan #MeToo Congress legislation to address the broken Congressional process," Pelosi said. "The Senate is overdue in passing that legislation."

Earlier this week, Esty apologized for how she handled harassment allegations against her former chief of staff, and said she was "inspired by the courage this young woman is demonstrating by speaking up — in the one company town of DC — to say MeToo."

"Too many women have been harmed by harassment in the workplace. In the terrible situation in my office, I could have and should have done better," Esty wrote. "To the survivor, I want to express my strongest apology for letting you down."

In the statement, the congresswoman also called for "stronger workplace protections and to provide employees with a platform to raise concerns, address problems, and work to reduce and eliminate such occurrences."

"In my final months in Congress, I will use my power to fight for action and meaningful change," Etsy said.