By Compiled by Salon News Staff 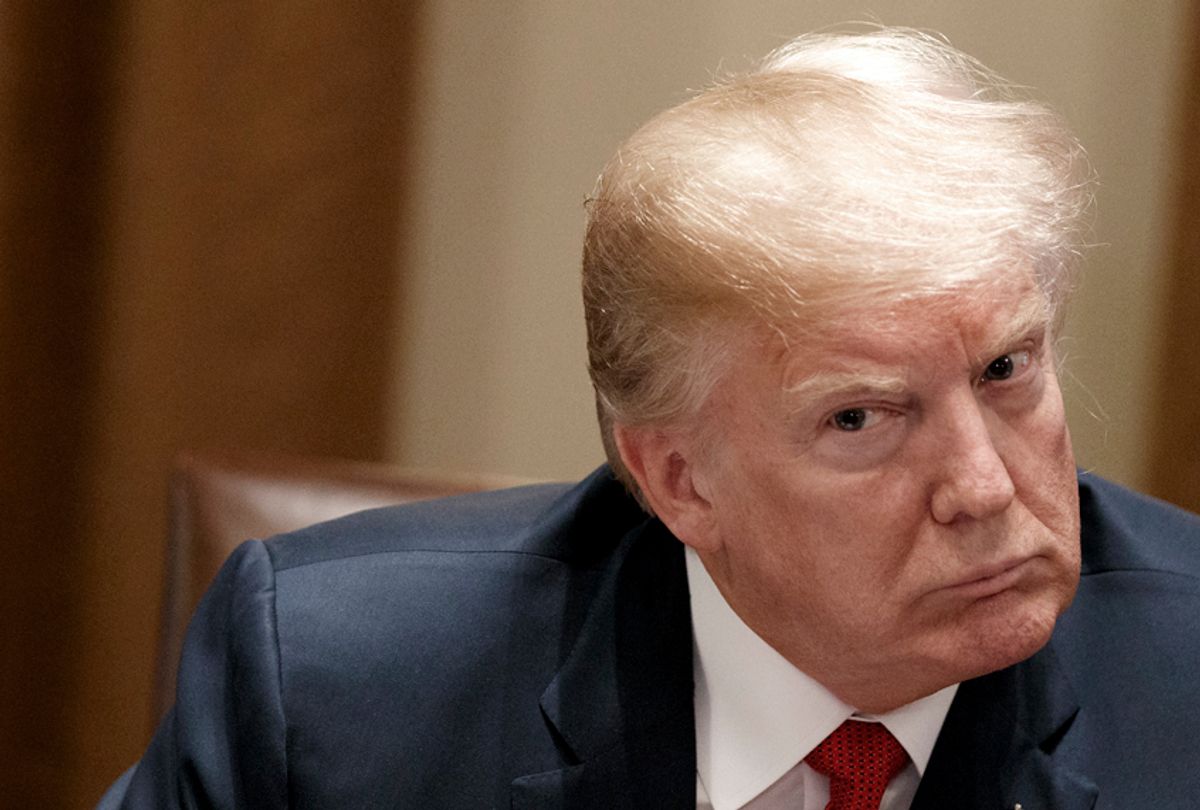 Each day provides us a brand new news cycle, and it's hard to keep up. Here's a short list of the news and notes to keep you informed.

The Kremlin comes to the White House?

In a move sure to raise eyebrows among Democrats, President Donald Trump's critics and even some of his supporters, the Kremlin announced Monday that Russian President Vladimir Putin was invited by Trump to visit the White House. The story was first reported by AFP.

The jokes will likely write themselves over the next few days, but what's more important is that the White House hasn't confirmed the story — and hasn't denied it himself. Here's what press secretary Sarah Huckabee Sanders told the White House press pool:

As the President himself confirmed on March 20, hours after his last call with President Putin, the two had discussed a bilateral meeting in the ‘not-too-distant future’ at a number of potential venues, including the White House. We have nothing further to add at this time.

On Monday, Iowa Gov. Kim Reynolds signed a bill that would allow the state's top insurer to sell "health benefit plans" — which aren't exactly health care plans, at least, not plans that are allowed under the Affordable Care Act.

Iowa's plan will likely succeed, simply because the Trump administration has shown no effort to enforce the provisions of the law, according to the Washington Post.

Democratic candidate: No ads on Sinclair!

With all the news about Sinclair Broadcasting Group's war on the media, aided, in part by President Donald Trump, one candidate is finally taking action.

Amy McGrath, running for a House seat in Kentucky's 6th Congressional District, announced that she wouldn't advertise on the pro-Trump conservative media chain.

Today, I have instructed my campaign team to cease and pull all campaign advertising on WDKY-TV (Channel 56), the Sinclair-owned television station in our congressional district, as soon as possible.

Sinclair's corporate-mandated "must-read" right-wing script on its nearly 200 television stations about "fake news" is itself an extreme danger to our Democracy and eerily mimics the propaganda efforts that authoritarian regimes often use to control the media in their own country.

The nearly 20,000 grassroots donors who have contributed to my campaign should have the expectation that their financial support will never be used to enrich these chilling right-wing efforts to stifle the critical role of local journalism to advance their narrow ideological and political agenda.

I call on all Democratic candidates across the country to take a firm stand against this frightening development to our Democracy and refuse to buy advertising on all Sinclair-owned television stations. Through the power of a boycott, and how we use our supporters' contributions, we can stand up to this threat to our independent media and send a firm message that these actions will not be tolerated in a nation where the freedom of the press is vital.

What is President Trump complaining about today?

DAA. The president seemed to be really riled up Monday, as he did Sunday, reacting to reports (likely on Fox News) that human rights group Pueblo Sin Fronteras (People without Borders) is approaching the U.S. to request asylum.

But what the president didn't note was that this wasn't a one-time event designed to make a statement. It was part of a yearly ritual for people trying to flee turmoil in their own country. Per CNN:

Mensing said the caravan's primary goal is to "flee Central America" and seek asylum either within Mexico or the United States. About four or five different immigration rights groups are working with the asylum seekers, informing and preparing them on their journey to seek refuge.

This is the fifth year the group has done the caravan.

Two caravans were mobilized in 2017 with fewer people and many of their cases have yet to be resolved. Out of the 200 people who marched with the caravan, three have successfully been granted asylum in the US so far, while cases for the others are either in the court system or awaiting decisions.

Here's the president's two-day tweetstorm, interrupted by a trip to the golf course.

Kellyanne Conway is the biggest leaker in the White House

That revelation came from Ronald Kessler, the author of a Trump White House book "The Trump WHite House: Changing the rules of the game." Kessler told CNN's Jake Tapper Sunday that Conway goofed during one conversation, and forgot t go off the record. On the record, Conway said "'mean, cutting and honestly untrue' things about former chief of staff Reince Priebus, and also 'dissed' Ivanka Trump and Jared Kushner, the President's senior advisor and son-in-law."

Steven Bochco, the Emmy-award winning producer who brought "NYPD Blue" and "Hill Street Blues" to the small screen, has died. He was 74. The Hollywood Reporter summarized his life and career, and tributes came pouring in online.

In a since-deleted tweet, Barr wrote: "President Trump has freed so many children held in bondage to pimps all over this world. Hundreds each month. He has broken up trafficking rings in high places everywhere. notice that. I disagree on some things, but give him benefit of doubt-4 now."

CNN seemed to think that it was a connection to a conspiracy theory that Democrats were involved in aiding and/or abetting child sex-trafficking rings, " that Trump is breaking them up and arresting those involved in their operation." There's no proof that is actually happening.

Barr's comment would be surprising to her TV character, who said famously that she voted for Trump (fictitiously) because he was talking about jobs. Not because he was breaking up sex trafficking rings.

After Barr deleted the tweet in question, she tried to play it off the rest of the wekeend by ignoring the topic at hand, and instead offering platitudes.

After nearly two years behind bars, Ethan Couch, nicknamed the "Affluenza teen" because his defense was that his generous upbringing meant that he could not tell right from wrong, was released from jail. Per Reuters:

Couch was 16 and had a blood alcohol level three times the legal limit for an adult when he struck and killed four people in June 2013 with his pickup truck.

At his trial in juvenile court that year, a psychologist testifying on his behalf described Couch as suffering from “affluenza.” The psychologist said it was an affliction brought on by being spoiled by his parents and it had skewed his moral compass.

Couch was sentenced to 10 years of probation for intoxication manslaughter, sparking outrage from critics who ridiculed the affluenza defense and said his family’s wealth had kept him out of jail.

But in late 2015, when a social media video surfaced that showed him in possible violation of his drug-and-drink-free probation, he and his mother, Tonya Couch, fled for Mexico, where the two were later apprehended and deported.

David Shulkin says he was fired, but that's not what the White House says

Fired Veterans Affairs head David Shulkin told "Meet the Press" host Chuck Todd Sunday that he was fired by the White House, despite reports from the Trump administration that the beleaguered secretary had resigned.

Shulkin added that he spoke with the president hours before he was fired, and said the president had set up a meeting with him for the following day.

On Monday, the White House gave an odd explanation about what happened exactly, trying to place the blame on Shulkin for resigning. And, according to the AP, there's a very good reason for that:

Under federal law, a president has wide authority to temporarily fill a federal agency job if someone "dies, resigns, or is otherwise unable to perform the functions and duties of the office." There is no mention of a president having that authority if the person is fired. Still, it's unclear if courts would seek to draw a legal distinction between a firing and a forced resignation, if that is indeed what happened to Shulkin.

Republicans are looking for a way to show disappointment at special counsel Robert Mueller without saying they no longer care about the Russia investigation. The latest gem comes from Sen. Ron Johnson, R-Wisc., who, on "Meet the Press," said that he would have rather the House Intelligence Committee done its job first, and that Mueller was appointed too soon.

“The special counsel was named far too soon. I would’ve much rather had the Senate and House Intelligence Committees complete their report,” he said. “There, there are completely different goals of a special counsel versus congressional oversight. I think, in this case, the most important thing is public disclosure. "That is harmed when you start having special counsels, and all the information is, is gathered and is held close and sometimes never disclosed.”

The House committee essentially found no wrongdoing, while Mueller has already secured a number of indictments and guilty pleas.

By Compiled by Salon News Staff