Circle tightens in the Russia probe: We know the president is under investigation

Trump may wish to celebrate Mueller's statement that he's a "subject," not a "target." He'd be wiser to shut up 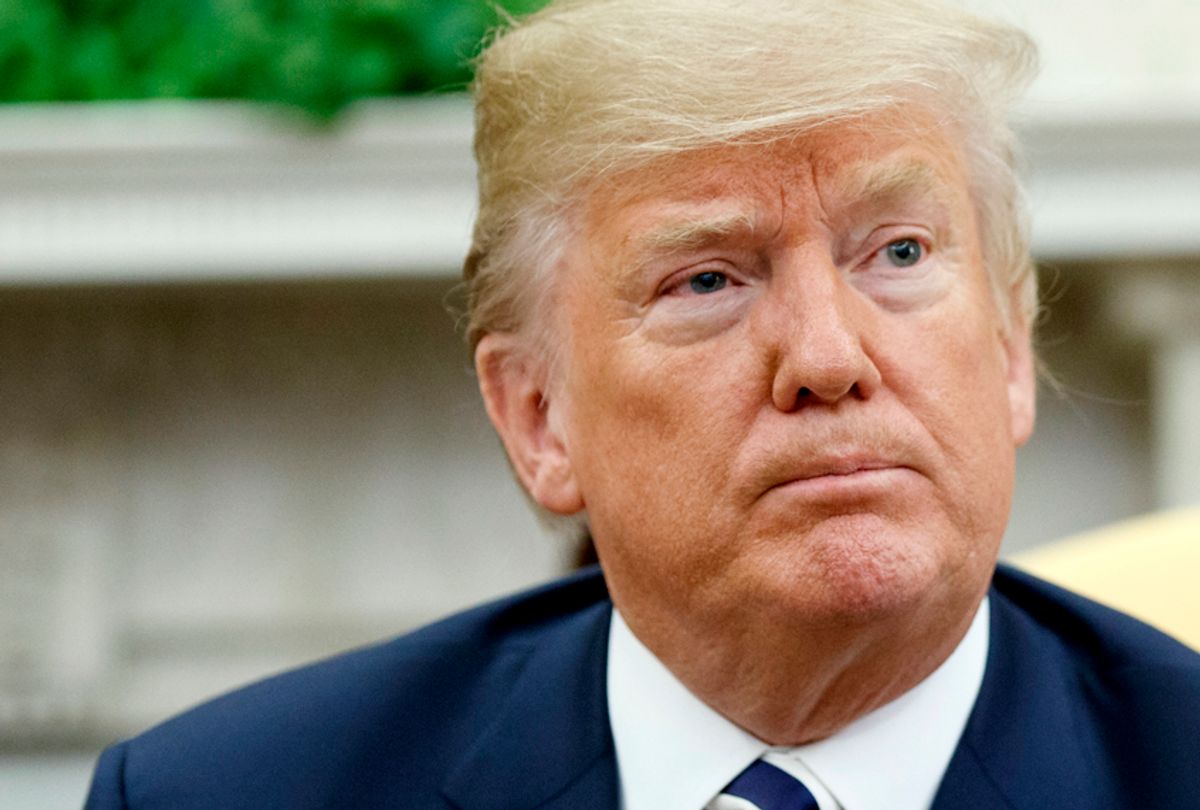 Donald Trump must have awakened on Tuesday, turned on "Fox & Friends" and downed at least three Diet Cokes in quick succession, because his morning tweetstorm was verging on frantic. Of course, he's been tweeting frantically for several days now so perhaps, as the Washington Post's Daniel Drezner speculated, he's "trying to return to his brand as an angry outsider" in order to motivate his base to come out for the 2018 election. Personally, I think Trump is scared to death that his followers are angry that he hasn't fulfilled his promises on immigration. That might explain all this fulminating about "caravans" invading the country and his pledge to send the military to guard the border.

It's also likely that the pressure of the Russia investigation is starting to get to him. "Fox & Friends" does a nice job of keeping the bad news from his followers, but Trump keeps up with the latest real news for obvious reasons. On Tuesday, he learned that special counsel Robert Mueller had filed documents in response to former campaign manager Paul Manafort's claim that Mueller had exceeded his mandate by indicting Manafort for money laundering and other crimes before he joined the Trump campaign. Mueller revealed that a memo last August from Deputy Attorney General Rod Rosenstein, who is overseeing the case, had given him explicit permission to pursue this line of inquiry.

This is the first documented evidence that Rosenstein is behaving as one would expect a career prosecutor to behave and telling Mueller to go where the evidence takes him. Whether Trump understands this is unclear but if he happened to tune in to something other than Fox News he would have heard plenty of experts say that the redactions in the Rosenstein memorandum indicate that there is much more evidence that remains under seal. That couldn't have made the president happy.

Trump made a couple of TV appearances with the leaders of the Baltic countries Estonia, Latvia and Lithuania and took a few questions, which he hasn't done often in recent days. He bragged about his accomplishments, denigrated the press, referred to his former rival as "Crooked Hillary" and forced the foreign leaders to sing his praises, much as he has occasionally done with his cabinet members.

They were gracious. He was not. Complaining about NATO being a bunch of deadbeats until he came along and extorted more money out of them is a particularly crude thing to say to leaders of NATO nations who are wholly reliant on the organization for their security. Worse yet, he kept repeating that "no one has been as hard on Russia as I have" to people who are well aware of what he has and hasn't done. In fact, his repetition of that mantra sounded very much like a man protesting too much:

We’ve been very tough on Russia, frankly. But I will say that if we got along with Russia, that would be a good thing, not a bad thing.  It’s possible we won’t. We’re going to find out whether or not we do. But if we could all get along, that would be great. And that includes China, and that includes many other countries. But we’ll see what happens. Only time will tell. But nobody has been tougher on Russia. But getting along with Russia would be a good thing, not a bad thing. And just about everybody agrees to that, except very stupid people. OK.

Later at the formal press conference he repeated this again. And again. On each occasion he asserted his toughness on Russia and then added that he wants to have good relations. He never said one word about President Vladimir Putin. It was left to his guests to state the obvious, as President Dalia Grybauskaite of Lithuania did when Trump ignored a question about the threat Russia poses to the Baltic states and instead babbled on incoherently about trade.

Those countries have direct experience of what it means to have friendly relations with Russia. They also know what it means to have not-so-friendly relations. All three Baltic countries have KGB museums in their capital cities where they memorialize the torture, persecution and imprisonment perpetrated by the Soviet secret police during their decades behind the Iron Curtain. You can be sure that these three leaders, unlike Donald Trump, are very well aware of Vladimir Putin's training and career as a KGB officer. "Stupid people" they are not.

Trump's agitation likely eased a bit on Tuesday evening when the Washington Post published a story reporting that as of a month ago Mueller didn't consider the president a target of a criminal investigation but rather a subject. Apparently, the distinction has some bearing on whether he would be wise to volunteer for an interview with the prosecutors. A target would be foolish to do so, while a subject might have less to worry about. Of course, a subject can turn into a target the minute he either incriminates himself or lies to the prosecutor, both of which are highly conceivable with this undisciplined braggart. (Perhaps Mueller and his team are subtly trolling the president with this leak, hoping to get him to agree to a interview.)

Needless to say, Fox News is reporting this as if Trump has been fully exonerated, and I would not be surprised if he tweets out that he's free at last. He would be well advised to be cautious. As CNN's Jeffrey Toobin said on Tuesday night:

Indeed. The president of the United States being the subject of a counter-intelligence investigation is about the biggest deal there is. But this is Donald Trump we're talking about: Scandal, corruption, dysfunction and failure follow him wherever he goes. His true talent is simple survival and he has unwavering faith that he will prevail. He always has before.