Don't let fascism go "unnoticed until it's too late" 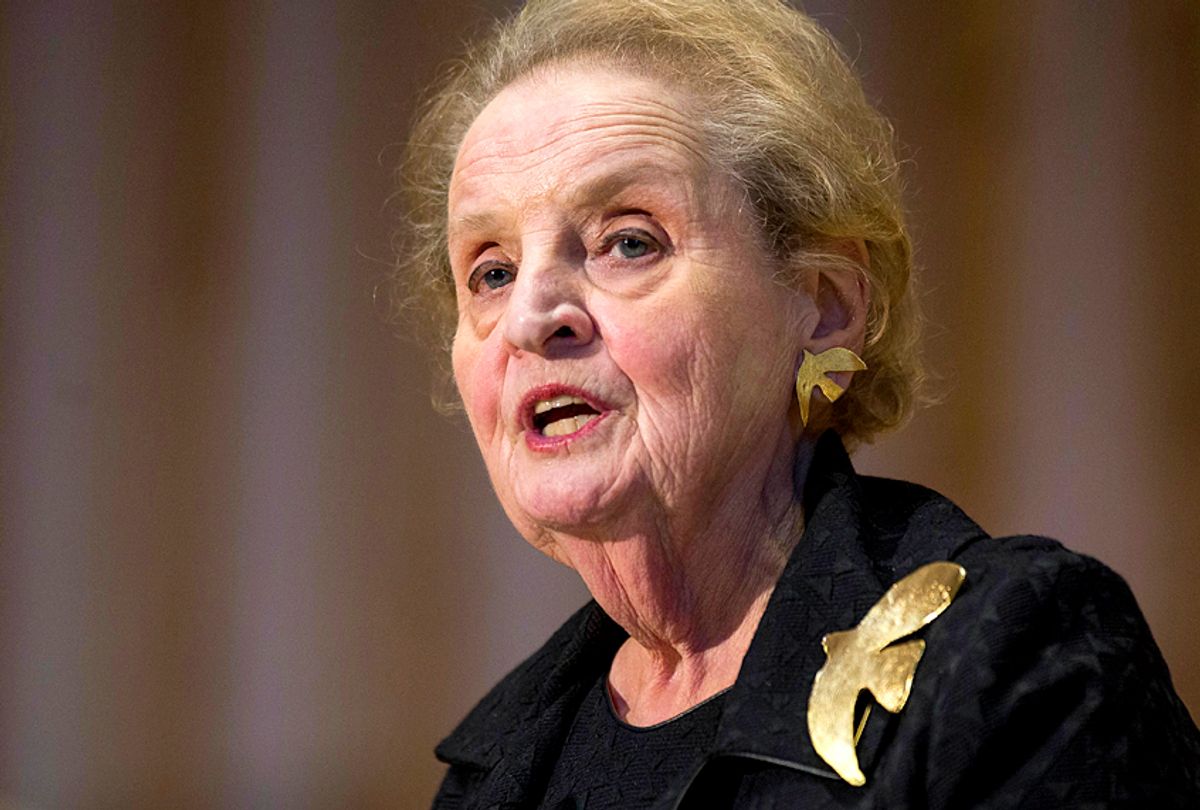 For Madeleine Albright, fascism is personal.

The former Secretary of State fled authoritative leaders twice in life, first leaving Czechoslovakia with her family after the Nazi occupation in 1939. Later, she left Czechoslovakia for a second time during the rise of Communism. Now, she hopes to not have to flee fascism for the third time.

Perhaps that’s what motivated Albright to write her latest book, “Fascism: A Warning,” where she describes how authoritative leaders like Adolf Hitler rose to power, and examines how more modern democratic countries are turning to fascism today.

In an interview with National Public Radio’s Terry Gross for an episode of “Fresh Air,” Albright said she’s concerned about America’s democratic values under the leadership of President Donald Trump. While she doesn’t call him a fascist, she does refer to him as the “most anti-democratic leader we’ve had in modern history.”

“What he's trying to do is undermine the press and [he] has disdain for the judiciary, and the electoral process and minorities, and I think that his instincts are not ones that are democratic,” Albright told Gross. “I am very concerned.”

Albright explained that the build-up of fascism can be a slow one.

“Part of the reason for writing [the book] is to say that, in fact, this can happen in countries that have democratic systems, that have a population that's interested in what's going on, that is supportive,” she said. “That's what's so worrisome, is that fascism can come in a way that it is one step at a time, and in many ways, goes unnoticed until it's too late.”

Her solution is that people need to speak up and do something.

Gross asked Albright about her thoughts on how Trump has a habit of saying and tweeting things that aren’t true. She pointed to a Trump tweet from this past weekend, when he said, “These big flows of people are all trying to take advantage of DACA. They want in on the act!” Trump was referring to a reported caravan of refugees from Honduras, crossing the border in Mexico.

As Gross pointed out, it would be impossible for those people to “take advantage of DACA” since it’s not 2007.

“What are your concerns when the President tweets or says something that isn’t just not true, but a lot of people hear or read him won’t know that?” Gross asked Albright.

“I have to say on the whole issue of DACA he has so many things wrong that I wonder whether he’s deliberately lying or whether he really doesn’t understand the issue,” Albright said.

Albright continued to explain how Trump is often quick to blame Democrats for DACA, to which she added this is the type of issue America should be worried about.

“I think people may disagree with the president of the opposing party ... but we normally have believed that the president tells the truth,” Albright said. “And I know I'm very worried about the fact that there are deliberate ways of misstating the issue, and then the people think, ‘If the president said it, it must be right,’ when it's just a deliberate untruth.”

Further dissecting some of Trump’s policies and rhetoric, when asked about NATO and Trump’s criticism of it, Albright said it’s an “unbelievable step backwards.”

“I do believe that the United States is stronger when we have friends and allies to deal with the various issues,” she said. “As a European who has spent her life in the United States, I see the Euro-Atlantic alliance as one of the most important bulwarks of our society, so seeing this go on, I find appalling. And what is the issue — again, it's this lack of understanding of what this alliance is about.”

Albright’s warning and concerns are ones to be taken seriously, especially when separate analyses have suggested democracy is on the decline, too.

Indeed, data analyzed by Freedom House in January, a US-based think-tank suggested that democracy has faced its “most serious crisis in decades.” The report claimed various factors are at fault for democracy's global decline, but it called out Trump’s rhetoric and policies, noting how they don’t position him as an advocate of democracy.