James Earl Ray stole his life. The flattening of King's work is theft, too — this time of his intellectual labor 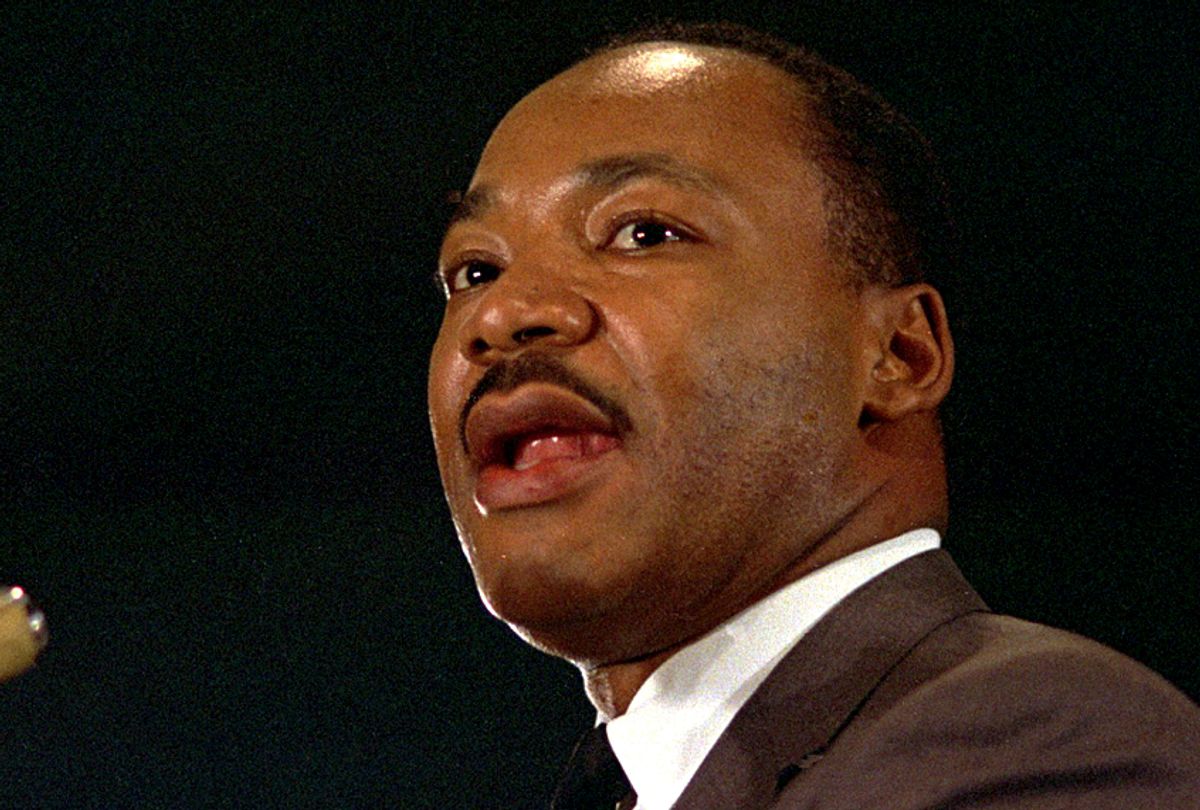 Rev. Dr. Martin Luther King Jr., perhaps the most famous American who was counted among the Christian Left. (AP)
--

It has been 50 years since Rev. Dr. Martin Luther King, Jr. was shot as he stood on the balcony outside room 306 of the Lorraine Motel in Memphis, Tenn. He had traveled there to support sanitation workers on strike after years of mistreatment and poor wages. King was just 39 years old.

As the founding president of the Southern Christian Leadership Conference and a Nobel laureate, King was certainly famous in his lifetime. But since his assassination, King's persona has become a phenomenon. He is remembered as the greatest civil rights leader in history and in many mainstream and liberal circles for his philosophy of nonviolence.

Politicians across the aisle feel at ease quoting King, most especially to advocate for blind love disguised as inaction — a dangerous misinterpretation of King's work and legacy. Not only was King deeply radical in his fight against both racial and economic injustice, but he was far from passive. And, in line with the way America treats black activists, he was surveilled, targeted and harassed, accordingly.

Further, the sweeping reverence for King now, is a shift from when he was alive — certainly a byproduct of his vision being both sanitized and whitewashed. In August 1966, during the final years of his life, King had an approval rating of 33 percent, according to Gallup. Forty-five years later, that rating had risen to be 94 percent positive.

Of course, King should be widely celebrated. But just as James Earl Ray stole his life, the flattening of King's work and perspective is theft, too — this time of his intellectual property and labor. As Jesse Jackson recently wrote in the New York Times, "We owe it to Dr. King — and to our children and grandchildren — to commemorate the man in full: a radical, ecumenical, antiwar, pro-immigrant and scholarly champion of the poor who spent much more time marching and going to jail for liberation and justice than he ever spent dreaming about it."

Ending de jure segregation in the Jim Crow-era South was just one part of his activism. Toward the end of his life, "King was exceedingly unpopular in the U.S. because of his focus on fighting poverty, standing against militarism, empowering working-class people and the poor, and struggling against housing segregation in Northern cities," Salon's Chauncey DeVega writes. "The radical King — as opposed to the sanitized and literally whitewashed public figure who is celebrated during Black History Month and embraced on his public holiday — was a radical leftist who strongly opposed the excesses of capitalism and suspected that White America could not be rehabilitated from its racism."

And years before his assassination, King was wary of the stance of white moderates in the north, who supported civil rights as long as it didn't interrupt their own lives and as long as the methods to seek equal rights were not too inconvenient or disorderly and legal — no matter how unjust the laws on the books continued to be.

In his 1963 "Letter from Birmingham Jail," King wrote:

I have almost reached the regrettable conclusion that the Negro’s great stumbling block in his stride toward freedom is not the White Citizens’ Counciler or the Ku Klux Klanner, but the white moderate, who is more devoted to 'order' than to justice; who prefers a negative peace which is the absence of tension to a positive peace which is the presence of justice; who constantly says: 'I agree with you in the goal you seek, but I cannot agree with your methods of direct action'; who paternalistically believes he can set the timetable for another man’s freedom; who lives by a mythical concept of time and who constantly advises the Negro to wait for a 'more convenient season.' Shallow understanding from people of good will is more frustrating than absolute misunderstanding from people of ill will. Lukewarm acceptance is much more bewildering than outright rejection.

This is the same letter oft-quoted today by the very people whom King describes above. "Injustice anywhere is a threat to justice everywhere," he wrote in the fourth paragraph of a nearly 7,000 word letter, which is now one of his most iconic and exhausted phrases. (The sheer contradiction of those who chide young activists in the Black Lives Matter movement for blocking highways while plucking and sharing out-of-context King quotes is truly remarkable.) In this same letter, King amended his approach as "nonviolent direct action."

As King neared the end of his life, he focused on his opposition to the Vietnam War and tackling the widening gap between the rich and poor. "This project gradually took the form not of simply a march but of the extensive Poor People’s Campaign and mobilization to culminate in an encampment in the shadow of the Washington Memorial," William Pepper wrote in "The Plot to Kill King." "The projection was for the establishment of a tent city with five hundred thousand of the nation’s poorest and most alienated citizens. They would remain as long as it took to get action from the Congress." The campaign was scheduled for the spring of 1968, but King would not live to see it.

As the decades mount from King's assassination and the people who knew him intimately get older, it is more important than ever to return to his writings in full to combat the distortion of his words and life. A misremembering of his legacy is a grave disservice to his radical commitment to freedom and equality — an agenda he was murdered for.

Fifty years from his death, King's vision continues to be relevant, as the wealth gap is greater than ever, schools remain largely segregated and unequal and the criminal system justice sinks its teeth into black and brown communities.

In King's final speech, on April 3 in Memphis, Tenn., he said: "Something is happening in our world. The masses of people are rising up. And wherever they are assembled today, whether they are in Johannesburg, South Africa; Nairobi, Kenya; Accra, Ghana; New York City; Atlanta, Georgia; Jackson, Mississippi; or Memphis, Tennessee — the cry is always the same: 'We want to be free.'"