Trump: "We are preparing for the military to secure our border"

The president claims he is gearing up to order the U.S. military to police parts of the Mexican-American border 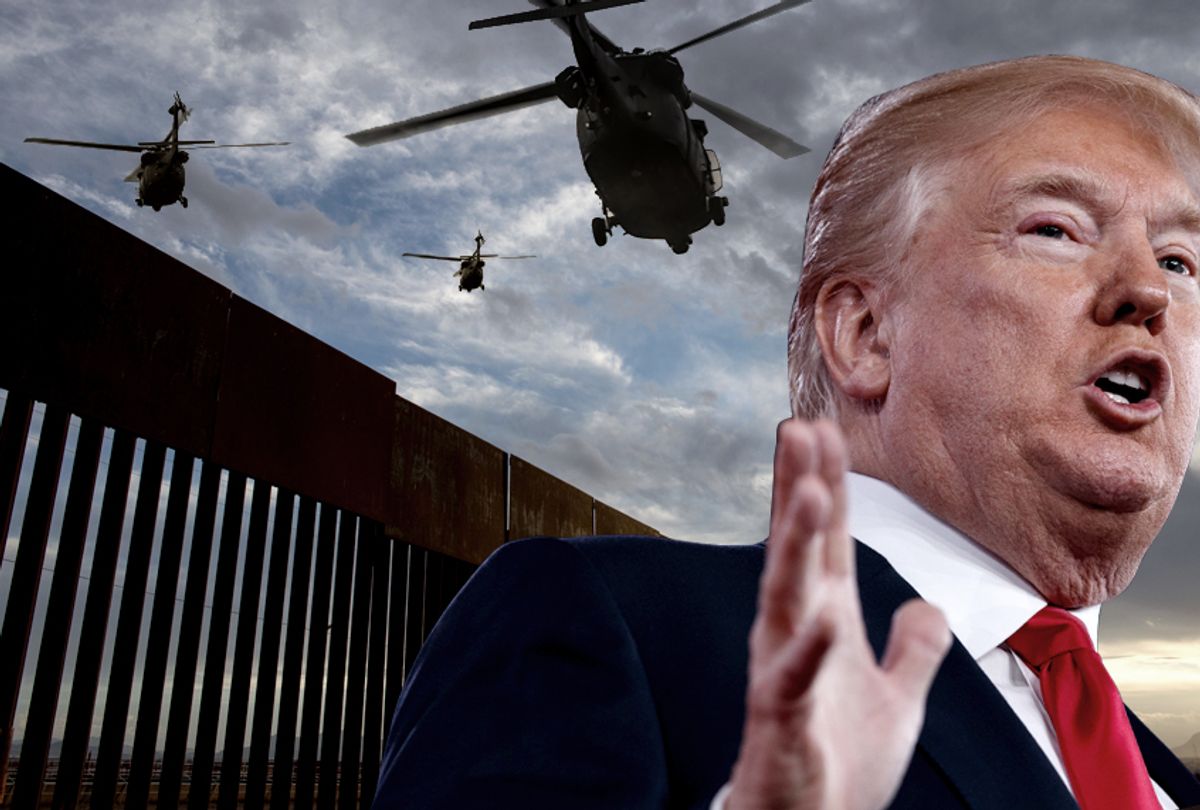 A section of the US/Mexico border fence. (Getty/AP/Photo Montage by Salon)
--

President Donald Trump said on Tuesday that he is gearing up to order the U.S. military to police parts of the Mexican-American border. The president's remarks intensified his recent rant regarding his desperate desire to see through his campaign promise to tighten border security.

“We have very bad laws for our border, and we are going to be doing some things. I’ve been speaking with General Mattis. We’re going to be doing things militarily,” Trump said at the White House, during a meeting with visiting Baltic leaders. “Until we can have a wall and proper security, we’re going to be guarding our border with the military. That’s a big step. We really haven’t done that before — or certainly not very much before.”

Trump reportedly reiterated to reporters on Tuesday: “We are preparing for the military to secure our border between Mexico and the United States. I think it’s something we have to do."

During the last couple of days, Trump has actively blustered about the need for stricter border control on Twitter, citing an increased urgency after hearing that a group of migrants from Honduras were traveling through Mexico. The story had been reported by his media outlet of choice, Fox News.

Mexican government authorities intervened and have agreed to provide humanitarian visas to some of the 1,200 migrants who were reportedly part of the "caravan," including infants and elderly individuals, according to the New York Times. The caravan is an annual event intended to draw attention to the growing refugee crisis in Central America, the Washington Post reported.

This would not be the first time that troops have been deployed to the border. In 2010, then President Barack Obama’s administration sent 1,200 National Guardsmen to support Homeland Security's CBP and ICE amid heightened concerns about drug trafficking.

Advocacy groups highlighted how such patrol is harmful to border communities on social media.

Trump's latest remarks appear to be another attempt for the president to deliver to his base. Indeed, last week, Trump reportedly suggested in a private meeting with House Speaker Paul Ryan that funding for the construction of the border wall could come from the U.S. military budget, according to CNN. Reports of that plan were met with derision from both sides of the aisle.

"First Mexico was supposed to pay for it, then U.S. taxpayers and now our men and women in uniform? This would be a blatant misuse of military funds and tied up in court for years. Secretary Mattis ought not bother and instead use the money to help our troops rather than advance the president’s political fantasies," Senate Minority Leader Chuck Schumer , D-N.Y., said in a statement.