Al Pacino brings the Penn State coach to life in "Paterno," a painfully appropriate film for our era

Penn State fans may not like "Paterno," but that's precisely why they should see it 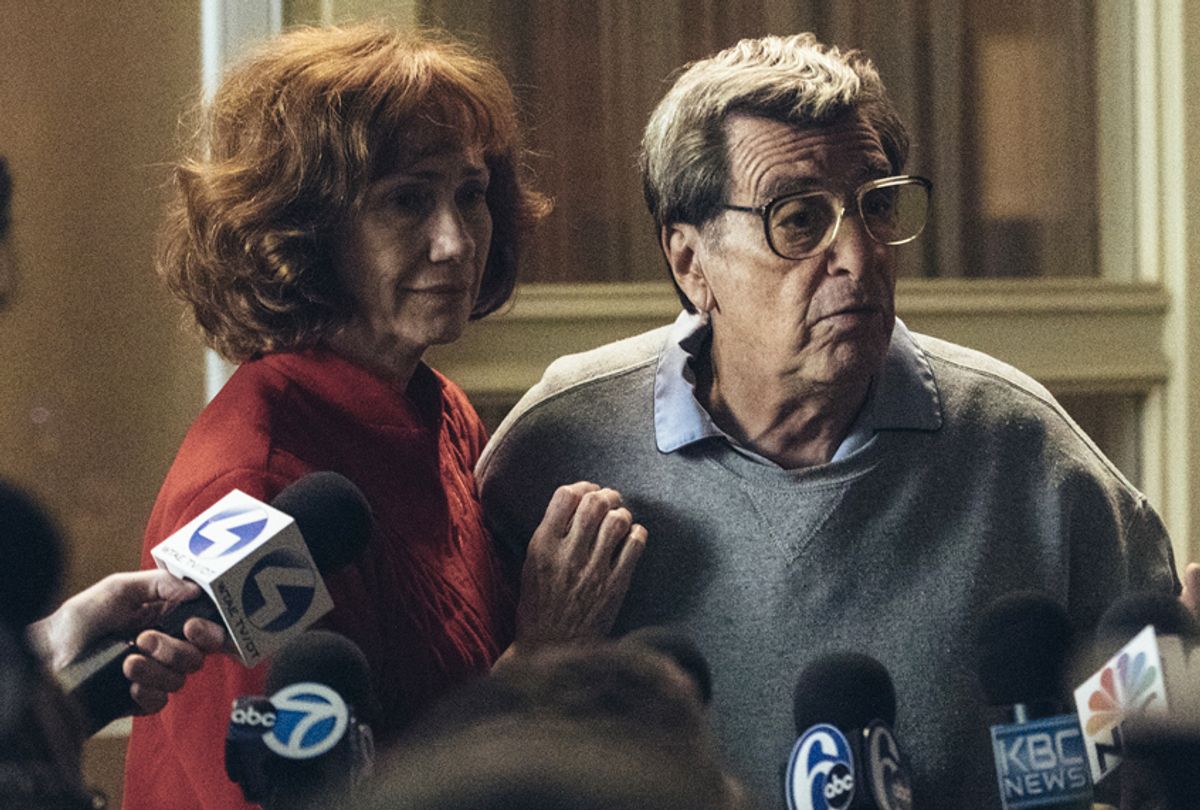 Near the end of "Paterno," one character chides another for asking about how the alleged cover up of Jerry Sandusky's pedophilic predations will impact the legacy of Penn State's iconic head coach, Joe Paterno. The man dismisses the question as "spectacularly unworthy of conversation" — a noble enough sentiment, given the countless children whose lives were ruined by Sandusky, but also a tad disingenuous coming from the filmmakers. After all, if the question of Paterno's legacy is spectacularly unworthy of conversation, then why did HBO make a movie that justifies its existence by stirring up talk about precisely that topic?

While I can't answer that question for the filmmakers, I can say that "Paterno" is one of the quintessential movies of the 2010s. It tells a tale that has become depressingly familiar in this decade: A revered celebrity is revealed to have done something unconscionable that not only changes our opinion of him or her, but ultimately destroys their reputation. It is easy to think of this in the context of The Weinstein Effect, but the Paterno scandal didn't simply precede the post-Weinstein allegations by more than half a decade. It also destroyed a man who had been a central figure in Pennsylvania's culture for half a century, so much so that even people in the state who don't follow college football were familiar with (and usually had at least a casual respect for) both the man and what he represented.

Of course, you can't separate the reverence for Paterno from the obsessive football culture that made it possible — one that has recently reached a new fever pitch in Pennsylvania due to the Philadelphia Eagles' Super Bowl victory — and the film establishes that fact right away. In the first ten minutes, it shows the titular Penn State football coach (not so much played by Al Pacino as resurrected by him) intensely focused on winning his 409th game, the most for any head coach in college football history. As we're being entertained by the drama and athleticism on the field, however, powerful men are quietly panicking about a crisis that threatens their impending glory right down to its moral foundations. Paterno himself remains oblivious to it all, though, his advanced age having already eroded some of his mental acuity while his longstanding calcification against factors that might distract him from his work does the rest.

The opening sequence captures the themes that dominate the rest of the story, both the one on screen and that which unfolded in real life. As it became increasingly difficult to avoid the conclusion that Paterno knew about at least some of what Sandusky had done and conspired to cover it up, people who had once held him in high regard began to grapple with the grief of losing an idol. Some reacted with anger, demanding that he resign; others with profound disappointment and heartbreak, including (at least according to the film) his own children; and still others blamed the victims, from the bullies who tormented one of Sandusky's accusers to the Penn State rioters who overturned a news van in rage upon learning that Paterno had been fired.

While "Paterno" chooses to focus on the Paterno family's response to the unfolding public scandal, the movie's beating heart is revealed when it profiles a community's reaction to the moral flaws of a man it once held up as a hero. Their reaction calls to mind a quote by President Bill Clinton about his father-in-law Hugh Rodham, one that (appropriately enough) I gleaned from a book I found at a Pennsylvania garage sale called "Quotable Joe: Words of Wisdom by and about Joe Paterno, College Football's Coaching Icon":

"Until his dying day, he thought if there was a perfect person on Earth, his name was Joe Paterno."

There are a lot of "perfect people" out there who wind up being exposed as not only imperfect (which is universal and thus forgivable), but deeply morally compromised. Moreover, there are many fans of those "perfect people" who refuse to accept the full truth once it has been exposed. I personally know quite a few individuals who refuse to realize that Al Franken engaged in sexual misconduct, that Bill Cosby was a rapist and that Kevin Spacey didn't "just do one thing many years ago." Similarly, there are many people Penn State alums — people who I've known for years and respect — who are reluctant to let go of the unassailable living deity he used to be.

"As a Penn State graduate, I feel the focus of this film is misguided, in that it should concentrate on the strength and resilience of the Penn State Community in the wake of the Sandusky scandal, and not Joe Paterno," Jessica told Salon. "Coach Paterno did incredible things for Penn State, its students and the community, all of which are now overshadowed by this scandal."

Her thoughts were echoed by Sal.

"As far as JoePa’s overall legacy, the man was so much more than a football coach. As someone who went to Penn State and worked for the university for 8 years I saw first hand how much good he and his whole family did; how much they gave back to the community. I don’t think this should tarnish his legacy forever or ruin or negate all the good he did," Sal told Salon.

She added, "I’m a diehard fan, but I’m also not blind. I’m not one of the people who will tell you he did nothing wrong and he’s completely innocent. I do think he could have and should have done more, and I think, looking back on it all those years later, he realized that too. But I also truly believe that at the time, he thought he did exactly what he was supposed to do. I don’t believe he was maliciously trying to cover anything up. I think, at the time, he really believed he did the right thing by reporting it to his superiors and trusting them to take over the investigation and see it through."

These are the people who most need to see "Paterno," even though they're the ones least likely to agree with its thesis. It is a movie that I would recommend to just about anyone who is interested in how celebrities try to preserve their good names after past misdeeds are brought to light, or who simply enjoy great acting (again, all props go to Al Pacino here). The film is not without its flaws — the pacing lags at times and some of the more interesting subplots are buried under scenes that repetitively show the Paterno clan trying, and failing, to put out the fire — but it hits home not only because the crimes it profiles are so heinous, so unconscionable, but because the entire subject is so agonizingly relevant today.

Here is the underlying problem that we have to grapple with as a culture: The people who we think of as our heroes often have aspects to their character which we cannot condone as a civilized people. They are broken idols, individuals who loom too large in their respective fields to be simply forgotten or written off, and yet whose legacies have still been forever ruined. Our society is searching for a way to figure out what to make of these people, but no obvious answers are apparent. The best thing we can do, right now, is insist that the whole truth be accepted no matter how heartbreaking, and accept that virtue and success are not always one and the same.

Or as Paterno put it, which I know from that garage sale acquisition:

"Success without honor is an unseasoned dish; it will satisfy your hunger, but it won't taste good."