Voters in Tempe overwhelmingly demanded a campaign disclosure law. GOP legislators found a way to shut it down 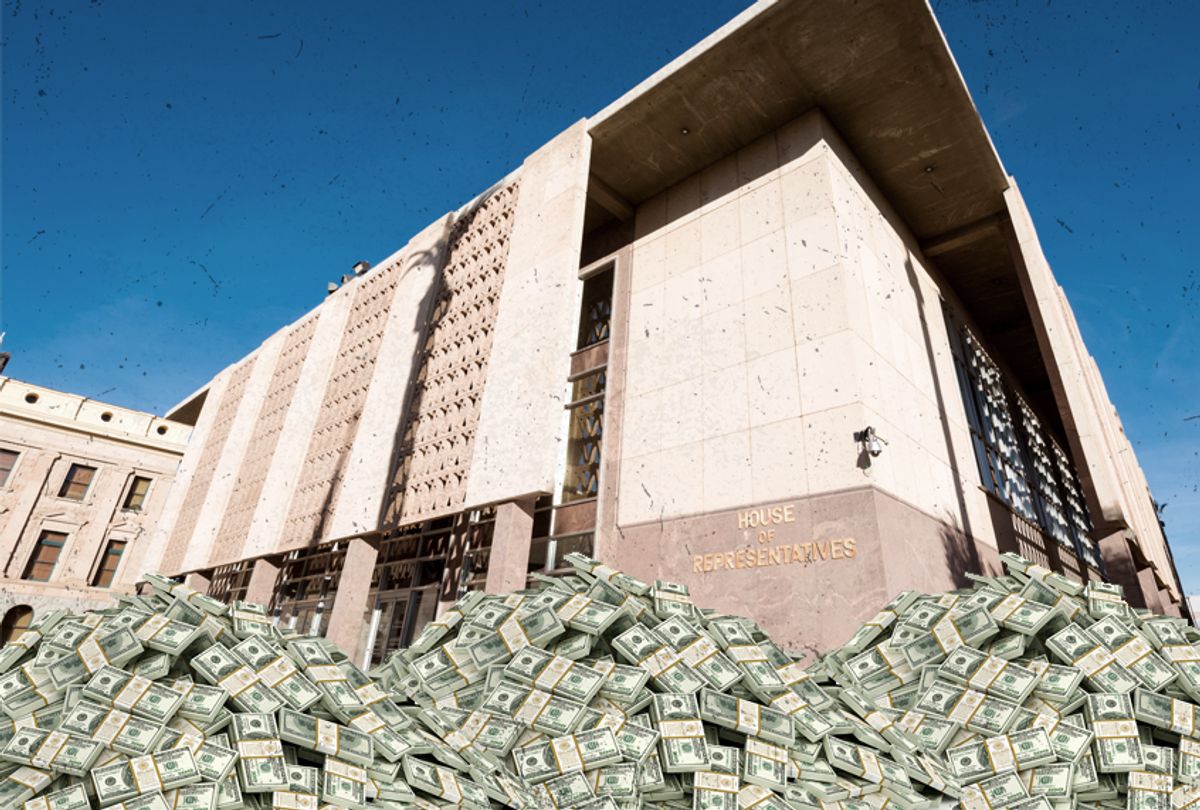 American cities have become increasingly liberal, while the Republican Party controls most state governments. In an effort to keep blue cities from passing local ordinances reflecting their values, Republicans legislators in state capitals have embraced pre-emption laws, preventing city governments from enacting all kinds of things: Protecting their residents from discrimination, for instance, or increasing the minimum wage.

Now Republicans in the Arizona state legislature are using that power to protect the flow of dark money — cash spent on campaigns from secret donors — into state and local elections. It turns out some powerful national interests are involved in making sure that local communities don't know who is spending money to influence their elections.

Last month, the city of Tempe, the home of Arizona State University and long a liberal bastion, passed a ballot initiative -- supported by 91 percent of voters -- that would require any group spending more than $1,000 on a local election to disclose its donors. (Nearby Phoenix is considering a similar bill.) In a swift and startling response, both houses of the state legislature passed HB 2153, which forbids Tempe or any other cities that pass such laws from enforcing them. Gov. Doug Ducey, a Republican and a major beneficiary of generous dark money spending, is expected to sign the bill soon.

“When you have a party that’s becoming more reliant on this handful of secretive special interest donors, you see them reacting to protect where their money’s coming from," Adam Bozzi, the communications director for End Citizens United, told Salon.

“In Arizona, in the last couple election cycles in particular, we’ve seen a huge increase in the amount of dark money, or money that’s not disclosed at all where it’s coming from, being spent in our elections," said Joel Edman, the executive director of the Arizona Advocacy Network. "That really started at a statewide level, but it certainly has started to trickle down to local levels."

In a 2016 report titled "Secret Spending in the States," the Brennan Center looked at the way Citizens United and other court decisions loosening campaign finance laws have drastically increased this disclosure-free outside spending. Arizona was by far the worst state observed during the 2014 election cycle, with more than $10 million in dark money spent that year alone.

"In my 33 years in Arizona politics and government, dark money is the most corrupting influence I have seen," Chris Hestam, a lobbyist who used  to be the Republican whip in the state House of Representatives, told the Brennan Center.

The 2014 election for the Arizona public utilities commission is a startling illustration of how out of control the problem has become. Arizona Public Service, a corporate energy company, is widely believed to have used shell organizations to spend more than $3 million to elect its preferred candidates. The investment paid off nicely, as the dark money-backed commissioners raised utility rates, netting the company $95 million a year, nearly a $32 return for every dollar spent on the election.

One conservative group, the Arizona Free Enterprise Club, saw its spending balloon from from $185,000 in 2012 to $1.1 million on state races in 2014. Clearly, a lot of people with a lot of money are feeling freer to influence elections, as long as their identities stay hidden — at least from the voters. Politicians, Edman suggested, tend to have a pretty good idea where the money is coming from.

“For that reason, we’re going to see a lot more of this sort of thing happening at the city level," Edman said. “At the national level, you can spend $10 million on an ad campaign and make no difference at all," but a secret donor can buy a lot more influence for less money, he said, "especially as local media continues to erode," and advertising makes up an ever-larger proportion of the information voters get about local races.

Arizona isn't the only state that is seeing what might seem like relatively insignificant local or state races turn into big money spend-a-thons. In 2015, a school board race in a Denver suburb saw campaign spending top $1 million, as the Koch brothers-founded organization Americans for Prosperity spent hundreds of thousands to elect candidates hostile to teachers unions. During his 2016 gubernatorial race in Missouri, Eric Greitens received nearly $2 million in a single dark-money donation, despite having vowed to turn away such secretive donors.

(Greitens won the election, but has since been arrested and charged with a crime, after a woman with whom he had an affair alleged that he tied her up naked and took photos of her in an apparent blackmail attempt.)

The Arizona bill appears based on model legislation drafted by the American Legislative Exchange Council (ALEC), a conservative pressure group backed by the Koch brothers that is devoted to making it easier for wealthy special interests to dump alarming amounts of money into political campaigns. In other words, dark-money donors help elect Republicans and then, once those Republicans are in office, those same donors write legislation protecting dark money, which their purchased politicians cheerfully pass.

Salon reached out to Rep. Vince Leach, the Arizona state representative who introduced the bill and is also running for state Senate this year. Leach is also a member of ALEC. He did not respond to a request to explain the importance of this legislation, which passed with unanimous Republican support in the state Senate and only one Republican dissenter in the state House. (All Democrats in both houses opposed.)

"Lots of people in my district want the right to remain anonymous and that's who I'm here to represent," Leach told AZ Central when asked about the bill.

It's certainly disheartening for activists and advocates to see Republicans stomp on the will of voters who want better disclosure laws, both Bozzi and Edman believe it's important for local governments to keep passing these laws anyway. For one thing, Edman argued, Tempe and similar cities may ultimately win the lawsuits that will inevitably arise from these laws.

More importantly, Bozzi said, when voters pass initiatives like the one in Tempe, "it also demonstrates that the American people want this." Ensuing legislative battles help raise the profile of the issue, and inadvertently serve to educate voters even more about how much dark money is being spent on trying to influence them. All this may also raise the pressure at the state and federal level for real campaign finance reform, which should become a real priority for Democrats if and when they regain power in state capitals and in Washington.