Gaza’s nonviolent protesters exploited by Hamas, but feared by Israel

Palestinians have a long history of nonviolent protests 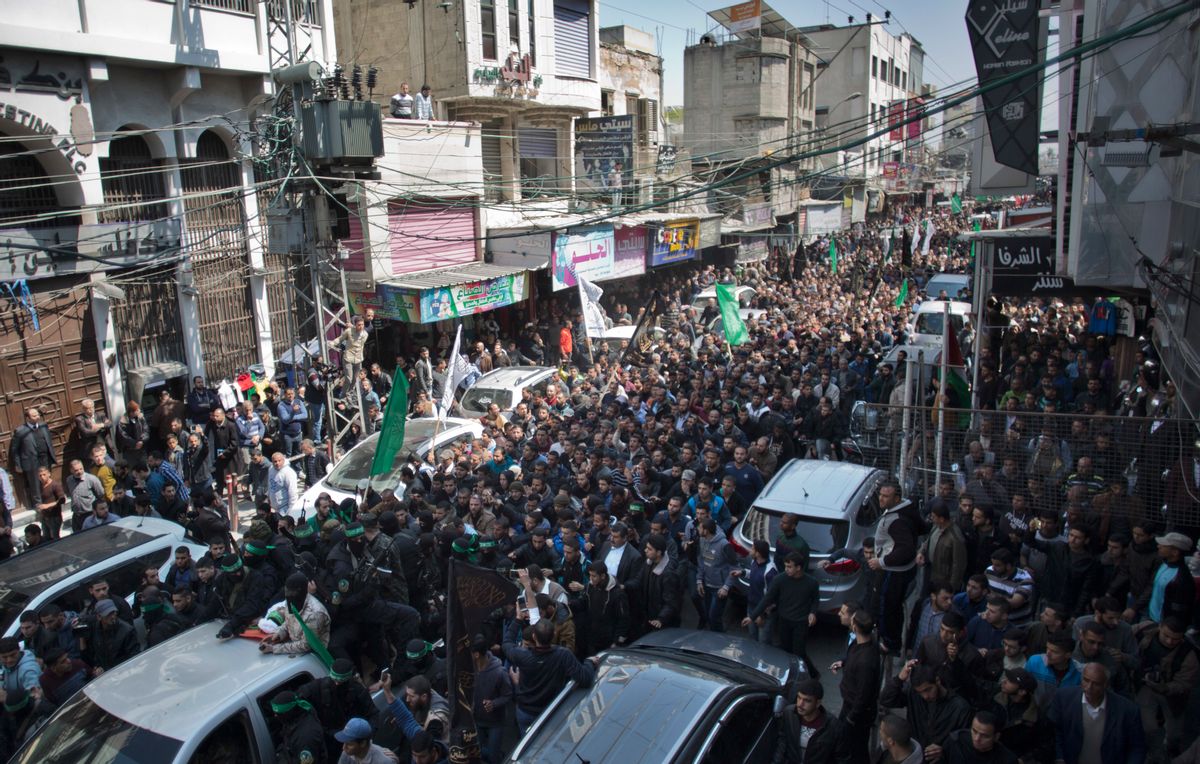 Last Friday was an important day for Christians and Jews around the world. For Christians, it was Good Friday, the day that commemorates the crucifixion of Jesus; and for Jews, it was the beginning of the Passover holiday, which commemorates their liberation from slavery and exodus from Egypt.

Friday was also an important commemoration for Palestinians, called “Land Day.” It marks the date in 1976, when six Palestinian citizens of Israel were killed by Israeli security forces.

On this day, near the fence that separates the Gaza Strip from Israel, 18 Palestinians were shot and killed by Israeli soldiers. It was the highest Palestinian death toll since the 2014 war between Israel and Hamas, when more than 2,000 Palestinians were killed, most of them civilians.

For observers of the Israeli-Palestinian conflict, indeed for anyone even remotely acquainted with it in recent years, this latest bloodshed might seem depressingly common — just another tragic episode of what is often characterized as a cycle of violence.

But what happened in Gaza last Friday was, in fact, quite different from what many people might assume. While the violence has dominated the news headlines, it is not the only big story from that day.

The deaths of 18 Palestinians should not distract all attention away from the fact that tens of thousands of Palestinians had gathered at six different places near the border between Gaza and Israel in peaceful protest.

They were protesting Israel’s ongoing blockade of the small crowded coastal enclave now in its 12th year. They were calling attention to the resulting humanitarian crisis in Gaza. And they were demanding that Palestinian refugees and their descendants (who make up roughly two-thirds of Gaza’s 1.9 million population) be allowed to return to their former homes and reclaim their lands in Israel.

An estimated 35,000 Palestinians participated in this protest, including many families who picnicked in several large tent encampments that had been set up hundreds of meters from the border fence. The vast majority of the protesters were unarmed and nonviolent.

Only a relatively small number of them — mainly young men — hurled stones and Molotov cocktails at Israeli soldiers and rolled burning tires toward them. Just a few approached the fence and tried to damage or breach it.

Although it was not completely peaceful, this mostly nonviolent mass protest by Gazans is just the beginning of a six-week campaign of nonviolent popular protests that organizers have called the “Great March of Return.”

The campaign will culminate on May 15, which Palestinians commemorate as “Nakba Day.” The Nakba, meaning “catastrophe” in Arabic, refers to Israel’s founding in 1948 and the expulsion and dispossession of Palestinians that accompanied it.

This is by no means the first time that Palestinians have staged mass protests or used nonviolent tactics — what they call “popular resistance” — to confront and challenge Israel and raise international awareness about their plight.

Most famously they did this during the first Palestinian intifada (1987-1993), which began in Gaza in December 1987.

Palestinians, in other words, have a long history of nonviolent popular protests, so there is nothing really new about the current campaign in Gaza.

What is new, however, and potentially very significant, is the involvement of Hamas, the militant Palestinian Islamist group that has controlled the Gaza Strip since 2007.

Israel, the United States and the European Union all classify Hamas as a terrorist organization. There’s good reason for that, given Hamas’ track record of indiscriminate violence against Israelis, including dozens of suicide bombings during the second intifada and the launching of thousands of rockets into Israel since then.

Hamas is more than just a terrorist group. It is also a political party and a social service organization that funds hospitals, clinics, schools, orphanages and soup kitchens. But violence against Israel, including Israeli civilians, has always been a core component of its ideology and strategy, and, you might say, its “brand.”

Hamas shows no signs of abandoning its armed struggle against Israel. Its new “policy document,” issued last year, still emphasizes “armed resistance,” just as its 1988 founding charter did. Its military wing, the Izz ad-Din al-Qassam Brigades, continues to prepare and build up its arsenal for the next round of warfare with Israel.

But Hamas’ willingness to endorse and actively promote the so-called “Great March of Return” campaign, which was initiated by independent Palestinian activists in Gaza, suggests that it might be shifting its tactics away from relying upon violence, since that has proven to be disastrous for Gazans and ineffective for Hamas.

Instead of firing rockets (that Israel’s Iron Dome system can intercept), or using underground tunnels to ambush and capture Israeli soldiers or carry out terror attacks (which Israel’s new anti-tunnel system can now detect and destroy), Hamas has, at least for now, apparently embraced mass protests as a relatively peaceful means to challenge Israel’s blockade of Gaza and, it hopes, delegitimize Israel in the eyes of the world.

This allows Hamas to avoid a costly and destructive war with Israel. Another war would not only be unpopular among Gazans and unappealing to Hamas’ allies, Qatar and Turkey. It would also be potentially fatal to Hamas’ ability to remain in control of Gaza and its ambition to eventually take over the West Bank as well.

If Hamas can continue to mobilize tens of thousands of Palestinians to protest against Israel on a weekly basis, then it can ensure that the blockade of Gaza receives much more attention in international media and is placed higher on the diplomatic agenda of the international community.

For Israel, Hamas’ new tactic represents a completely different challenge than the military and terrorist threat that it has long been accustomed to and which it has largely succeeded in containing.

There is no high-tech Israeli answer to masses of unarmed Palestinian protesters congregating at Israel’s border fence or even trying to swarm over it. Israeli soldiers are ill prepared and ill-equipped for this kind of confrontation, as last Friday’s killings arguably demonstrated.

However much Israeli officials insist that Palestinian protesters are really terrorists trying to infiltrate into Israel, many people and many governments around the world are likely to sympathize more with the long-suffering Gazans, isolated and impoverished, than with Israel, especially when its troops fire live ammunition at demonstrators.

Mass demonstrations and marches by Palestinians are, in short, if nothing else, a public relations nightmare for Israel.

No wonder, then, that Hamas leader Ismail Haniyeh declared after last Friday: “We wish to tell the world that the March of Return was peaceful and civilized, and women, youths, children and elderly participated in it.”

The fact that this was not entirely true is beside the point. What matters more is how the world perceives the protest, and whether more of these popular protests, on a similar scale or larger, will take place over the coming weeks.