Trump insisted that he didn't know about Cohen's $130,000 payment to Daniels — which, for him, is a bad thing 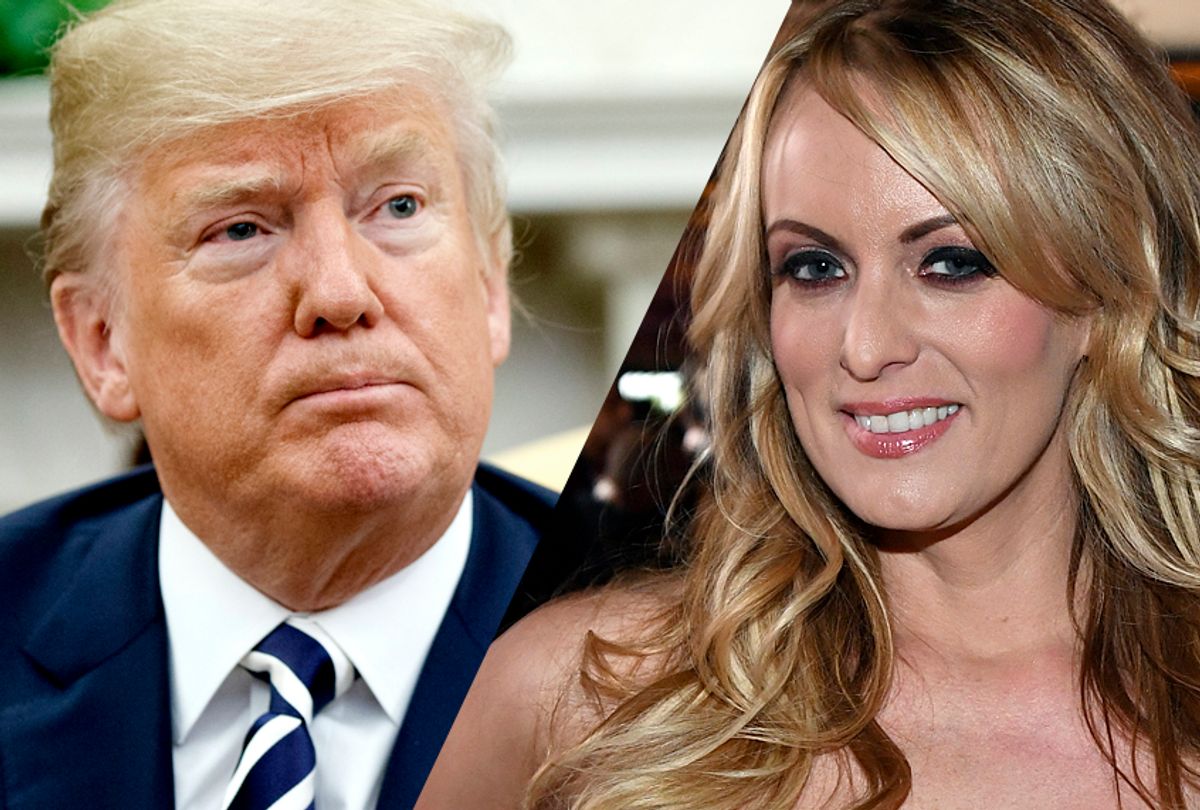 Speaking with reporters about whether he knew that his lawyer, Michael Cohen, had made a $130,000 payment to Stormy Daniels (real name: Stephanie Clifford), Trump answered resoundingly in the negative, according to The New York Times.

After answering "No" to the question on whether he knew about the payment, Trump told the reporter that she would need to speak with Cohen about why the payment was made in the first place if it wasn't to protect him from the revelation of an affair.

Trump was then asked if he knew where Cohen got the money to make the payment, responding by saying "No, I don't know."

If Trump is telling the truth, his words could have major ramifications for the ongoing case between Daniels and the president. Daniels is already claiming that the nondisclosure agreement which she signed in return for the $130,000 payment is null and void because the president himself didn't affix his signature to the document. Trump's declaration that he didn't know about the payment would seem to confirm that aspect of her story.

"You can't have an agreement when one party claims that they knew nothing about the agreement and did not sign the agreement," Michael Avenatti, Daniels' lawyer, told Salon.

Regarding the next steps to be taken by Daniels' legal team, Avenatti said that "we're filing our opposition to their motion to compel arbitration on Monday. We'll be renewing our motion to compel the deposition of Mr. Trump and Michael Cohen."

This was similar to observations that Avenatti made both on Twitter.

A professor of contract law at Georgetown University had a similar observation.

"Nothing in the contract, and nothing in his remarks, suggests that he had given Cohen the right to make binding commitments on his behalf," David Super told The Washington Post in an email. "With these comments, we are almost certain to see this litigation play out in a public court case rather than in private arbitration."

The reference to public court versus private arbitration refers to one of the key details of the Trump-Daniels saga. One clause in the nondisclosure agreement signed by Daniels requires disputes from that contract be mediated through private arbitration instead of open court. The underlying reason is that, although court cases are public, private arbitration proceedings are confidential. While Trump and Cohen have both filed court documents attempting to enforce that clause, the president's comments may make it harder for them to convincingly do so.

Of course, the mere fact that Trump and Cohen are still pushing for the case to be addressed through private arbitration still puts the president in a potentially embarrassing position.

"Unfortunately, arbitration is able to generally ensure that people can't tell the truth and can't talk to the media," Amanda Werner, a lawyer who tracks arbitration issues for the liberal group Public Justice, told USA Today in March. "But in this case, it's just really hard to enforce without further incriminating the president. He's kind of stuck in a tough situation here, but I think it's hopefully going to help the truth come out."

There are also potential ramifications to Trump's statement related to election.

"It's significant. One of the questions that had been unresolved until yesterday was whether Mr. Cohen had essentially just fronted the money and been repaid by the candidate," Adav Noti, senior director of trial litigation at the Campaign Legal Center and previously associate general counsel for policy at the Federal Election Commission, told Salon. "Cohen had said that he wasn't by the Trump Organization or the Trump campaign, but he had been a little vague about whether the candidate had repaid him. There is no limit on how much a candidate can spend on their own election, so if in fact the candidate had paid $130,000, we still would have had a reporting violation but it wouldn't have been otherwise illegal."

Trump's comment also marks an unusual stance for him regarding the Daniels case. Despite normally being voluble on a wide range of subjects, from the profound to the trivial, the president has been notable for his uncharacteristic silence when it comes to Daniels' accusations. As a result, his willingness to speak publicly about the Daniels case for the first time has raised questions about why he chose this moment to do so.

"My experience in covering Trump is that the simplest answer is almost always the right one," Chris Cillizza of CNN wrote. "And the simplest answer is this: Trump was in a good mood. He was feeling his oats. So he figured he would pop back into the main cabin and chat with reporters for a few minutes. He likely didn't even think about what sort of questions he would be asked."

There are also important dimensions to this story involving Cohen's work for Trump. For one thing, if Cohen did pay for that money out of his own pocket and without Trump's knowledge, that would constitute an in-kind contribution to Trump's campaign of $130,000, far above the legal individual limit of $2,700. For another, if Trump is telling the truth, it raises questions about the exact nature of Cohen's responsibilities with the Trump campaign.

"Did Cohen have general authorization to make settlements with women who had affairs with Trump? If so, how many women were involved? What were the sums paid out? Did any women allege sexual harassment or sexual assault (i.e., unwanted sexual conduct)? Where did the money come from?" Jennifer Rubin of The Washington Post writes. "We know during the campaign that more than a dozen women came forward with such claims. These women apparently didn’t have settlement deals with nondisclosure agreements, but perhaps Cohen did not know about them or did not believe their stories."

Norm Eisen, a senior fellow at the Brookings Institute, pointed out to the Post that this story also has serious implications for Cohen's legal career.

"Trump’s statement also makes things much worse for his lawyer, Mr. Cohen. Legal ethics rules prohibit settling disputes without informing your client, and lending or giving your client large sums of money to fund such settlements. An investigation by the New York state bar of Cohen just became a lot more likely," Eisen told the Post.