Mississippi's flag is one of many ways the state honors its Confederate legacy. Progressives hope to end all that 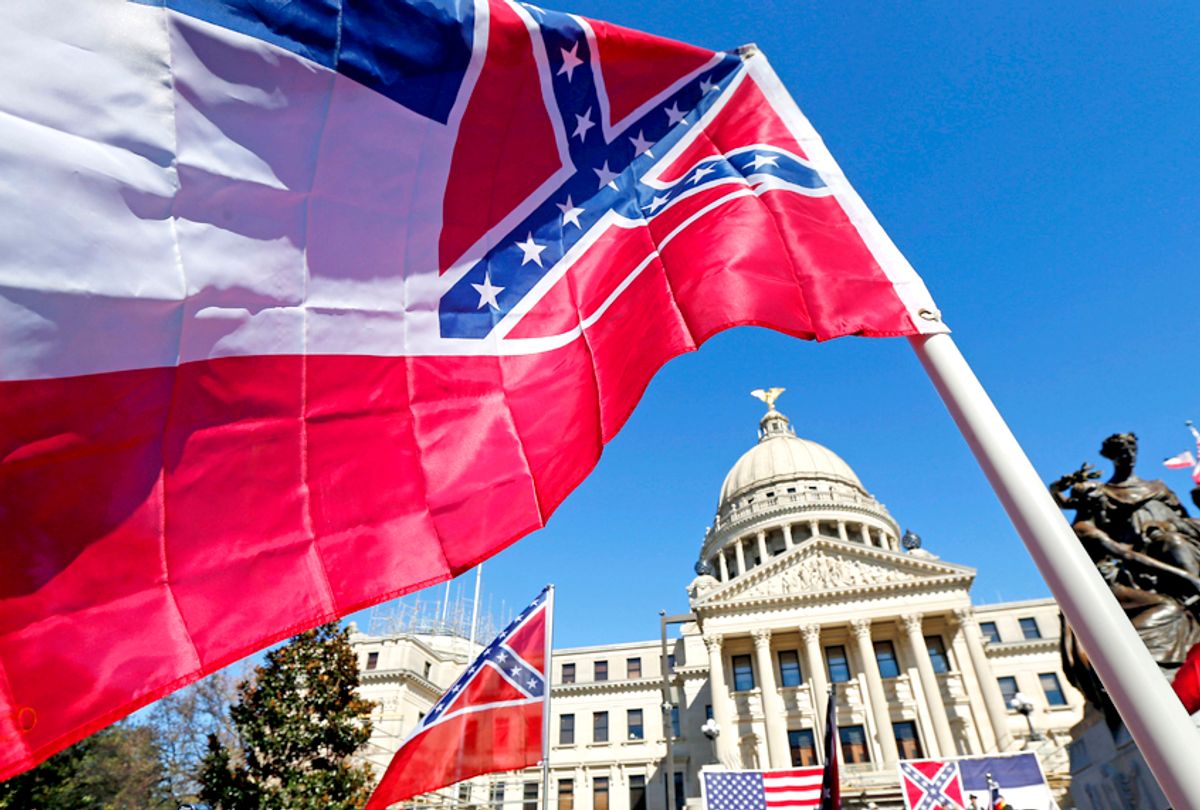 The recent escalation of efforts to remove historical tributes to white supremacy — usually in the form of Confederate statues or flags — has been met with virulent, even violent resistance. The most famous example, of course, is the violence that erupted in Charlottesville, Virginia, last August, when a group of neo-Nazis and other white supremacists descended on the city, nominally to protest the decision to remove a statue of Confederate general Robert E. Lee from a city park. But many anti-racist activists and politicians across the country have been fighting an uphill battle in their attempts to take down public memorials to racist oppression.

Nowhere is the battle harder, or uglier, than in Mississippi, whose government has been so devoted to honoring white supremacy that the state flag, chosen in 1894 during an escalation of racist violence in the region, incorporates the Confederate battle flag in its design. It's the last state flag to do so directly, after Georgia adopted a new flag in 2003. (Arguably, the flags of Alabama, Arkansas and Florida still contain Confederate symbols, but not the infamous battle flag.)

Ever since Dylann Roof, a white supremacist who fetishized the Confederacy, murdered nine people in a black church in South Carolina in 2016, there has been an uptick in efforts to get the Mississippi flag changed, or at least to convince institutions in the state not to fly it.

On Wednesday, a progressive group called the Mississippi Rising Coalition sued the city of Ocean Springs, just east of Biloxi on Mississippi's Gulf Coast, demanding that the Republican mayor, Shea Dobson, and the all-white city council stop flying the state flag on public property. The previous mayor, Democrat Connie Moran, had not flown the flag and said she could not remember the last time it had been flown. But after Dobson took over, he immediately ordered the flag to be flown again. While he waffled on the issue after facing protests, Dobson ultimately stood aside as the town's board of aldermen voted to keep it up.

“Under this flag, more than 581 people of color and otherwise have been lynched. This flag represents hate," TNathan Fairley, a board member of the Mississippi Rising Coalition, said during a press conference announcing the lawsuit.

The group has received threats, including a video threat sent by the Ku Klux Klan, for their efforts to convince the city to take down the flag.

"At least the Klan are not hypocrites," Curley Clark, the head of the Jackson County NAACP, said during the press conference. "On the other hand, the mayor and the board claim not to be racist, but their actions speak otherwise."

The choice to fly the state flag, after a lengthy period of not doing so, must be understood in context of the statewide push by progressives, successful in many cases, to take the flag down. Cities like Tupelo and Cleveland have stopped flying the flag, as has the University of Southern Mississippi. In reaction, a pro-flag group called the Delta Flaggers has formed, targeting not just the university but even the Mississippi Civil Rights Museum with protests for their unwillingness to fly a banner honoring white supremacy.

"A lot of people say, what difference does it make, changing the flag? That’s not going to eliminate racism or white supremacy," Jemar Tisby, the president of a black Christian collective called The Witness and resident of Jackson, said. "But our symbols are important, particularly a state flag, which is supposed to represent all of the citizens in a particular state."

Democrats in the Mississippi state legislature this year brought forward a number of measures meant to remove symbols of white supremacy from the state iconography. On top of bills to change the flag, there were bill proposing to replace a statue of Confederate Col. James Zachariah George with either blues singer B.B. King or civil rights legend Fannie Lou Hamer.

There was a particularly keen interest in replacing the state song, "Go, Mississippi," which was adopted in 1962 and had the same melody as the 1959 campaign song of then-Gov. Ross Barnett, elected on a segregationist platform. The original song, "Roll With Ross," had these lyrics:

He's for segregation, 100 percent
He's not a moderate, like some other gent
He'll fight integration, with forceful intent
Roll with Ross, roll with Ross, he's his own boss

In "Go, Mississippi," the lyrics are changed to:

Some of the songs proposed as replacements were "Mississippi Beautiful" by Pam Confer, "Miss The Mississippi and You," by Jimmie Rodgers and "Cross Road Blues," by blues legend Robert Johnson.

"We could be an inclusive state where the brightest of minds want to come to live and work," Jeramey Anderson, a Democratic state legislator who is now running for Congress, told Salon by email. "Nothing will ever change or erase Mississippi’s history. However, there are things we can do now, both literally and symbolically, that will move us up from the bottom and showcase all the things that make us great.”

"It’s not politically expedient for any Republicans in particular to advocate for changing the flag or the state song or any of the Confederate symbolism that riddles the entire state," Tisby said. "That would alienate a very vocal and politically active portion of the constituency."

Still, activists in the state keep pushing, using the #TakeItDownMS hashtag on social media and pressuring local governments and institutions to remove the flag. Tisby believes the campaign would have a better chance of success if people outside Mississippi also joined the fight.

"I think with Mississippi, there should be national pressure," he said. "I don’t think, when you walk through the halls of Congress and you see the Mississippi state flag, any person from any state should be comfortable with that."

There has been some pressure from the outside. Since 2001, the NCAA has banned predetermined championship games from being held in states that fly the Confederate flag, including Mississippi. During the Democratic National Convention in 2016, the city Philadelphia took the Mississippi flag off the ceremonial Avenue of the States. Inside the convention arena, the Mississippi delegation took the flag down themselves.

"There needs to be even more pressure brought on," Tisby said. "Historically, that’s the only way Mississippi has changed."

Many activists, and indeed many Americans, would argue that the Confederate battle flag should carry just as much stigma as the Nazi swastika. It will clearly take years of effort to get to that point. But people who have fought against racism -- in the American South or anywhere else -- know the meaning of patience. The campaign to change how Americans view our shameful history of slavery and white supremacy is not going away.