The zen of Henry Winkler, star of HBO's "Barry"

Enjoy this uplifting conversation with the TV star about co-starring with Bill Hader, and fandom 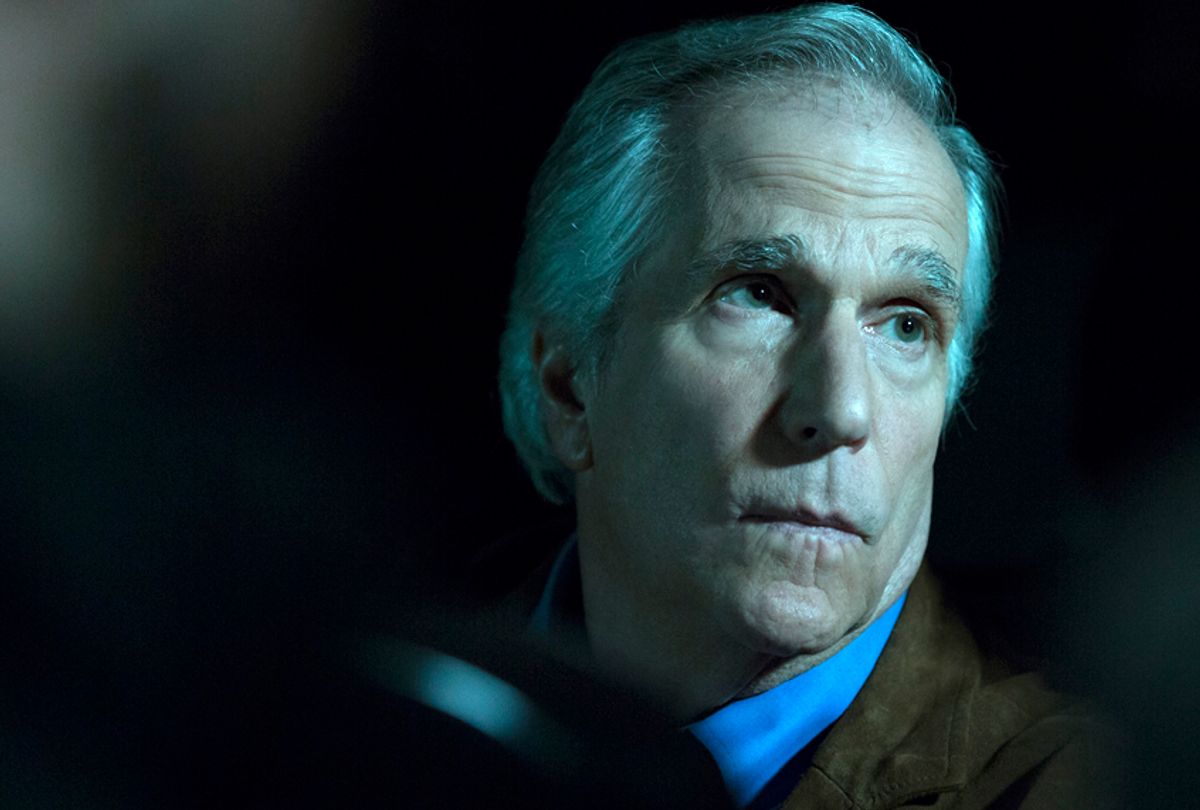 Henry Winkler has welcomed me, a stranger, into his orbit. The setting is a hotel room at a press junket, and yet, he treats it like his living room. Welcome, he says. He gestures to a fruit platter on a table, invites me to sit where I’d be most comfortable, and would I like another pillow? A blanket?

This is the man I knew as The Fonz, hero of “Happy Days,” Jumper of Sharks. Now he’s co-starring on HBO’s black comedy “Barry,” a project co-created by “Saturday Night Live” alumnus Bill Hader airing Sundays at 10:30 p.m. And he just may be the nicest, most contented man in Hollywood.

Hader plays the title role of "Barry," an assassin attempting to find his humanity again through an acting class run by Winkler's Gene Cousineau, a drama teacher given to pulling extremes out of his students.

After Hader, Winkler is the second most recognizable actor on the series and is the series' most frequent scene stealer. Surprisingly, though, he had to audition for "Barry" just like anything else.

Winkler imbues every word of that story with tension and portent, and as much care as he assigns to welcoming a stranger into his home away from home.

“It turned out to be the plum role of the year,” he effused.

“Barry” defies simple description. It’s a weird, funny, dark work that eventually devolves into full-midnight tragedy. All the while Winkler’s drama teacher maintains his loony devotion to his sense of gravity and vainglory. In the world of Gene Cousineau every moment bursts with import, every act is part of the great drama of life.

This is also true of Winkler, a man whose enthusiasm and sense of good fortune vibrates in every word he says. Gene’s motivation is fame and a bathing in the cult-like worship of his students, and that’s the difference. Gene feeds on fandom, while Winkler is a fan and devoted to kindness. He tweets. He loves pop stars. And he loves meeting people.

This is why a recent conversation that was ostensibly supposed to be about “Barry” soon turned into an inspirational reflection on life philosophy and the dividends yielded by being kind, revealing much more about the actor than the bombastic character he plays. Bear that in mind as you continue reading this conversation that has been lightly edited for clarity.

Let's talk about “Barry” and Gene Cousineau. When you came into this, how much were you able to kind of shape Gene?

You're able to shape a character because you bring your imagination, and you bring your energy, and you bring your knowledge of acting class. But here it is. These two men, two halves, make a circle that is so clear and so perfectly round. If it is not in the writing, it doesn't exist. You can try, you can ad-lib, you can wear pink underwear, it's not gonna be great.

These guys know what they want. They are open and allow me to try things that just come out of my mouth. And then they know that they want it done a very specific way in another area. And it is the perfect combo. It's cashmere. It's like putting on a cashmere sweater, as opposed to a blend.

I'm proud of myself for that analogy, myself. I'm loving it!

I've never actually said that before!

— Gene Cousineau is such a larger-than-life character, and yet very thoughtful and devoted to what he does and where he is. This is set against and in complement with Bill Hader's character, this kind of soul-searching assassin.

I still don't know how these men have an acting class comedy, a romance, a teacher who has a romance with the cop, and a shoot-'em-up, a dark, deadly shoot-'em-up, and how that gets squeezed into a half an hour. I have no idea. I think it's like spirits in the forest. I think it's alchemy. I don't know what they did. I'm just so grateful to be part of it.

How did they approach you for this?

My agent called, said, "Would you like to go in and read for Bill Hader?" Bill Hader? I love Bill Hader. I've watched Bill Hader. We watch him every Saturday night. I said, "Who's on this list? Because if Al Pacino is on this list, I'm not going in. Because I don't have a shot!”

It really does surprise me that you would think, "Well, who else is on there because if so and so is on there, I'm not going to get it." From an outsider, that does not compute for me.

Interesting. What do you think it is that brought you to where you are now, in terms of your current abilities as an actor?

That I have grown up as an emotional person. I thought I was a person, but who I thought I was, was not the reality. And it took looking and reading and talking and . . . to get there. You know? I read . . . I was a negative thinker, and there is a disciple of a philosopher from Armenia. And out of this big book, "Don't put a period on the end of a negative thought that comes into your head." If you finish the thought, it will grow and stump you.

You just say, "Move it out." And move in something you like. I like chocolate cake without frosting, like a bundt cake. I think of a good chocolate bundt cake. Rearranges your thinking, and you keep moving, and then we're sitting here talking.

One of my favorite stories about you that I have heard is that when people come up to you and say, "Hey!" as Arthur Fonzarelli, each time you treat the person nicely. And you always explain, "Remember for you it's the 500th time, but for that person it's the first."

Yes, that's right. Not only that, if a human being is gonna give you a half an hour every week for 10 years, and then they come and they meet you and they want to say hello, and you say, "I am so sorry, I've got no time for you," you are a liar. You are a liar. Because if you look at somebody, a fan on the street, and you look for three seconds in their eyes, they think they've met you. How hard is that? Especially if they've paid money for your ticket, they've come to see you on Broadway, they have your books for their children, and they watch you on television.

I think that that's one of those things that people don't quite understand. And when I say people, I mean people who are celebrities, but also fans. I think that there are so many reports now of people who have these interactions with people who are on TV or in movies, and maybe they're kind of seen like, "Oh, maybe I should stay away from that person." But the fact that there's a humanity in the story about you is what resonates.

We tell stories. . . . I enjoy that a lot. I love meeting people that I like to watch. I watch a lot of television. It helps me relax. I do a lot of different jobs. And when I see somebody on a show that I like, I become a 14-year-old girl. I become a screamer. I get so excited. I'm not kidding.

I met Sia the other day. I mean, I walk into a grocery store, and Judd Apatow is there. And I know him, but I don't really know him. And I went up and shook his hand, and a woman comes up and says, "I'm Sia." Because I tweet about her. I talk about her. I love her. "I'm Sia." And I'm speechless and all I can do is hug her. And then the three of us spent like half an hour talking, chatting. I said, "I know I can't take a picture of you because you always wear the --" She said, "No, I'm gonna make an exception." I took a picture with Sia.

And you have that close to your heart?

I do. I have a signed picture from Bruno Mars. I love Bruno. I do. I get crazy when I meet people I like. I, of course, met Elton John and said, "John, I had -- I'm just gonna leave now because I called you John and your name is Elton."

How much of a fan of Bill Hader's were you before you?

Every Saturday night. “Trainwreck.” “Skeleton Twins.” And here I am, he's my friend, and my boss, and my acting partner.

Pretty great! . . . If you let it happen, life will unfold in the most magical way. But, it doesn't just come out of the thin air. You have to prepare yourself and train yourself and put yourself out there. And here's the thing. You didn't ask, but here it is: The anticipatory fear of something is worse than the actual doing of it. I think that is like one of the most important things I've learned in my life.