Sandra Oh and Jodie Comer star in this alluring thriller about the good, the bad and the deadly sides of women 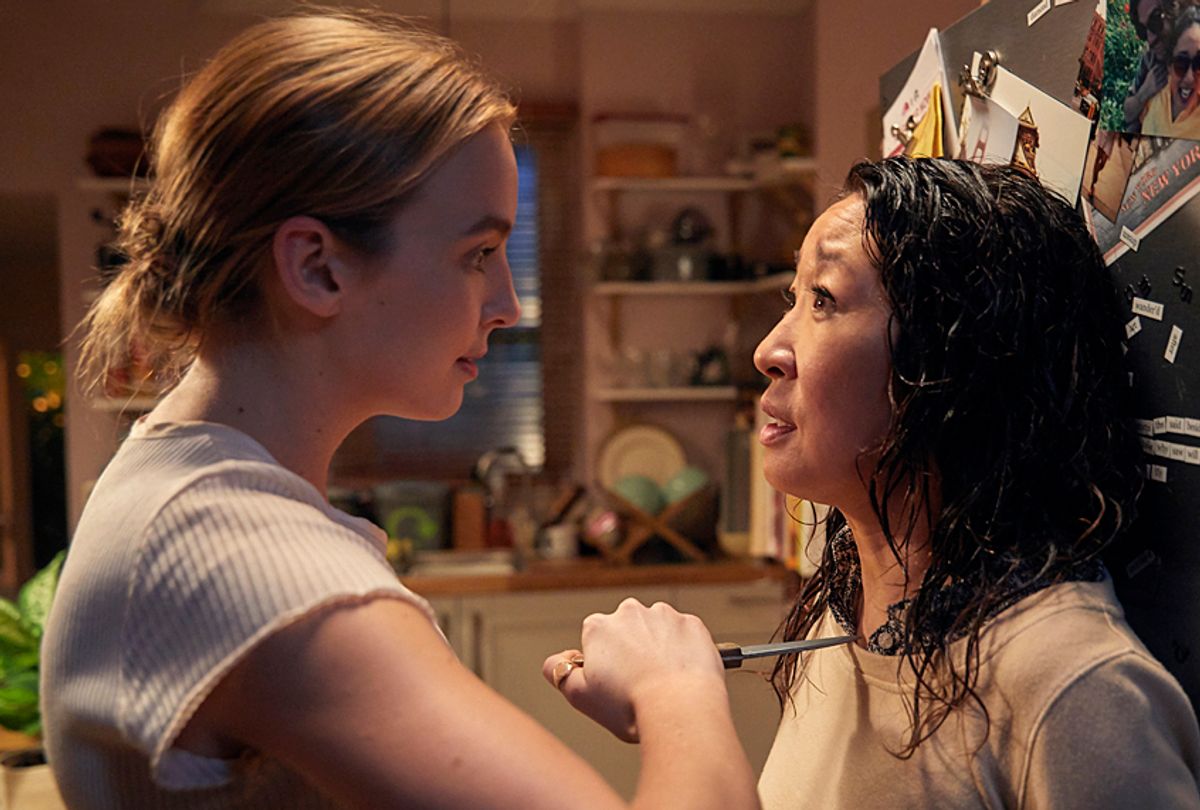 BBC America’s “Killing Eve” is a gorgeous scoop of sinister. That pretty much hits you from the very first view of Villanelle (Jodie Comer), a gleefully unrepentant assassin with a taste for life’s finer things. In Paris, she is savoring a dish of ice cream as a little girl sitting at a nearby table observes her.

Everyone has their version of this moment the child is experiencing, that glimpse of someone who represents a possibility of what could be in store, of who we might become. It’s a little like falling in love, actually. Women do it all the time, and mostly with other women.

As the chubby-cheeked little girl regards the chic woman with fascination, and Villanelle meets her stare, we recognize this innocent platonic flirtation for what it is. The child smiles, and Villanelle notices an onlooker’s grinning reaction to the silent exchange and coaxes forth a gamine’s grin in response.

Then Villanelle does something selfish and entirely unnecessary, perhaps to prove how dangerous beguilement can be, though it’s more likely because she knows she can get away with it. Cloaking herself in the couture of a proper lady enables her to get away with murder. Literally.

The nursery rhyme line warning “when she was bad, she was horrid” was written for women like Villanelle, a vision created by Phoebe Waller-Bridge and that Comer realizes with a formidable presence in her captivating new series, debuting Sunday at 8 p.m.

In reality “Killing Eve” belongs to Sandra Oh, owning her charisma completely as Eve Polastri, the balance to Comer’s killer. As the series starts her Eve is a stammering mess, easily flustered, afraid to offend and reluctant to shine. Later on she crosses paths with Villanelle, who makes her punch glass for the hell of it, and regret it immediately.

Eve is good in all the ways Villanelle is defiant, and so far it has gained the MI5 agent very little. She dresses simply, doesn’t outshine her boss and is relegated to desk jockey status. Her instincts grant her a distinct level of insight into cases that others lack, but she’s frequently dismissed nevertheless, especially when she suggests that a baffling murder of a misogynist and a sex trafficker was committed by a woman.

Eve’s determination and her insatiable curiosity vexes her superiors — all men, naturally — save for one female senior operative, Carolyn (Fiona Shaw). When these women join forces to hunt Villanelle, the threat escalates almost immediately because only they believe in Villanelle’s lethal potential. In turn, Villanelle grows bolder and less careful when she realizes that, at long last, somebody sees her.

“Killing Eve” has been renewed for a second season before the first of season 1’s eight episodes has debuted. Such a feat means little in these days of high-volume content production -- more of an indicator of network confidence than a guarantee of quality.

But BBC America is right to sense that it has something different in “Killing Eve” and its relevance to women in this time. Although based on a series of novellas written by a man, Luke Jennings, Waller-Bridge and the cast have created an assured scrutiny of all the irritants women have to contend with, the rage they have to swallow, at any given moment.

Eve and Villanelle are women whose desires and ambitions have little to do with the men in their lives. Indeed, their desires and ambitions annoy the men around them. Their bosses are patronizing and detest their efforts to think freely. Eve has a devoted husband whose patience is pressed to the limit, and who soon chafes at knowing he is less important than her work. Villanelle is more fortunate in that regard: a solo act and psychopath, she loves only herself if she can love anyone or anything at all.

At first, Oh lends her role the air of a woman dragged down and held back by patronizing bureaucracy and sexism. But as the hunt intensifies during a gallop through a number of European cities, and the distance between Eve and Villanelle shortens, the actress enlivens Eve with a quiet yet substantive wrath that engulfs the screen.

Comer, last seen starring in “The White Princess,” is spiky and luminous here, making Villanelle as impetuous and calculating as Eve is solid. Her assassin is a glass vessel, deceptively fragile and harmless looking but all sharp points and slicing edges when struck or dropped. She also bathes her role in a playful insouciance, taking joy in her vices and utter lack of virtues. The viewer, meanwhile, can only be impressed by her extraordinary taste. A major source of Eve’s fascination with Villanelle is the criminal’s flair for fashion and the stylishness of her crimes. It takes no time at all for us to understand.

Enjoying “Killing Eve” for the wickedness of its narrative, its tart and caustic humor and the exciting run-down is a simple enough proposition. All of those components are satisfying, and both Oh and Comer turn in substantial performances, making the most of their screen time both separately and together — particularly together. The editing, cinematography and soundtrack of “Killing Eve” capture the brio of Waller-Bridges’ singular view of womanhood in all of its facets, though the central tension really comes from the interplay of the classic good-girl-and-bad-girl dynamic, how each complements and seeks to destroy the other.

Whether by Jennings’ design or Waller-Bridges’ — I haven’t read the books — “Killing Eve” plays with the Judeo-Christian mythology of Eve and Lilith within the framework of a spy thriller. It’s in the names and it’s definitely present in the work dynamics each woman contends with; even the assassin, with her freedom, has a handler who treats her like a child. The difference is that instead of allowing that to rankle her, she plays it to her advantage.

In these scenes, “Killing Eve” proves to be something more than a spy-versus-spy game. Twisted within its humor and spark is a prismatic depiction of the ways society aspires to render women invisible, except for the ways the patriarchy wishes them to be seen. Eve and Villanelle are savvy women who exploit that invisibility as a blind spot — Eve with her intellect, and the killer with her deceptive delicacy.

Where its creative energy peaks, “Killing Eve” becomes a savage dance between two women who see the truth of each other, each sizing up the other and, in an undeniably perverse way, loving the view.

The pull between these women is something beyond sexual. It might not be sensual. Animal may be the best way to describe it. Whatever you’d call it, Comer and Oh make us believe in their mutual obsession, delighting in the sparks they create at a distance and holding our breath in anticipation of the inevitable conflagration that would result from a meeting of these opposing forces.