My Tinder date in Thailand: What a vacation fling taught me

“So, about this island romance. Are you going to kiss me or what?” 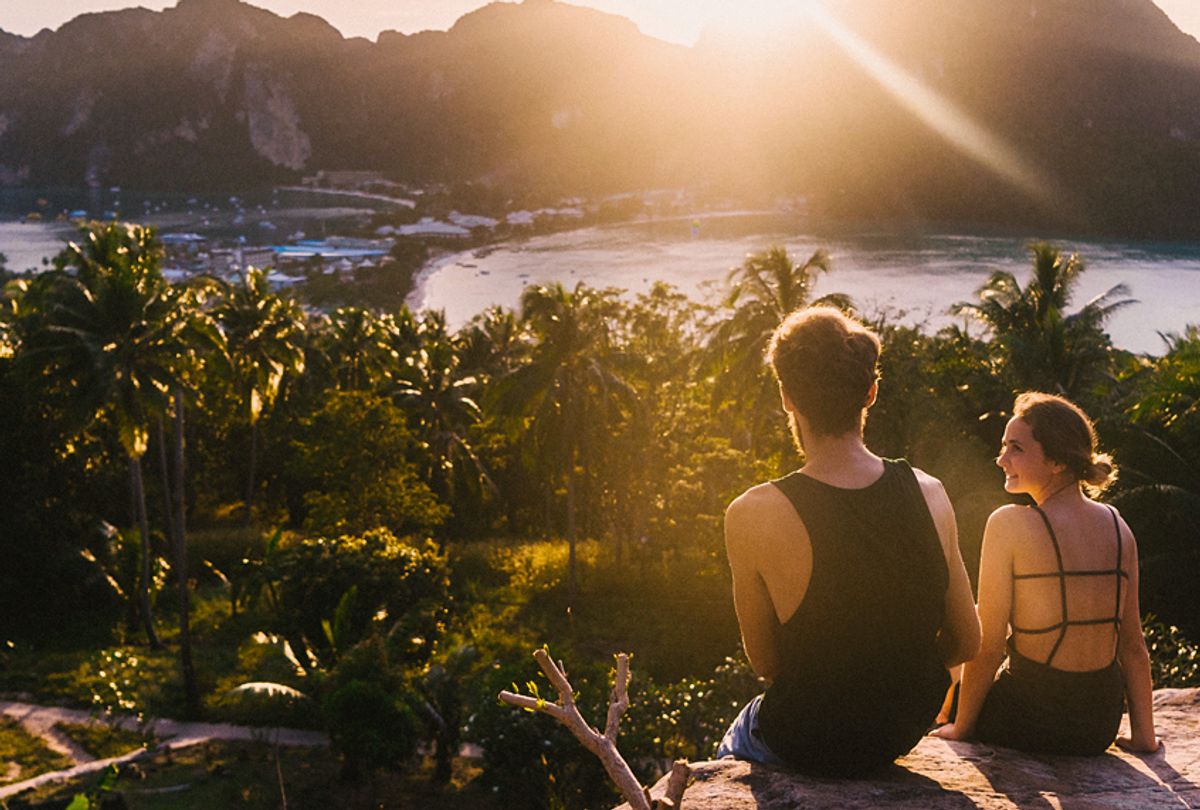 I was in a reggae bar owned by a passionate Bob Marley fan on the Thai Island of Koh Lanta when I befriended a couple of cigarette-smoking British girls. We swapped backpacking stories, but their tales included one anecdote mine was missing; I had built mud houses in the jungle and fended off scorpions, but I’d yet to experience a travel romance.

“How do you meet someone?” I inquired.

“Tinder,” they sang in their enviable accents.

A couple beers later, I was happily swiping. Eventually, I received a message from Daniel, an English guy who was backpacking Southeast Asia and, according to his profile, preferred coconut milk in his morning coffee.

“I’m in Koh Lanta for a very limited time. Fancy being my island romance?” he wrote.

The British girls weren’t kidding. Tinder really was a trove of men looking for a travel romance. After a few flirty messages back and forth, I agreed to meet him at sunset on the beach the next day. I felt nervous when I first caught a glimpse of him across the street, and contemplated not following through -- so I stalled, standing on the curb, wondering, Was I really going to meet a Tinder date in Thailand? But this was 2016, after all, and it didn’t matter where in the world you were, Tinder was still a reliable place to find someone. I got ahold of my expectations, tossed them aside and walked over.

Daniel was tall and lanky with short brown hair and bright blue eyes. His gray shorts were a little long by traditional European standards, but he didn’t have a problem embracing his homeland’s quick wit. “I was wondering when you finally were going to come over here,” he taunted.

Our date started with traveler small talk. He told me about how he left his teaching job in China, and the trouble he got into in Indonesia. I reciprocated with stories about ending up on a hippie commune and my own failed attempt at teaching in Thailand. I told him that I had no tangible plans to return to California, despite what I had told friends and family back home. It wasn’t hard to bond over the lives we left.

After the ocean gobbled up the pink and orange sun, Daniel proposed we migrate to a less-crowded spot on the island, the secret cove. Eager to see the bioluminescent plankton, we hopped on a motorbike and zipped through the sticky air. Our 20-minute ride gave me a rush of the adrenaline I’d been living off for the last couple months. We carelessly twirled around corners, dodged monkeys, and relied on stars to guide us. One hundred descending steps later, we found ourselves the only ones seeking trouble. We sat on the shore and let the sea wash our dirty feet.

“So, about this island romance. Are you going to kiss me or what?” I asked.

My boldness had peaked, as expected, after traveling alone for a couple months. He grabbed the back of my head with just the right amount of force, and slowly pulled me in. I closed my eyes tightly as he kissed my salty lips. The moon was too bright to see the plankton that night, but we found another way to stay busy.

Daniel and I separated for a few days and reunited in Koh Tao, another Thai island, for one more adventurous night together. Koh Tao had a more picture-perfect atmosphere than Koh Lanta: whiter beaches, bluer water and pastel-green palm trees. A postcard for honeymooners.

“So, tell me something you’ve never shared with a date before,” I said.

“Isn’t the point of an island fling that we don’t get to know each other?”

Touché. Our arrangement was meant to be casual, as travel flings usually are, but a part of me wanted it to have an “Eat, Pray, Love” ending. Another part of me was tired of traveling alone and eager for companionship. The idea of having someone to do things with appealed to me, and if that included sex with a cute English man, even better. After dinner, we went to the bar across the street to play one round of beer pong. As he expected, I won, thanks to my American university roots. He balanced the scoreboard later by winning a game of pool.

During the next few days and nights, we played getting-to-know-you-games like “Would You Rather,” and “Never Have I Ever” while we soaked up the sun and happily drank out of coconuts. One day, we tried to stack our backpacks‚ and me, on his motorbike to move to another bungalow. Two minutes into our drive, he lost his balance and swerved to the right. We tilted over slowly enough to know what was happening, but not fast enough to stop it. A few minutes later, we clawed our way out from under a mountain of backpacks and spinning wheels, covered in blood and bruises.

Daniel and I bandaged up each other’s wounds. He cussed when I grazed his open sores with rubbing alcohol. He distracted me with jokes when the liquid touched mine. Later that night we relaxed with a happy cookie from our hostel bar. At first, we didn’t think there was marijuana in it, but then Daniel couldn’t feel his legs and I couldn’t stop laughing.

“One more night,” we kept saying. But “one more night” kept multiplying, until we got tired of counting. Still, for each night we spent together, we inched closer to our expiration date. I had already booked a ticket to Bali before we met.

In the moment, it was hard to understand the rush of emotions we were both experiencing in such a short period of time. We reached a level of openness that would usually take months to get to back home. In a week’s span, we found ourselves living together, sharing a bathroom, and arguing over what to eat for dinner. We had a morning routine. Daniel described the speed of our romance as a relationship bootcamp. I felt like I’d found myself in an arranged marriage. One night, we sat on a dimly lit porch watching the mosquitos dance to the music we shared with each other. Daniel liked heavy metal jams, and while I never grew an affinity for that genre, I considered adding them to my Spotify playlist for him.

Perhaps our expedited relationship was a consequence of heightened vulnerability travelers are plagued with regularly. On the road, you’re forced to take down the walls you’ve built around yourself, cemented by your own fears and insecurities. Daniel and I couldn’t hide behind our jobs, friends, exes and self-imposed expectations during the usually drawn-out indecisive dating phase. Our relationship lived in a parallel universe where the unfolding of intimacy wasn’t bound to the constraints of time and preconceived milestones. It also wasn’t tied to a committed future. We had the freedom to move with whatever came our way, unattached to the anxiety of the future and the responsibilities of our past.

I found this all very exciting. I liked being able to be myself, but also an idealized version of who I wanted to be, with someone who didn’t know the me from back home. He had never seen me with my hair straightened, or with makeup on. He had never seen how I laughed with my closest friends, or how I dealt with stress from the demands of everyday life. He only knew the free-spirited, backpacker me — a version of myself that felt right in the moment, but wasn’t exactly conducive to Western society, or so I thought.

On the eve of our last night, Daniel disappeared to take a late-night dip in the ocean. I followed him into the darkness, and watched him climb aboard a long-tail boat. He grabbed me under my armpits and lifted me over the rail. We spent the rest of the night swimming and wrestling under the moonlight. As we combed through the water with our fingers, we found what we had searched for on our first night together, the bioluminescent plankton. The mysterious creatures lit up around us like the stars in the sky.

The next morning, I teared up in the rare moment I had to myself in the shower. My heart felt heavy. I’d known the whole time that it would come to end, but I didn’t want to let go of our fantasy relationship that I knew had little hope of thriving in the real world.

Prior to meeting Daniel, I spent a day with a monk whose English name was Joe. We sat under the suffocating Thai sun to talk about Buddhism.

“What do you think the purpose of life is?” I asked in all seriousness.

“Everyone has a different life purpose,” he said. “But we must do our best to understand that everything is impermanent. Understanding that everything changes help us to let go of desires and attachments. Letting go allows us to be in the moment and be happy with what we have right now.”

Goodbyes have always created a heart-tightening sense of finality for me, and too many times I worried about them before they ever arrived. Joe got me thinking, though: Why did I always fear the end? What happens when I simply accept the time I was given with someone and let go?

Of course, that’s easier said than done. I resisted the end of my relationship with Daniel, and instead, I suggested that we meet up again. A few weeks later, after my short trip to Bali, we backpacked from Ho Chi Minh City to Hanoi in Vietnam for six weeks, and eventually Cambodia for another two — after spending some time apart again.

One night on the Cambodian island of Koh Rong, a few travelers invited us to see the bioluminescent plankton. Daniel insisted we join. During our barefoot trek through the jungle, a sharp stick stubbed my toe. I couldn’t see the damage, but I started to limp.

“Quit being so dramatic,” he yelled at me as I struggled to keep up.

I sat on a log while he frolicked into the water with his new friends without me. Like any flailing relationship, the warning signs accumulated until they could no longer be ignored.

This would be the beginning of our real end. Daniel’s resentment started to build, and so did mine. Our relationship no longer flowed, and each day it felt clearer that it had fizzled out.

We parted ways for good a week later, after a fight we had in a Cambodian movie theater.

In hindsight, a part of me wished I had never followed Daniel to Vietnam and then to Cambodia. A part of me believed he was right in being reluctant of intimacy. If we had left our affair in Thailand, I told myself, our memories together would have been warmer. I would have always thought of him as “the one who got away.”

Mary Oliver once wrote, “When it’s over, I want to say: all my life I was a bride married to amazement.” Two years later, when I look back on that adventure, the memories of the places I visited feel distant, almost nonexistent. I can’t remember the exotic smells or busy streets, as much as I can remember, let’s say, the joy I felt during the funniest moments Daniel and I shared, or the sadness I felt when we went our separate ways.

Even when you’ve embarked on a solo adventure abroad, to visit a foreign city, the people you meet become the adventure. Perhaps that’s because amazement in life lies in the moments we share with each other — the happy and the heartbreaking. The rest is just a backdrop.